The GOP primary is officially a horror film: Welcome to a world where Trump & Cruz are the last men standing 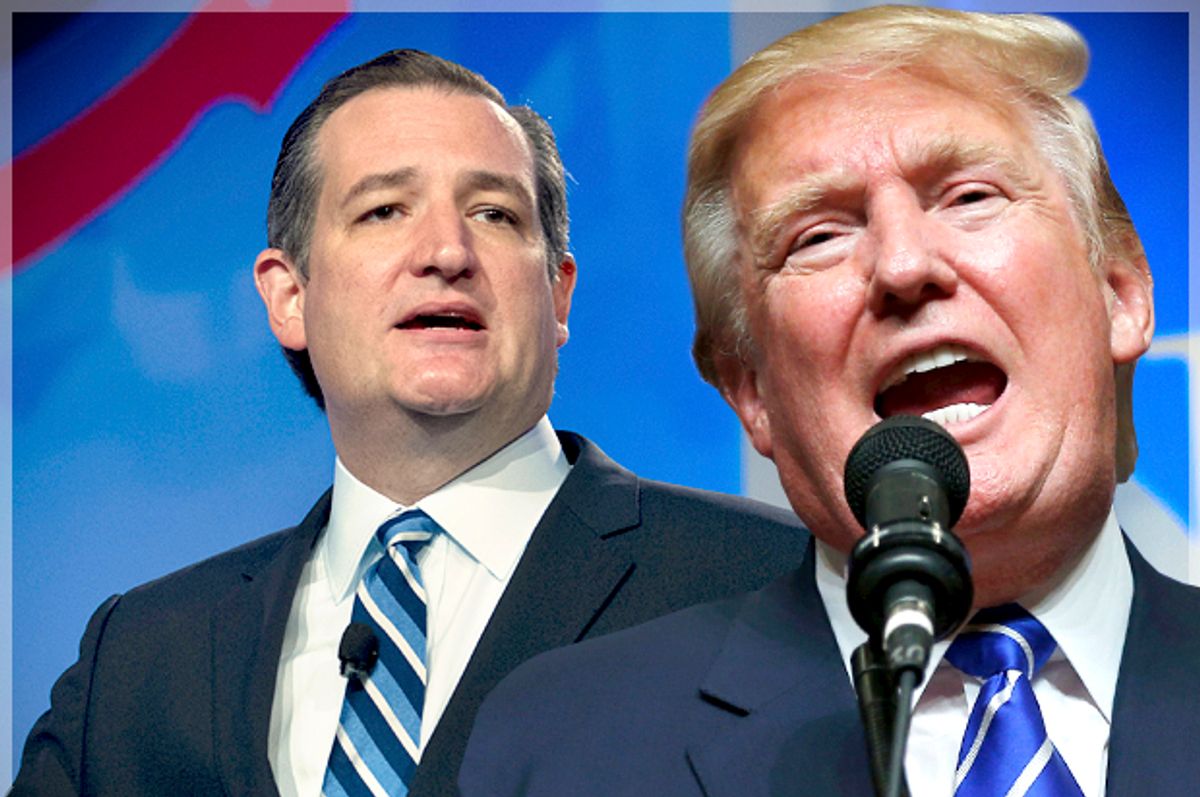 I've been writing about the Donald Trump phenomenon several times a week for seven months now. As his candidacy evolved from a bizarre spectacle to a serious campaign, it's become clear that this is a pivotal moment in American politics. It's not just that we have a shocking demagogue or a profane performer topping the polls in the Republican presidential race. It's the alarming notion that a crude authoritarian white nationalist is appealing to a very large section of the American people. Even worse is the realization that there is a path for him to actually win the presidency.

Last night he won the New Hampshire primary and he won decisively. His effect on the GOP electorate is already  profound:

Only 40 percent of New Hampshire Republicans support deporting millions of Latinos, so that's what passes for good news in all this. They didn't ask about summary execution or torture or killing terrorist suspects' families, but it stands to reason that at least the 35 percent who voted for Trump are for it. Those aren't the kind of issues people easily overlook when they vote for someone.

Most surprisingly, he won substantial support across all classes, educational status, gender and ideology. He is a true frontrunner now and is highly likely to gain support as people see him as actually able to pull it off. After all, he may be crude, but when you strip away the bluster, many of his proposals and promises -- particularly when it comes to law and order, immigration and national security -- are supported by a whole lot of Republicans.

Essentially, he has promised to kick out foreigners who are here, ban foreigners from coming here and beat foreigners that are "taking so much of our money." But then, if he and his followers believe real unemployment is possibly above 40 percent as he claimed last night, drastic action would understandably be in order. The number is completely daft, of course. He undoubtedly got it from sources like World Net Daily which commonly flog ridiculous statistics such as that.

Now that it's been determined that he is not going to implode any time soon, the question of whether anyone can stop him is more urgent than ever. His closest competition in New Hampshire was Ohio Gov. John Kasich with 16 percent of the vote, followed by Ted Cruz and Jeb Bush. At this writing Rubio was in 5th place after having admitted that he blew it over the weekend and promising never to do it again. He may not have the chance.

Kasich is an idiosyncratic candidate, highly dependent on Independents, who cannot vote in primaries in most places, so he's unlikely to be able to win anywhere else. (If he can get a rich benefactor to fill up his coffers maybe he can hang on for a bit and see what happens.) Bush and Rubio will likely stay in through South Carolina but it's very hard to see either of them making a serious move after flatlining in New Hampshire. In fact, with Rubio spinning out in glorious fashion, that three lane race coming out of Iowa -- conservative, establishment and Trump -- has merged back into two. It's as if Iowa didn't happen.

And this means the battle between the establishment, which hates Cruz and is coming to terms with Trump, and the conservative movement, which loves Cruz and is delicately handling Trump, is back on. Which one will stop the other? And which one is worse?

The Cruz supporters in the conservative media were out in force already soothing the troops last night:

Hugh Hewitt may be right about that. And there is plenty of friendly terrain ahead for Ted Cruz to gather his flock of social conservative and movement ideologues. He came in 3rd in New Hampshire but there were few expectations that he would do much better there, because it's not a state with a lot of evangelical voters. South Carolina, on the other hand, is filled with them. But it's also filled with hardcore movement conservatives, nativists, nationalists and every other permutation of conservative that exists in this country. It is a fiery right-wing state on every level. And in years gone by it's been where insurgent candidacies met their demise. The problem is that the frontrunner this year is an insurgent -- and so is his main rival. The ragtag band of "establishment" candidates that pull into Charleston over the next few days will not have the clout to take either one of them on, much less both.

So, it's a good bet that the GOP race is going to come down to either an authoritarian white nationalist or a far-right zealot. And the authoritarian white nationalist, the man who has convinced over two thirds of Republicans in New Hampshire that we need to ban Muslims from America, is the most likely winner. This is no longer a bizarre spectacle. It's a horror movie.