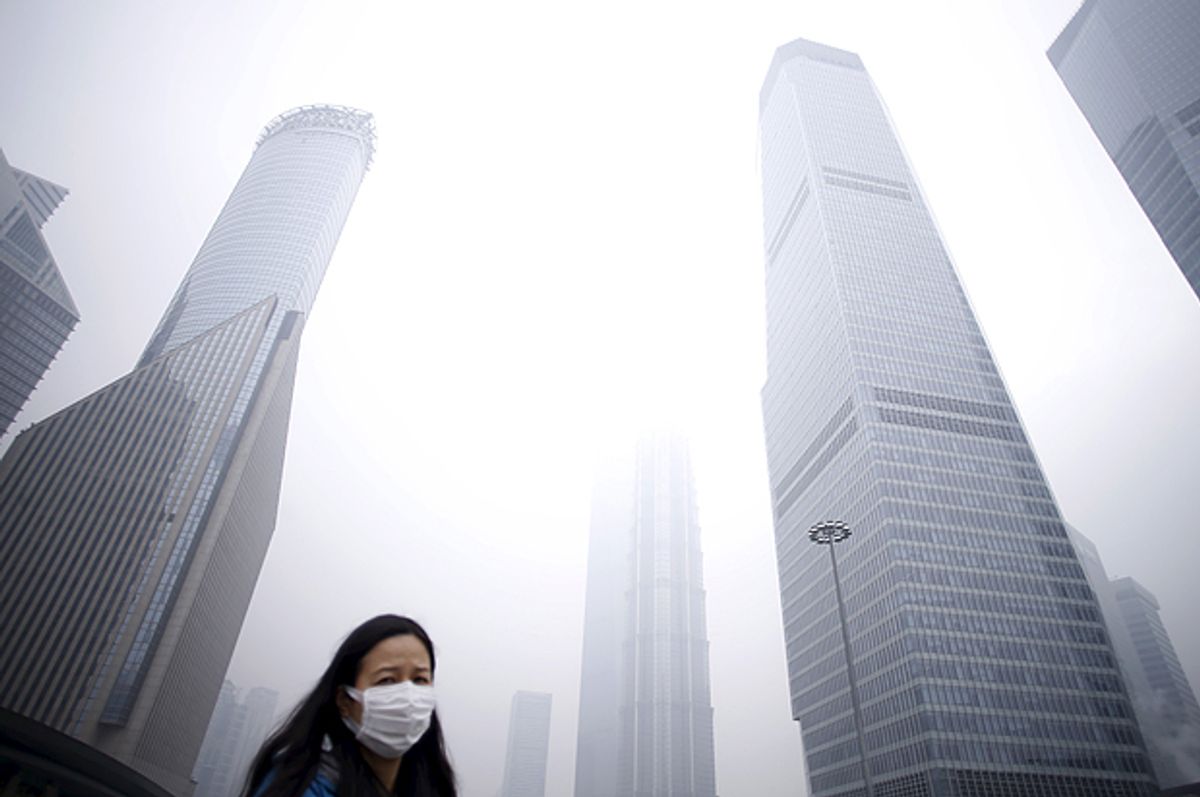 What’s missing from the way that our financial press reports about China’s economic slowdown is that it fails to take into account the role of the mainland’s people and the environment in how this crisis came to be. For too long this story has been told exclusively with quarter over quarter economic performance statistics by the myopic business press, which ignores entirely the deeper ecological crisis and intense social upheaval that has been underway in China  for years.

There are serious and profound consequences from China’s over-the-top drive to be the world’s factory, and global investors' greed to extract as much as they could in the way of a double-digit rate of return in the process. The truth is, our investor class did not care, and still doesn’t care, how China makes its numbers as long as it makes them.

The real-world consequence won’t make it on Bloomberg’s 24-7 watch your money-a-thon. Those talking heads have a working presumption that there is absolutely no connection between the markets' insatiable hunt for the next billion-dollar killing and how it might impact the planet’s natural systems. That’s for the Weather  Channel.

Polite society continues to let the ecological destruction wrought by unfettered capitalism be somebody else’s problem, or more precisely, on the second set of books to which we relegate such “externalities."

After all, wasn’t that the whole rationalization for outsourcing to begin with? Leave it to the Chinese to sweat out the manufacturing details, and the global investor class from the golf course gets to figure out what to do with the profits they extract. But now, with so much of their water polluted and their air so contaminated China’s people and its ecology have been stressed to the breaking point.

“I think in the West there is confusion in part on how this is reported,” says Barbara Finamore, senior attorney and Asia director for the Natural Resources Defense Council. “There is more than one reason for the slowdown. Part of it is they can’t rely on heavy manufacturing anymore. So much of the reporting makes the assumption that there is an unlimited carrying capacity for the natural resources base but there are limits.”

“There is an intentionality to what the Chinese government is doing now, which is not reported,” says Finamore. “In 2015, China’s coal consumption dropped. This is remarkable in that China has begun to decouple its continued economic growth from having to increase its coal consumption.

“In 2015 China surpassed Germany as No. 1 in the world in terms of solar panel installation. Their investment in renewable energy is bigger than the European Union and the United States combined,” says NRDC’s Finamore.

China’s air pollution kills 4,000 people a day, close to 17 percent of the country’s annual mortality. Even though it is roughly a fifth of the world’s population, the Max Planck Institute reports China accounts for almost half of the 3.3 million deaths annually caused by air pollution. According to the  “State of the Planet”  2014 analysis published  by the Columbia University’s Earth Institute, less than 1 percent  of China’s 500 largest cities meet World Health Organization’s air quality standards.

Contaminated air is only part of it. The United Nations World Water Report issued last year reported the Chinese Ministry of Water Resources had determined that in 118 of the country’s cities tested, 97 percent of the sub-surface groundwater was contaminated, and in 64 percent of the places surveyed the drinking water source was seriously contaminated.

The trade journal Water and Wastewater International reports that out of 668 cities, 400 face a major water deficit, with their average daily capita access levels to one of life’s essential ingredients at what the U.N. defines as “extreme scarcity.” So far 90 percent of the water produced by China’s dozens of desalination plants has gone to thermal/nuclear, steel, metal and industrial park production.

China is feeding 20 percent of the world’s population with just 7 percent of the farmland, of which 20 percent is contaminated. As far back as 2001, international experts warned that the aquifer that supports the North China’s Plain, which produces half of China’s wheat and a third of its corn crop, was dropping to the point where it could not be replenished. Tens of thousands of irrigation wells in the region dried up as farmers had to drill deeper and deeper to get the water they needed.

Here in the West, we don’t get the magnitude of what’s going on because our corporate media doesn’t want us making the broader connections to just what a ruination the last few decades of global free trade has wrought on the planet.

“Imagine a thousand Flints in a country without a free press,” says Michael Santoro, a China expert and professor of management and global business at Rutgers Business School. “The environmental degradation is relentless and the people pressing their claims must do so through informal Internet channels.  Because the blowback comes from so many people and is so desperate the government must respond.”

“But the conundrum for the government is that, unlike Flint, the environmental dangers posed are not merely isolated functions of government incompetence, racism and budgetary mismanagement,” according to Santoro. “Rather the environmental problems are tied at the hip with economic growth and are thus much more deeply enmeshed into China's economic growth model and the Communist Party's stability and prosperity premises for governing.”

For years now the Chinese people have been also taking to the streets,  at great risk to themselves and their families, to protest labor conditions, systemic corruption and environmental degradation on a horrific scale. Between 2006 and 2010 protests doubled to 180,000 a year.

“It starts with flash points like parents buying milk, their kids get sick and they die,” says Peter Kwong, a leading expert on Chinese politics and a professor at Hunter College at the City University of New York. “You suppress people to a point  and they can’t take it anymore. So when you finally do hear about  something breaking out it's violent and people put their life at risk to speak up.”

The Lunar New Year celebration in China is supposed to be a weeklong celebration where people return home, celebrate their family, give thanks and honor their ancestors. But instead, according to Reuters,  some of China’s 300 million migratory workers are refusing to return home until they get their back pay.

The Hong Kong-based China Labour Bulletin reports that the number of  labor actions has spiked from 529 in October and November of last year to 774 in December and January. You would not know it from the Western business press, but labor protests and organizing have been on a major upswing for years. In 2015 this social upheaval culminated in 2,774 labor actions as compared to 1,379 the year before. Two thirds of last year’s labor actions were prompted by non-payment of wages primarily in the manufacturing and construction sectors.

“Many factories have not paid their workers and this is the time of year migrant workers traditionally go home and bring gifts for their families to show they have done well,” says Kwong.

Widespread labor abuses are common and the mainland has staggering wealth inequality, yet workers, for several years now, have seen double-digit wage gains, in part because of a shrinking workforce as the population continues to age. As a consequence  manufacturers have shifted to cheaper labor markets in Bangladesh, Vietnam and Cambodia

But even as China aims for clearer skies there is a global debt reckoning coming that's a legacy of this whole global build out hype that is going to be hard to outrun.

There’s no doubt that  China’s downshifting away from heavy industry, its push to reduce its over-capacity in steel production, will make China’s air more breathable and water less at risk from further degradation. Yet, this reset is already causing economic dislocation both domestically  and internationally.  Both China’s excess manufacturing capacity, and  the commodity producing capacity in the world’s emerging markets that supplied it, were all built with a mountain of debt that’s all coming due, even as demand continues to decline.

“The slowdown in China associated with the transformation of its economy has been an especially important factor for the global economy as a whole,” said Jamie Caruana, the general manager with the Bank of International Settlements, at a speech he gave at the London School of Economic earlier this month. “It has weakened demand for commodities and has added further impetus to the downturn in commodity markets that has depressed the outlook for commodity exporters.”

Caruana says energy companies alone racked up $3 trillion in debt over the last decade alone. And there’s more, according to Caruana. “The debt of non-financial companies in emerging market economies (EMEs) has grown so rapidly that in 2013 it overtook that of advanced economies, as a proportion of GDP. Since then, the corporate debt of EMEs as a proportion of GDP has pulled ahead of that in the advanced economies even further.”

This global oil-drenched debt bubble is going to be tough to deflate without making a real mess. So much for betting on a sure thing.