Dear liberal white guys: Before you offer your critique of Beyoncé's "Formation," read this

If your friends are anything like mine, they have a lot of ill-advised opinions about Beyoncé—maybe this can help 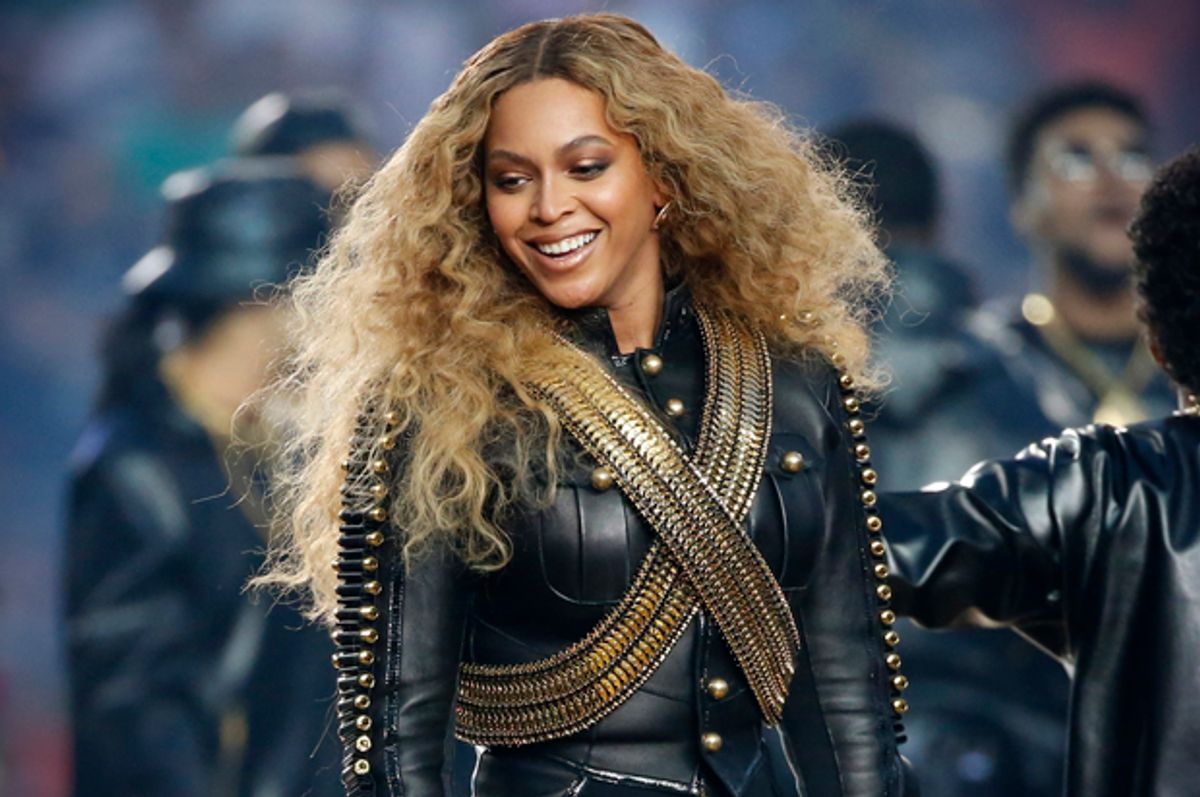 Beyoncé smiles after performing during the half-time show at the Super Bowl, February 7, 2016. (Reuters/Lucy Nicholson)
--

By now, liberal white men understand the terrible fate that befalls Beyoncé’s critics. Most, therefore, have kept their critiques of Queen Bey’s game-changing single “Formation” out of major publications – leaving the high-profile reactionary backlash to the likes of Rudy Giuliani and the Fox News crowd.

But if your liberal white male friends are anything like mine, they have not kept quiet. In Facebook rants, emails, and private conversations, friends and colleagues of mine have critiqued “Formation’s” lyrics as "dumb" and "meaningless," her video as "vapid." They’ve pointed to what they see as better examples of protest music; claimed that Bey uses her body, beauty, and image as a crutch for weak material; and lambasted the “Formation” kitsch that appeared on Beyoncé’s website immediately after the song’s release.

1. Read some of the many articles by brilliant women of color

There is no shortage of outstanding commentary on this song: much of it by women of color who know more about the black freedom struggle, black politics, and black art than most of us could accumulate in a dozen lifetimes. If these commentators can find meaning in the song, then I strongly encourage anyone who has dubbed the song meaningless to reconsider their assessment.

Here are some of my favorite commentaries to date:

Tiffany Lee, “If You Ain’t Got In-‘Formation,’” Black Girl Dangerous

If Step 1 hasn’t convinced you, consider this: what some are calling ‘dumb’ (lyrics like “When he fuck me good, I take his ass to Red Lobster”) is merely blunt. And that’s the point! “Formation” is about black pride, country pride, pride in the lives, bodies, culture, and beauty of everyday Americans of color. It’s Bessie Smith and Robert Johnson for the twenty-first century. To celebrate hot sauce and Jackson 5 nostrils in the style of Bob Dylan or Neil Young would defeat the song’s purpose.

For all the bluntness of “Formation’s” lyrics, there’s a world of nuance in the song’s visuals that may have eluded many white male viewers. Until you can intelligently discuss whether Beyoncé’s red dress is meant to evoke water deity Mami Wata, you may want to hold your thoughts on the vapidity of the video.

4. If you’ve got a problem with materialism, find another target

I’ve heard gripes about Bey’s celebration of Givenchy as well as the song’s concluding couplet: “Always stay gracious, best revenge is your paper.” Generally speaking, I agree with these gripes. I too object to the principle behind what Tiffany Lee calls Beyoncé’s “constant conflation of capitalistic success with feminist liberation.”

But, as Lee also states, this isn’t the point of the song. And ultimately there are far more grievous offenders when it comes to rank materialism than Queen Bey. Are we really going to pick on Beyoncé when Donald Trump and Pharma Bro continue to stalk the earth?

5.  Remember that you do not have a monopoly on feminism

Some have suggested that the vertical motion of Beyoncé’s posterior, the sight of her bare sternum, or the mere mention of sexual intercourse should disqualify the politics of the song. “This isn’t a protest song,” imaginary white man howls. “It’s just T&A.”

These critics seem to be operating under the impression that, because black women continue to be treated as sexual objects in popular culture, anti-racist and feminist art must depict women in burlap sacks and bonnets. There are, of course, feminists who think this way. But there are also fully-fledged feminists (Beyoncé among them) who believe that the problem is not sexuality, but rather popular culture’s narrow focus on men’s gratification and power. Hence the importance of the Red Lobster line (and in fact the entirety of Beyoncé previous album): the relentless focus on her pleasure and her power.

Also, regardless of internecine fights over the appropriate place of sexuality in anti-racist and feminist art, pretty much everyone can agree that men telling women what to do with their bodies is not feminism.

White people have a terrible, oppressive habit of engaging black activism at the level of strategy rather than substance. Want proof? Read (or re-read) Dr. King’s “Letter from a Birmingham Jail” and consider how much of the essay is devoted to convincing supposed white allies that their strategic considerations for the Civil Rights movement are basically racist, conservative, and self-defeating.

Continuing this tradition, liberal criticism of “Formation” has focused on what Beyoncé should and could have said: how her song and video could have made a more effective, trenchant or impactful statement. To this I say: Shut it, white folks. The black freedom struggle does not need white people’s strategic input. It needs white people to be better versions of themselves, to stop participating in and perpetuating white supremacy.

Is “Formation” the last word on anti-racist feminism? Of course it is not. Thankfully, Beyoncé is but one of many powerful voices – from Toni Morrison and Chimamanda Ngozi Adichie to Mia McKenzie and Ta-Nahisi Coates. To demand Beyoncé be a “spokesperson” is among the most insidious forms of racism. When we start pillorying Toby Keith or the Insane Clown Posse for misrepresenting white America, please get back to me.

7. Remember that you don’t have to like the song musically

Nobody’s asking you to adopt “Formation” as your personal anthem. They’re just asking you to recognize its significance for Americans of color.

Also, are you really going to choose this song to rail on? Have you heard of Justin Bieber?

8. Consider that #BlackLivesMatter is now a club banger

Think about it: the biggest star in America has drowned a NOLA cop car and decked her backup dancers in Black Panther berets (at the flipping Super Bowl, no less). White American sorority girls are going to be singing along — not un-problematically! — to a song about the beauty of wide noses and afros. And every person in America under the age of 30 has now watched a black child, using only the power of his badass dancing, make a riot squad surrender. Even if you think Coates’s "Between the World and Me" is a superior piece of activism and art, you must admit that its reach cannot compete with “Formation.”

In making this track, Beyoncé has given the 21st century black freedom struggle its own version of James Brown’s “Say It Loud -- I’m Black and I’m Proud” or Nina Simone’s “Four Women.” Musically, I like the Brown and Simone tracks better than “Formation.” (See Point 7 above—so what?!) But I think they all add up to the same thing: Major black artists embracing struggle and using their star power to put the work of black activists, artists, and thinkers before a huge audience of people, including the white folks who are ultimately responsible for ending oppression. For this, she deserves all of the credit and love coming to her.