Nothing new about Donald Trump's bigotry: He's just an amplified version of what outlets like Fox News peddle every day

For those taken aback by Trump, he's merely the next step in the conservative movement's evolution 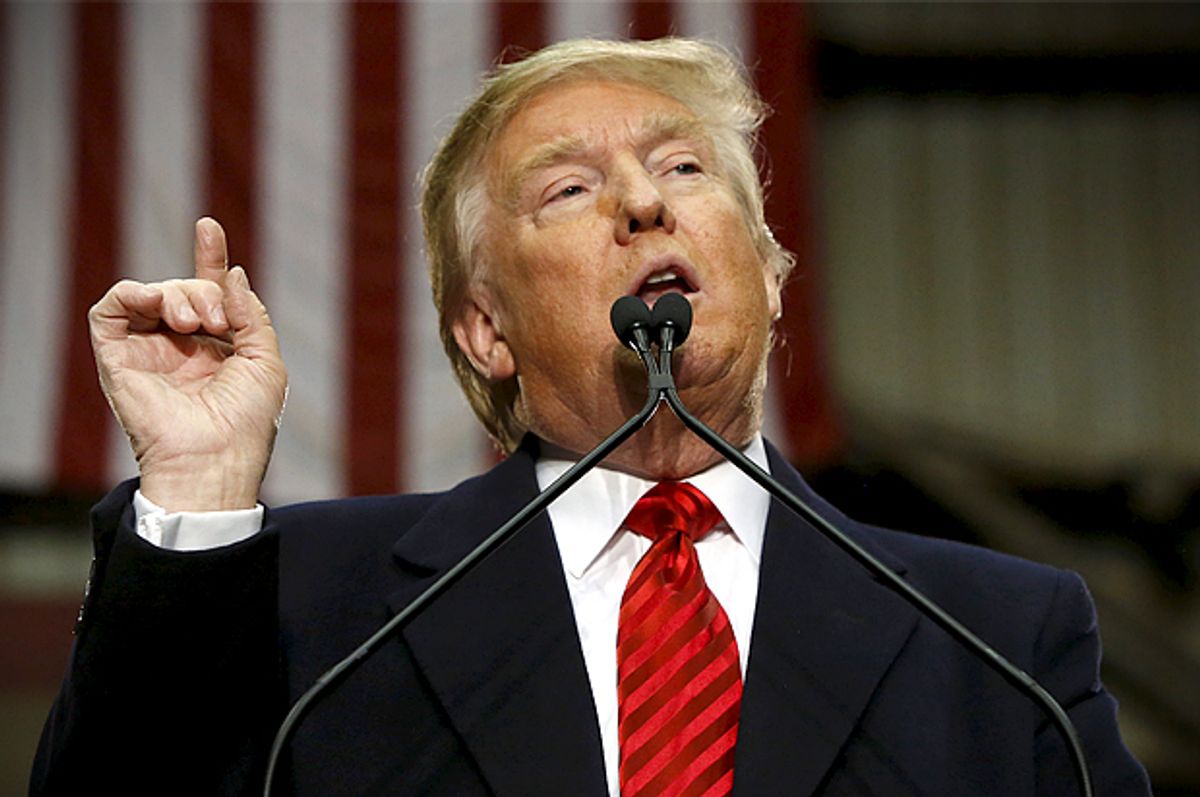 That Donald Trump is a significant departure from right-wing politics as usual is undeniable. While most Republican politicians and pundits maintain a veneer of civility and claim to agree with liberal values of equality and reason, Trump blows right past that, embracing a demagogic style that is often reminiscent of fascism. Under the circumstances, it's understandable to believe that this development means we've crossed into some alarming new phase of right-wing politics, to believe that this aesthetic difference portends a real shift in the political views of the right.

Ezra Klein made just this argument in a widely shared editorial at Vox:

Trump is the most dangerous major candidate for president in memory. He pairs terrible ideas with an alarming temperament; he's a racist, a sexist, and a demagogue, but he's also a narcissist, a bully, and a dilettante. He lies so constantly and so fluently that it's hard to know if he even realizes he's lying. He delights in schoolyard taunts and luxuriates in backlash.

He's not wrong about Trump and it's hard not to commiserate with his alarm. But it's also wrong to believe that this represents anything new in right-wing politics. Modern conservatism is built on racism and sexism and bullying and lies. Before Trump even considered running for the 2016 election, Republicans had spent years launching ever more extreme attacks on reproductive rights and the voting rights of racial minorities. Outright lying — on climate change, the dangers of abortion, the effects of their regressive tax policies, WMDs in Iraq, you name it — is standard operating procedure on the right, so common that it's more notable when a right-wing politician tells the truth than when he lies.

Trump's major innovation is adding a charming doesn't-give-a-fuck quality to the proceedings, which is no doubt the main reason he's popular with the base.

Klein went on Chris Hayes' MSNBC show Wednesday night to discuss some of the details feeding his worries, and they talked about Trump's deplorable habit of retweeting people are unapologetic neo-Nazis.

There's not wrong, of course. You really don't want major politicians giving their blessing to overt racists, because that helps normalize their beliefs. No disagreement there.

But it is worth noting that on the same night they were having this discussion, Fox News, which is seen as the network for mainstream Republicanism of the sort that Trump is overturning, spooled out some nasty racist propaganda of their own.

On "The Kelly File," a guest even made, and I am not kidding, a "fried chicken" joke about black voters. Megyn Kelly and her guests were talking about Bernie Sanders's meeting with Al Sharpton, and suddenly Kevin Jackson straight up said, "you may as well have brought a representative from Kentucky Fried Chicken and said 'let the bidding begin.'"

To be clear, Kelly and her other guest, Richard Fowler, did push back on this, though by playing dumb (both said they didn't get Jackson's point), and Kelly followed up by clarifying that Sharpton does not eat fried chicken for health reasons, even though that has nothing to do with what Jackson was saying. His "joke" wasn't that Sharpton personally is a fan of fried chicken, but just yuk-yuking about buying off black voters with a Kentucky Fried Chicken endorsement.

A little less overt but still obnoxious was "The O'Reilly Factor" earlier that evening when Bill O'Reilly argued that "one of the reasons Barack Obama won was because African-Americans voted for him to the tune of 93 or 94 percent" and that a major reason was "because of his skin color."

His guest, Eboni Williams, tweaked that a bit, saying, "Some of it was because of maybe his skin color, but not because he said oh us downtrodden victim-hood mentality."

It's noteworthy that, on both segments, the guests in question were black, and even the "fried chicken" joke came from a black guest, Kevin Jackson. But that's how conservative propaganda outlets like Fox News generally operate. The pretense is that they agree with liberal values like racial equality — look, they have black guests! — but then that pretense is used to advance odious, easily debunked racial stereotypes.

The conservative audience for Fox News tunes in to hear about how black voters are stupid, venial, easily bought off and the "real" racists, and Fox News is going to shovel that nonsense at them, even if they have to drape it into faux claims to be doing it in the name of basic liberal values like equality.

(They do the same thing with gender issues. The relentless drumbeat of anti-feminism on Fox News is almost always performed by a woman or in the presence of a woman, whose indulgent laughter signals that it's not "really" sexism that's going on.)

Fox News may have a more sophisticated format, but they are still peddling the same racist stereotypes that Trump is needling, albeit more blatantly, in order to rally conservative voters around him. And most, probably all Republicans politician out there— hell, quite a few Democratic ones— are perfectly happy to go onto Fox News. They even host Republican debates. That is what mainstream conservatism is: Really frigging racist.

And really, Trump still plays the same game of plausible deniability as Fox News, even if he likes to stick a toe over the constantly shifting line more. Even his noxious "pussy" moment was played in exactly the same way "The Kelly File" played the "fried chicken" joke. A woman was the original source of the word (giving cover to deny that it's really sexist), Trump issued a bunch of disavowals of such illiberal language, but everyone in place got that you just have to say that in order to placate the PC police. It's a game, and he plays it well. But so does everyone else in the conservative movement.