No matter what the CIA director wants to claim, his agency was caught looking at Senate files without authorization 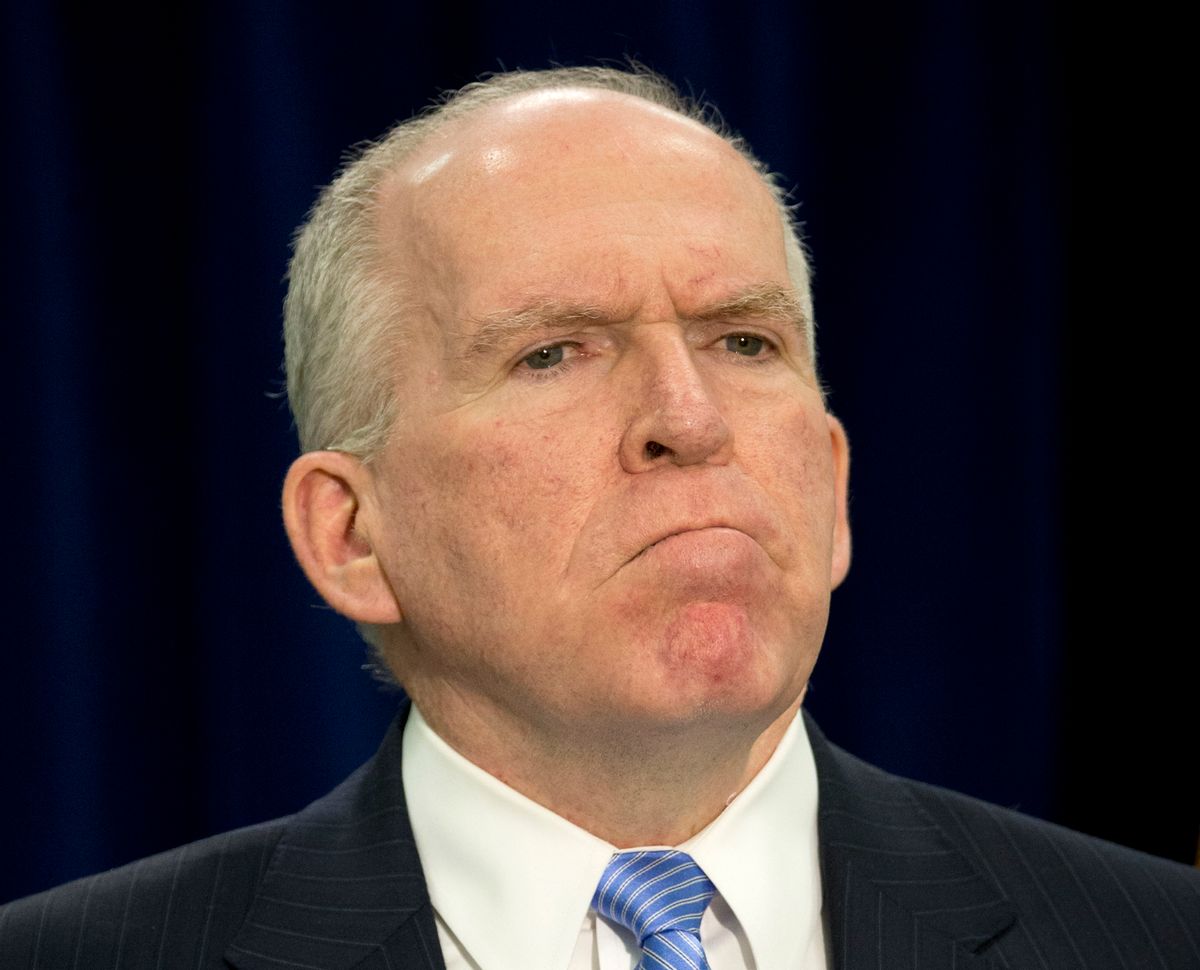 In this Dec. 11, 2014, file photo, CIA Director John Brennan pauses during a news conference at CIA headquarters in Langley, Va. The Senate report on the CIAs interrogation program and the spy agencys official response clash on almost every aspect of the long-secret operation, from the brutality and effectiveness of its methods to the agencys secret dealings with the Bush White House, Congress and the media. But both reports largely agree on one major CIA failure, the agencys mismanagement of the now-shuttered program. (AP Photo/Pablo Martinez Monsivais, File) (AP/Pablo Martinez Monsivais, File)
--

"Do not say that we spied on Senate computers or files," CIA Director John Brennan said testily in a Senate Intelligence Committee Threat Assessment hearing on Tuesday, leaning forward and shaking his head with almost every word. "We did not do that. We were fulfilling our responsibilities."

Brennan was objecting to Sen. Ron Wyden's characterization as "spying" of a controversial CIA search of files relating to an investigation of the agency's torture program. In order to understand the nuances of this distinction, a little backstory is necessary.

In 2009, the CIA had set up an offsite server that contained files relevant to its infamous torture program, to be used by the Department of Justice as well as Intelligence Committee (SSCI) staffers. The server had a dedicated portion for SSCI staffers that CIA officials weren't supposed to access. In 2013, during a period when CIA and SSCI were arguing about the veracity of some conclusions made in the draft torture report, SSCI staffers found a document, which the CIA now claims shouldn't have been accessible to SSCI staffers, proving that the agency itself actually agreed with the report's conclusions in an internal investigation conducted all the way back in 2009.

In early 2014, CIA investigators tried to find out how the staffers had obtained the damning document. (They obtained it, as Vice reported last year, by using a search tool provided by a CIA contractor, and as such any error in question belonged to the CIA.) In doing so, CIA investigators violated a promise not to access any of the server files dedicated to Senate staffers.

Brennan's insistence that the spy agency had not spied on the committee that oversees its actions took place amid a testy six-minute exchange during which Wyden attempted to get Brennan to agree that CIA would never again spy on the committee.

"I'd like to set the record straight that this would never happen again," Wyden explained to justify his question.

As Wyden noted, Brennan's peers at the NSA, the FBI, and the Office of the Director of National Intelligence had previously agreed that it would be inappropriate for their agencies to conduct such "secret search without external authorization." But even in spite of the two reports Wyden read verbatim, concluding the CIA access had been unauthorized, Brennan insisted that the search on the committee's partition had been proper. He even reiterated a CIA claim that staffers had inappropriately removed the document, insisting that "separation of powers ... goes both ways."

This is an issue that has soured relations between the CIA and those on the Intelligence Committee who championed the Torture Report as a way to ensure the CIA would never engage in torture again. Particularly given that this week's appearance was the first public appearance before the committee by Director Brennan since the spat erupted in early 2014, it was inevitable that Wyden -- who has a history of using public hearings to raise uncomfortable issues -- would point out that Brennan's past denials of CIA impropriety were false.

Which is why Brennan's initial reaction to Wyden's comments was so odd. "This is the annual threat assessment, is it not?" Brennan snapped into his microphone. He seemed to be suggesting that, even though Wyden always uses these hearings to exercise oversight, doing so here was totally inappropriate.

Brennan's response was all the more troubling given precisely what the report he and his colleagues presented actually said. Among the other threats facing the nation, Director of National Intelligence James Clapper's written testimony explained, one particular problem was insiders accessing and disclosing sensitive information without authorization. "Insiders who disclose sensitive US Government information without authorization will remain a significant threat in 2016." That's precisely the accusation Wyden made against the CIA and (though his case is weaker) the same accusation Brennan made of SSCI staffers.

Mind you, having CIA and SSCI inappropriately spying on each other surely isn't what Clapper meant. That statement presumably referred to people like Edward Snowden and Chelsea Manning, each of whom leaked vast swathes of documents to the public, or even Jeffrey Sterling, the former CIA officer prosecuted for leaking information to the New York Times last year.

But here's how Wyden laid out the stakes of CIA spying on the Senate. "When you're talking about spying on a committee responsible for overseeing your agency, in my view, that undermines the very checks and balances that protect our democracy and it's unacceptable in a free society."

Perhaps John Brennan believes threat assessments only flow the other way, with spooks telling their nominal overseers what threats lurk over America. But the heated discussion about the CIA's actions -- and Director Brennan's refusal to promise not to repeat them -- seemed a quite appropriate topic for an annual review of the threats facing America.