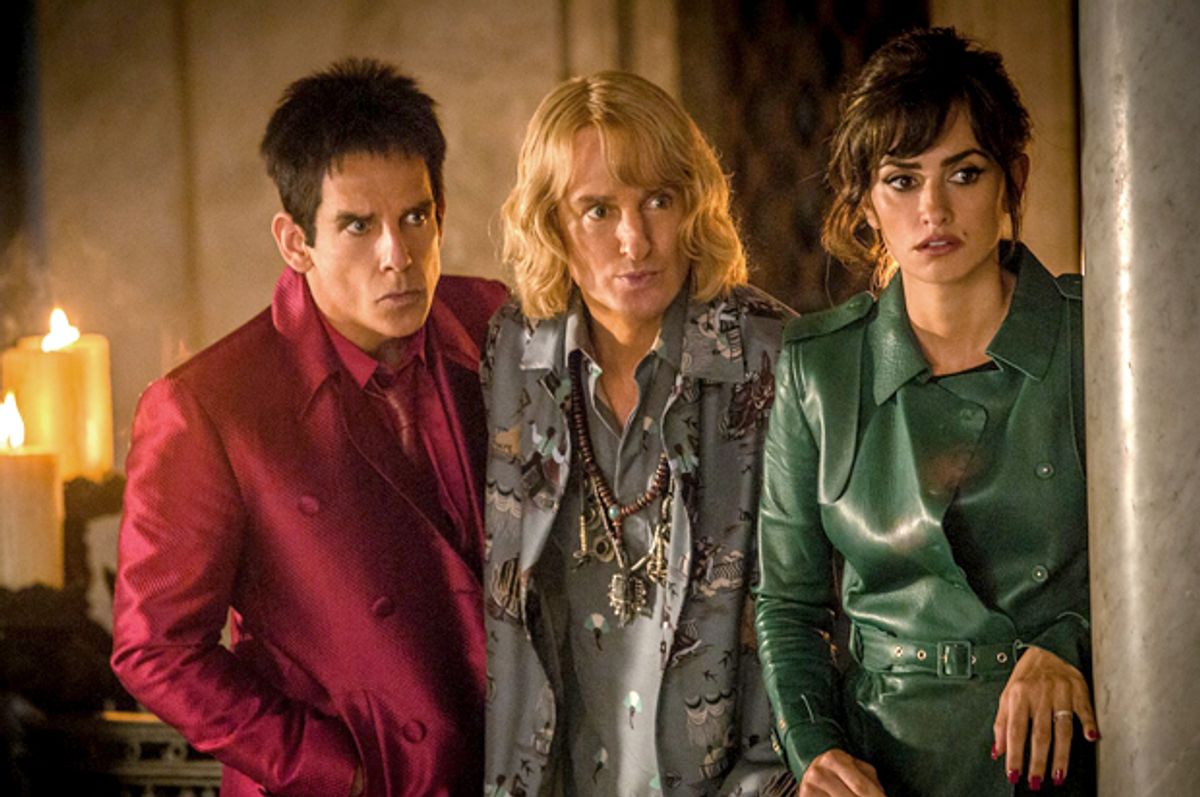 When I watch some bad movies, I cannot figure out why they were made. The recent “Dirty Grandpa” seems to exist so that Robert De Niro can say the “N-word” on-screen and stick his flaccid penis in Zac Efron’s face. Its director, Dan Mazer, is an Oscar nominee. Was this the kind of movie he dreamed of making when he got into film?

But in the case of “Zoolander 2,” it’s hard to fathom why anyone wanted to make this particular version of it. There’s no reason the movie had to be this terrible. “Zoolander 2” was written by four people who have done much better things. Nicholas Stoller made “Neighbors” and “Forgetting Sarah Marshall.” John Hamburg wrote and directed the underrated “I Love You, Man,” a touching and observant bromance. Ben Stiller and Justin Theroux were two-thirds of the team behind “Tropic Thunder,” one of the more audacious Hollywood satires of the past decade. Your opinions on seeing Robert Downey Jr. in blackface may vary, but you cannot say the film lacks gumption.

Many of these comic talents were behind the original “Zoolander,” a charming dumb-smart comedy marred by its unfortunate release date. The film, about an assassination plot foiled by male models, debuted in theaters just two weeks after Sept. 11. Since no one wanted to see a terrorist comedy, “Zoolander” performed very modestly in theaters—en route to becoming a cult classic on DVD.

For Stiller and co., getting a do-over must have felt like a shot at redemption, like Rocky climbing the stairs of the Philadelphia Art Museum before the title match. It’s just too bad the end result is the exact opposite: falling down and hitting every single step along the way. “Zoolander 2” never, ever finds its rhythm, like a badly dubbed foreign film that always feels a beat behind. Some scenes sag under the weight of bad material, while others feel as if the writers forgot to add the actual jokes.

It’s not a good sign when a movie scores its biggest laughs in the first five minutes. “Zoolander 2” begins promisingly enough. The world’s pop stars are being systematically killed off, with Justin Bieber (playing himself) marking the most recent casualty in the celebrity serial murders. Before he dies, Bieber snaps one last selfie in his final moments, taking painstaking care to select the proper Instagram filter to document his untimely death. The premiere of TV’s “Scream Queens” featured a similar gag spoofing millennial narcissism in the face of tragedy, and the joke is still funny.

The rest of “Zoolander 2” lacks any real comic bite—or much of a reason to exist. “Zoolander 2” details Derek Zoolander’s (Stiller) quest to climb back to the top of the modeling industry, more than a decade after he left the fashion world in disgrace. His ex-wife, Matilda (Christine Taylor), was killed when the Derek Zoolander Center for Kids Who Can’t Read Good and Who Wanna Learn to Do Other Stuff Good Too collapsed immediately after it was built. His son, Derek Jr., was subsequently taken away by Child Protective Services. By teaming up with a sexy Interpol agent (a wasted Penelope Cruz) to find the culprit behind the killings, Zoolander can not only get Derek Jr. back but also prove he’s still got it.

He doesn’t. If “Zoolander” was a sometimes sharp satire of the insular fashion world and our celebrity-obsessed culture, its sequel is everything that film was designed to mock. “Zoolander 2” is a string of embarrassing and unnecessary famous person cameos—featuring everyone from Neil deGrasse Tyson and Katy Perry to Susan Sarandon, who pops up just long enough to make “Rocky Horror” fans weep with agony. Even noted Instagram plagiarist Josh Ostrovsky (better known as “The Fat Jew”) appears on-screen for the briefest of moments—because, hey, why not?

That very question is the ethos behind the entire film: If “Zoolander 2” can do it, the filmmakers believe the movie should. That lack of comic discipline is why we get endless takes of fashion icons riffing off each other (because you totally wanted to hear the comic stylings of Anna Wintour). It’s also why the film includes a transphobic interlude featuring “All,” a gender ambiguous model played by Benedict Cumberbatch. After a line asking whether All had a “hotdog or a bun” sparked outrage when the film’s trailer hit the Internet, I expected the scene might hit the cutting room floor. It remains intact because to an extent, that’s the entire movie. Otherwise you’d have to rip the whole thing to shreds.

That wouldn’t be such a bad idea. “Zoolander 2” is the kind of movie you want to throw paint all over, as strangely conservative and mean-spirited as its predecessor was disarmingly sweet. This is a movie that’s deeply uncomfortable with America 15 years after we last left the series. Aside from lazy references to Uber and Ariana Grande, it features a running gag in which Hansel (Owen Wilson) is now in a committed relationship with a group of people he refers to as his “orgy.” The cast of characters includes both Kiefer Sutherland and a goat. When Hansel cheats on his many lovers during a later sex scene, a pig scampers out of the closet.

Even when the movie is trying to be progressive, it’s less an embrace of poly queerness than a joke about how crazy and weird it would be if Jack Bauer and that guy from “Wedding Crashers” hooked up. After all, same-sex intimacy is repeatedly equated to bestiality.

There’s a much better movie dying to get out from underneath this rotting pile of garbage. Assisted by CGI, Fred Armisen has a delightfully absurd cameo as a tween social media manager, but the movie quickly forgets he’s even in it. Will Ferrell, reprising his role as the poodle-haired Mugatu, appears to be ad-libbing most of his best lines. Meanwhile, Kristen Wiig certainly looks the part as Alexanya Atoz, a fashion designer with an indecipherable accent and an over-the-top array of Lady Gaga-esque ensembles. Like the movie she’s in, Wiig is all dressed up with nowhere to go.

If you enjoyed “Zoolander,” listen to your friend Billy Zane: Toss this one back in the bargain bin where it belongs. This hideous knockoff isn’t just a crime against fashion, it’s an affront to everyone who liked the original.