"Cruel" deportations of kids: U.S. and U.K. are sending child refugees back to where they may be killed 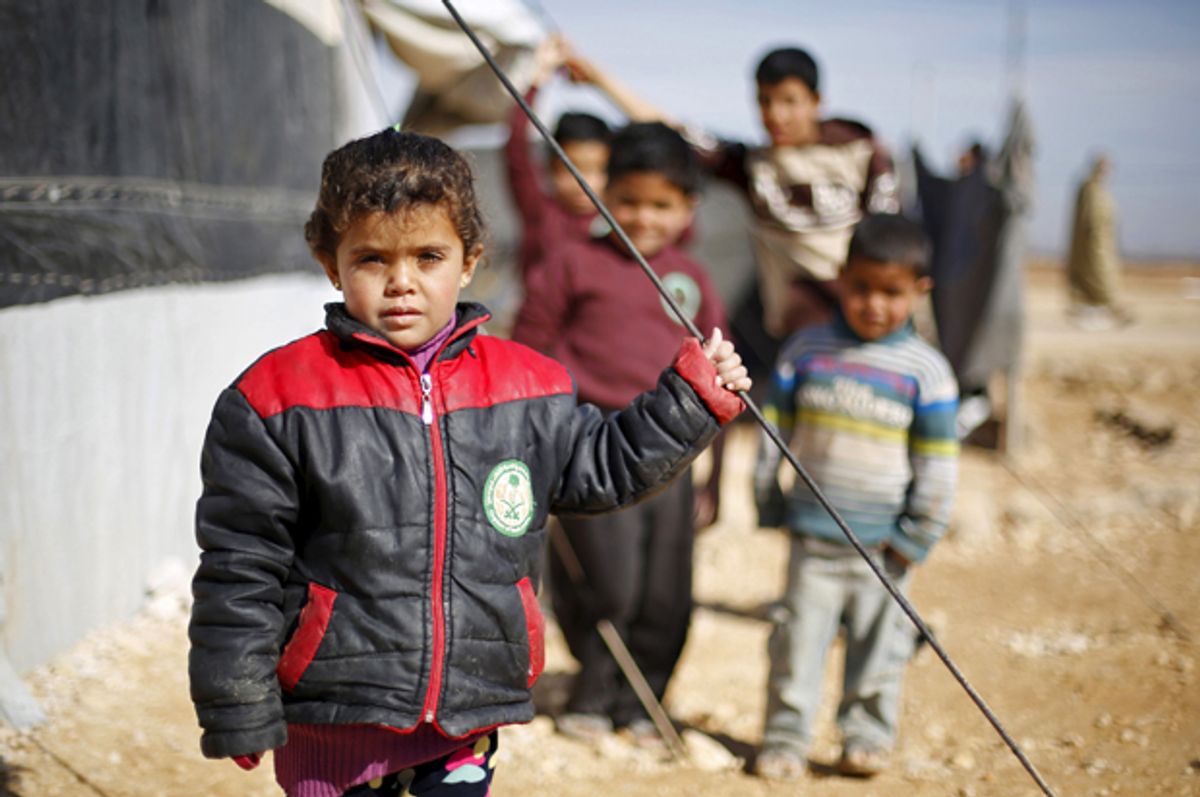 Syrian refugee children at Al Zaatari refugee camp in the Jordanian city of Mafraq, near the border with Syria, January 30, 2016. (Reuters/Muhammad Hamed)
--

A new report by the U.K.-based Bureau of Investigative Journalism found that thousands of unaccompanied child asylum seekers have "been deported to war-torn countries that are in part controlled by Islamic State, the Taliban or other repressive regimes."

Roughly 60 children have been forced to go back to Iraq since the rise of ISIS in 2014. In 2015, another 57 child refugees were deported to Afghanistan, where the Taliban and ISIS are seizing more territory.

In total, over the past nine years, the U.K. has sent 2,748 unaccompanied child refugees back to their war-torn homelands. Some of the youths had spent years in Britain, making friends and going to school.

The British minister for security and immigration at the Home Office had previously provided inaccurate numbers that understated the scale of deportations by 250 percent. He later apologized.

"It's alarming to hear that the U.K. is returning young adults to Afghanistan, Iraq, Iran, Libya and Syria, and in such numbers. First off, these returns may well be in breach of international law, which prohibits returns to countries where people's lives or freedom would be threatened," Bochenek said.

"Second, there's a real possibility, as the report notes, that young adults who have spent a portion of their formative years in the UK would be targeted for persecution because of their association with Western values — meaning that they may now have strong asylum claims even if their initial claim was found lacking," he continued.

"Third, even in the absence of these legal constraints, it's exceptionally cruel to expel young adults shortly after their 18th birthday from the places of safety they have come to think of as their homes," Bochenek added. "Britain can and should do better by these young adults."

Nearly half of Afghanistan's provinces are considered at high or extreme risk by the U.N. In 2015, violence between the Taliban and U.S.-backed government forces has escalated. The Human Rights Watch executive pointed out that there have been "devastating consequences for civilians."

"Taliban forces have targeted civilians for attack and have also injured and killed civilians in large numbers through the indiscriminate use of improvised explosive devices," Bochenek said. "Government forces are also responsible for civilian casualties, particularly when mortars and rockets are used indiscriminately."

"In short, there are substantial grounds for concluding that return to these circumstances would violate the prohibition on 'refoulement,' the term used in international law for returns to persecution or threats to life or safety," Bochenek explained.

In the U.S., the Obama administration is pursuing similar policies.

For years, immigrants' rights activists have disparagingly called Obama the "Deporter in Chief." President Obama has deported more people than any other president — more than 2.5 million people. Fusion reported in January that the administration is "on pace to deport more people than the sum of all 19 presidents who governed the United States from 1892-2000, according to government data."

In early 2016, U.S. Immigration and Customs Enforcement, or ICE, began rounding up families who fled violence in Central America. Rights groups said they are "appalled" and "outraged" at the deportations, detentions and raids.

On Feb. 2, immigrants' rights, social justice and faith groups joined impacted families in a march and press conference in front of the White House. They delivered President Obama a petition with more than 130,000 signatures, calling on the government to end all deportations of refugee families from Central America and provide them with Temporary Protected Status.

The senior counsel on children's rights for Human Rights Watch told Salon that the "move in the United States to deport Central American mothers and children is no less disturbing."

"Ninety percent of Central American families who were detained on arrival were found to have a credible fear of returning home, essentially passing the first stage in an asylum claim, but many fewer are ultimately granted asylum in hearings before immigration judges," Bochenek explained.

"The United States doesn't guarantee lawyers to people facing deportation — not even to unaccompanied children. Being represented makes a real difference," he added. "A recent study found that Central American families with legal representation were 20 times more likely to receive asylum, compared to those without lawyers."

Other legal organizations and rights groups, such as the American Civil Liberties Union, the National Immigration Law Center in Los Angeles and the Fair Immigration Reform Movement, have said the same, arguing that many of the asylum-seekers fleeing violence in Central America are just like Syrian refugees.

El Salvador, from which many migrants are fleeing, witnessed an explosion in murders in 2015, turning it into the murder capital of the world. More than 6,650 people were killed in the tiny country in 2015, according to government data, a 70 percent increase from 2014. El Salvador has a homicide rate of 104 people per 100,000, the highest for any country in almost two decades.

Neighboring Honduras is not far behind. Drug violence, fueled by the U.S. war on drugs, has plagued the country for decades, and it was formerly sometimes referred to as the murder capital of the world.

The kinds of acts of violence seen in war-torn countries in the Middle East have also been seen for years in Central American. In countries like El Salvador, Honduras, Guatemala, Colombia and Mexico, it is not uncommon for journalists and labor organizers to be kidnapped and executed. Before ISIS began carrying out beheadings in Iraq and Syria, the same happened in some of these countries.

"Many of these families have fled serious risks," Bochenek said. "Over the past year, for example, I've interviewed children from El Salvador, Guatemala, and Honduras who reported that they or their families were pressured to join local gangs, threatened with sexual violence and exploitation, held for ransom, subjected to extortion or suffered domestic violence."

"Central American families and unaccompanied children should get full and fair hearings in U.S. immigration courts," the Human Rights Watch official said. "That means making the asylum process more accessible, including by providing legal counsel for unaccompanied children at the very least, and by ensuring that all asylum seekers understand their right to appeal adverse initial decisions."