Dear Oregon militia men: Here's why no one feels sorry for you and rejects your mission built on conservative Christian rage

By the end of the Oregon standoff, the country was made aware how incoherent and puerile their grievances were 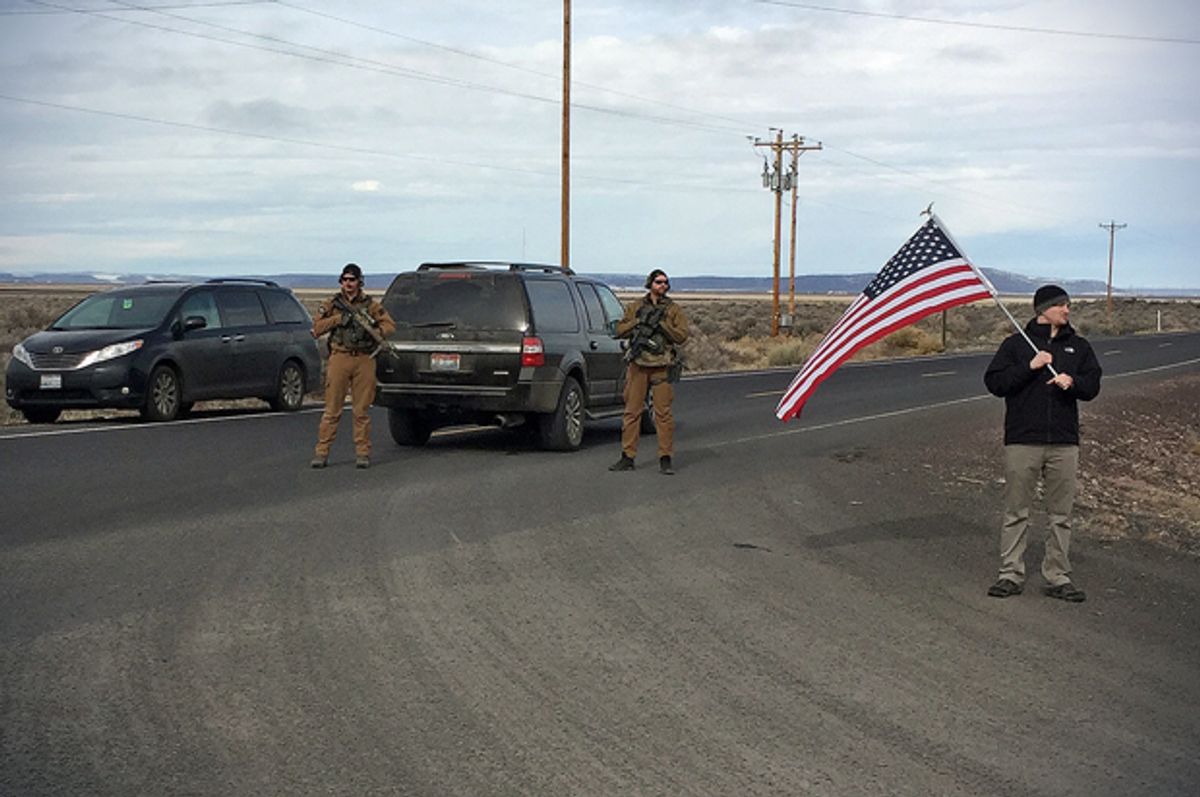 Armed law enforcement officers stand near a closed highway about 4 miles outside of the Malheur National Wildlife Refuge in Burns, Ore, after the last four occupiers of the national nature preserve surrendered on Thursday, Feb. 11, 2016. (AP/Rebecca Boone)
--

The standoff between government officials and right-wing extremists at the Malheur National Wildlife Refuge has come to an end with a whimper and not the bang the militiamen, who used their time occupying this Oregon federal park bragging to whatever camera they could find about what tough guys they are, clearly hoped for. As a bonus, the FBI even bagged Cliven Bundy, the Nevada rancher whose unwillingness to pay the taxpayers for letting him graze his cattle on federal lands started this whole thing. He made a big stink about how he was going to Oregon to help the occupiers, which gave the FBI a chance to catch him unarmed coming off an airplane.

As I've noted before, the strategy of waiting them out has not only helped minimize bloodshed, but has likely prevented some future events like this. The more the occupiers talked, the more obvious it became that they were not fierce warriors ready to die for a noble cause, but a bunch of fantasists who, bitter because white Christian conservatives don't get the social deference they believe they deserve, have turned to conspiracy theories and other right wing argle-bargle in order to justify their sense that not being catered to is the same thing as being oppressed.

The final 24 hours were key in sending the message to other right-wing nuts who are considering similar stunts that the only thing they'll get from that is the world laughing at you as your tough guy act crumples into a ball of gibberish and eventual surrender.

After the FBI surrounded the refuge, the four remaining militants inside started live streaming their reaction, and what came out of them was so embarrassing that it beat anything a satirist trying to make fun of them could write.

Slate's Jacob Brogan live-tweeted the stream, and what struck him right away was "the combination of ideological incoherence and aggressive uncertainty."  They refused to recognize the authority of federal agents on federal land, as if wishing hard enough would make it go away. Their chatter suggested they  "are intellectually and ideologically incommensurable even to one another".

"All they seem to share are abstract reference points: guns, liberty, tyranny. No collective notion of how those things connect," Brogan added. No big surprise, really. It seems at least a couple of them, possibly all, are deeply troubled people, drawn to this out of a sense of drama and not because they have a coherent or principled belief system to stand up for.

This scattershot non-ideology of yelling "Constitution," "guns" and "liberty" a lot is the marker of today's modern conservative populism, the kind that Donald Trump's ascension is channeling into electoral fever. Their actual grievance is fury over the fact that white people, especially of the Christian and male variety, are watching their presumed superiority decline, but to say so out loud and bluntly— to admit out loud to racism— is to court political marginalization in our society.

So instead, all these code words and symbols and half-baked theories of government rise up to communicate these ideas without coming right out and saying it. It doesn't really need to cohere as an ideology. The only thing that needs to be stated is that these folks feel oppressed, the world owes them something, and they believe they are martyrs because they're not getting it.

In all the stress, the real sources of grievance did leak out at times.

@Jacob_Brogan One occupier castigated a federal agent: "You let Hillary continue to run for president," as if that were the FBI's domain.

It would be almost poignant, if the underlying sentiment weren't so vile. How could you let Hillary Clinton— a woman and a Democrat— just run for office like that? Wasn't there supposed to be some check on this? They kept women out of the Oval Office for 227 years, but now somehow the rules have changed and "they" decided to let women take a shot at it.

Fry says he should be able to opt out of taxes and earn money without paying for abortions. #Oregonstandoff

Railing against "taxpayer funded abortion" is a daily thing in conservative media, a talking point that is immoveable despite the fact that federal law has banned this since 1976. That's likely because it's just a code phrase, not really meant to be taken literally but to evoke a set of resentments: Instead of having a sweet little housewife who takes care of you, like your grandpa had, you have to watch all these young women go to college and experiment sexually and be free and, above all other things, not need you. Squawking about taxpayer-funded abortion is a way for right wing men to tell themselves that women are still depending on them, but they just don't get to benefit from it anymore. It's a lie, but a comforting one, much easier than accepting that women don't need men to survive any longer.

Of course, no one really feels that sorry for people whose pain is due to the loss of privileges they never really deserved in the first place. No one knows this more than those who want to complain about this particular loss, which is why they come up with elaborate rationalizations and complex theories to reframe loss of privilege as a form of oppression.

In the hands of professional propagandists, such as Rush Limbaugh and Fox News, this process is effective at creating semi-coherent rationalizations for these inadmissible feelings. But in the hands of amateurs, such as the Oregon militiamen? You get people squawking about how Hillary Clinton shouldn't even be allowed to run for president.

If another Democrat, be it Hillary Clinton or Bernie Sanders, is president this time next year, we can expect that this surge of embittered right-wing radicalism isn't going away. If anything, they'll be even more aggravated after the loss of their great orange hope, Donald Trump. That means this kind of incoherent right-wing rage at losing "their" country is just going to keep on keeping on.

But, because of the patience of the FBI and the advent of social media that allows right-wing nuts to keep the world apprised of every fool thought that pops into their head, at least we have concrete proof that picking up guns and trying to do something about it makes them look like fools. Hopefully, future would-be right-wing militia men will know that there are extremely low odds that their attempted last stands will turn them into heroes and martyrs instead of laughingstocks. This, in turn, will hopefully discourage more self-proclaimed patriots who hate our country from pulling stunts like this.