Exit poll data proves it: Trump is the candidate of voters who resent African-Americans and immigrants 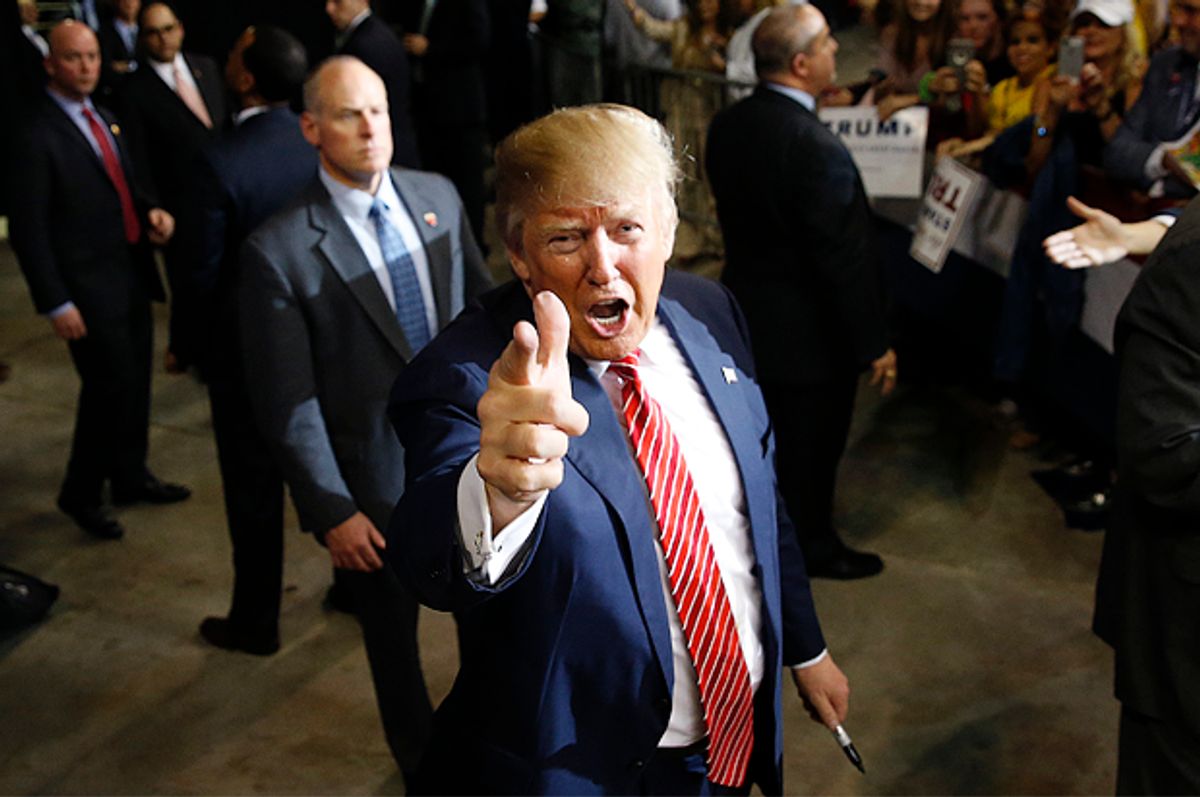 Donald Trump wants more things for “us” and fewer things for “them.” The question then becomes, who gets to define and enforce those boundaries of political community.

The Republicans in the New Hampshire primary responded to Trump’s message with overwhelmingly support—he won with 35 percent of the vote.

As reported by CNN, exit polling data in New Hampshire shows the reach of Donald Trump’s appeal to Republican voters:

Exit poll results from the New Hampshire primary on Tuesday night showed deep discontent with the Republican Party and the federal government, and the candidate who railed hardest on those topics, Donald Trump, won with multiple groups of voters.

Trump won New Hampshire's primary by carrying a range of demographic and ideological groups with more than 30% of the vote. He topped the rest of the field among both men and women, voters under age 64, voters without a college degree, and those who have a college degree but no postgraduate study.

He won among conservatives and moderates, first-time voters and those who've voted before and registered Republicans and those who are undeclared.

Trump won 6-in-10 voters who said they were looking for an outside candidate.

ABC highlighted the following important fact about Donald Trump’s base of support in New Hampshire:

Two-thirds said they support Trump’s proposal to temporarily ban Muslims from entering the country. He won 42 percent of their votes.

The PEPS follows prior research and measures resentment toward African Americans and immigrants with statements like “blacks could be just as well off as whites if they only tried harder” and “it bothers me when I come in contact with immigrants who speak little or no English.” It also contains a measure of ethnocentrism developed by Donald Kinder and Cindy Kam, which compares how favorably respondents rated whites to how favorably they rated minority groups. ...

Most striking is how each of these measures strongly correlates with support for Trump. The graph below shows that Trump performs best among Americans who express more resentment toward African Americans and immigrants and who tend to evaluate whites more favorably than minority groups.

Moreover, statistical models show that each of these three attitudes about minorities contributes independently to Trump’s vote share.  So much so, in fact, that GOP primary voters who score in the top 25 percent of their party on all three measures are 44 points more likely to support Donald Trump than those who score in the bottom 25 percent...

... These findings also support the idea that Trump’s appeal mirrors Nixonian populism’s blend of racial conservatism with tacit support for the welfare state — a blend often seen in Europe’s right-wing populist parties as well as the presidential bid of George Wallace.

Donald Trump’s popularity is vexing to Republican elites (and the mainstream corporate news media) because he combines the nativism, racism, pro-big business attitude, wants more tax cuts for the wealthy, militaristic nationalism, and out-group animosity that typifies mainstream conservatism, with promises to expand healthcare, enact trade protectionism, fix the nation’s infrastructure, and improve the lives of the (white) working class.

Donald Trump’s particular version of right-wing populism is a direct threat to present day Republican orthodoxy. However, “Trumpania” is not a new phenomenon. Donald Trump’s political vision is simply a 21st century version of what sociologists, historians, and others have described as right-wing producerism.

Producerism is a belief that society is divided between “makers” and “takers.” Right-wing producerism tries to mobilize “real citizens” against “evil” parasites on the “bottom” of society such as the poor, people of color, immigrants, gays and lesbians, “the lazy” and any other subordinate group that can be identified as the Other.

Producerism also targets the enemies above, i.e., corporations, Wall Street, international bankers and finance, political “insiders,” government “bureaucrats” or “elites” who are imagined as working against the interests of “the people.”

As explained by Chip Berlet and Matthew N. Lyons in their book “Right-Wing Populism in America: Too Close for Comfort,” “producerism, with its baggage of prejudice, remains today the most common populist narrative on the right, and it facilitates the use of demonization and scapegoating as political tools.”

In addition to right-wing producerism, Donald Trump is also channeling Herrenvolk ideology with his explicit promises to protect the white working and middle class from “those people” (be they supposedly rapine and violent immigrants; scheming Chinese; or nebulous brown Muslim terrorists in ISIS and al-Qaida) while also ensuring that there is a social welfare state, economic mobility and expanded healthcare for “real Americans.”

In a Herrenvolk society, the racial in-group is fully enfranchised while the racial out-group is marked as an “anti-citizen” that is not worthy of full democratic rights.

Moreover, the racial Other’s subordinate status is used as a marker for elevating the status and power for the dominant racial group. Centuries of chattel slavery and then Jim and Jane Crow were means through which white Americans defined the meaning, worth and boundaries of citizenship. Historically and to the very recent present, American democracy and the exclusive white male franchise were not contradictions in a society organized around the Herrenvolk principle.

Citizenship and belonging are demarcated along racial lines in a Herrenvolk society; benefits, resources, rights and support from the state are allocated by the boundaries that separate “us” from “them."

In many ways, Donald Trump’s right-wing populism is a return to an understanding of the modern American welfare state that dominated from the end of the Civil War through to the Great Society. And while the American welfare state has certainly “evolved” in an era of neoliberalism, extreme wealth and income inequality, surveillance, punishment and austerity, there are a litany of programs that disproportionately benefit the white working, middle, upper classes, and rich as compared to non-whites. This, what is now termed the “submerged state," is a de facto type of welfare for (white) America. As public policy, the submerged state is heavily protected as an “entitlement” while simultaneously being decoupled from the history of white privilege and white supremacy that birthed, and in some ways, continues to sustain it. White voters are attracted to Donald Trump because they are afraid that the benefits of the submerged state will be taken away from them.

As his increasing popularity demonstrates, Trump’s supporters are largely composed of frustrated and alienated working-class white Americans who are embracing authoritarian values.

Writing at the Democracy Journal, Jordan Michael Smith made the following incisive observation about this dangerous trend:

A white lower-educated supporter on the lower-income scale is not what we normally term middle-class: It’s more aptly called the working-class. Which is why William Galston of the Brookings Institution analyzed the data and wrote that “Trump is the staunchest champion of the white working class that American politics has seen in decades.” Combine their class with their self-declared conservatism and you have the people Lipset described.

According to Lipset, “authoritarian predispositions and ethnic prejudice flow more naturally from the situation of the lower classes than from that of middle and upper classes.” These were the people who formed the base of the Nazi labor unions (Lipset was writing in 1959), the White Citizen’s Councils in the segregated American south, and race rioters in England. Lipset continued, “working-class groups have proved to be the most nationalistic and jingoistic sector of the population. In a number of nations, they have clearly been in the forefront of the struggle against equal rights for minority groups, and have sought to limit immigration or to impose racial standards in countries with open immigration.” This, of course, describes a Donald Trump rally almost perfectly…

Donald Trump’s right-wing producerism hustle has many ugly antecedents … and some of them are from the worst and most dark parts of American history. “Trumpmania” is a combination of the Know-Nothings, the Republican Southern Strategy and a type of right-wing populism that views people of color and non-white immigrants as toxins in the body politic.

Donald Trump promises to “Make America Great Again.” Trump cannot do this without excluding millions of Americans who are not white and Christian. In practice, Donald Trump’s right-wing populism will shrink the boundaries of political community. This will make for a less vibrant, rich and productive American society. While Trump promises health, strength and vitality for his voters, the reality is that working-class authoritarianism and right-wing populism are poisons to a modern cosmopolitan society.