Don’t straightwash Deadpool: It’s time for Marvel to let a queer superhero be queer on film

Could pansexual Deadpool get a male love interest next? Star Ryan Reynolds thinks so—and it would be a gamechanger 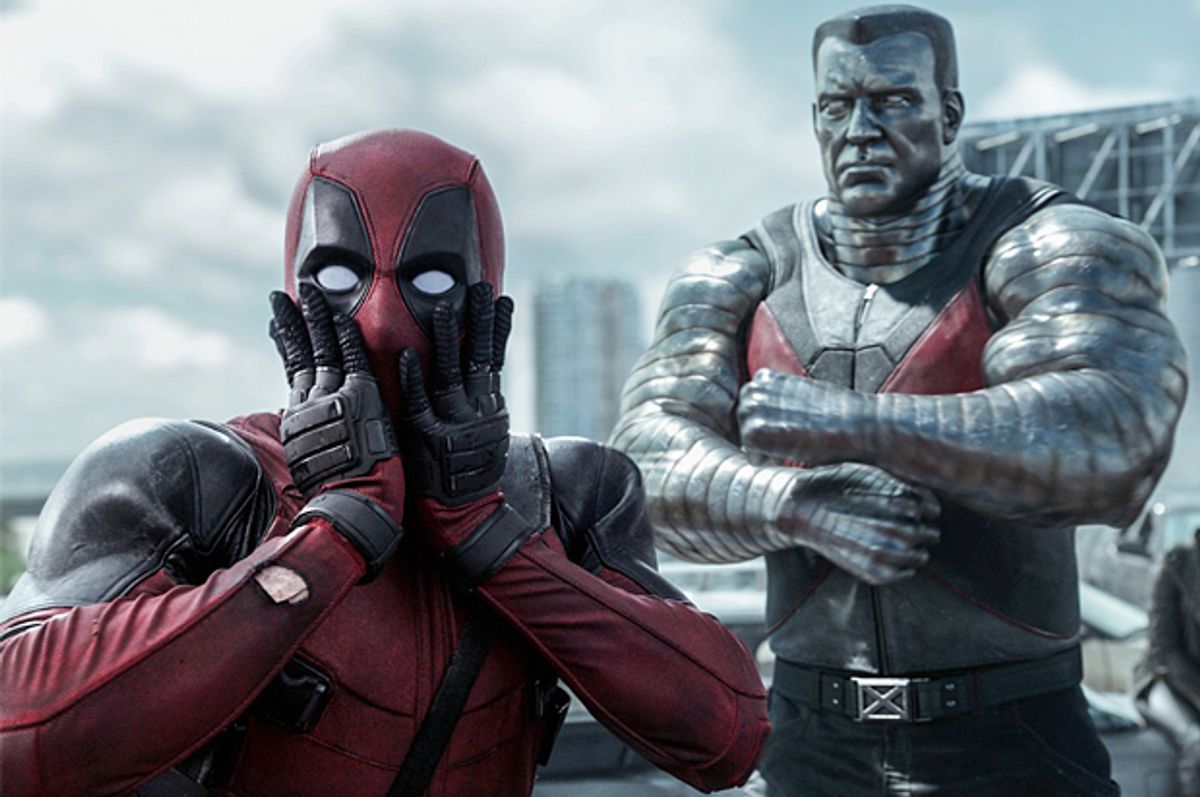 The famously sarcastic Marvel character, often described as “the Merc with a mouth,” is pansexual in the original Marvel comics. However, his fluid sexuality is merely winked at in “Deadpool,” the character’s second stint on the big screen (following 2009’s “X-Men Origins: Wolverine”). Tim Miller’s film depicts Deadpool in a monogamous relationship with Vanessa (Morena Baccarin of TV’s “Homeland”). In the movie, Deadpool is an indiscriminate flirt, but when it comes to the possibility that the character could actually engage in queer intimacy, the film is a total tease.

When asked if the character (neé Wade Winston Wilson) will explore his sexuality in future sequels, Reynolds mentioned he is open to the possibility. “In the future, I hope we get to do that more,” he said. On the particular topic of Deadpool getting a boyfriend, Mr. Reynolds indicated that it would be “nice.” “I certainly wouldn’t be the guy standing in the way of that,” the 39-year-old actor responded. “That would be great.”

Ryan Reynolds’ response might amount to a clever bit of queerbaiting to drum up press for the film, but if his openness to pushing boundaries sparked excitement on the Internet, it’s because LGBT audiences are sadly used to queer heroes being straightwashed for mass consumption. To date, Hollywood has never produced a film starring an explicitly non-heterosexual superhero (unless you count 1981’s “Zorro the Gay Blade?”), despite the fact that comic books have produced a number of out characters—including Northstar, Mystique, Loki, Destroyer, and Harley Quinn. It’s time to change that.

If there’s a gold standard for “straightwashing,” the widely accepted term for erasing a queer character’s sexuality, it’s got to be what Hollywood did to John Constantine, the protagonist of the “Hellblazer” series. The DC comics character has been adapted twice—first as a 2005 movie starring Keanu Reeves and then as a short-lived NBC show featuring Matt Ryan as the iconic anti-hero.

Both versions of the character are heterosexual—or at least straight by default. In Francis Lawrence’s “Constantine,” the titular protagonist has a strictly platonic relationship with Angela (Oscar-winner Rachel Weisz), a detective investigating the death of her twin sister. For the later TV adaptation, showrunner Daniel Cerone was more overt about his decision to play down the character’s queer history. “Within this tome of three decades [of comics] there might have been one or two issues where he’s seen getting out of bed with a man. So [maybe] 20 years from now? But there are no immediate plans,” he told press.

After the character first debuted in 1985, Constantine has had relationships with both women and men—with the character’s bisexuality first alluded to in a 1992 comic. According to the Daily Dot’s Gavia Baker-Whitelaw, “it took until 2002 for ‘Hellblazer’ to show John Constantine in a full-blown love scene with another man.” This seems to prove Cerone’s assertion correct. If producers were to adhere strictly to the comics’ timeline, the TV show would have had its first gay sex scene in 2031.

But the comic book landscape of today is drastically different than when Constantine was first created three decades ago. In 1992, the “X-Men” series’ Northstar (Jean-Paul Beaubier) became the first character to acknowledge his homosexuality. “For while I am not inclined to discuss my sexuality with people for whom it is none of their business, I am gay,” Beaubier states in “Alpha Flight #106.” Twenty years later, Northstar would celebrate comics’ first gay wedding, when the character married his long-time partner, Kyle Jinadu, in “Astonishing X-Men #51.”

Even Alan Scott—aka one of the non-Hal Jordan incarnations of “The Green Lantern”—came out as gay in 2012.

Despite comics’ seeming queer renaissance, LGBT characters continue to face obstacles both in print and onscreen. In 2013, writers J.H. Williams and W. Haden Blackman parted ways with the “Batwoman” series after DC mandated that the pair kill a storyline featuring Kate Kane’s wedding to her fianceé Maggie. According to Williams and Blackman, they were “prohibited from ever showing Kate and Maggie actually getting married.”

And outside of Northstar, Marvel has balked at allowing other characters to come out as queer. In 2010’s “Hercules: Fall of an Avenger,” a brief aside alleges that the Greek demigod had a fling with Northstar. On the comic’s very first page, a number of Hercules’ one-night stands—including Snowbird and Black Widow—gossip about their sexual trysts with the musclebound superhero. In one panel, Northstar is asked whether he and Hercules ever hooked up, and Beaubier abruptly avoids the question: “Is that the time? Gotta go!”

This isn’t the only instance that writers have toyed with Hercules’ sexuality (who was depicted as bisexual in ancient myth). In an alternate universe timeline, Hercules strikes up a romance with Wolverine. A panel depicting the two characters embracing reads: “We were the world’s greatest heroes… and the day we slew the worst monster who ever threatened the dominion of Canada… we revealed our love.”

In each instance, the treatment of the character’s sexuality is playful and more than a bit coy, but the implication is clear enough that Hercules is listed as “bisexual” on the Marvel Wiki.

Even so, Marvel has been extremely reluctant to integrate his sexuality into the core storyline, insisting that the character is, and always will be, heterosexual. “Hercules and James Howlett's relationship in ‘X-Treme X-Men’ took place in a unique alternate universe, similar to how Colossus was gay in the Ultimate Universe but is straight in the 616,” Marvel Editor-in-Chief Alonso said. “Same goes for Hercules here.”

This continued erasure of queer narratives has been extremely frustrating for fans, especially at a time when publishers like Marvel have been trumpeting a new era of diversity in their comics. As part of its All-New, All-Different Marvel initiative, Alonso promised, “Our new stories reflect the world outside your window in all its diversity.” But as the Hollywood Reporter’s Graeme McMillan pointed out, the new titles released as part of that mission all featured straight protagonists:

“Of the 51 officially announced All-New, All-Different Marvel series so far—Marvel has promised 55-60 new launches as part of the initiative, which will run for a number of months starting in October—there are none that feature a confirmed, out LGBTQ solo lead. There are ensemble titles featuring LGBTQ characters, including ‘All-New X-Men,’ ‘Ultimates’ and ‘New Avengers,’ but every single series spotlighting a solo character is based around a character who is heterosexual or, in the sole case of ‘Angela: Asgard's Assassin,’ intentionally ambiguous.”

But if Marvel has been criticized for its lack of LGBT protagonists, one way to address that is to do something that seems simple: Finally allow one of its onscreen heroes to be queer. In 2013, actor Andrew Garfield first sparked the pansexual superhero talk when he asked why Spider-Man’s love interest, MJ, couldn’t be male. “The beauty about Spider-Man, for me, is that he’s covered head to toe,” Garfield told Mic. “That’s why everyone thinks it could be them in that suit. You don’t see skin color. You don’t see sexual orientation.”

Marvel, however, didn’t share the same sentiment. In a private mandate directly from Stan Lee himself, the comic book publisher dictated that Peter Parker must always be straight and white.

Likewise, Ryan Reynolds can hope and wish that Deadpool gets a boyfriend all he wants, but that will be meaningless unless the executives at Marvel are willing to let it happen. While celebrities like Miley Cyrus, Anna Paquin, Evan Rachel Wood, Sarah Paulson,  and YouTube star Laci Green are bringing embracing bi- and pansexual identities to a wider audience than ever before, the comic book and film industries are struggling to catch up with the Way We Define Now.