The brainwashed rebels of the Bundy siege: Why something like this was eventually bound to happen

In a conservative bubble that encourages conspiracy theories and violence impulses, it was only a matter of time 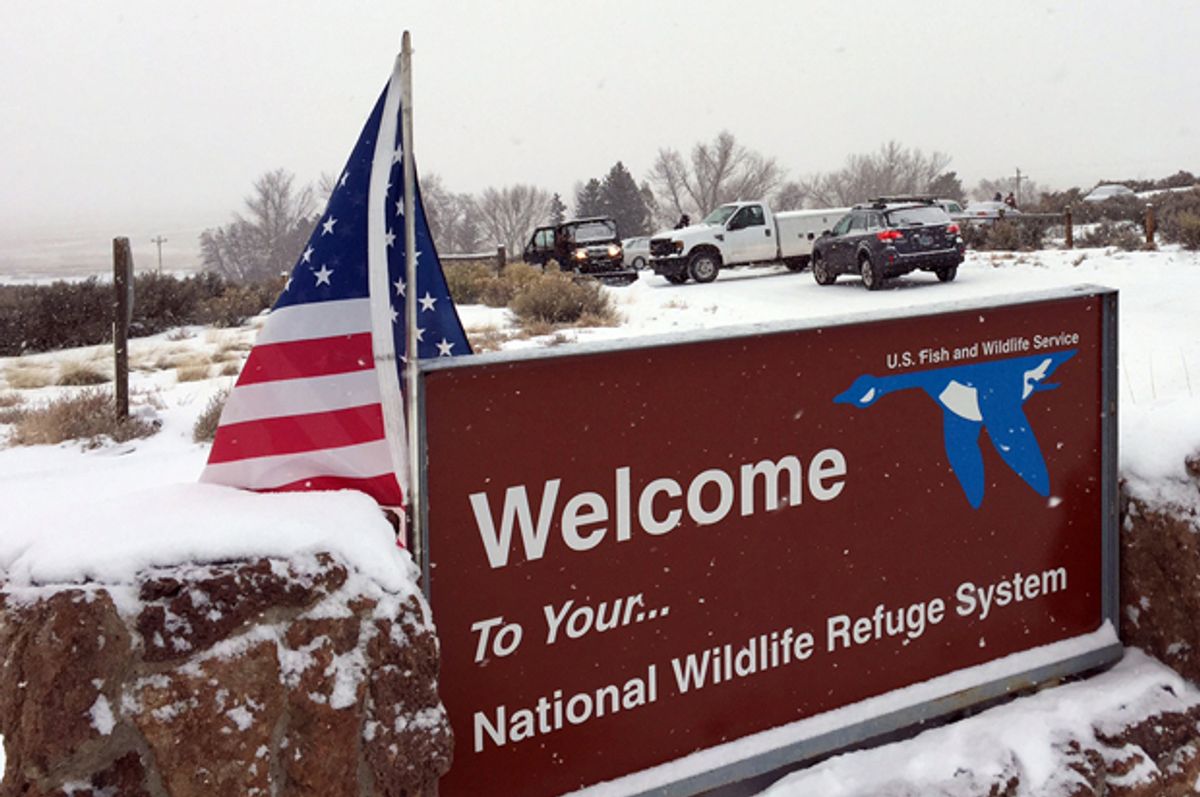 The Oregon militia's doomed-to-fail occupation of the Malheur National Wildlife Refuge has come to a predictable end. The last of the military cosplayers has surrendered, while the patriarch of the movement, Cliven Bundy, was arrested on his way to join the ill-fated gaggle of brainwashed gun fetishists.

On Thursday, David Fry, Jeff Banta and Sean Anderson emerged from the refuge and peacefully surrendered to the FBI, leaving their firearms behind.

The 40-day Oregon occupation lasted 40 days too long. Of course, it was all bound to end one way or another, whether by a law enforcement assault or by an eventual surrender. The notion of successfully mounting a secessionist rebellion against the federal government was always little more than a joke, with firepower. The odds of success were exactly zero. And those odds underscored, if not entirely defined, the childish delusions of the occupiers.

Knowing the zealotry of law enforcement when faced with, for example, a man who merely ran away after being pulled over for a broken tail light and was punished for this fight-or-flight reaction with five bullets pumped into his back, it's impossible to overlook the disparity between the Walter Scott shooting and the reality that these fully armed militiamen in Oregon were allowed to peacefully walk away from their Mickey Mouse clubhouse. Sure, LaVoy Finicum's participation ended badly, but the so-called Tarp Man was an outlier, and, let's face it, Finicum was gunned down toward the end of the lengthy timeline of events. In other words, Finicum was allowed to threaten government officials with his military-style assault rifle for a full month before he was finally neutralized.

Pragmatically speaking, I get it. The government's hesitance to spark another Ruby Ridge or Waco was well argued. But from the outside, it's difficult to see how there's justice in allowing a heavily-armed militia to occupy a national park, while unarmed peaceful protesters in Ferguson were routinely tear-gassed. The message? If you're fully armed with semi-automatic rifles, and if you're white, you can freely assemble in protest for 40 days -- and bring all the guns you want. But if you're unarmed and black, you're swiftly brought to justice. With fatalities.

Frankly, more Americans would be outraged by the flagrant injustice of it all if it weren't for the fact that the occupiers mounted an effort that more closely resembled a grown-up version of a Little Rascals storyline. Adults behaving like children behaving like adults. The occupation's patina of make-believe contradicted the seriousness of what was underway. There were times when it was nearly impossible to take the Oregon cospayers seriously. These were grown-ups, many of them with educated backgrounds, who believed that they could spark a revolution by seizing what amounted to the visitor's center at an obscure wildlife refuge in the dead of winter. Reinforcing the self-satirical nature of the event -- extending the Little Rascals metaphor -- the occupiers even attempted to form their own shadow government and kangaroo court. Given a few more weeks, I half expected them to form the Oregon chapter of the He-Man Woman Haters Club, complete with chairman Spanky. At the very least, I was half-hoping they'd be trolled by Civil War re-enactors and comic-con dress 'em up hobbyists in Star Trek regalia.

Clearly, these were gun-range mallrats -- radicals who've been brainwashed in part by the "conservative entertainment complex," to borrow David Frum's term. They've been instructed by a never-ending conga line of hate-radio shows and apocalyptic Fox News telecasts.

A new documentary film by Jen Senko dropped recently, titled "The Brainwashing of My Dad," covering a phenomenon that helped precipitate the occupation: the poisoning of otherwise decent Americans by right-wing media agitprop. The documentary follows the life of Senko's father who was once a Kennedy Democrat and, through daily assaults by right-wing radio and television screeching, transformed into a racist conservative zealot. Similarly, it's not difficult to diagnose the Oregon militia as having been heavily brainwashed by the eliminationist rhetoric of both conservative entertainment and the Republican Party itself, with its "Don't retreat, reload" bumper sticker slogans and backed with the revolutionary predictions of conspiracy-theory profiteers like Glenn Beck and Alex Jones.

Take occupier David Fry, for example. While attempting to negotiate the terms of his surrender, Fry reportedly said, "They haven't addressed my concerns." When asked to elaborate, Fry replied, "I have a legit job, pay taxes, but I pay for abortion." And there it is. The Republican Party establishment has been lying to him and his pals about that and countless other issues for decades. So, we have to reiterate: Per the Hyde Amendment, it's illegal for the government to use taxpayer money to fund abortions. Regardless of whether that's a righteous law, it's reality. But you'd never know it by watching Fox News or listening to Rush Limbaugh. Fry, like so many others, has been brainwashed and, not unlike the subject of Senko's documentary, it's unclear whether he and countless others can be deprogrammed and re-integrated into realm of objective reality. Probably not.

Then again, as creepy, dangerous and pathetic as they are, it's impossible not to laugh at their childishly impressionable behavior -- these too-easily-influenced middle-aged white guys with their InfoWars swag and their life-sized Valley Forge diorama in Oregon. Especially now that it's all over, with the culprits having achieved exactly nothing other than highlighting the monumental dysfunctions of both our political media and our criminal justice system.