The complex life of Kanye: "The Life of Pablo" is West's triumphant turn to hip-hop middle age — with some old habits that won't die

I watched his release in a theater in Geneva, Switzerland—here's how Yeezy's album show resonated across the pond 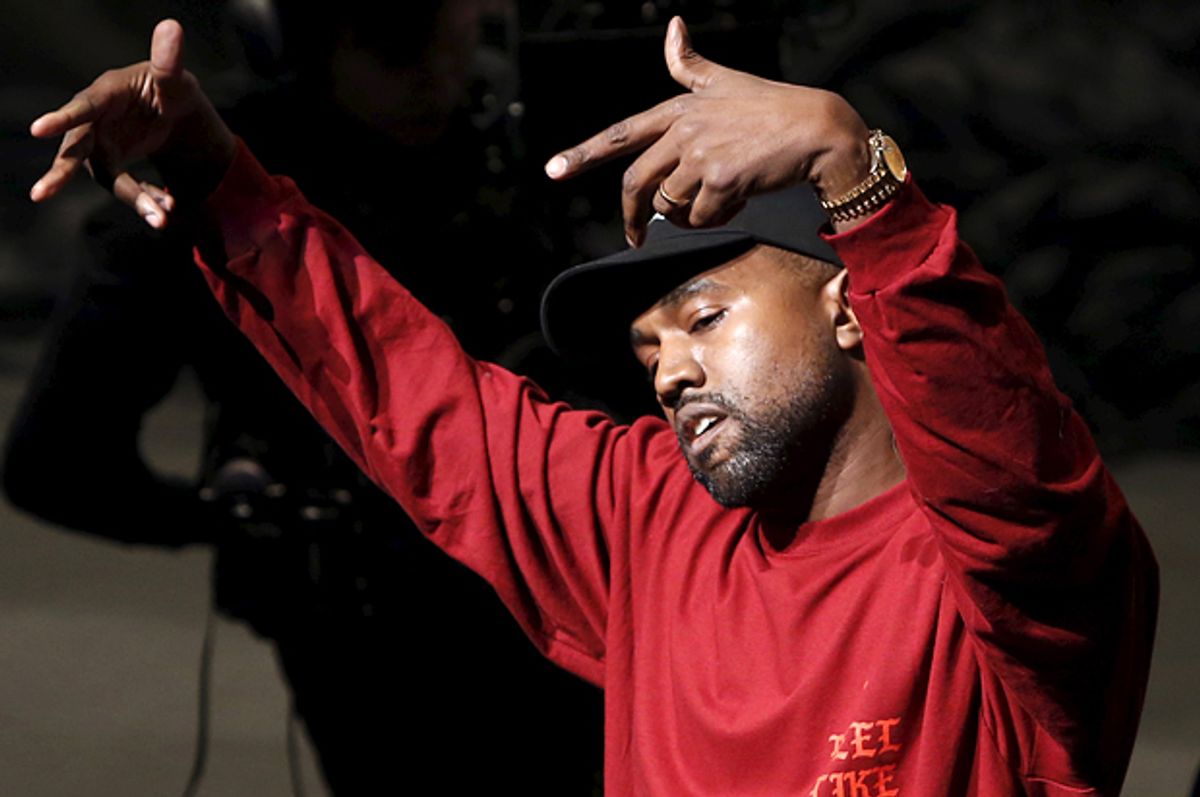 Kanye West dances during his Yeezy Season 3 Collection presentation and listening party for the "The Life of Pablo" during New York Fashion Week, February 11, 2016. (Reuters/Andrew Kelly)
--

“The Life of Pablo”, Kanye West’s long-awaited seventh solo effort, is finally upon us. Kanye West premiered the new album yesterday in front of a sold out crowd at Madison Square Garden, while simultaneously live-streaming the event on Tidal.

If it feels like you’ve waited a long time for this, it’s likely because plans for a new record were announced back in 2014. Between the release of “All Day” last year, tales of an ever-changing roster of collaborators, sporadic hints on Twitter and multiple title changes, Kanye provided a master class in building up the massive hype that already surrounds everything that he does. After months of speculation, fans were more than ready to find out what exactly Yeezy had in the works.

Never one for a simple statement, Kanye announced last week that the show would be broadcast live to cinemas across 26 countries outside the U.S. Try to imagine the energy of a sold out show at the world's most famous arena featuring one of the world’s most popular recording artists in a city that never sleeps. Got it? Now try to imagine the polar opposite — you’ll get a rough idea of what it was like to watch the action unfold in Geneva, Switzerland, one of the most peaceful cities on Earth.

Waiting in the lobby at the Pathé Balexert cinema, there was no fanfare to suggest that anything out of the ordinary was taking place until small groups of very stylish young people started showing up. Many of them had learned about the event on social media and seized the opportunity to dress up, have fun and be a part of a moment.

The theater in Geneva wasn’t at capacity, but there were enough people to constitute a decent turnout for a Thursday night at 10 p.m. Watching the seats fill up in Madison Square Garden from an ocean away set the mood, and when the Kardashian-Jenner clan made their entrance there was an audible gasp from the audience. When Kanye finally took to the floor, flanked by Travis Scott and Pusha T, my wing-woman told me that her heart was racing from the anticipation.

The first taste was “Ultra Light Beam,” a swelling, religious experience with assists from Kelly Price, Chance the Rapper and a heavenly chorus. It’s a strong opener — “This is a God dream, this is everything” serves as an affirmation of Kanye’s current state of mind. Next up were the Metro Boomin-produced "Father Stretch My Hands (Parts 1 and 2)." While Kanye proclaimed that he just wanted to “feel liberated,” a huge tarp covering a constructed stage on the floor of the arena pulled back to unveil a crowd of models dressed in items from the Yeezy Season 3 line, in a segment of the show choreographed by Vanessa Beecroft. Joined by the incomparable Naomi Campbell, the models were stunning in their diversity of height, gender and complexion — calling attention to the exclusivity of fashion industry.

A spirit of inclusion throughout the experience can't be written off as accidental, and it extended to the music. While "Yeezus" was light on guest features, several heavy hitters lined up for "TLOP," including Kirk Franklin, Chance The Rapper, The-Dream, Travi$ Scott, Rihanna, Young Thug, Kid Cudi The Weeknd, Ty Dolla $ign and newcomer Desiigner. Listeners were even reacquainted with the sweet vocals of Frank Ocean.

While fashion design has become a much more visible facet of Kanye’s artistry, the direction of his new music was harder to predict. By “Freestyle 4” we had been given tastes of many great ideas that were yet to be explored fully. "Pablo" seems to pick up where "Yeezus" left off sonically, with the Chicago House influences of his previous work especially apparent on “Fade,” which as of today was added to the final tracklist. Fans of the “Old Kanye” will be delighted to hear that he still has a penchant for samples – this time blending excerpts from “Bam Bam” by Sister Nancy and “Do What You Gotta Do” by long-term favorite Nina Simone.

Lyrically, Kanye is all over the place. On “Freestyle 4” he is boastful, challenging anyone who thought he was done to “wake up” and laying all his eccentricities bare. Things take a turn for the worst on “Highlights,” which has one of the most exciting beats on the album but trades in the tiring women-as-objects trope that is becoming too familiar, for all the wrong reasons. In the wake of his off-base comments about his ex-girlfriend Amber Rose, part of a now-deleted Twitter tirade against Wiz Khalifa last month, these problematic views of women are starting to grate. Interestingly, the Taylor Swift dig on “Famous” that is causing a lot of buzz stateside barely elicited a response in Geneva. That Kanye might not be as controversial of a figure abroad as he is in the U.S. should be contemplated when discussing his global appeal.

Logistically, things went well enough. Visuals in the Geneva theatre were uninterrupted throughout the stream, but while audio levels must have been fine at MSG, over live-stream they were erratic to the point of distraction – something he would no doubt be unhappy with. Given the sheer magnitude of the rollout, a few technical glitches are understandable and even pardonable. Yet several songs that seemed to cut off right when they were getting good. It’s hard to tell what those sharp transitions will remain on the final cut, but there’s definitely the sense that these glitches may be reflections of the chaos that surrounded "Pablo" right to the end.

One could consider “The Life of Pablo” as Kanye’s arrival at the middle age of his career. His subject matter has evolved to echo big changes in his life: Mega-stardom, great wealth, scandals “The Life of Pablo”, heartbreak, loss, fatherhood and marriage. As a producer he has matured way beyond being the guy who “flips soul beats,” and he is confident enough to incorporate everything from reggae dancehall to electronica to soul into his work – often on the same track. But, as in life, middle age is a time to take stock of what’s happening around you and re-evaluate how you fit in.

A cursory glance at today’s top rappers reaffirms that hip-hop is a young person’s game. Notably present at Kanye’s side were Travis Scott, Young Thug and Vic Mensa, with an average age of 23. It was somewhat symbolic to see Kanye hand over control of the night to his young colleagues when he was done. From there, the session turned into the large-scale equivalent of the late hours of a house party, when people start jostling for control of the aux chord. While many of these rappers are popular in their own right, it was heartening to see Ye share his immense platform with his successors — and when Young Thug’s new track garnered one of the best reactions of the night, it was definitely a cause for pause.

If anything, it is a smart move on Kanye’s part to bring these young stars into the fold as collaborators, not unlike what Jay Z did for him early in his career. It’s obvious that the younger members of his star-studded entourage have a great deal of respect for him as an artist and as a person. Going forward, it will be interesting to see what role he takes on as the hip-hop landscape shifts rapidly around him.

Kanye West – professional gamer, perhaps? Last night he teased a video game that he’s working on in honor of his late mother Donda. He also indicated that he designed the outfits worn by his family, in case there was any doubt about how seriously he takes his design work.

Early reports from Tidal show that the event was streamed by more than 20 million viewers. Combined with the fans at the arena and those watching in countries as far flung as Australia and Macedonia, it will surely go down as the biggest listening party of all time. Still, it’s unlikely that large-scale releases like this will replace the surprise drop as the new trend any time soon. For one, the shift to huge tech-driven events has been rocky of late, but more importantly, the risks associated with such an endeavor can only really be assumed by artists of a certain caliber.

Business aside, pop culture is built on moments; at its best it gives people from anywhere in the world the opportunity to feel like they’re a part of something big. Yesterday’s event was a huge moment as evidenced by the cheers and the tears, both within the arena and elsewhere. It’s entirely too soon to tell if “The Life of Pablo” is "the album of the life" as predicted. It seems like it’s still being be mastered, after which listeners will need time to decide where they stand. Whether or not it’s a classic, Kanye West gave us something new to sing to, dance to, pick apart and debate – together. On that basis alone he has already succeeded.