This is why Hillary's losing: The failing strategy that could cost her everything -- and the Bernie Sanders ad that exploits it perfectly

Sanders' campaign is about empowering people. Clinton's is about her specific experience. She needs less I, more we 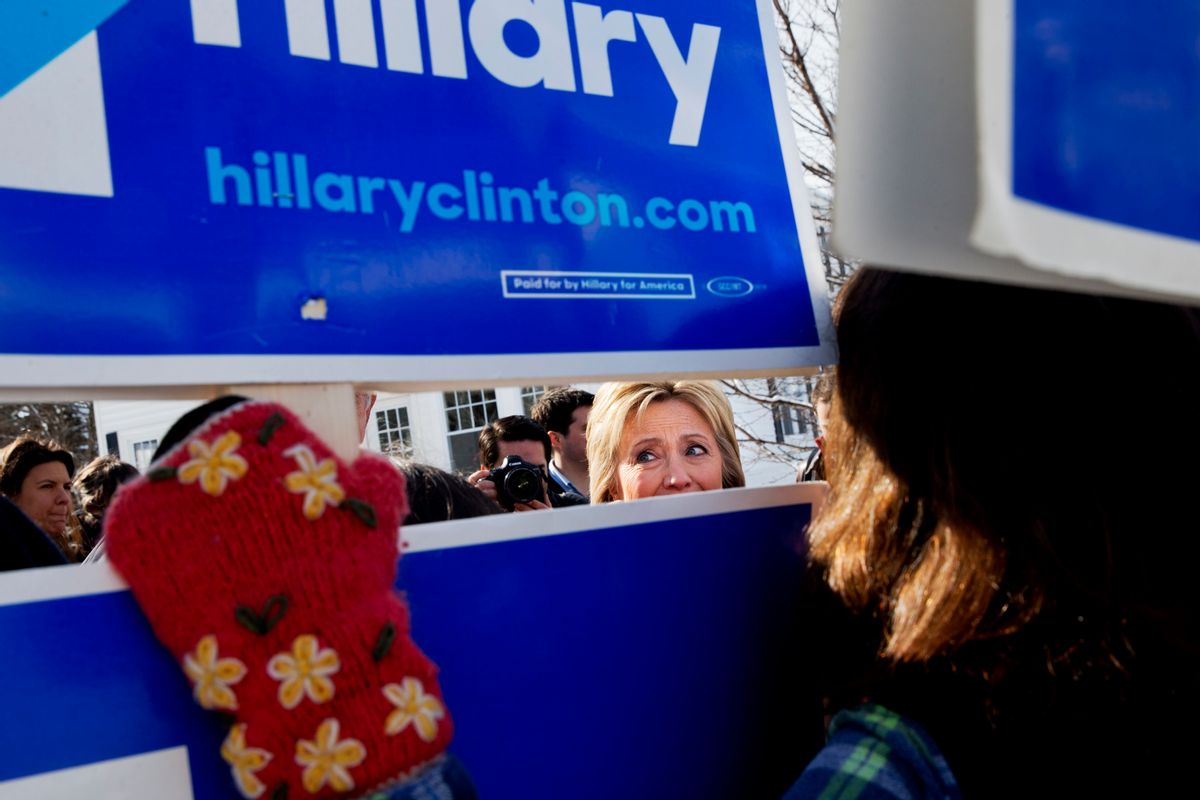 Democratic presidential candidate Hillary Clinton peeks through signs of hers as she greets supporters during a campaign stop in a Manchester, N.H. (AP)
--

Democratic presidential candidate Bernie Sanders has a new TV ad out this week, and it shows in vividly brilliant terms exactly why he is overwhelming Hillary Clinton’s traditional establishment-style campaign. His campaign is about us; it’s not about him. He doesn’t highlight his experience or plans to get things done. He channels all of our desire to make our country better and make it work for everyone. His “us” is all of us normal Americans against “them,” the broken system and partisan political establishment.

Sanders is not the only one with this kind of formula of success. Republican front-runner Donald Trump is doing much the same thing. The difference is that Trump’s “us” doesn’t include everyone. His us is mostly just straight, white Christians. His “them” isn’t just the political establishment, it’s the people who are different from his "us." His "them" includes immigrants, Muslims and anyone else he can find to blame our country’s problems on. His "us" doesn’t include enough voters to win a national election, but he sure can win a Republican primary because it’s a party of mostly straight, white Christians.

Hillary Clinton was once the unbeatable candidate, but her inevitability has dissolved because of her campaign’s inability to connect with voters and include all of us on a personal level. She actually started the campaign off on the right foot. Her “everyday Americans” announcement video and early campaign theme struck the right tone. It was essentially, “It’s about you and me, America. Let’s work together to make our country better.” Hillary Clinton’s campaign went south went she started making it about her and her experience.

Clinton’s new slogans reflect a shift away from everyday Americans. Slogans such as “Fighting for Us” or her hashtag “#ImwithHer” don’t include her with us. Why not “Fighting Together” or “She’s with Us”? She shouldn’t be removed from us, it should be “we’re in this together.” It’s not just slogans that separate her from us, it’s her language. She regularly speaks in the first person singular, “I,” while her opponent almost always says, “we.”

Why the shift? I suspect that the campaign received great feedback after her stellar performances in the first debate and the Benghazi hearing, and they saw that her experience and unmatched depth of knowledge are their best assets. Indeed, they are her best asset, but making the campaign about her preparedness to be president puts the focus in the wrong place.

When a campaign is about the candidate, then that shines the light on them. That light reveals what we like about them, but it also reminds us about everything we dislike about them. Sanders isn’t making his campaign about him, and that’s why voters aren’t focused on the fact that he’s a 1960s-era radical socialist, who now wants to be commander-in-chief after being a conscientious objector during the Vietnam War.

Clinton has also employed the old partisan language of the broken political establishment by recently ranting on about how our country does better under Democrats than under Republicans, and she’s a good Democrat and Bernie’s not. She’s also embraced high-profile endorsements from elected officials and the political establishment in Washington. That only serves to remind us that she is not us. She’s them. She’s part of Bernie’s “them.”

So, by making her campaign about her and her experience the campaign inadvertently reminds America what they don’t like about her. Then, by embracing the rhetoric and people of the broken political establishment, Clinton paints herself clear on the side of Sanders’ them. That’s why her campaign is repelling voters, especially politically disenchanted young voters, and driving them into the open arms of Sanders.

It’s not too late for Clinton and her campaign to right the ship, return to their campaign for “everyday Americans,” and bring voters together in support of her. But she had better do it fast. Those voters Sanders is reaching with his message about “us” aren’t going to stop turning out to vote for him any time soon.