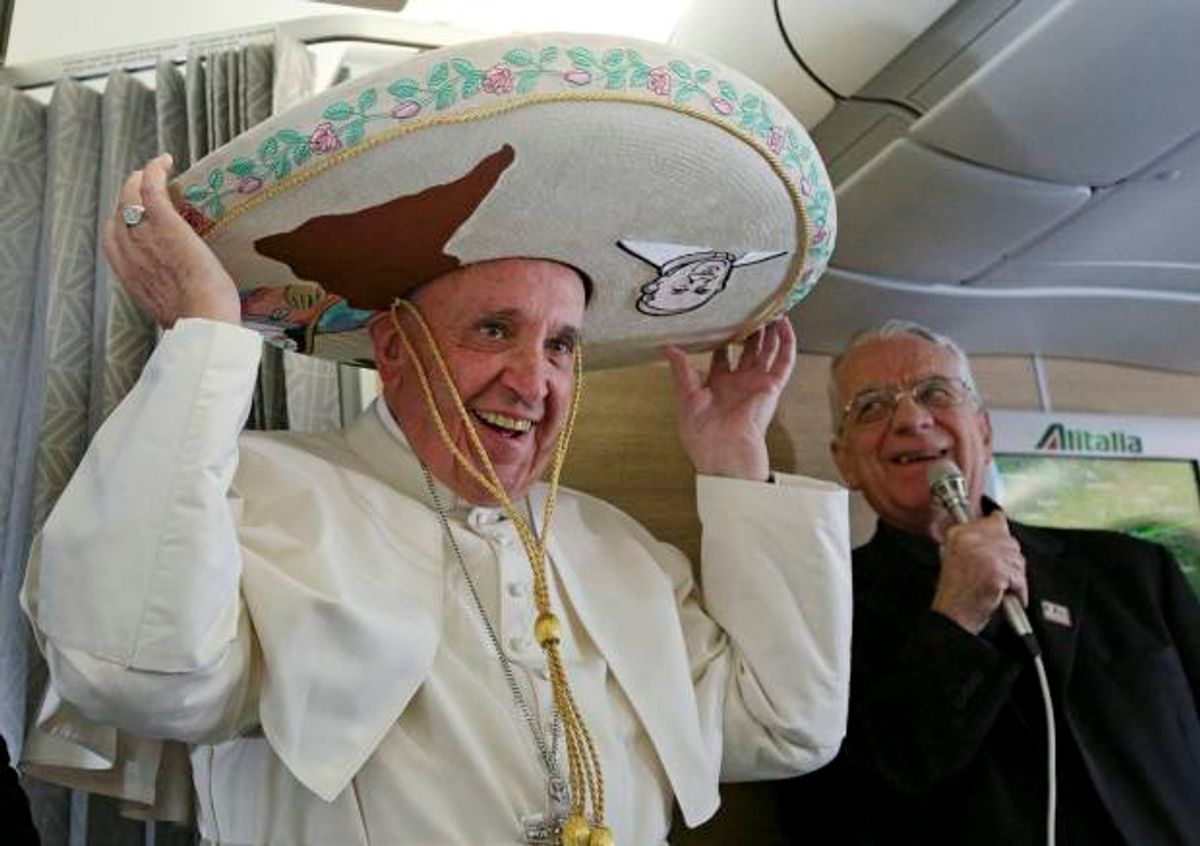 Pope Francis wears a traditional Mexican sombrero hat he received as a gift by a Mexican journalist aboard the plane during the flight from Rome to Habana, Cuba, on his way to a week-long trip to Mexico, Friday, Feb. 12, 2016. The pontiff is scheduled to stop in Cuba for an historical meeting with Russian Orthodox Patriarch Kirill that the Vatican sees as a historic step in the path toward healing the 1,000-year schism that split Christianity. At right is Vatican spokesperson Rev. Federico Lombardi. (Alessandro Di Meo/Pool Photo via AP) (AP)
--

Pope Francis has traveled to Mexico where he will spend nearly a week in the the world's second largest Catholic country and the Republican presidential frontrunner, Donald Trump, is now criticizing the pontiff for daring to reach out to his flock.

The Pope plans to hold a mass at the U.S.-Mexico border next week to call for a more humane approach to immigration.

"He will be calling on us to look with compassion on a group of people who have suffered terribly," said Bishop Mark Seitz of El Paso, Texas, a city that sits across the Rio Grande from Juarez. "And perhaps that will lead people to seek out some different solutions than are now being proposed."

During an interview with Fox Business' Stuart Varney on Thursday, Trump went after Pope Francis' decision to visit Mexico while Trump's campaign continues to rile supporters' anti-immigrant anxieties with promises of a giant border wall to keep out Mexicans.

"Pope Francis is gonna stand at the border with Mexico, standing with the migrants. What do you make of that?" Varney asked Trump.

"I don’t think he understands the danger of the open border that we have with Mexico," Trump told Varney.

“I think Mexico got him to do it because they want to keep the border just the way it is. They’re making a fortune, and we’re losing.”

As recently as last June, Trump still had praise for the pontiff, telling Bloomberg News, "I love his stance, he is so different," before promising to ignore the Pope's call to action on climate change: