Why "Pretty in Pink" endures: John Hughes' classic is more than just another teen movie

The iconic teen romance, screening in theaters for Valentine's Day, offers sharp commentary on class, too 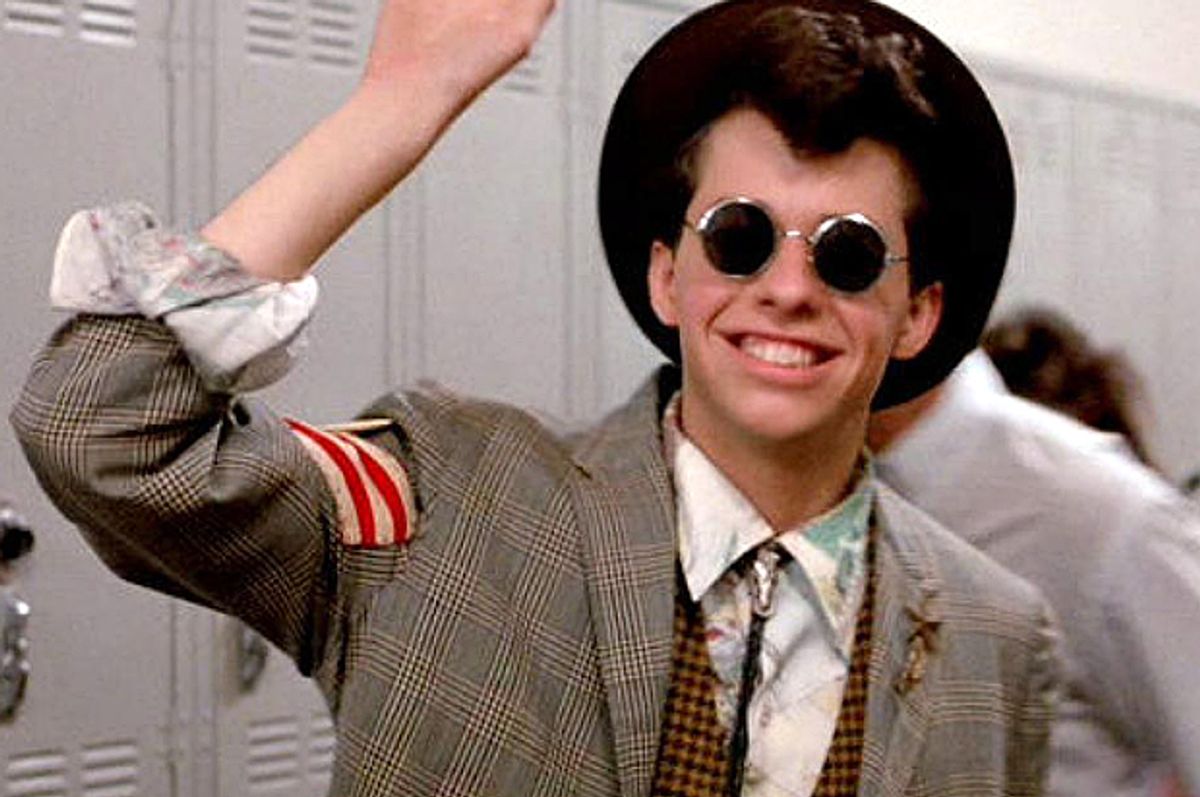 It's no accident that '80s teen movie "Pretty in Pink" is celebrating its 30th anniversary by returning to theaters on Valentine's Day: The John Hughes-written film is a new wave "Romeo and Juliet," following the budding romance of smart-but-uncool Andie (Molly Ringwald) and not-like-the-others rich kid Blane (Andrew McCarthy), who are deeply attracted to each other despite their differing social strata. The wrinkle in this fairy tale is Andie's best friend Duckie (Jon Cryer), who's in love with her and reacts poorly when hearing of her new crush, and the disapproval surrounding the pairing: "My best friend is talking to a mutant," sneers the spoiled, wealthy Steff (James Spader) after spotting Blane and Andie together.

"Pretty In Pink" understandably endures because of the lovelorn triangle between Andie, Blane and Duckie: After all, the latter's anguish at (and response to) being friend-zoned is a timeless, relatable thing. But three decades on, the movie's emotional resonance also stems from the frank way class intrudes on Andie and Blane's romance. Normal teenage anxieties about dating are compounded by their different economic situations. On their first date, Andie is adamant to the point of tears that she doesn't want Blane to see her house, because it's small and shabby, and in a not-as-nice neighborhood. Her response is heartbreaking and deeply affecting, because it comes from a place of shame and embarrassment.

Andie's reticence is no overreaction, because her dealings with the "richies" in her high school are mostly antagonistic. Aesthetically, she is deliberately quirky and alternative: She works in a hip record store, makes her own clothes and wears secondhand shoes—bought for $15, she proudly notes. This frugality doesn't go over well, however. Snobby popular girl Benny (Kate Vernon) accuses Andie of getting her clothes at the "five-and-dime"—pointedly during a history lesson about FDR policies such as The New Deal—bullies her in gym class and, later, is incredulous when she shows up at a party with Blane. This type of utter disdain happens behind Andie's back as well. In a particularly harsh post-party conversation, Steff calls her a "piece of low-grade ass" and threatens Blane that her presence will be friendship-ending: "If you got a hard-on for trash, don't take care of it around us, pal, all right?" Later, Steff coolly dismisses Andie by completely minimizing her: "The girl was, is, and will always be, nada."

Because it is Hollywood, these caricatures can be exaggerated—the popular rich kids are all well-dressed and mean-spirited, with Spader's Steff leading the way in terms of moral bankruptcy. But the skepticism each social group has for the other is very convincing. When Andie asks her friend Jena (Alexa Kenin), "Would you ever consider going out with somebody that had money?" she receives a withering look. At another point, Andie insults Blane by assuming he'll be paying for a record store purchase with an American Express platinum card. Later, Duckie admits that "he's not like the others," in reference to Blane—surprised that he is different (and better) than the pals with whom he associates.

But throughout "Pretty in Pink," characters dismantle the expectations and perceptions associated with class. When Duckie reacts dubiously to Andie's decision to go on a date with Blane, she defends her decision with logic: "If I hate him because he's got money, that's the same thing as them hating us because we don't. Understand?" In other cases, the movie underscores that ignorance is class-blind, and that even underdogs aren't immune to perpetuating ugly stereotypes: When a heartbroken Duckie lashes out toward Andie and Blane with hateful vitriol, in these moments he's no better than the rich kids who oppress him. The latter response is a subtle and sophisticated commentary on the shades of gray built into class stratification, a reminder that pitting opposing economic groups against one another is rarely perfect.

By applying a very adult perspective to adolescent social strata, "Pretty in Pink" continues to resonate with audiences. In fact, the film always transcended its teen movie tag precisely because it grapples with serious real-world complications. These are illustrated with an underrated secondary plotline involving Andie's relationship with her dad (Harry Dean Stanton). With her mom out of the picture—she abandoned the family several years before—Andie has ended up as the responsible adult in her household, encouraging her dad to find a full-time job, making him breakfast and dragging him out of the bed in the morning. In a pivotal scene, Andie and her dad try to come to terms with her mom's absence and her own impending graduation, as well as how he's lied to her about finding full-time work. Her father's fallibility—both career-wise and as a role model—dominates the scene: He's palpably defeated by his own inability to get on with his life and let go of the past, disappointed by his own personal shortcomings.

It's one of the most powerful moments in "Pretty in Pink," as it helps explain both Andie's ambition to escape from her high school hellhole and her wise-beyond-her-years serenity. But it also illustrates another reason why the movie is so brilliant and timeless: The film concerns itself with how teens operate in the world at large—how external societal and cultural forces, not just the vagaries of high school hell, affect their everyday lives. Unlike the isolated characters of another Hughes-written classic, 1985's "The Breakfast Club," the protagonists of "Pretty in Pink" have to deal with their parental pressures, insecurities and emotional crises in an uncontrolled, public environment. Although the movie doesn't sermonize about class warfare and economic disparity, it does demonstrate the realistic ways these things manifest themselves in everyday life—without sugarcoating or relying on flimsy plot devices.

In these ways, "Pretty in Pink" distinguishes itself from a similarly themed Hughes vehicle, 1987's "Some Kind of Wonderful," which is a more simplistic take on high school haves and have-nots, and that same year's "Can't Buy Me Love," which also deals with disparities in popularity. And in terms of timelessness, it rivals 1988's "Heathers," the Winona Ryder-Christian Slater vehicle that skewered the teenage caste system and media hysteria, while depicting the dark side of those clawing toward wealth and popularity. In hindsight, however, "Heathers" was a pivotal film that signaled teen movies' shift toward the surreal, and away from the real-life conflicts and angst faced by adolescents in '80s movies.

In the '90s, films geared toward teenagers often found their interpersonal conflict in the cloistered worlds of high school and its associated extracurricular activities and parties, or else relied on fantastical elements to create tension and action. This didn't mean these movies were vapid or lightweight—"Clueless," "The Craft" and "10 Things I Hate About You" in particular navigated these minefields in smart ways, and comedies such as "Can't Hardly Wait" are riotous fun—but they were infused with an escapist bent. The cultural endurance of "Pretty In Pink" and other weighty '80s movies, however, stems from their insistence on gritty reality over absurdity. Despite its fairytale ending and streamlined plot devices, "Pretty in Pink" is at its core a serious film with rough edges. Only some fashion and music choices date the movie as being from 1986; otherwise, its commentary on how class informs—and, in some cases, dictates—every aspect of people's lives remains relevant today.