Hillary is her own worst enemy: No amount of progressive rebranding can change her record 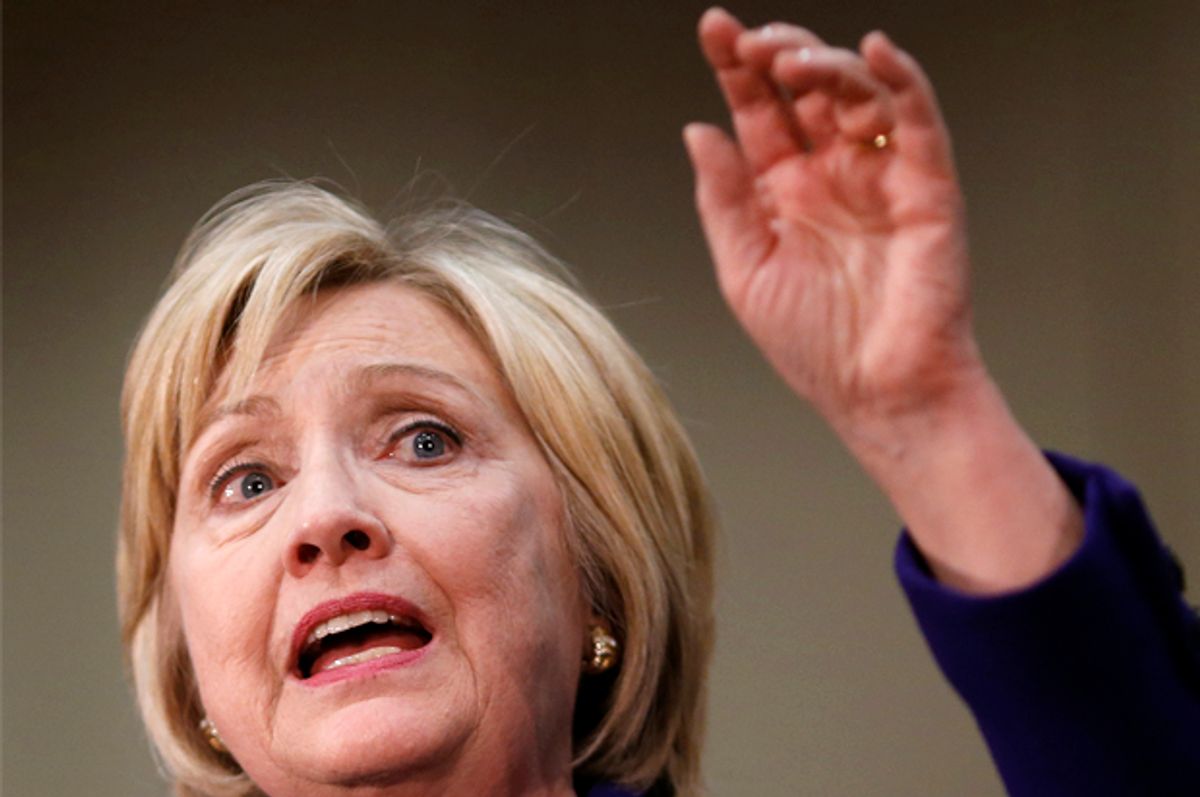 History may show that Hillary Clinton’s efforts to become President of the United States may be bookended by two colossal defeats.

The writing has been on the wall all along. It started the moment stories appeared in June 2014 on Hillary Clinton’s stunning speaking fees – mind you, not the ones paid by Goldman Sachs, but by cash-strapped U.S. public universities.

The way in which these stories, appearing in the New York Times at the time, described the absolute arrogance and imperiousness of her staff in arranging for $225,000 plus fees, along with painstaking minutiae for the event itself.

To this day, her attitude on these speaking fees is one of complete nonchalance, if not flipness. Her best justification is “because I can.” And her protestations today that she had not decided to run for President at the time is completely unconvincing as well. Nobody but true believers buys that.

At a minimum, caution should have prevailed. If Hillary’s much-professed concern about the Republican attack machine had one practical effect on her life and political career, it was to make her more circumspect. And yet, she decided to throw caution to the winds.

At a minimum, the raft of stories about her fees portrayed a politician who had lost her moral anchor. It was as if she had to prove to herself that she should command such high fees. Or that she simply wanted to cash in, as older politicians are wont to do, before retiring.

It is unlikely that Mrs. Clinton was not forewarned at the time by senior advisers. It was clear that such fees would not go down well in a presidential election campaign, given that we live in a decade when most people are treading water financially (which ironically is an integral part of her stump speech).

Nor did the Clintons need the money. Bill has raked in plenty of dough, enough to make the Clintons a permanent part of the (in)famous 1%.

Given that “A” for arrogance is the two Clintons’ middle initial, these warnings did not faze them. They have a longstanding preference to use yes-man (and yes-woman) lackeys as top staff.

They really are quite impervious to taking advice, at least as soon as that implies any hint of criticism.

This also explains why Hillary’s campaigns come off their moorings so easily. If you don’t listen to staff in time or have staff who never criticize you, you are bound to wait on any course corrections until the underlying problems have truly festered.

A Republican, not a progressive

The efforts of the entire (older) party establishment notwithstanding, young people have a clear sense that the two Clintons effectively hijacked the Democratic Party. They turned it into a de facto old-style Republican Party à la George H.W. Bush.

Such a party is not liberal by any means – and it is certainly not progressive, no matter how badly (and poorly) she tries to usurp the “progressive” label.

Young voters were not around in the early 1990s, but they are politically attuned. They certainly realize that the Clintons’ method of rise to fame was that they sold themselves explicitly as “moderates” and “centrists.”

And if Hillary Clinton really told us about her upbringing, she would explain that she grew up in a very Republican household, of the 1950s establishment type.

All in all, young voters have a sense that, if she got nominated as the Democratic Party candidate for the presidency, a de facto Republican would enter the White House — whether called Clinton, Trump or otherwise.

What twists their stomachs into knots is that, given Jeb Bush’s weak performance, the Republican Party is on the verge of ending dynastic politics in its own ranks.

It is very unappealing to young people who are to the left of Republicans for the Democratic Party to become the standard bearer of dynastic politics.

No real friend of African Americans

Even though Clinton ain’t telling them, but young voters – thanks to the benefits of comprehending all aspects of public policy quickly through social media information flows – recall who was behind higher sentencing guidelines, which mostly impacted minorities.

The fingerprints of Bill Clinton and his administration – including Hillary Clinton’s legislative whipping efforts – are all over this.

Sanders won’t have to go “negative” on this sad fact of American political life in order to attract the African-American vote. As with women, there is an intergenerational conflict inside that community.

While the retiring leaders are almost all Clinton stalwarts, the younger ones are much more open to having buyer’s remorse on those early commitments obtained without much in return.

What the Clintons are selling is a kind of reflexive identity politics: “You must be for Hillary because we’ve been around. This is her turn.”

The fact of the matter is that much of what the Clintons have been selling – such as dismantling Glass Steagall, which was Bill Clinton’s signature effort to ingratiate “his” Democratic Party with Wall Street (and provide access to the coffers of financial support that go along with that) – has not helped the middle class.

Neither have their (and Obama’s) mindless policies of pushing people into expensive colleges (and mountains of student debt) in lieu of championing free public universities as in other countries.

Or their efforts to sell something as health care “reform” that barely moved the needle on the exploding costs of health care and pushed millions more into the arms of their friends in the private insurance sector.

Thus, while the Clintons try to argue that Hillary deserves anointment as the Democrats’ presidential candidate, many voters feel they have seen enough. They are no longer willing to buy the Clinton shtick.

Whatever the odds of Sanders in the general election, they feel they have much more in common with a self-described Democratic Socialist than with the Clintons.

It does help Sanders’ cause as a man “of the people, by the people and for the people” that his net worth (in the $400,000 range) is well below the combined fees that Mrs. Clinton commanded just for the one series of speeches she gave to the Goldman crowd.

The Clintons are also understandably livid with anger about the fact that Bernie Sanders has them in a headlock.

Even though he never says it, everybody knows that his trademark reference to the 1% is what separates both Clintons (and many of their top-drawer supporters) from the American people.

Not just inauthentic, but disingenuous

That is why people feel that Hillary in not just inauthentic, but disingenuous. She had plenty of opportunity to stand up to the moneyed interests, but she didn’t.

She was only keen on raking in her share. That’s what fairness is to the Clintons – making sure it’s not just Republicans who enrich themselves on the business of politics.

What they leave entirely unaddressed is that the method of their rise – and the cause of their chokehold over the Democratic Party – is that they turned the entire enterprise into a money machine, values and morals be darned.

A final note regarding Hillary sounding like an old car saleswoman: Recall her often-made references to the “golden” years under her husband, regarding economic growth and job creation?

What she is essentially arguing is that economic performance can be had by voting for the right family “clan.” But such profoundly Middle Eastern mechanisms of fealty do not work in an enlightened 21st century democracy like the United States.

Moreover, it is easily understood as what it really is: a transparent and illogical effort to double down on the gender argument. Vote for Hillary because she is a woman — and because she is Bill’s wife, and you remember him fondly.

(Note that there is a nice self-contradiction in those two “sales” arguments, particularly when she evades culpability for his policy negatives by asserting she is separate and that tying them together is sexist.)

In the end, the American people – for now, at least many voters in the Democratic Party primaries – have wised up.

They are doing for themselves what the Clintons have always been famous for – looking after their own material interests.

And they realize that Hillary is trying to sell them a clunker. A stunning number of people ain’t buying.