I won't vote for Bernie Sanders: His feeble position on Israel is a serious progressive problem

Bernie has run a smart campaign and I admire his economic platform. But his foreign policy lacks moral vision 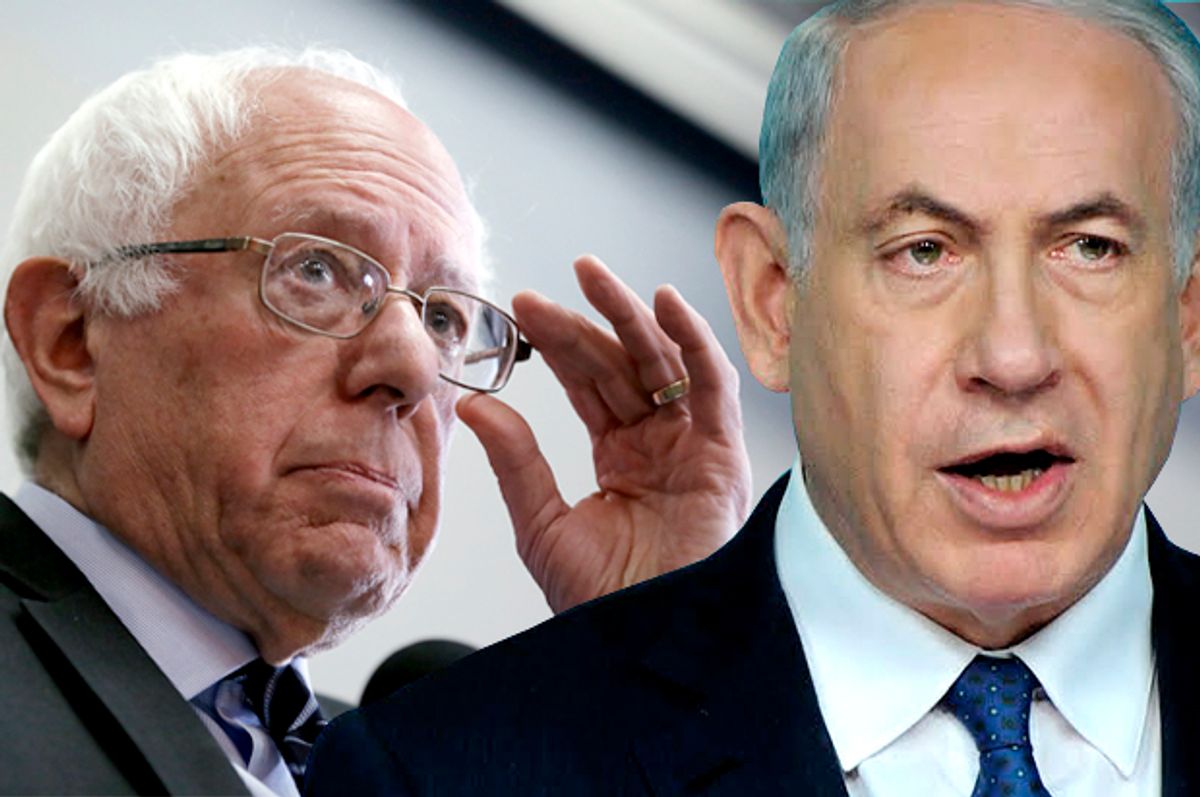 Bernie Sanders has run a smart and spirited campaign. Even if he eventually loses the Democratic primary, his rise from virtually nowhere to threaten Hillary Clinton from the left offers much-needed optimism in a time of dismal inequality. His invective against Wall Street is accurate and often courageous. He is the rare candidate who doesn’t traffic in patriotic or religious platitudes.

But I won’t be voting for him.

Sanders has long supported Israeli colonization, including the worst elements of its military occupation. I’ve had numerous arguments with friends about the extent and character of that support. Is it fair to call Sanders an adamant Zionist? Is he a Zionist at all? Does it even matter? How bad is he, really, in the spectrum of U.S. politics, where kowtowing to Israel has long been a prerequisite for the presidency?

We learn useful things about Sanders’s positions on Israel in relation to his competition, but comparison is unnecessary. Sanders periodically comments on Israel-Palestine. Here’s what we know: He’s not a raging ideologue. He doesn’t extol Israel. He hasn’t kissed Netanyahu’s ring. He recently declined to call himself a Zionist. Last year, though, he yelled at pro-Palestine activists and his platform on Israel-Palestine sounds agreeable but reproduces a failed status quo.

Sanders also has a record of funding or rationalizing terrible violence. We shouldn’t whisk away that record. It’s a material example of Sanders’s performance as a senator and has direct consequences on the lives of millions in the Middle East.

Supporters of Sanders say he’s not that bad, certainly not as bad as most contemporaries. This statement has no universal veracity. Sanders may not be bad according to a particular standard, but one cannot proffer this claim without subsuming Palestinians to an arbitrary pragmatism. Comments like “he’s not that bad” or “he’s better than most” are value judgments that shouldn’t be divorced from dynamic contexts of power and perspective. Those value judgments shift according to conviction, point of view, and geography.

Consider those who suffer the brutality of the Israeli military occupation Sanders has funded. In what way would they make sense of the notion that Sanders is worthy of support because he’s better than other politicians who fund their suffering?

When we’re asked to be pragmatic, the first question should be, “Pragmatic according to whose interests?” The second question should be, “Who determines the conditions of pragmatism?” Just because sucking up to Israel is a compulsion for politicians doesn’t mean it should be compulsory for voters. To say that we must accept a presidential candidate’s adulation of Israel for pragmatic reasons is to reinforce the normative power of Zionism. And to dismiss Sanders’s record on Israel as unimportant is to devalue Palestinian life.

Supporting Israel—by which I mean an unwillingness to criticize its ethnocratic structure—often sounds abstract. We do well to remember that human beings experience tremendous harm because of American economic and military aid to Israel. Thousands remain hungry and homeless in the Gaza Strip. Millions endure the daily indignities of life as occupied subjects. Refugees cannot return to their ancestral land. Children sustain psychological trauma. It is, in all, an ugly situation made worse by the cowardice of American politicians.

Even if we limit ourselves to Israel inside its 1948 boundaries, we find severe traditions of housing discrimination, school segregation, institutional racism, police brutality, violence against migrants, economic inequality and political suppression. Sanders purports to care about these issues. It’s easy to dismiss them as problems of a foreign country, but Israeli repression affects life in the United States. Dozens of American police departments receive training in Israel. The NYPD even has a branch in Kfar Saba, northeast of Tel Aviv, where it coordinates counterterrorism efforts that rely on invasions of privacy and racial profiling. Israel’s supporters in the U.S. are currently assaulting First Amendment protections by punishing critics of Zionism and attempting to outlaw the successful Boycott, Divestment, and Sanctions [BDS] movement in several states.

I’m not a single-issue fundamentalist, but I wouldn’t conceptualize Israel as singular. It implicitly and explicitly informs such matters of grave concern as neoliberalism, the arms industry, nuclear proliferation, dictatorial regimes and the influence of donor money on elections. Sanders cannot be held responsible for these problems, but stronger criticism of Israel would certainly ameliorate rather than facilitate them.

This isn’t about Sanders, per se, though nobody who funds or justifies colonization should be reduced to symbolism. It’s about an American tradition of subsuming the wretched to the practical needs of a corrupt electoral system. We have to consider ways to undermine notions of pragmatism that pretend to be innocuous and neutral while stifling the aspirations of multiple communities at home and abroad. Sanders has done important work, but his foreign policy platform, as exemplified by his feeble position on Israel, gets in the way of his domestic program.

Supporting Israeli ethnic cleansing is more than a flaw or an oversight. Until Sanders states an intention to defund Israel’s occupation, his proclamations about two states will continue to sound perfunctory and disingenuous, dull bromides uttered by a man who otherwise avoids them. And Palestinians will continue to exist as dispensable abstractions in American election drama.

Being better than Hillary Clinton or Ted Cruz isn’t a cogent benchmark; it illuminates the insanely low standards of a dreadful political system. Sanders doesn’t need to merely be better than his competition; he needs to be better than the lapses that impede his own political vision.