The GOP just despises science: No, really -- why would Trump, Rubio and Cruz rather live in a sizzling hellscape than face reality?

Don't take our word for it. You might listen to the world's most distinguished scientists and intellectuals, though 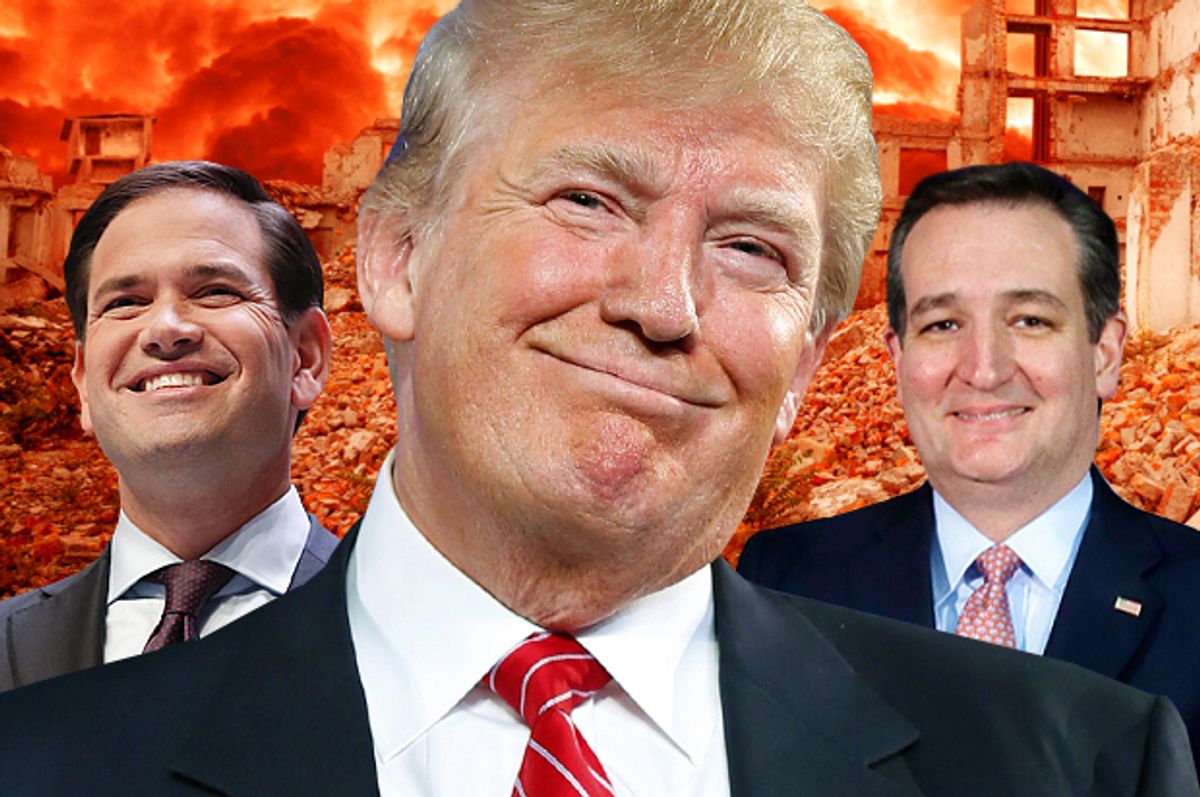 The Republicans are pushing human civilization toward a global catastrophe.

This is the unavoidable conclusion of a recent announcement made by the Bulletin of Atomic Scientists’ Science and Security Board, which consists of 12 highly distinguished scientists and intellectuals. For those who may be unfamiliar, the Bulletin is an organization that was founded in 1945, after the U.S. dropped two atomic bombs on the unsuspecting folks of the Japanese archipelago.

A group of scientists who had worked on the Manhattan Project — the “big science” project that produced the very first nuclear weapons — were horrified by the vast devastation caused by the devices that they had helped to create, and thus felt that they “could not remain aloof to the consequences of their work.” As part of their effort to inform the public about the dangers of nuclear weapons, they created the Doomsday Clock in 1947, which metaphorically represents our collective nearness to global annihilation, where the minute hand indicates the probability of a disaster.

Over the years, the minute hand has been pushed forward to a mere two minutes before midnight (or doom) in 1953, and pulled back to 17 minutes once the Cold War ended. In 2015, the Bulletin decided to move the minute hand closer to doom, from five to an ominous three minutes before annihilation. According to the Bulletin’s Science and Security Board, the two greatest threats facing humanity today arise from nuclear weapons and climate change. As Obama correctly noted in a 2009 speech, even a single nuclear weapon being detonated anywhere in the world “would badly destabilize our security, our economies, and our very way of life.” At the extreme, an exchange between two nuclear nations like India and Pakistan (which have a long history of conflict) could lead to an extended cooling period called a “nuclear winter,” and this could bring about global agricultural failures, starvation, disease and even the extinction of our species, Homo sapiens (which ironically means “wise man”).

As for climate change, the best current science warns that its consequences will be “severe,” “pervasive” and “irreversible.” At the extreme, a runaway greenhouse effect could turn Earth into a sizzling hellscape like our planetary neighbor, Venus, which succumbed to a greenhouse effect driven by water vapor rather than carbon dioxide. While this scenario is improbable on Earth (as far as we know), climatologists confirm that we can expect more extreme weather events, megadroughts, melting glaciers, sea level rise, desertification, food supply disruptions, the spread of infectious disease, ecological collapse, mass migrations, social upheaval and political instability in the coming decades. Some scientific studies have even predicted “longer and more intense allergy seasons” and a 50 percent increase in lightning strikes by the end of the century.

Making matters worse, the threats of nuclear war and climate change could synergistically interact with each other such that one nontrivially increases the probability of the other. Climate change, for example, will almost certainly have “conflict multiplying” repercussions that will both exacerbate existing struggles in the world and foment brand-new geopolitical tensions between state and nonstate actors. This could make a nuclear war or an act of nuclear terrorism appreciably more probable, just as slippery roads can increase the overall likelihood of car accidents taking place.

In fact, a recent study published in the "Proceedings of the National Academy of Sciences" argues that one can draw a fairly straight line of causation from climate change to the outbreak of the Syrian civil war, due to a record-breaking 2007-2010 drought in Syria that resulted in “widespread crop failure and a mass migration of farming families to urban centers.” And the Syrian civil war is what enabled the Islamic State to consolidate its forces and eventually emerge as the largest and most powerful terrorist organization in human history. So we already have at least one instance of climate change multiplying the number of conflicts in the world. Just imagine what the situation will be like in 50 years, when the severe and pervasive consequences listed above are in full force.

Given the significance and urgency of these two gigantic threats, any effort to limit greenhouse emissions and deter the proliferation of nuclear weapons would be a positive step toward enhanced global security. This is why the Bulletin’s announcement repeatedly praises the Iran nuclear deal and the Paris climate agreement as “real diplomatic achievements that required genuine political leadership.” The former effectively prevents Iran from building a nuclear weapon in exchange for lifting economic sanctions, while the latter, which involved nearly 200 nations, aims to limit the rise in Earth’s surface temperature to 1.5 degrees Celsius relative to pre-industrial levels. While the Bulletin cautions that these are “far from sufficient to address the daunting array of major threats the world faces,” it’s nonetheless clear that they constitute “small bright spots in a darker world situation full of potential for catastrophe.”

What I’d like to draw our attention to is the fact that both “bright spots” were tenaciously opposed at every turn by the war-mongering, science-averse, anti-intellectual ideologues on the political right. For example, while the Obama administration was trying to forge a diplomatic solution to the international threat posed by Iranian nuclear ambitions, 47 Senate Republicans sent a defiant “open letter to the leaders of the Islamic Republic of Iran” stating that they would regard such a deal “as nothing more than an executive agreement between President Obama and Ayatollah Khamenei.” The letter then emphasizes that “the next president could revoke such an executive agreement with the stroke of a pen and future Congresses could modify the terms of the agreement at any time.”

Later, in September 2015, GOPers in the Senate attempted to register “formal disapproval” of the Iran deal through a procedural vote. This would have stopped the deal “in its tracks,” but fortunately the “vote fell two short the 60 needed to break a democratic filibuster.” To sum up the Republican view of this peaceful agreement, allow me to quote Donald Trump during a Republican debate: “We talk about Iran, and that’s one of the worst deals ever made. One of the worst contracts ever signed, ever, in anything, and it’s a disgrace.” Well said and eloquent as always.

Turning now to the ongoing, slow-motion catastrophe of global warming, the deplorable reality is that the Republicans have not only obstructed every effort to solve this existential problem, but they’ve often vociferously denied that it’s even real. Back in 2009, for example, the Republican congressman John Shimkus famously dismissed climate change during a House Subcommittee on Energy and Environment hearing by citing God’s promise to Noah that “never again shall there be a flood to destroy the earth” (Genesis 9:11). (Note: For any “accommodationists” out there who believe that science and religion are compatible, let this be Exhibit A.)

And last year — the hottest ever on record — the chairman of the Environment and Public Works Committee, Jim Inhofe, brought a snowball onto the Senate floor to cleverly “refute” climate change. After noting that “It’s very, very cold out. Very unseasonal. Mr. President, catch this,” he then tossed it to a fellow Republican. Indeed, to quote the Bulletin’s announcement itself, “The elections of more climate-friendly governments in Canada and Australia are … encouraging, but must be seen against … the continued intransigence of the Republican Party in the United States, which stands alone in the world in failing to acknowledge even that human-caused climate change is a problem” (italics added).

The contrast between what the venerable intellectuals on the Science and Security Board see as instances of progress in an increasingly perilous milieu and the ideological dogmas of anti-science, pro-war Republicans is quite striking. Given the facts about climate change and the appalling history of U.S. intervention in the Middle East since 2003 (not to mention the past century), it’s not misleading to assert that Republican policies are inching us ever closer to the eternal grave of extinction. A Republican in the Oval Office next year could be genuinely catastrophic, not just for the American empire, but for humanity as a whole.

While apocalyptic rhetoric like this is commonly employed in political discourse by demagogues to reinforce a false sense of moral superiority and eschatological urgency, not all apocalyptic accusations are unfounded hyperbole. As I’ve written elsewhere, the difference between being alarmed and being an alarmist comes down to the “epistemological” issue of whether one’s fears are proportioned to the best available evidence, considered as a whole. And when one does this in an intellectually honest manner, it becomes clear that our situation really is dire, as the Bulletin claims, and those on the political right really are making the situation worse.

Put differently, just as progressives have been on the “right side of history” with respect to a wide variety of issues, including civil rights, gender equality, animal rights, the Iraq War, torture, and gay marriage, when it comes to the uniquely global and potentially existential threats that haunt our collective future, we’re also very much on what I’d call the “right side of futurology.” It’s not inaccurate to say that the present era is unlike any other in human history, given the scope and severity of the risks facing us. And as the Bulletin points out, there’s a swarm of emerging risks that loom hauntingly on the threat horizon before us. To survive this increasingly dire “world situation,” those of us on the “right side of futurology” must continue to listen to the evidence-based warnings and policy proposals of organizations like the Bulletin, and to support political leaders who actually care about the future of our planetary spaceship beyond the next election cycle. The Doomsday Clock is ticking, and if the Bulletin is to be believed, we have only three minutes left.