Don't drink the water: Flint is just the latest in a long line of disposable communities. It's time to act 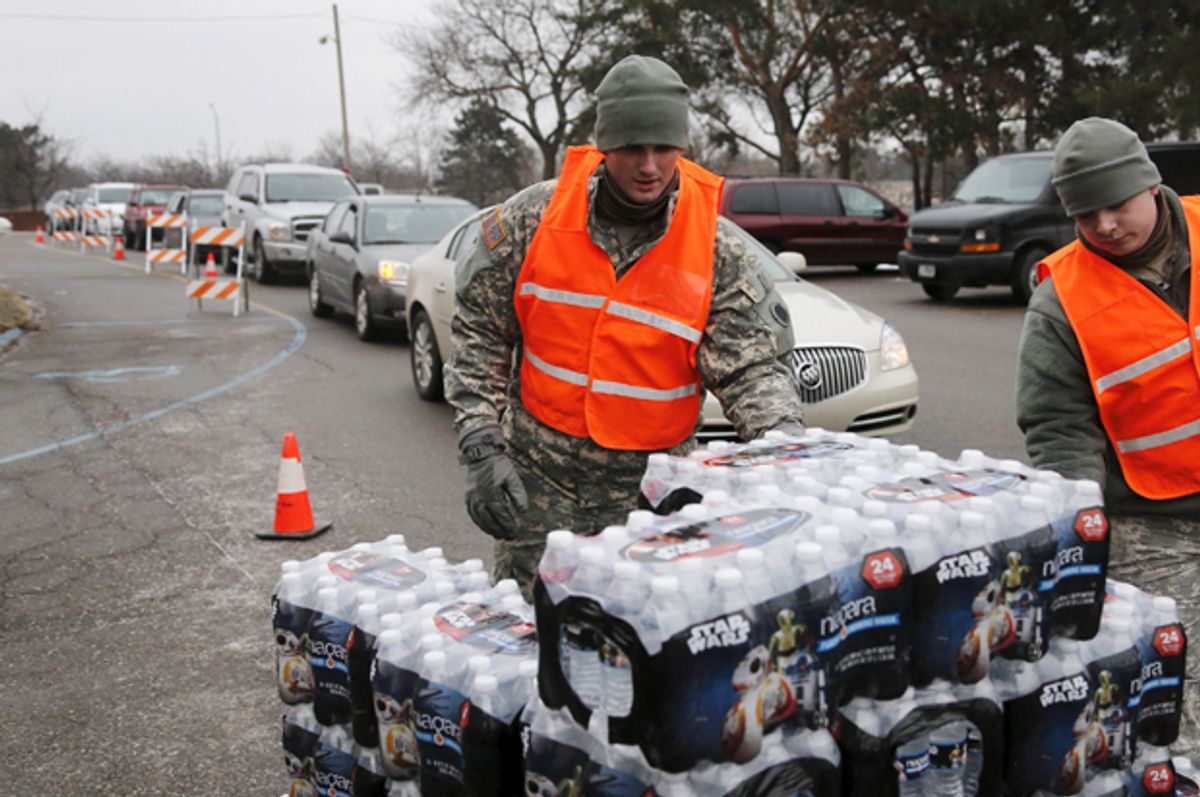 The tragic water crisis in Flint, Michigan, has shown how hazardous and unjust water pollution can be. People in Flint are right to protest the callous disregard for their health. Many across the U.S. are wondering if their own water is safe. In this moment when more people are paying attention to these issues, we should be advocating one of the most effective ways we could simultaneously protect America’s drinking water and make our society fairer: giving up fossil fuels.

To explain why fossil fuels are both a health issue and a justice issue, let’s start with coal. Whole communities have been destroyed in Appalachia, where they literally blow up mountaintops to extract hard-to-reach coal. The process, called mountaintop removal, poisons area streams, causing high rates of cancer and birth defects among the people who live nearby. Once extracted, the coal is “washed” with chemicals that, it turns out, have been leaking into local rivers, a problem that hit the news in January 2014 when approximately 10,000 gallons of these chemicals spilled into West Virginia’s Elk River. People showed up to local emergency rooms with vomiting, nausea and rashes before 300,000 area residents were warned not to drink the water.

It’s not just coal’s production process that endangers our water. After it is burnt, the leftover coal ash gets dumped in places like Eden, North Carolina, which has a per capita annual income of $17,517. Eden had its own fleeting moment of media attention in February 2014, when a pipe broke under a Duke Energy waste pond, spilling 39,000 tons of coal ash waste into the Dan River, which winds back and forth across the North Carolina-Virginia border. The spill released more than 70 Olympic swimming pools worth of coal ash sludge, containing such toxic heavy metals as arsenic, selenium, chromium and mercury.

There are many, many more examples of water being poisoned as a result of fossil fuels, whether in the production, transportation or disposal of the waste. There have been devastating oil spills in the Gulf of Mexico and the Kalamazoo River. There’s water so polluted it’s flammable in Pennsylvania, where natural gas is extracted through hydraulic fracturing, a process that injects chemical-laden water deep into the earth. Afterward the toxic brew has to be disposed of somewhere. A new study of fracking waste water wells in south Texas shows that they are most likely to be in communities of color, most frequently Hispanic.

What runs through all these stories—including Flint—is the fact that the communities with the least political power are most likely to be deemed disposable by ruling elites. In Texas that’s Hispanics. In North Carolina, coal ash is dumped most often near African-American, Native American or Latino communities. Racism clearly makes it easier for politicians and corporations to dismiss these people’s concerns, though as some have pointed out in Flint, class plays a role, too. Appalachians are predominantly white, but they are also predominantly working-class and a group that has been viciously stereotyped, making it easier for people to overlook the horrendous health effects of mountaintop removal.

The other thing that runs through these stories is the corrosive role of political power. In the aftermath of the North Carolina coal ash spill, media reports focused on who was to blame, just as in Flint. Turns out Duke Energy officials knew there were risks but didn’t act. Turns out the governor worked for Duke Energy for 28 years, owned its stock, and accepted its campaign contributions, which might be why the state gave Duke a proverbial slap on the wrist. In West Virginia, coal companies have historically dominated politics, one of the reasons many residents didn’t trust their politicians when they said the water was safe to drink again after the Elk River spill.

Here’s the bigger lesson: We can investigate local politicians and work to hold them accountable—and we should—but as long as fossil fuel companies hold more power than local communities, people’s health and safety will always be at risk. We can fight each case of environmental racism and classism—and we should—but as long as we choose energy sources with high health risks, some communities are always going to end up bearing an unfair cost. This doesn’t mean the rest of us are safe, by the way, just shielded a bit until a spill happens upstream from us. It’s worth noting that the sickening chemicals that went into the Elk River near Charleston, West Virginia, were later found in the water as far downstream as Kentucky.

The good news is that there are alternatives that would be good for everyone—except the fossil fuel industry. Solar technology has greatly advanced and come down in price. Improvements in wind turbines are making them more efficient and less dangerous for birds, and both these industries create good jobs. Such renewable energy sources would be better for air pollution and climate change, too. In fact, if we have any hope of addressing climate change before scientists say it is too late, we have to shift off of the same fossil fuels that are poisoning so many communities. In many cases, it’s the people on the front lines—those whose communities are being poisoned right now—who are also leading the climate movement.

The people of Flint will have to deal with the health effects of this crisis for decades, if not longer, but the media will inevitably move on. So, while people across the country are still thinking about it, let’s use this moment of increased concern about water to argue for energy sources that are much safer across the board. As they say, when there is a big solar spill, it’s just called a nice day.