Is Bernie Sanders doomed to the same fate as Ron Paul?

The two candidates share some electoral similarities. But there are reasons to feel better about Bernie 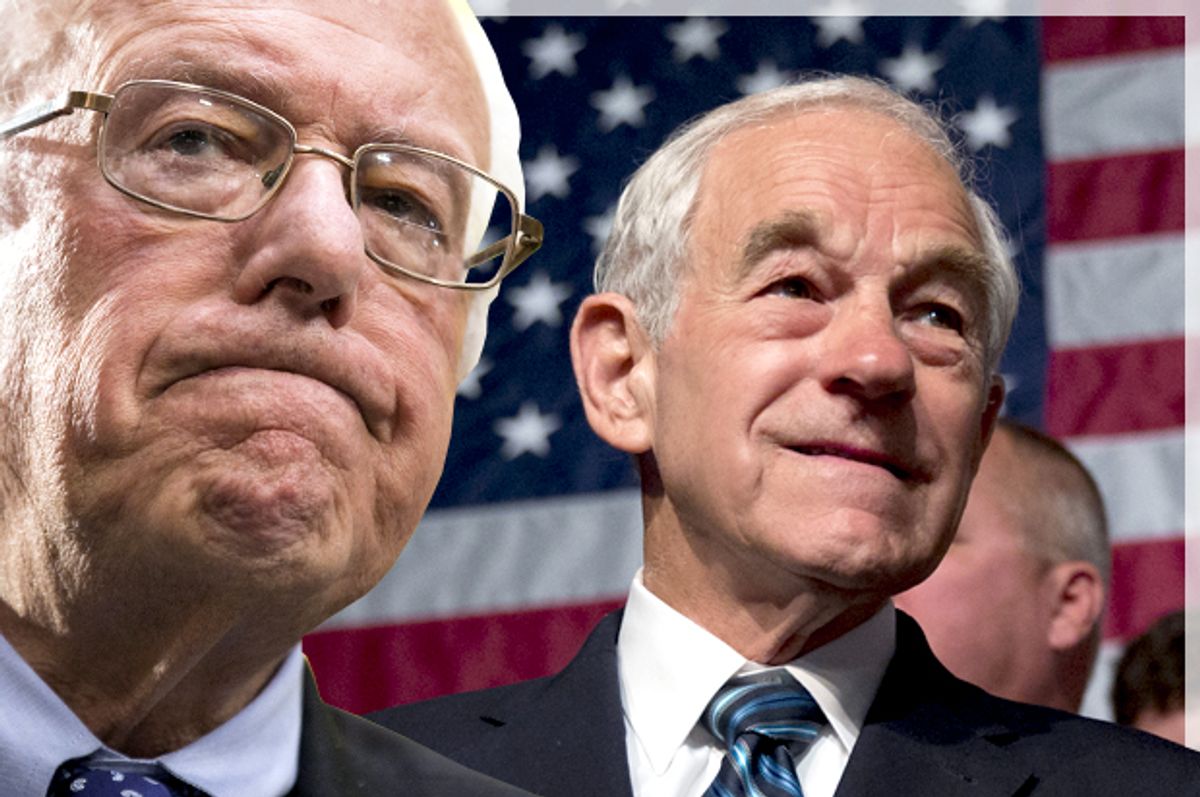 It is sometimes surprising to see how fast the political conversation can change in the United States. Whether it is the rapid shift in opinion we have seen over the past decade on issues like gay marriage and marijuana legalization or the neoliberal revolution that Ronald Reagan ushered in in the ’80s, change can come swiftly and unexpectedly. But the deviation we have seen over the past year in both the Republican and Democratic parties, thanks largely to their respective presidential primaries, has been unusually rapid.

Last week, for instance, the Daily Beast published an article that would have seemed downright absurd not too long ago, attempting to make a “libertarian case for Senator Bernie Sanders.” That’s right, a libertarian case for a democratic socialist who has been railing against the excesses of free-market capitalism -- a fundamental tenet of libertarianism -- since the summer. It just goes to show how fast a political movement can go from “the future” to the "never was."

Less than a year ago, Sen. Rand Paul, R-Vt., who is as libertarian as a mainstream politician gets, entered the GOP presidential race to much fanfare. He was considered by many to be the future of the Republican party, similar to his popular dad, Ron Paul, though less ideologically stubborn and more presentable to the American public. He was also much more liberal on social issues than your average Republican; nor was he a warmonger -- unlike your average Republican.

Of course, Rand Paul’s campaign never took off, and he dropped out of the Republican primary earlier this month to focus on his Senate reelection. Looking back today, it’s hard to believe commentators thought that the Republican Party was a party for libertarians.

Paul’s achilles' heel was his consistency. Unlike every other Republican, he was consistently for small government. For example, he criticized social welfare programs and the military-industrial complex and called for the deregulation of the economy and the demilitarization of police forces. What other GOP candidate would dare criticize American militarism and police?

After Paul’s failure, it should be clear that most Republican voters are not really “live free or die” libertarians. While they may not like when the government is providing impoverished people of color with healthcare or funding Bill Moyers and Big Bird, when it comes to spending trillions of dollars on perpetual war or providing them with Medicare, they are fully supportive. (Tea Partiers protesting socialized medicine while telling the government to “keep its damn hands off my Medicare” reveals this contradiction as well as anything.)

Now, with Paul out of the race and the nativist Donald Trump still leading the pack, the GOP is looking more and more like the anti-liberty party. As Ron Paul said of the billionaire back in October: “Trump is an authoritarian and he brags about it.” Which brings us back to Sanders. Andrew Kirell writes in The Daily Beast:

“While Sanders’s economic policies deeply conflict with libertarians—single-payer health care, government-funded college tuition for all, etc.—he is their only remaining ally on a slew of other big issues.”

Indeed, Sanders is the only mainstream candidate who is not a military hawk, and he is undoubtedly the best on civil liberties, whether it is criminal justice reform, the rescheduling of marijuana, or protecting the privacy of Americans. (He voted against the Patriot Act, for example.)

Of course, for many libertarians, Sanders’ redistributive economic policies are probably a deal-breaker. But as Kirell writes, “the fact that libertarians would even entertain the idea of voting for an avowed “socialist” like Bernie Sanders shows just how disaffected the movement has become.”

The collapse of the libertarian movement does raise an important question for those of us on the left: Is Sanders’ democratic socialism really the future of the Democratic party, as some have recently concluded? Or is Sanders simply a Ron Paul of the left, whose supporters will disband after his campaign?

A crucial difference, I would say, is that Sanders’ policies could actually become a reality in a democratic society and have a universal appeal, while Rand Paul’s laissez faire policies are, as I pointed out above, unlikely to ever gain widespread support from the public (unless the Koch brothers manage to successfully indoctrinate America's youth). Even the Tea Party protesters who claim to hate big government only hate parts of big government, and would be unlikely to support a libertarian trying to slash the defense budget or kill Medicare. Sanders is proposing social democratic policies that are already in existence -- and very popular -- in many other developed nations. And according to public polling data, a majority of Americans already agree with much of Sanders’ platform.