Republican debate insanity: An ugly fight that saw the GOP succumb to Trumpism 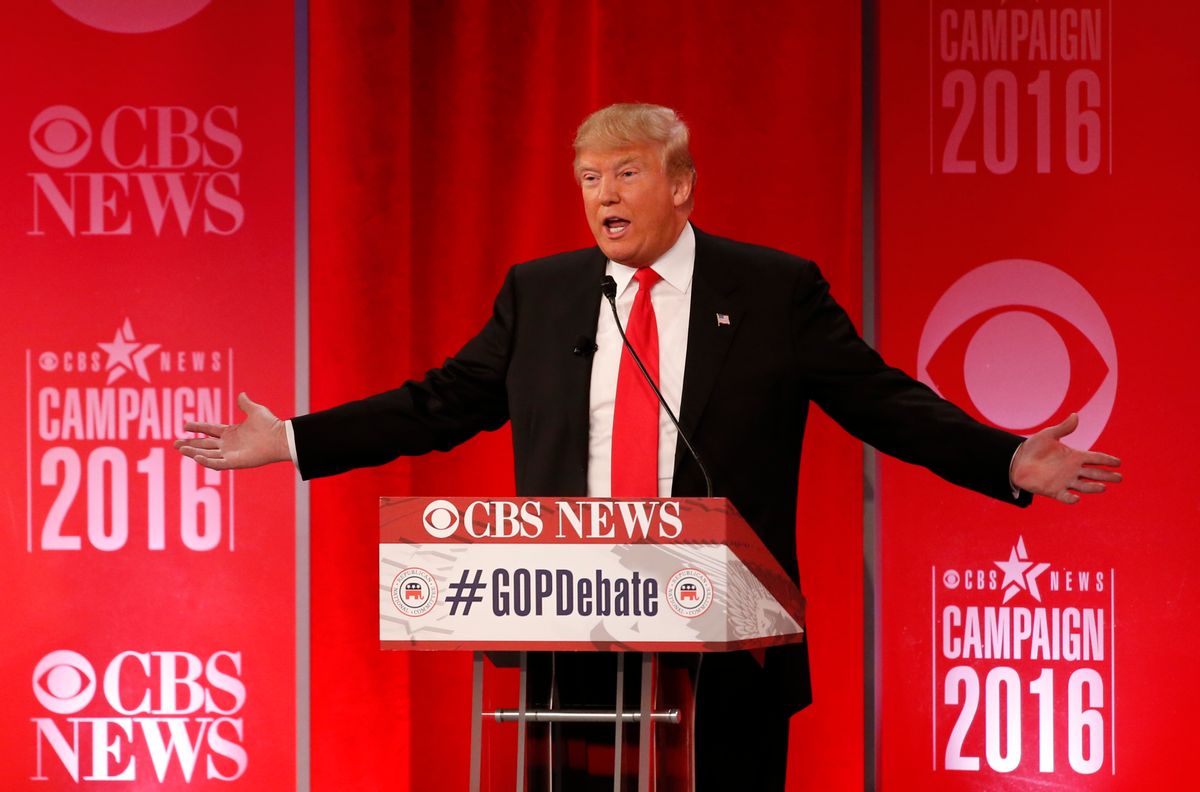 The ninth Republican presidential debate is in the books, and it kicked off amid what is undoubtedly the most significant political development of the 2016 cycle: the death of Supreme Court Justice Antonin Scalia. A long-serving and hardline conservative justice, Scalia’s death has deprived conservatives of their majority on the court, and the fact that a Democratic president can nominate his replacement is obviously of great concern to the GOP. And so, not surprisingly, the first set questions at the debate focused on Scalia, Barack Obama, and the looming political fight over the Supreme Court.

Nearly every Republican candidate for the presidency, when asked if the sitting president should nominate a successor to Scalia, insisted that it should not happen. Donald Trump said that Obama will almost certainly nominate someone but that the Senate GOP should “delay, delay, delay.” John Kasich argued that Obama should hold off because his pick will likely be politically divisive. Ben Carson rambled a bit before saying “we’re not going to get healing with President Obama.” Marco Rubio said Obama should not appoint someone because “it has been over 80 years since a lame duck president has appointed a Supreme Court justice.” Jeb Bush said it’s Obama’s right to make a nomination but he probably won’t make a “consensus” pick. And Ted Cruz followed Rubio’s lead by arguing “we have 80 years of precedent of not confirming Supreme Court justices in an election year.”

Thus you had several people running for the office of the president arguing that the president’s rights and privileges under the Constitution should be subordinated to political considerations. And as moderator John Dickerson observed, the “80 year” precedent cited by Rubio and Cruz is, at best, misleading, given that Anthony Kennedy was nominated in 1987 and confirmed in 1988, the final year of Ronald Reagan’s second term. Elections have consequences, the saying goes, but the candidates on stage rewrote it on the fly to argue that an election that hasn’t happened yet matters more than the one that sent Barack Obama back to the White House for a second term. Generally speaking, it’s a bad look for a would-be president to argue that the president shouldn’t get to do president stuff.

From there the debate spiraled downward into a nasty, multi-candidate knife fight with Donald Trump at the center. Saturday night saw Trump put the theory of Trumpism to what has probably been its biggest test yet. He got into a phenomenally ugly fight with Jeb Bush that saw him uncork a long, angry diatribe against the Bush family, the Iraq war, and George W. Bush’s record on terrorism. He made the (accurate) observation that 9/11 happened on Jeb’s brother’s watch, and he said (accurately) that the Iraq war was a mistake that was sold to the country with lies. For that, he was rewarded with boos from the audience and nonsense ripostes from candidates like Marco Rubio, who “thank[s] God all the time it was George W. Bush in the White House on 9/11” because “you can look back in hindsight and say a couple of things, but he kept us safe.”

If the theory of Trumpism is that he succeeds because he promises to – if I may paraphrase Greg Sargent – break the political system over his knee, then a frontal assault on the Bush family makes at least some sense. Trump is the favorite of moderate and “liberal” Republicans who are probably less likely to view Bush or the Iraq war through as clouded an ideological lens as, say, Sean Hannity. And it does fit in with his broader message the everyone’s been getting screwed by Washington for years, regardless of who’s been in the White House. The immediate problem for Trump is that South Carolina isn’t the same ideological beast as New Hampshire. It’s a lot more conservative and a lot more apt to view the most recent Bush presidency with sympathy rather than anger.

There were other nasty exchanges in abundance, but the most interesting was the latest immigration flare-up between Ted Cruz and Marco Rubio. The contours of that fight are very well-worn at this point – Cruz attacks Rubio for passing the Gang of Eight immigration bill, Rubio attacks Cruz for flip-flopping on “amnesty” – but this latest exchange got personal. Cruz attacked Rubio for going on Univision and saying in Spanish that he wouldn’t immediately rescind Obama’s executive orders on immigration. Rubio replied: “I don't know how he [Cruz] knows what I said on Univision because he doesn't speak Spanish.” Cruz, who, like Rubio, is of Cuban descent, shot back: “Si quieres – ahora mismo, dice lo ahora, en español, si quieres.” (It’s a bit rough, but it translates to: “If you want – right now, say it now, in Spanish, if you like.”)

That was an amazing moment. The two Latino candidates in the Republican field get into an argument over Spanish fluency in the context of proving which one of them is more anti-immigrant. That Republican reboot is really coming along swimmingly.

Much of the rest of the evening proceeded in that vein. As Josh Marshall notes, “Donald Trump finally succeeded in bringing the whole party down to his level.” And it wasn’t pretty, not by any stretch of the imagination.