Bernie's man behind the scenes: Tad Devine is the Karl Rove to Sanders’ 2016 populist uprising

Devine, who guided party-backed candidates against political upstarts in 2000 and 2004, is now on the other side 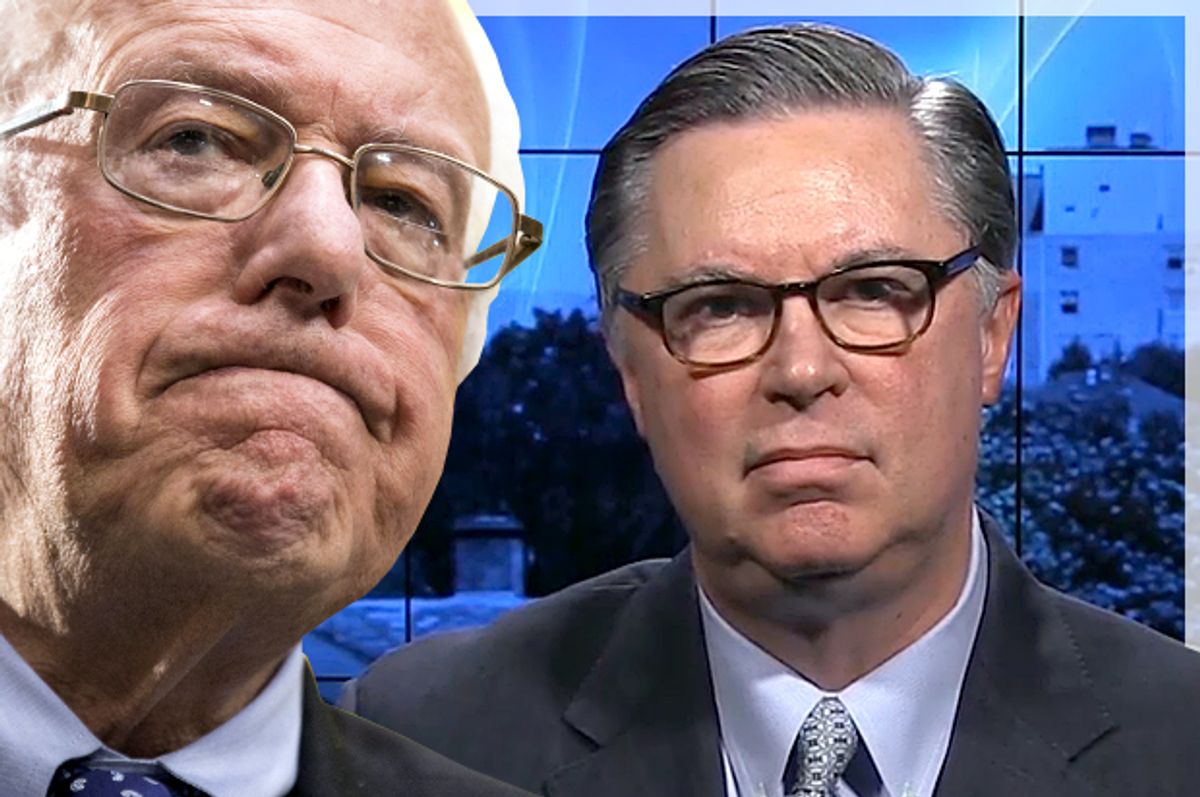 For members of the Democratic professional political class, 2016 presented two options: either sign on with the Cruise Ship Clinton, hoping to land a berth somewhere in the engine room; or stay on the sidelines entirely, stewing in green rooms, saving bon mots for the cable shows.

Except for one guy — Tad Devine, the Karl Rove to Bernie Sanders’ 2016 populist uprising.

How out of place is Devine in Bernie-land? Consider that his campaign chairman was lured back into politics from his perch as the proud owner of a comics book shop in Northern Virginia. His press secretary is a 25-year-old woman who was active in the Black Lives Matter movement before coming aboard. His top digital adviser comes over from the Wikimedia Foundation.

Devine though is as cosseted in the Beltway power establishment as a consultant comes. Pre-Barack Obama, he worked on every contested Democratic presidential primary going back to Jimmy Carter in 1980. He was the top delegate-counter for Walter Mondale and Michael Dukakis. He has worked on campaigns in Europe, Latin America and the Middle East, helping to elect 11 presidents or prime ministers and 17 U.S. Senators. He was a top adviser to both Al Gore’s doomed 2000 campaign and to John Kerry’s 2004 effort.

Devine, who spends part of the year on Block Island, is so Beltway that he says in an interview he first became aware of what a phenomenon the Sanders campaign had become when he saw someone passing out Sanders literature at his Logan Circle Sunday farmers market.

If this were a movie, Devine would have been the only DC power consultant to have signed on with the insurgent Bernie operation because after four decades in political life, he was tired of all the establishment class bullshit and followed his heart to Burlington.

Or maybe he nurses some longstanding grudge against the Clintons  and is determined that 2016 be the year he, at last, exacts his revenge by sending out a wild-eyed Socialist to put the scare in them.

To which Devine shrugs.

“This is me working for someone I have known for over 20 years,” he said in a series of phone interviews. “I’ve worked for a lot of people in this business. Bernie isn’t just a client of mine. He is a friend of mine.”

Devine first met Sanders in the 1990s when Congressman Peter DeFazio of Oregon suggested that the wild-haired congressman professionalize his political operation a bit. Devine was reluctant at first — his own political consulting firm was just getting off the ground, and he wasn’t sure how it would look to take on as a client someone who wouldn’t even join the Democratic Party. Sanders, from the other side of the Brooklyn and the University of Chicago, shared a similar upbringing with Devine, who grew up in a South Providence, R.I, housing project, the son of a sidewalk inspector, and ended up at Brown. The two became fast friends, with Devine making frequent trips to Vermont, particularly during Sanders hard-fought first campaign for the Senate.

And as much Sanders rails against the professional political class, campaign aides say he is willing to make an exception for Devine.

“He was on the ground floor from the get-go about a presidential race,” said Michael Briggs, the Sanders campaign spokesman. “He would talk about the potential that was out there for this kind of campaign. He would say he thought we were in a moment in history where our message about a rigged economic system resonates.”

In his previous presidential forays,  Devine was signed with the guy who the rest of the party rallied around. The ships he helped steer in 2000 and 2004 were massive operations, backed by all sorts of party insiders, institutional players, and the best pollsters, political operatives and message mavens money could buy.

This time around, it is just Devine.

And more to the point, in 2000 and 2004, Devine was working for the Hillary Clinton of the race – the well-funded party player who the pundits and the press thought was going to cruise to the nomination, only to find that they were running even with an annoying insurgent on their left flank — Bill Bradley in 2000, and Howard Dean in 2004.

This time around, it’s Devine tossing brickbats at the Democratic Party edifice. Listen closely, and it is not hard to hear some vintage Devine in the hits coming his way now.

Back in 1999, the Gore campaign was floundering in its race against Bill Bradley, the former New Jersey senator running against the Clinton White House. Gore didn’t know Devine, but some in his orbit recommended him and he advised the vice-president to eschew the Rose Garden and take the fight to Bradley. Soon enough, Gore was challenging Bradley, whose campaign was based largely around campaign finance concerns, to forego campaign ads in favor of a series of twice-a-week town hall debates. The campaign adopted the slogan, “Stay and Fight”—a reference to Bradley’s decision to leave the Senate in 1996. When Bradley proposed a universal health care plan, Gore accused him of abandoning Medicaid recipients, a charge that left Bradley so angry he could hardly speak, but one reminiscent of the way that the Clinton campaign is now accusing Sanders’ single-health care plan of reversing the gains of Obamacare.

In 2004, Kerry was 20 points behind Howard Dean in New Hampshire, and pundits were describing the anti-war Vermont governor’s nomination as looking inevitable. And so just like Gore, Kerry went on the attack, telling a New Hampshire audience at his campaign reboot, “Send them someone who offers answers, not just anger; solutions, not just slogans,” and adding, in what would become his campaign refrain, “Don't just send them a message. Send them a president.”

Compare with Clinton on Sanders earlier this month: “I am not interested in ideas that just sound good on paper” and dismissing Sanders’ proposals.

“A president has to deliver in reality,” she told an Iowa audience.

Devine wouldn’t reveal any response he has planned to counter the attacks he devised over a decade ago. He insists this race is different.

“The big problem that the Clinton people haven’t figured out yet is that it is very different times than it was in 2004 or 2000. The country for decades now is being pressured by an economic circumstance that means an enormous amount of wealth is being driven to the top almost exclusively. People understand this. They understand that there has been enormous gridlock in Washington, D.C. And there is the ongoing hangover of our security situation from these wars in the Middle East. If you take the politics of the 1990’s and try to impose them on an election in 2016, I think you are really going to come up dry with voters.”

Notice that? The little bit of an elbow tossed Team Clinton’s way for being locked in the past, a past which led to unnecessary wars and widening inequality. Among Democratic political consultants, Devine is known for two specialities—a soup to nuts understanding of the Democratic primary process of counting delegates, honed from his days with Mondale and Dukakis, and of a certain disembowelment of his political opponents.

Which in his current position is unfortunate for him, since Sanders publicly said he would not run negative ads against Clinton.

Longtime friends of Devine’s imagine him chomping at the bit from his D.C. office trying to goose the Burlington crowd into unsheath their shiv.

“Tad is — how should I put this — a believer in contrast politics,” said Steve Elmendorf, who worked with Devine on the Kerry campaign. “He thinks that elections are choices, and if you are going to win, you have to show what that choice is about.”

But still — why is one of the most famous names in Democratic politics working for someone whom even Devine admits was seen initially as the second coming of Dennis Kucinich?

“That says something about him. When he made that decision Bernie was a joke,” said Carter Eskew, a former top aide in the Gore campaign. “Why go work for somebody who isn’t seen as serious just to incur the wrath of Clinton, Inc? Why would you do that? I mean c’mon! Everybody in politics has a long memory, but I would say the Clintons is longer than most. It is a gutsy thing to do.”

But, Eskew adds, it wasn’t pure guts. “Tad likes action. That’s where the action is. The Clinton ship was done. It was a full crew.”

“Tad is a free spirit,” added Bob Shrum, a longtime partner of Devine’s. “I assume a lot of people would be afraid of offending the Clintons. Tad doesn’t live that way.”

Hanging around with the outsiders can take some getting used to. Devine said that when former Massachusetts Senator Paul Kirk wanted to endorse Sanders, he couldn’t find anyone with the campaign to contact so ended up just emailing the general mailbox of Devine’s firm. (A sharp-eyed assistant happened to catch it, and the campaign announced the first endorsement from one of Sanders’s former colleagues with great fanfare.

Devine says that he prefers the nimbleness of the Sanders operation to the overstuffed Clinton one.

“There are great advantages to having a lot of institutional support when you run for president, but there are also real liabilities. You have to assemble a gigantic campaign mechanism that makes it difficult to move quickly towards an issue or towards a scheduling decision,” he said. “In an institutional campaign, the message gets crafted through research. We have none that. Bernie went around the country delivering the speech he still delivers, and he entered this race because he recognized that it would resonate powerfully.

“We don’t have the cadre of people that you might find in Brooklyn, but listen, we understood that the Democratic institutional players decided that Hillary Clinton would be their nominee. We understood that Bernie wasn’t going to compete on that score, so we stop trying to make up ground there. We are going to make it straight to the voters, let them decide who the nominee should be, and then hope the institutional players come on later.”

You catch that? The poll-tested, slow-moving Clinton campaign against the take-it-to the people straight shooting Sanders one. That is the Devine money shot, if ever there was one.