It took 20 years to shoot down vagrancy laws. Then we got stop-and-frisk

The victory against vagrancy laws was a partial one, but it reminds us there's still hope for justice 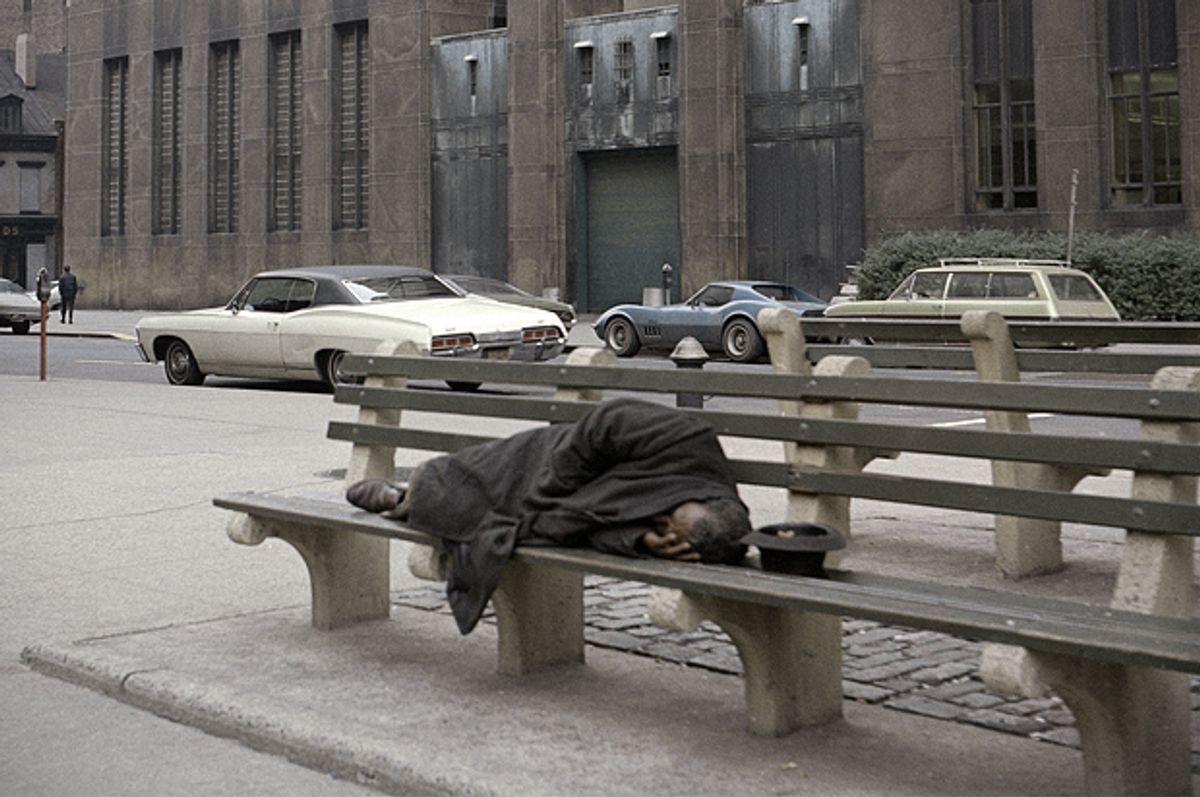 A homeless man sleeps on a bench outside the Manhattan House of Detention, also known as The Tombs, Oct. 31, 1970. (AP/Ed Ford)
--

As we debate police misconduct, and especially the rampant practice of stopping and frisking, we should remember that these debates are not new. We need to remember what police did before stop-and-frisk, for it gives us three important lessons for today: 1) we have long debated how and under what circumstances the police can exercise discretion; 2) though the police claim that for the most part they do what they do in order to fight crime, they are often also maintaining social controls that reflect majority social mores; and 3) change can happen, even if maintenance of the status quo sometimes looks inevitable.

Consider vagrancy laws. Before stop-and-frisk, such vague and broad laws gave the police authority not just to stop but to arrest, and then have convicted and punished, anyone who seemed suspicious, idle or immoral, or who wandered about with no apparent purpose. One long-standing justification for vagrancy laws was that they “prevented” crime. By arresting those who seemed likely to commit a crime, the police were effectively controlling crime.

To many, however, that was not really what the police were doing with vagrancy laws. They saw vagrancy laws playing a very different role: keeping social order. Indeed, though young minority men were a frequent target of vagrancy laws in the era of their heyday, so too were many others who seemed threatening to mainstream American society: Beats and hippies; Communists and Vietnam War protesters; racial minorities and civil rights activists; gay men and lesbians, single women, poor people and prostitutes. For centuries, vagrancy laws provided the police with a flexible, ubiquitous, hidden tool for justifying the arrest of anyone who seemed out of place in any way.

As many of the people who had been prime targets of vagrancy laws began to organize into social movements in the 1960s, they began to see the laws as obstacles to their freedom and equality in the 1960s. They joined organizations, found lawyers and brought constitutional challenges against vagrancy laws. As a result of both their challenges and the sweeping social and cultural changes of the time, vagrancy laws came to seem more and more obviously at odds with an American culture that had more space in it for difference.

Over the course of the 20-year vagrancy law challenge, law enforcement officers and local officials gradually gave up earlier arguments that the laws were necessary for both public safety and social order. They understood by the late 1960s that such arguments would no longer resonate with many Americans who had come to accept, if not always and universally embrace, that African-Americans should be treated equally; that long hair on men or pants on women were not always signs of likely drug use; that sexual freedom was not something that should be criminalized. As the police outwardly let go of such arguments, they relied more and more heavily on the crime control idea: Some form of police discretion and authority needed to survive the challenge so that the police could (continue to) perform their crime control functions adequately.

By 1972, the Supreme Court had struck down vagrancy laws as unconstitutional. Even as the Court took away police authority to arrest and convict people for being different in a way that seemed dangerous, it did not take away all police discretion. In fact, allowing the police to retain some discretion had been part of a kind of deal the justices made. They only invalidated vagrancy laws after they had authorized what seemed at the time a less harmful alternative that would allow the police to continue to prevent crime while not allowing them to suppress nonconformity.

That alternative was the stop-and-frisk. As it turned out, finding a balance between allowing the police to control crime and stopping them from discriminating was not as easy as the justices might have hoped. Almost a half-century later, young minority men continue to be police targets despite the fact that no evidence of illegality is found on the vast majority of those stopped. The history of vagrancy laws that preceded the stop-and-frisk thus reminds us that police discretion in the service of social control continues to be the order of the day.

The victory against vagrancy laws was thus a partial one. But it was a victory nonetheless. The invalidation of vagrancy laws represented a disruption in 400 years of criminalizing difference as dangerous. It made clear that nothing was now too small for constitutional consideration. It took away legal authority from the police and gave new constitutional protections to outsiders. And it required a new kind of transparency in police conduct. That very transparency is how we know so much today about the precise uses to which the police put their stops-and-frisks.

That every day seems to bring new revelations about those uses, as well as even more violent forms of police misconduct, is deeply disturbing. But the history of vagrancy’s downfall shows that change—even if partial—is possible. Such change requires individuals who reject the justice of harms done to them; social movements that articulate and organize around those harms; and lawyers who represent those affected in court. We are already in the midst of this next wave of change with protests against the killings of Michael Brown and Freddy Gray, the growth of the Black Lives Matter movement, and successful litigation like that against stop-and-frisk in New York City. Indeed, even law enforcement officers in the Department of Justice and elsewhere have acknowledged that change is necessary.

No doubt, just as the end of vagrancy laws did not fix the entire problem of police discretion, the steps now on the horizon will not be the last ones either. But as we make visible the distance between how the police behave and how many people think they should behave, it becomes possible to imagine, and to implement, more promising alternatives once again.

Risa Goluboff is John Allan Love Professor of Law, Professor of History, and Dean-Elect at the University of Virginia Law School. She is the author of "Vagrant Nation: Police Power, Constitutional Change, and the Making of the 1960s" (Oxford University Press, 2016).