Our Barbies, ourselves: The new diverse Barbies are progress — but we're giving them too much power 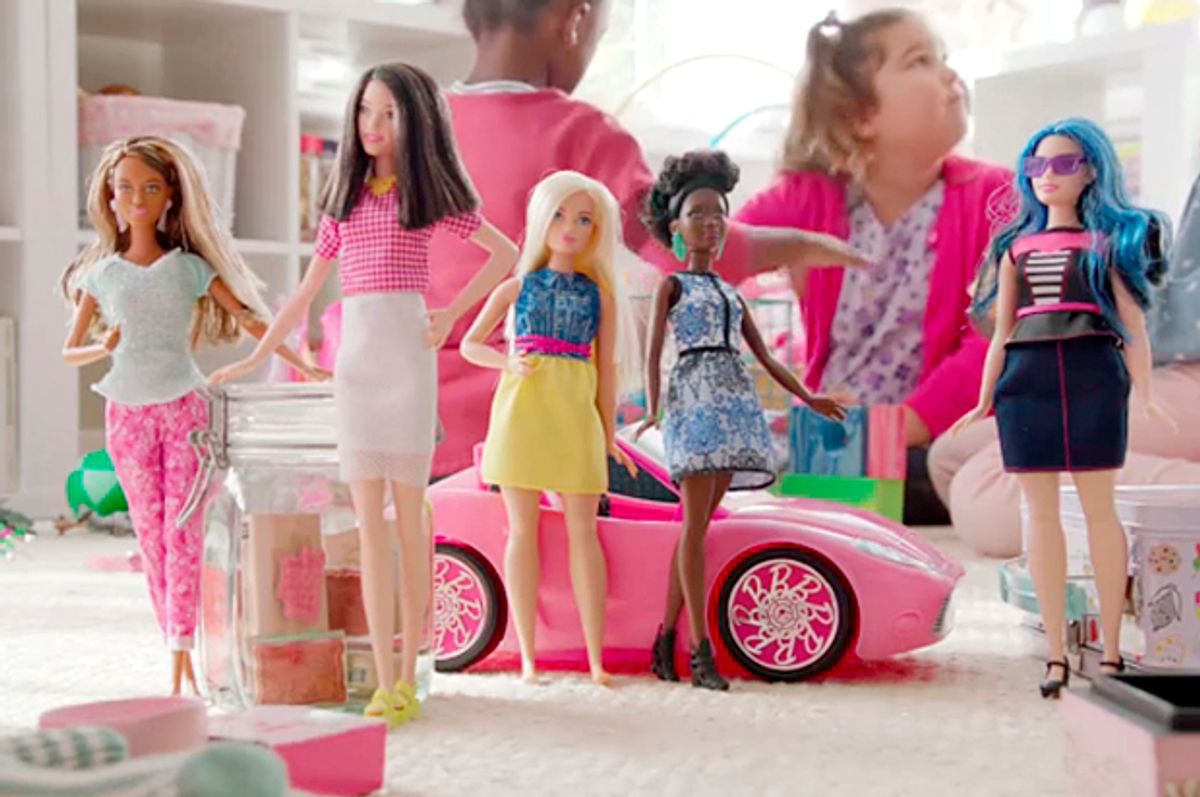 When I was a little girl I wrote the American Girl company, suggesting that they create a Jewish American doll. At the time, there were just a few American Girl characters—Kirsten, a blond, blue-eyed little girl who represented the Pioneer era; Samantha, a turn of the 20th century city girl with baby bangs and long, dark curls; and Molly, a WWII era suburban girl with auburn hair in braids and glasses. Each girl was not merely a doll you could play with, but came with her own unique story set within a specific historical time period. I loved learning about Kirsten, Samantha and Molly, and was thrilled when other girls were introduced to the series, like Felicity, a tenacious redhead growing up in Colonial America, and Addy, the first African-American American Girl, who represented the Civil War era.

I’m not sure what I exactly expected when I sent my letter. Perhaps I thought that they would issue my own personal doll, with my specific family story, traditions, experiences, with my hair and eye color, and personality. Instead, I received a letter back saying that the doll I dreamed of was not going to be in the works. The letter suggested that I could simply pretend that one of their current dolls was Jewish, since Judaism was a religion that any of the girls could practice.

Today, long after I’ve already grown up, the American Girl company has released other girls, ones who reflect other time periods and cultural, ethnic and religious groups. Indeed, today there is a Jewish-American historical doll named Rebecca Rubin, the daughter of Russian-Jewish immigrants in early 20th century New York City. I’m not sure if Rebecca would have quelled my desire to be represented when I was young or that I would recognize myself in Rebecca Rubin; her world of New York City life may have seemed equally foreign to a child who grew up eating guava paste and cream cheese for dessert and hearing stories about the Cuban Missile Crisis.

I’m sure another part of the American Girl company’s response to my letter was that there just aren’t enough Cuban-Jewish-American girls to make my niche concerns seem important, or certainly economically viable. Corporations aren’t moved by earnest letters from small children; they make changes in order to adapt to new markets.

Which is why the new squad of diverse Barbies, for the first time featuring not only a range of body types, but much greater diversity in types of hair and facial features, is both bittersweet and frustrating. Designed to appeal to “millennial moms,” new Barbie is about celebrating difference, rather than simply conforming to narrow beauty standards. Commercials for these new Barbies are carefully calculated feel good feminist PSAs featuring girls with lots of different body types, from all sorts of ethnic and racial backgrounds, enjoying playing with these new toys.

As someone who grew up with Barbie, it’s hard not to feel a little emotional when viewing these ads, which are a far cry from the Barbies I grew up with in the ‘80s and ‘90s, which boasted hair crimping technology, fake tattoos and a hatred of math. Unlike previous iterations of “diverse” dolls the newly updated Barbies offer an impressive seven skin tones, 22 eye colors, and 24 hair styles. They come in sets where girls and boys can imagine Barbie as everything from computer programmer to president.

Some critics say that Barbie has too much baggage to be a successful reboot. A stirring piece by Mona Awad says that, “Barbie will always be Barbie,” and I think it’s true that “traditional” Barbie is still currently the standard by which these new Barbies are compared. Certainly for women of my generation, there is only one iconic Barbie.

At the same time, it would surprise me if girls today look back at a time with only one kind of Barbie to choose from as a relic from a bygone era. Mattel’s reboot of Barbie may successfully do what smaller companies have been trying to do for years—offer more realistic-looking dolls that girls can look up to.

For a long time, parents had the option of buying any number of “body positive” dolls from a range of smaller companies. “Tree Change Dolls” created by Tasmanian artist Sonia Singh, are recycled dolls with the heavy makeup removed, giving dolls a more natural, childlike look. Likewise, the “Lammily” doll, created by Nickolay Lamm, is modeled on the average American woman’s height and weight measurements, and allows girls to customize their dolls with “real” features like freckles and cellulite.

By shifting the standard Barbie, Mattel also seems to be giving us, the consumer, the permission to be more body positive. On the surface this seems to be a sea change in the ways that toys are marketed to young people. Yet the bottom line with many of the progressive initiatives to revamp our toys—from Lego unveiling its first mini figure with a wheelchair to Goldiblox’s toys for girl engineers—is that our identity is shaped by consumer culture more than ever. Just because companies are noticing the diversity of human experience (and the innumerable untapped markets they’ve yet to explore) doesn’t mean that it is good for us, any more than it means that big name brands hawking these goods have any real interest in our self-esteem.

After all, corporations have long used progressive values to sell products—from the “You’ve Come a Long Way, Baby” Virginia Slim ads of the ‘60s and ‘70s, to the more recent Dove body-positive campaigns funded by the same corporation that sells us Axe’s brand of neo-masculinity. Certainly, offering kids greater space to see themselves in the toys they play with is a good thing, but we also don’t have any tangible evidence that body positive campaigns have done anything to make women feel better about themselves over the years. If anything, our current fascinations with plastic surgery, thigh gap selfies and waist trainers seem to suggest that women are as obsessed with bodily perfection as ever.

We do, however, have evidence that women are interacting directly with consumer culture in new and interesting ways. While my handwritten letter to the American Girl company is now lost somewhere in my parents' attic, in today’s world enthusiastic consumers are constantly demanding that companies create more diverse and inclusive products and sharing company responses on Twitter.

Today, companies also have sizable competition from creative and savvy consumers. Nigerian scientist Haneefa Adam, for example, created “Hijarbie” who wears more modest clothes and a headscarf. On her Instagram, Adam describes her excitement at featuring more diverse Barbies of color in the future, “I couldn’t find the different types in Nigeria…I’d have loved to dress up a black doll myself too.”

Of course, one of the most exciting aspects of the new Barbie initiative is holding up real-life women as “sheroes” for women of all ages to look up to, starting with the Ava DuVernay doll, complete with her very own director’s chair, and comfortable-looking sneakers. The choice to feature an accomplished black female film director is a revolutionary reimagining of what it means to be an American doll icon.

In Ariel Levy’s essay “Dolls and Feelings” Jill Soloway revels in how playing with dolls teaches girls how to be fiercely competent directors: “We all know how to do it. We fucking grew up doing it! It’s dolls. How did men make us think we weren’t good at this? It’s dolls and feelings.” My hope for the world of New Barbie is that the emphasis continues to be on allowing girls to imagine new worlds and new possibilities, both for how they see themselves and how they see the world around them. The demand for greater representation in the toys children see and play with is genuine and necessary, but it’s also important that girls (and boys) learn to see themselves as more than just the sum of the pre-packaged plastic bodies they love to play with. I think we can appreciate these creative steps, while still being skeptical about the extent that consumer culture can help set us free from stereotypes and poor body image.

After all, even if they now come in various shapes and sizes, every single newly purchased Barbie still has to be broken out of her box.