The big money behind best in show: How the Westminster Dog Show's four-legged TV celebrities fuel the high-dollar puppy business

The WKC Dog Show prides itself on words like history and tradition, but the truth is that serious cash is at stake 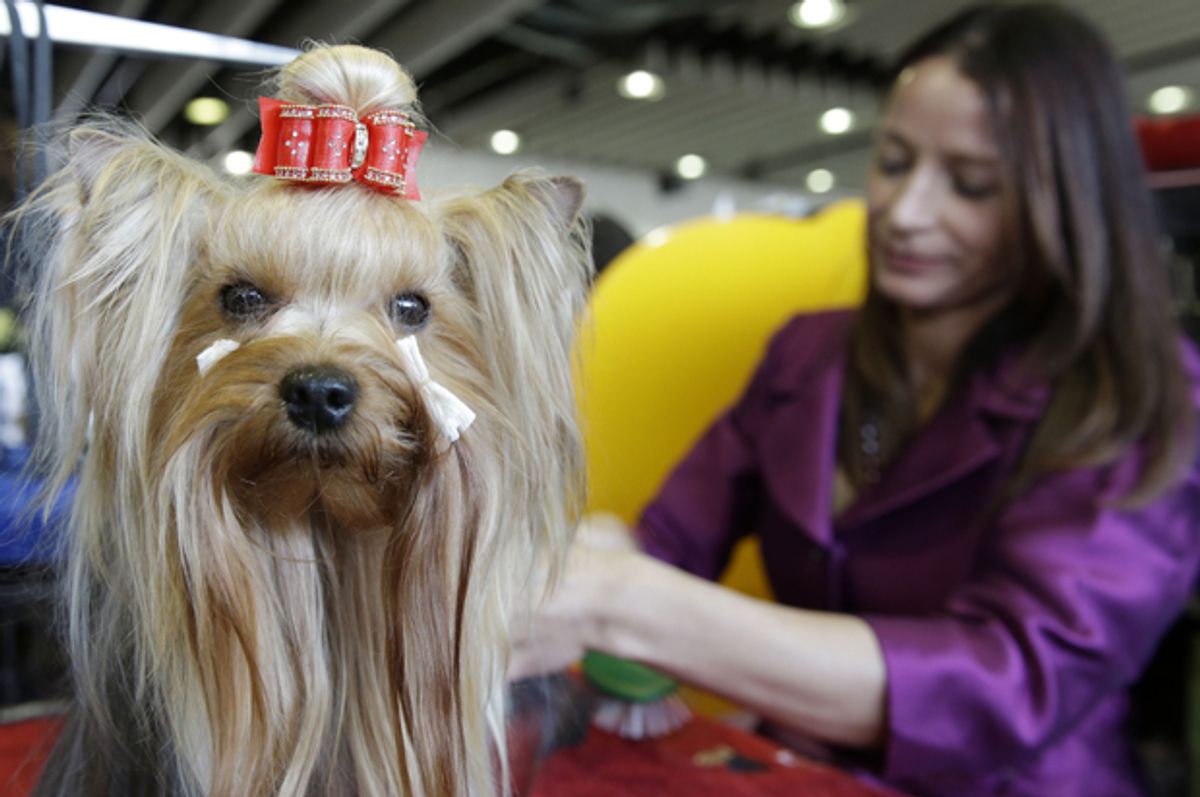 When the beagle Miss P took Best in Show honors at the 2015 Westminster Kennel Club Dog Show, it was reported as a huge upset within the fancier world. Miss P, who came from a small Canadian kennel, outshined the odds-on favorite, Matisse, a Portuguese water dog who was as close to American royalty as it gets — a cousin of President Obama’s second puppy Sunny, with a big-money co-owner in Milan Lint, managing director and COO for Portfolio Management Group at the global investment firm BlackRock.

Matisse, at least in terms of the people around him, was the dog far more like Sky, the wire fox terrier who won Westminster in 2014—another dog in whom wealthy people owned shares like a corporation. In fact, according to multiple sources, Sky had no fewer than five owners whose financial backing originated in South America, Europe and beyond. They included Victor Malzoni Jr., a construction magnate and owner of Hampton Court Kennels in Brazil who sponsors the campaigns for a half-dozen show dogs a year in the United States, plus more at shows in Europe. Another of Sky’s owners was reportedly Torie Steele of Malibu, California, who made her fortune helping Italian fashion designers such as Valentino and Versace enter the U.S. market through her flagship Torie Steele Boutique on Rodeo Drive in Beverly Hills, California. She was the second wife of billionaire Sam Wyly, who has owned everything from the craft-store chain Michaels to the Maverick Capital hedge fund.

People who participate at events like Westminster are loathe to talk about how much money is really at stake in the show ring, but the sale of purebred dogs worldwide is a multibillion-dollar industry — not just for the award-winning breeders, but also for the owners of large-scale breeding farms, pet-store puppy distributors, auctioneers and pet store owners who will ultimately fill the majority of demand for puppies who look like the television stars Miss P and Matisse and Sky, purebred puppies that must be produced en masse after a high-profile win.

The American Kennel Club, which sanctions the Westminster show, admits freely that driving up business is one of the main purposes of such televised events in a Kennel Spotlight magazine article: “How do these AKC events help breeders? They create preference and demand for purebreds, no matter where the consumer chooses to buy their purebred dog.”

Learning how that demand is filled goes far beyond what most of us have seen in depressing “puppy mill” commercials. Following the money to see just how big of a market dogs are worldwide today can be absolutely mind-boggling.

For starters, there’s the booming business of champion dogs’ frozen semen. That money-maker is old news in the breeding world; the American Kennel Club first recognized a litter of puppies conceived from frozen semen back in 1981. With the ability to create an unnatural number of champion-lineage puppies from the stored stuff, a Westminster winner no longer even has to be alive to keep the money coming in for his owners. Such was the case of a Standard Poodle named Peter, the late Westminster Best in Show winner whose frozen semen was accidentally thawed and destroyed at a Pennsylvania clinic in 2010. His owners sued and in a precedent-setting case were awarded more than $200,000, which the jury determined was the value of the samples. Had the owners sued for the value of the puppies that could have come from each sample, the court award easily could have risen to more than $1 million.

Then there are the dog auctions, where the owners of large-scale kennels (some would call them puppy mills) gather to outbid one another while purchasing new breeding stock. The largest legal dog auction in America is Southwest Auction Service in Wheaton, Missouri, whose owner, Bob Hughes, once sold an English Bulldog for $12,600. Hughes’ largest auction to date, according to his marketing materials, brought in $514,371.

On advertised days inside his barn, anyone wanting to get into the breeding business can walk in off the street, grab a snack at his concession stand, sit in his bleachers and bid on everything from Chihuahuas to Golden Retrievers to Rottweilers to Yorkshire Terriers, sometimes brought out at a pace of more than 300 dogs per auction.

“We’ll only know what these dogs are really worth when the American Kennel Club lets me hold an auction just after Westminster one year, using the champion,” he told me. “They do it with horses. Some horses go for a quarter-million dollars apiece. What if Tiger Woods’ wife likes a certain kind of dog and wants to bid up the price to get the best one? We’ll never know the truth on these prices until they let me do an auction of the champion dogs.”

There also are the owners of legal, regulated puppy farms, guys like Dave Miller, former president of the Missouri Pet Breeders Association. He was a bird hunter who had raised some hunting dogs and, by a stroke of luck, got in on the Puggle craze that hit America in the early 2000s. His first year with just three females, he sold $10,000 worth of Puggle puppies, and he eventually invested in about $180,000 to build outdoor pens and kennels that meet state and federal requirements. His farm grew to become just one among about 2,600 commercial puppy operations in the central United States large enough to require licensing by the federal government.

Miller has fifty or so adult Newfoundlands, Beagles, Shiba Inus, Corgis and Puggles living outside behind his home. As of 2012, he says, he was grossing about $140,000 per year.

And if Miller’s operation sounds big, it’s nothing compared with the Hunte Corporation, which, at its height before the 2007 global recession, was moving some 90,000 puppies a year from farms owned by people like Miller into pet stores all across America, generating annual revenues of $26 million. Today, Hunte’s business is about half that, all coming out of its $10 million facility in Goodman, Missouri, near the corporate headquarters of Walmart and Tyson Foods.

Hunte’s kennels can house somewhere in the vicinity of 1,300 puppies at a time, and the inventory of puppies turns over once a week, starting with “buy day” on Tuesdays and ending with distribution to pet stores via semi-trailer trucks that cost about $350,000 to custom-outfit with climate-control systems, LED lighting and, of course, cages to hold the merchandise. If anybody has a problem with any of that, Hunte’s officials say, they’re welcome to try to find a puppy distributor who does things better when demand spikes after televised dog shows like Westminster.

“Go up the road to our competitor,” says Michael Stolkey, director of corporate sales. “See if they’ll let you in.”

Trying to see the scope of the business beyond the dog show can be like looking through binoculars into a fog. The co-owners of Miss P, the winning beagle from the 2015 Westminster Kennel Club Dog Show, say their kennel in Canada produces just one or two litters of puppies a year. The effect of that beagle being beamed onto television sets worldwide seems like a whole lot of nothing—upper-class dog fanciers navel-gazing and self-congratulating on live television—but in reality, they’re setting the top end of a market that is vast, entrenched and highly profitable for thousands of other people.

Lest there be any confusion about why the AKC sanctions events like the Westminster show, simply refer back to that article that the American Kennel Club published in Kennel Spotlight magazine for commercial breeders to read.

Adapted from "The Dog Merchants: Inside the Big Business of Breeders, Pet Stores, and Rescuers," to be published May 2 by Pegasus Books.