Profiting off of chaos: How the U.S. privatized its war in Afghanistan — Antony Loewenstein on "Disaster Capitalism" 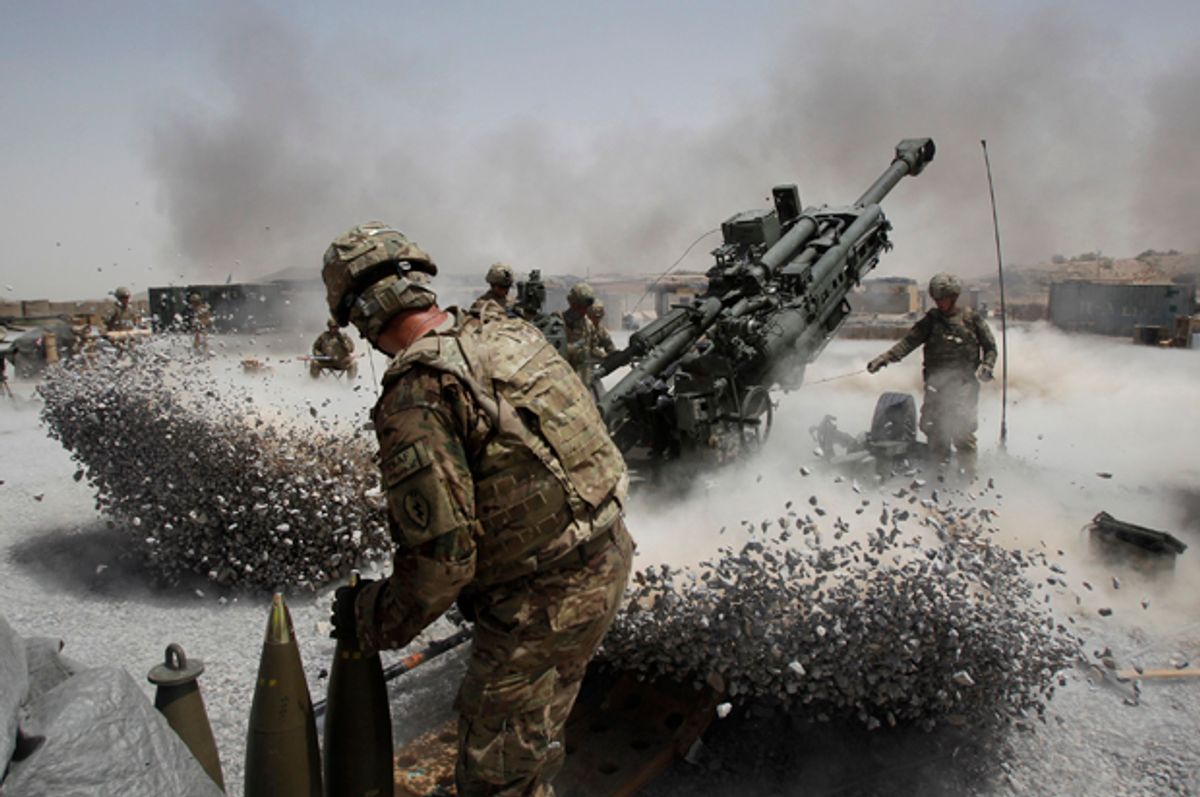 "The corporation is now fundamentally more powerful than the nation-state," writes journalist Antony Loewenstein in his new book "Disaster Capitalism: Making a Killing out of Catastrophe."

"Many ongoing crises seem to have been sustained by businesses to fuel industries in which they have a financial stake," he explains. "Companies that entrench a crisis and then sell themselves as the only ones who can resolve it."

Loewenstein, a columnist for the Guardian, traveled the world in order to understand just how multinational corporations profit off of such chaos. The Australian-born yet decidedly cosmopolitan journalist devotes the meticulous and daring tome to reporting on the foreign exploitation he witnessed in Haiti after the 2010 earthquake and the destructive mining boom in Papua New Guinea, along with seemingly dystopian prison privatization in the U.S., predatory for-profit detention centers for refugees in Australia and ruthless austerity in Greece.

In the book, Loewenstein expertly shows how corporate control of not just the domestic, but also the global political system has led to a drastic "erosion of democracy."

A quote he chooses as the overture sets the tone for the ensuing pages. "It is profitable to let the world go to hell," warns scholar Jørgen Randers, a professor of climate strategy at Norwegian Business School, while railing against "the tyranny of the short term." This quote succinctly summarizes exactly how disaster capitalism operates.

The concept of disaster capitalism is derived from a similar work, "The Shock Doctrine: The Rise of Disaster Capitalism," an influential 2007 book by journalist Naomi Klein. In some ways, "Disaster Capitalism" can be seen as a sequel to Klein's book, yet Loewenstein's formidable work stands out in its own right.

Salon sat down with the journalist to discuss one of the more explosive controversies he uncovers in his book: how the U.S. war in Afghanistan was privatized.

Loewenstein spent time in war-torn Afghanistan, as well as neighboring Pakistan, researching for "Disaster Capitalism." His compelling recounting of his experiences paints a picture of a crisis-stricken world in which virtually everything has been privatized, in which private military companies, or PMCs — 21st-century warlords — exercise more control over countries than their own inhabitants.

A slew of Western multinational corporations quite familiar to Americans appear throughout the chapter, including Northrop Grumman, DynCorp, Halliburton and more.

The personal interactions Loewenstein has with military contractors on the ground are some of the most fascinating. A British PMC managing director the journalist met in Kabul, whom he refers to simply as Jack, bluntly admits his corporation "survives off chaos."

Predicting future U.S. wars in Africa, Iran and Korea, the corporate military executive tells Loewenstein, "If we can make money, we'll go there."

"Disaster Capitalism" bolsters Loewenstein's growing body of important work. Among his other books are "Profits of Doom: How Vulture Capitalism Is Swallowing the World," a kind of 2013 prequel to "Disaster Capitalism"; "The Blogging Revolution," a 2008 investigation of how bloggers around the world challenge their oppressive governments; and the best-selling "My Israel Question," an exhaustive 2007 account of Israel's crimes against the Palestinians, and a profound and intimate exploration of the author's Jewish identity.

For his previous books, Loewenstein traveled widely, from Palestine to Iran, from Saudi Arabia to China, from Cuba to Egypt and beyond. For "Disaster Capitalism," Loewenstein went even further. When Salon contacted him to schedule an interview, the intrepid journalist seemed every time to not only be in a different country, but even on a different continent.

This is the first in a two-part review of Loewenstein's reporting in "Disaster Capitalism." Another piece will be devoted to Loewenstein's findings in Haiti, a small country that has been virtually taken over by Western NGOs. Loewenstein spoke with Salon about both little-discussed yet tremendously important issues.

Jack, the British PMC managing director you met in Kabul, said "we don't call ourselves mercenaries." Are they mercenaries? Should they be called that?

Not all private security interests in Afghanistan are mercenaries; many men are just security guards protecting embassies or Western interests. But mercenaries are a little-reported aspect of the war, either directly engaged in killing or capturing suspected insurgents (a key failing of the Western war in the country has been its insistence on designating any opponent of the conflict as "Taliban" and therefore "terrorist") or training Afghan forces to do the same thing, often inflaming conflicts in local villages.

You call imperialism "the dirtiest word in modern English" and note, "There is not a country I visited for this book in which the legacy of imperialism does not scar the landscape and people." You also point out that "there were often more contractors than soldiers in Afghanistan." Jack said it is cheaper for countries to use PMCs than it is to put their own boots on the ground.

Do you see this as an outsourcing of imperialism and neo-colonialism, if you will? Is this how war will work in the future?

The U.S. government, along with its many allies, likes using private assets to further geo-political interests. The initial motivation when invading Afghanistan was revenge for 9/11, but this quickly morphed into a messy project to control the nation and partner with a corrupt central government and warlords across the country.

The reason I use the term "imperialism" to describe the wars in Afghanistan, Iraq, Libya and beyond — along with U.S.-backed autocratic partners in the Middle East, South America, Asia and Africa — is that there's no other way to describe attempts to secure energy reserves and economic influence in the modern age.

War has always worked this way, but the inclusion of globalized private entities removes one more level of accountability. Today in Afghanistan there are around 30,000 contractors working for the Pentagon alongside the U.S. military and Special Forces. And the Pentagon won't acknowledge how many soldiers are truly fighting ISIS in Iraq.

Can you talk more about Afghanistan's enormous natural resources, the TAPI pipeline, drugs, etc.? This is little discussed. Why do you think that is?

During both the Soviet and American occupations of Afghanistan, huge discoveries of natural resources occurred. There is an estimated U.S. $1-4 trillion of untapped minerals, oil and gas and yet most of it is unreachable due to security concerns and corruption.

I have been investigating these issues for my book, and also the documentary in progress, "Disaster Capitalism," with New York filmmaker Thor Neureiter.

Natural resources will not sustain Afghanistan after most of the Western aid dries up, and neither the U.S. government nor Afghan authorities have any answers for long-term sustainability (the proposed TAPI pipeline crossing Pakistan, Afghanistan, India and Turkmenistan is ambitious but prone to problems).

Drug cultivation has soared during the U.S. occupation. Too many Western reporters have framed the Afghan war as simply between U.S. forces and the Taliban when in reality Afghanistan has a complex history that never tolerates long-term occupation.

You write about the "military-enforced bubble," in which the foreign occupying army is completely out of touch with the locals. An Afghan translator told you the U.S. "only understood force." Can you expand?

A constant refrain I heard in Afghanistan, during my visits there in 2012 and 2015, was the inability and unwillingness of U.S. and foreign forces to listen to the Afghan people. It's one reason the U.S. relied on faulty intelligence to understand what Afghans were thinking about their presence.

As the security situation deteriorated after 2004-2005, and U.S. forces falsely framed any Afghan who opposed the occupation as Taliban, the U.S. used a failed counterinsurgency program (designed by David Petraeus and Australian David Kilcullen) that inflamed Afghans.

There has never been accountability for this plan, including by the countless Western journalists seduced by U.S. military talking points.

You talk about the relationships between the U.S. military, USAID and private companies, and say "military and humanitarian work were all too often fused in the post-9/11 world." Can you comment?

A key component of USAID in the post 9/11 world is using the military to deliver its goals. This fundamentally misunderstands the importance of maintaining neutrality when delivering aid.

The U.S. government's SIGAR (Special Inspector General for Afghanistan Reconstruction) regularly reports on the U.S. $110 billion spent in Afghanistan on so-called nation building since October 2001, and how USAID was regularly used as a mask for a corporate and military agenda across the country.

Where else is the private security industry growing?

The definition of private security is expanding to include the growth of private armies in often unregulated and chaotic places (from Iraq to Afghanistan and Libya to Syria). South African mercenaries were working in Nigeria against Boko Haram and Colombian forces operated in Yemen thanks to the United Arab Emirates.

Post 9/11, the Bush administration saw an opportunity to implement an extreme neoconservative agenda with the support of its friends in the private sector. They claimed it would save money and be more efficient but the reality was uncontrolled mercenaries and private security in countless war zones.

When Barack Obama was a candidate for President in 2007, he pledged to change this out-of-control contracting since 9/11. However, nothing has improved since he took office due to a number of factors including failing campaign finance laws and Congressional inertia to punish corporations breaking the law.

You conclude the chapter saying, "we created chaos." What do you think the legacy is of the now 15-year U.S. occupation, especially now, with the rise of ISIS and the resurgence of the Taliban?

The Taliban now control more of Afghanistan than at any time since October 2001. President Obama has now pledged to maintain an indefinite occupation and the U.S. military claims U.S. forces will need to stay in the country for decades to support a failing Afghan state.

The presence of ISIS only complicates the picture, especially for Afghan civilians.

The longest war in U.S. history has not achieved any of its stated goals and the Afghan people, often forced to choose between the Taliban and a U.S.-backed warlord, often pick the former. That's the legacy of the U.S. war.