Taylor Swift is everything that's wrong with the Grammys and the music industry: Sanitized, self-congratulatory and safe 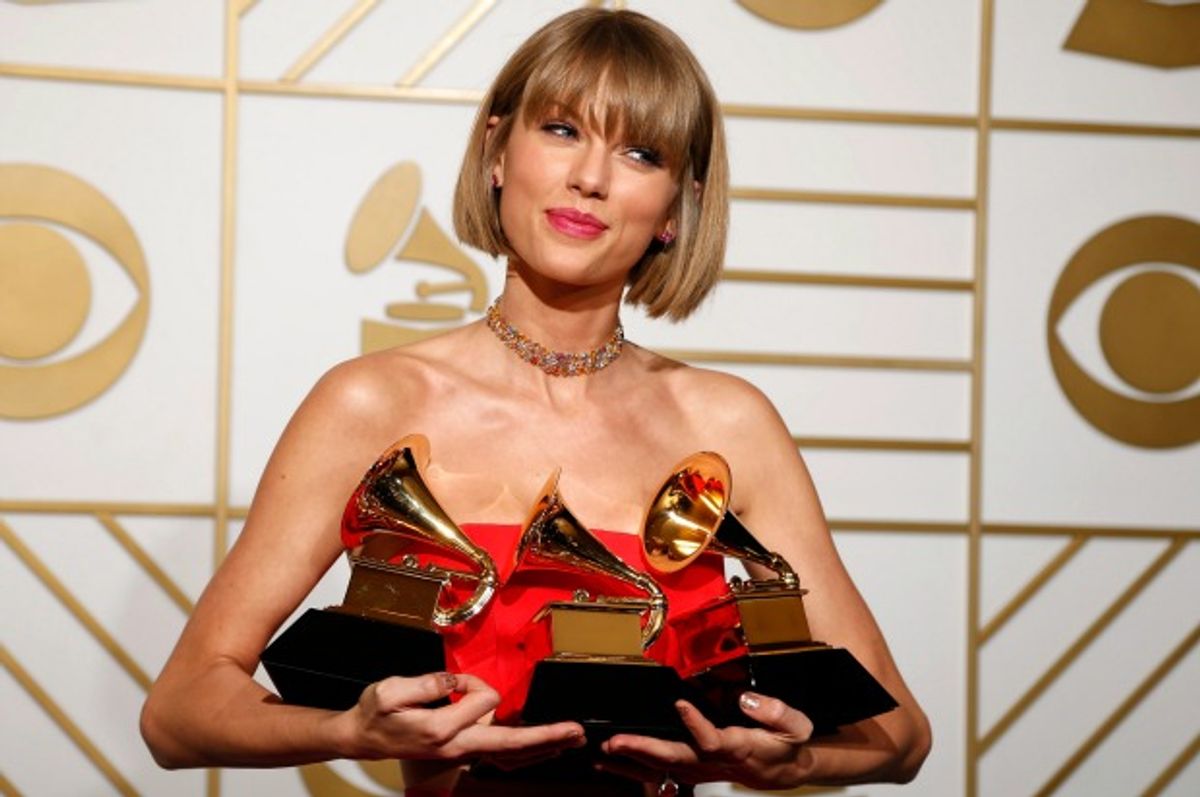 The mainstream music industry has always struggled to both deal with and react to change. Genres, musical formats, technology, consumer habits—you name it, chances are good any innovations in these areas have been adopted with an (often stunning) lack of foresight or strategy. In other words, reacting to things, not being proactive, is the name of the game. Nowhere is that tension more obvious than at the Grammy Awards, which annually struggle with how to honor music's proud traditions and cherished artists, while still acknowledging new music and staying relevant to modern trends. Part of this pressure comes from the fact that the Grammys also have to double as an entertaining TV show; the disconnect between ratings, audience and artistry is often too vast to overcome.

It's no wonder that in recent years, the Grammys have evolved into being a dressed-up version of the American Music Awards, an annual event whose winners are dictated by public popular opinion. (See the complete list of Grammy winners here.) That was clear on Monday night in Los Angeles at the 58th Annual Grammy Awards, which drew the likes of superstars Taylor Swift, Beyoncé, Adele, Lady Gaga, Justin Bieber, Ellie Goulding, Carrie Underwood, The Weeknd, Demi Lovato and Bruno Mars, festival headliners like Florence Welch, as well as up-and-comers such as Meghan Trainor, Tori Kelly, James Bay, Chris Stapleton and Andra Day. Many of these artists have shaped the sound of modern pop music, which hews toward sleek electronic production and sophisticated digital grooves, while others have found a niche thanks to well-crafted, from-the-heart songwriting.

Neither approach was very prominent in last night's performances, however. Anyone who didn't know any better would think that the current crop of pop musicians are staid traditionalists. In a further attempt to cement Bieber as a mature artist, he started his performance with a solo acoustic guitar rendition of "Love Yourself," before scampering to join collaborators Diplo and Skrillex for a rocked-out take on "Where Are Ü Now." Country darling Stapleton took part in a B.B. King tribute; Best New Artist nominees Bay and Kelly strummed guitars and faced one another on a tiny circular stage for their performance; and Trainor and Lovato were part of a hit-or-miss Lionel Richie tribute. Goulding and Day joined forces for a duet, and while the latter managed to push her powerful voice forward in spots, the overall vibe was curiously subdued. And although the Weeknd's performance started with a fierce, funky snippet of “Can’t Feel My Face,” it quickly moved into an occasionally pitchy (but ultimately successful) piano-led, sparse version of "In The Night."

Certainly it's enjoyable to see a different side of an artist, but too often these metamorphoses were at the expense of vibrancy, fun and personality. In fact, the underlying message in all of these revamps is that these artists—many of whom possess relentlessly modern approaches—needed to transform into something more adult, and perhaps use more authentic tools, while at the Grammys. It's not quite an anti-pop bias, but it hints at a discomfort with electronic and modern Top 40 music, and shows a lack of understanding about youth culture's appeal.

The latter Grammy criticism is nothing new, of course, but it used to be lobbied at the Recording Academy when it insisted on honoring artists past their creative prime. Today, the Grammy Awards' embrace of popular artists and pop music tends be misguided and driven by precedent or safety. How else to explain 2014 sensation Meghan Trainor winning Best New Artist this year? Or Swift winning Album Of The Year for "1989" ahead of Kendrick Lamar's "To Pimp A Butterfly"? Of greater concern is how few artists seemed willing to take any sort of risks last night. Country act Little Big Town did with a stripped-down, elegant performance of the hit "Girl Crush," which featured strings and vocalist Karen Fairchild at the forefront. And so did Lady Gaga: Her polarizing, appropriately flamboyant David Bowie tribute medley—which was criticized as being everything from "cruise ship hell" to a bad Elvis Presley impersonation—was messy and exciting, and unafraid to flaunt its imperfections.

But it was Kendrick Lamar, who took home five Grammys and was responsible for the night's most indelible appearance, who proved that he's head and shoulders above pretty much everyone else going right now. His two-song performance started with a laser-focused "The Blacker The Berry," which took place in a prison setting: Lamar and the others with him onstage wore inmate clothes and chains—in fact, the singer kept the latter on while singing the song—in an obvious nod to the racial tension boiling over in cities across the U.S. The scene shifted to the larger stage for the Black Lives Matter-associated "Alright," as a large fire raged and illuminated a series of warrior-like tribal dancers.

At the end of the song, the camera panned to a close-up of Lamar's face and the microphone as he rapped, sweat droplets flying off his head. The camera perspective then shifted back and forth quickly, as if recreating dizzying stop-start animation. The effect was mesmerizing, powerful and revelatory—three things most of the night's musical interludes lacked. But more important, there was an urgency to Lamar's performance that felt empowering and radical, as if his music and performance could foment change and push progress. While plenty of the artists who won Grammys last night have made meaningful music, the night felt utterly safe and devoid of substance.

There were exceptions, of course: A beamed-from-New York performance of the hit Broadway musical "Hamilton" added spark, as did Alabama Shakes' smoldering take on their "Don't Wanna Fight," which let frontwoman Brittany Howard shine. But too many musicians felt shoehorned awkwardly into a prefab performance, which meant their performances felt forced and unnatural. (Love him or hate him, but Bieber at least seemed to be having a great time flailing around onstage with his buds.) The unfortunate result is that the ceremony was rather bland, bogged down by stagnancy and the sense that a lot of artists don't really have much to say when their digital veneer is removed.

One artist who is outspoken, Taylor Swift, did unleash a rather pointed mic drop — in an apparent subtweet aimed at Kanye West (though she doesn't name him, of course) who boasted of Swift “I made that bitch famous” on his new album “The Life of Pablo” — after winning Album of the Year that had many in the audience (including Alabama Shakes' Brittany Howard) nodding in agreement. "As the first woman to win Album of the Year at the Grammys twice, I want to say to all the young women out there: There are going to be people along the way who will try to undercut your success or take credit for your accomplishments or your fame. But if you just focus on the work, and you don't let those people sidetrack you, someday when you get where you're going, you'll look around and you will know it was you, and the people who love you, who put you there. And that will be the greatest feeling in the world. Thank you for this moment."

Swift said all this while looking directly at the camera, as if to underline every last one of her words several times, in bright red marker. On the surface, the soliloquy was empowering and completely understandable—after all, Swift's been undermined time and time again since going pop for "1989," and her rabid young female fanbase needs to hear this kind of encouragement. But even this moment felt as note-perfect and well-rehearsed as her show-opening performance of "Out Of The Woods," and a canny way to deflect criticism away from her win over Lamar and get out in front of those who might feel like she didn't deserve the honor. It was PR spin masquerading as sincerity. Some might say that's a good way to sum up music in 2016; at least going by the Grammy Awards, it's difficult to argue with that characterization.