The GOP's terrifyingly literal "Brat Pack": Why Saturday's debate proves these candidates are all petulant children 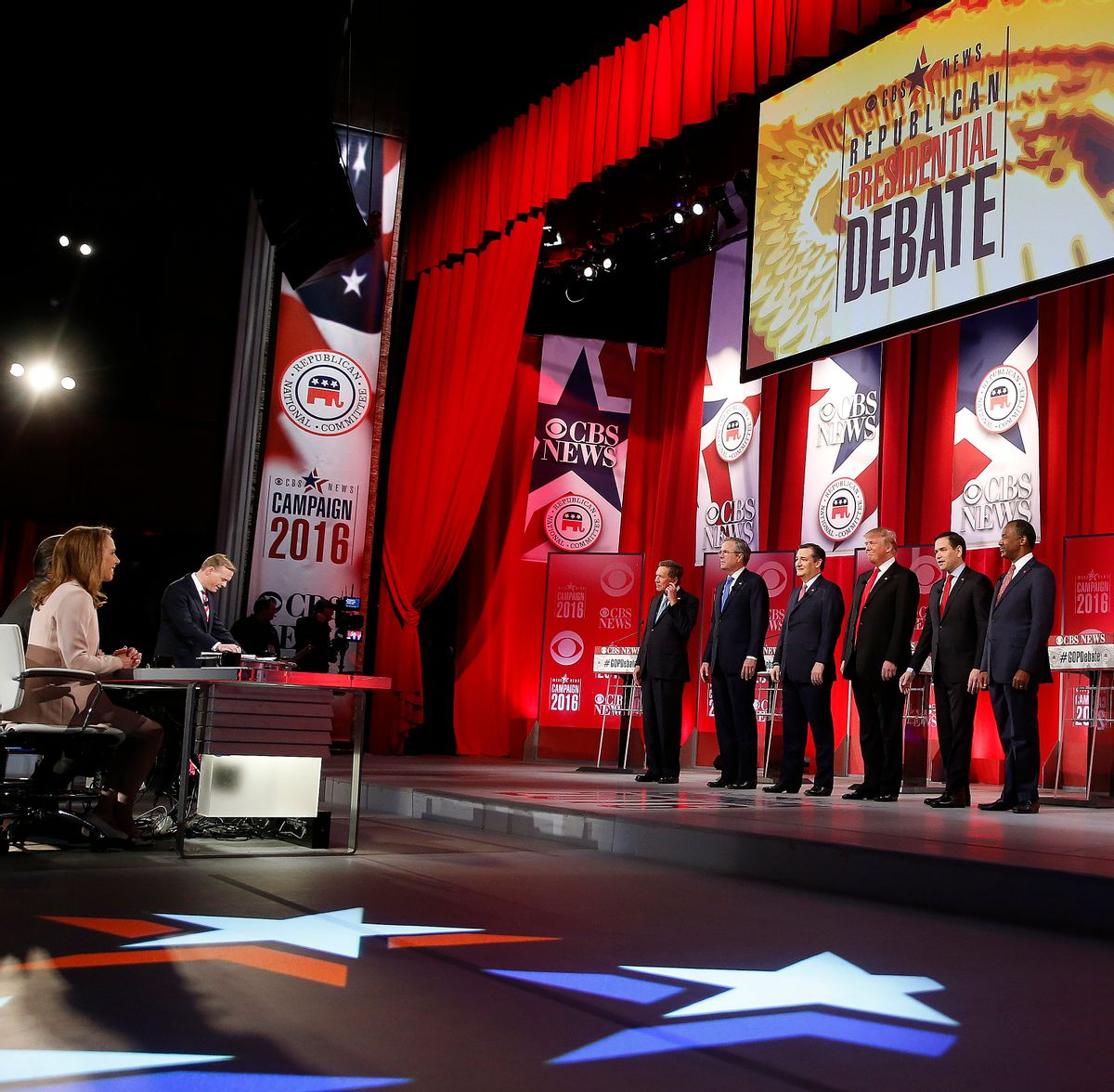 For many months now, we've been playing with the "clown car" metaphor to describe the Republican presidential primary field. In hindsight, I think we misjudged the tone. There's a simpler and more salient means of nailing the behavior of the GOP's presidential reality show, and it's impossible to have watched Saturday night's CBS News debate and see these blithering empty-suits as anything other than children.

In fact, I was half hoping one of the late night shows would go there -- casting each Republican candidate with little boy performers in suits to re-enact the debate word-for-word. There's still time, I suppose.

While the Democratic race has grown more incendiary, with Hillary Clinton and Bernie Sanders engaged in a fairly typical intra-party shovel fight about issues, flip-flops, voting records and whether individual policy platforms are too ambitious or not ambitious enough, the behavior of the Democratic candidates is relatively standard, though painful. By contrast, the Republicans spent a not insignificant length of time during Saturday's debate literally acting like petulant kids. (The chief irony being that several of the candidates have accused President Obama, one of the most even-keeled and personally disciplined presidents in modern history, of acting childish.)

Yet here's what we observed from the Republicans on national television the other night:

And these children want to be our next president!

Let start with Trump. Yes, I get it. Trump shouldn't be saying "fuck" and "pussy" during his stump speeches. But even before he let the obscenities fly, we already knew he lacked the self control, decorum and presidential dignity required by the office. The addition of the profanity hasn't helped on that front, but his disciples don't seem to care all that much, especially given how his use of "pussy" came from a supporter who was ridiculing Ted Cruz's posture on torture. Cruz, apparently, isn't quite as fetishistic about waterboarding as Trump and therefore Cruz is a wimp.

But there it was on television: The Republican frontrunner for president being scolding into apologizing for saying naughty words. Indeed, Trump hilariously promised to never say those words again, likely sending thousands of Republican voters to Google to search for the specific words he used. Perhaps he should've been sentenced to write "I will not say the f-word in public!" a thousand times on Glenn Beck's chalkboard.

Next, there was Jeb Bush, who seems to be invoking his mother, Barbara Bush, an awful lot in order to defend his own record. That's right, don't criticize Jeb because he'll tell his Mommy on you. The following exchange actually took place during the debate, and not during middle school recess, in midst of a race for class president:

Notice how Trump once again nailed poor feckless Jeb at both ends of this exchange, yet Jeb continues to step into the propeller blade -- pathetically struggling to one-up the frontrunner only to be sucker-punched every time. Nevertheless, Trump, the candidate who had to apologize in front of the class for saying bad words also made fun of Jeb's Mommy, forcing Jeb to tattle on him to the entire nation.

Meanwhile, Ben Carson can't seem to do anything correctly. Not only during the previous debate was he baffled by the notion of, you know, walking onto a stage and standing behind a designated podium, but this time around he referenced a Joseph Stalin quote that wasn't really a Stalin quote.

CARSON: Joseph Stalin said if you want to bring America down, you have to undermine three things: Our spiritual life, our patriotism, and our morality.

Sharp. Unfortunately, the infamous Soviet strongman never said those words, whether in English or Russian. It turns out Carson horked the quote from a viral Facebook meme. Yes, Ben Carson, a world-renowned brain surgeon and a presidential candidate, is getting his debate prep from Facebook memes. Perhaps we should inquire if he's getting his foreign policy advice from "Call Of Duty." At last check, he hasn't retweeted any stories from The Onion believing they were real news stories, but it's only a matter of time.

To repeat: These are candidates for President of the United States.

And finally, Ted Cruz and Marco Rubio both failed the most important history question of the week. Supreme Court Justice Antonin Scalia died hours before the debate -- enough time to get the history correct, mind you. Subsequently, the first question out of the box during the debate had to do with whether the Republicans will play by the rules and confirm President Obama's nominee for the bench. First, Rubio falsely stated that it's been 80 years since a president nominated a replacement justice during his final year in office.

RUBIO: I do not believe the president should appoint someone. And it's not unprecedented. In fact, it has been over 80 years since a lame duck president has appointed a Supreme Court justice.

And then, Cruz jumped in with the same "80 year" nonsense. Here's the complete exchange:

CBS News' John Dickerson was correct, of course. Justice Kennedy was nominated by Ronald Reagan on November 30, 1987 and confirmed by the Democratic Congress in February, 1988, with less than a year to go before Reagan was succeeded by George H.W. Bush. For the first time perhaps ever, Cruz appeared stunned into silence by the facts, leading to an awkward and interminably pregnant pause. Oh, and the audience booed Dickerson when he corrected Cruz. In other words, the Republican crowd booed the facts in what has to be one of the most glaring illustrations of the party's abandonment of reality.

By the way, on Sunday's "Meet The Press," Chuck Todd pressed Rubio on the matter, prompting Rubio to blurt, "It doesn't really matter what Reagan did back in '87." This successfully confirms that the Republicans cherry-pick Reagan to satisfy their propaganda almost as often as they cherry-pick the Bible. Regardless, Rubio trampled on verifiable history -- twice in roughly 12 hours.

But who cares? We're only talking about nominating Supreme Court justices, one of the most crucial roles of the American president. It's not like it matters whether presidential candidates are able to respond coherently about it. Then again, at least they didn't answer using a fake Facebook meme.

Perhaps in the next televised debate, one of the moderators should ask whether they prefer to have their PB&J with the crusts cut off or whether they plan to sign executive orders using crayon or magic markers.