Donald Trump's despicable race-baiting: Why his xenophobic immigration platform is getting even worse

The billionaire is no stranger to ugly racial appeals. He's been doing it for years—but now he could be president 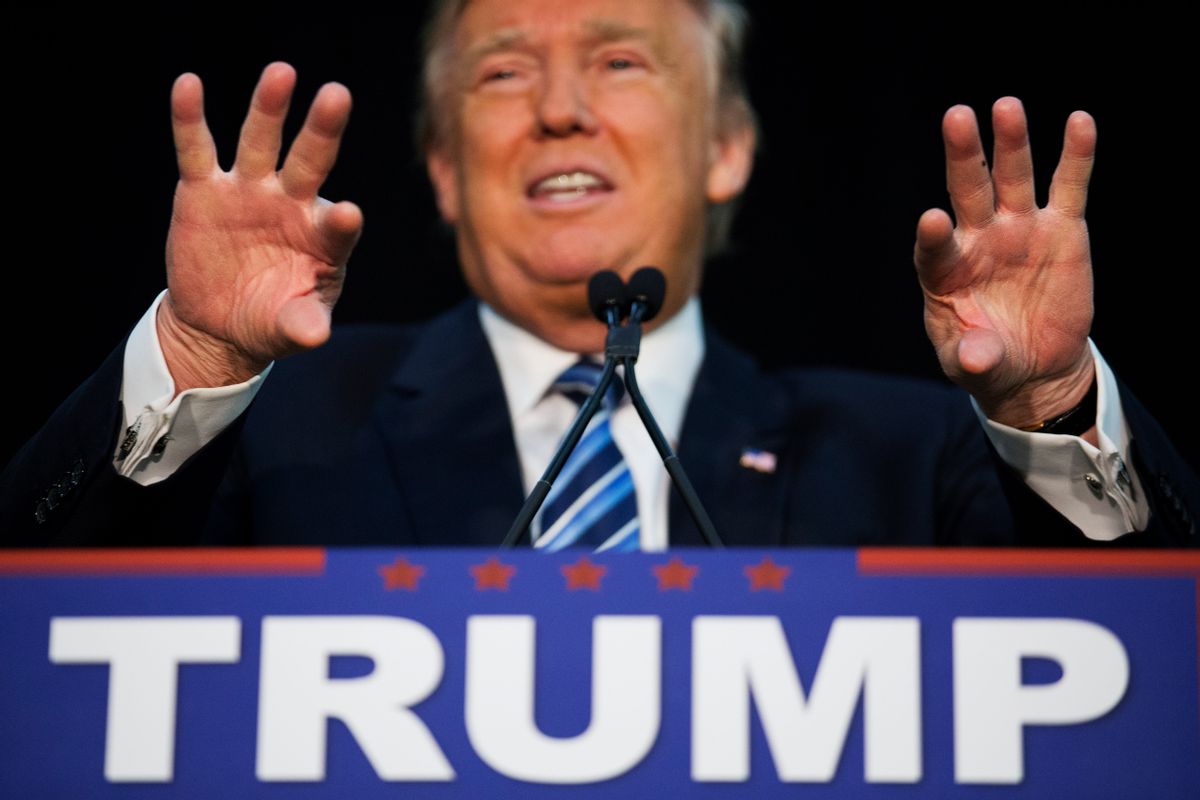 In his press conference on Monday, a reporter asked Donald Trump what he would do with the DREAM kids, those undocumented young people who were brought to the U.S. as children. You'll recall that in the wake of the failure of the DREAM act in the congress, President Obama issued a policy in 2012 allowing them to apply for a deferral of deportation, assuming they met certain criteria. In the past, Trump has insisted they would "have to go" along with their parents. In fact, he's said that the American children of undocumented workers would be deported as well.

When asked about it in the press conference, he oddly said DREAMers were "great" and then launched into a speech which clearly gave the opposite impression:

Fair enough. But then he switched gears:

Trump is known for exaggerating the unemployment rate, so the figure of 58 percent unemployment is wrong. Obviously. African American youth unemployment is too high, absolutely. But as Jonathan Capehart reported in the Washington Post last month, it's actually lower right now than it's been in years. In December 2015, black people aged 16-24 had a 17.6 percent rate of unemployment, down from the all time high of 34 percent during the worst of the Great Recession in 2011.

But the point he seemed to be making was something else: that the president had put the well-being of Latino immigrant youth before that of African Americans and that if it were anyone but Barack Obama, African Americans would be angry about it. That's a typical right-wing whine, unsurprising coming a man who claims he will be better for African Americans than the first black president --  and he'll do it by punishing all those Latinos that president allegedly prefers.

For the most part, there has not been a history of antagonism between Latinos and blacks as regards immigration. There have been some prominent African American politicians of the past, like the late Congresswoman Barbara Jordan, who believed that immigration brought down wages which helped keep African Americans in poverty. This is currently being exploited by anti-immigrant groups using her words in advertisements to make the case for closing the borders.

But most economists do not believe that wages are suppressed by undocumented workers, and institutions which used to be hostile to immigration, like unions, have changed their position on the issue. In fact, the immigration debate is much more focused these days on culture, citizenship, "welfare" and the abstract notion of sovereignty than on wages. African American leaders are squarely with the Democratic mainstream position in favor of comprehensive immigration reform.

Pitting Latinos against African Americans remains a tactic on the anti-immigrant far right, however, where nativist groups like VDARE fatuously declare their deep concern for the well-being of African Americans while running articles like this one from John Derbyshire, in which he complains about Beyoncé's "anti-white thunder thighs." Their insincerity toward the problems of the African American community couldn't be any clearer.

No one can say that Donald Trump is not very tuned in to the anti-immigration right. And these comments juxtaposing the DREAMers and African Americans did not happen in a vacuum. As a matter of fact, Trump has released a new ad that comes at this theme from another angle:

Breitbart News wrote about the ad when it was first released explaining that Trump is trying to attract African American votes in South Carolina. And according to Buzzfeed, Trump and some of his racist friends actually think they have a chance to woo African American voters with this appeal:

As the possibility of Trump winning the nomination sinks in, some Republicans have been floating this theory: that Trump could put black voters like Jackson and Cook in play for Republicans in the general election.

This theory — which is mostly being pushed by a few pollsters, fringe black operatives, Trump sympathizers, and Trump himself — is rooted in the idea that black voters aren’t as excited about either of the leading Democratic contenders, and that Trump’s high name ID and life story could win over a higher percentage of black voters than GOP nominees have been able to secure in recent presidential elections.

One problem: Public polling does not currently back this theory up, when it comes to Trump himself or the policies he’s proposed.

Still, the theory hasn’t died — even among establishment Republicans in Washington. They won’t publicly talk about it, but the idea has come up in private discussions on Capitol Hill, half a dozen sources say.

It's far fetched to believe that African Americans are going to vote for Trump just because he's famous. They are loyal Democrats who are not going to be swayed by the obvious manipulation in that ad. They surely feel sorry for Mr Shaw's loss but to people who are often subject to collective punishment for the acts of a few, this argument isn't likely to be persuasive.

Trump is deluded enough to think African Americans will vote for him, but he is more likely doing what conservative always do -- seeking to prove they aren't racist even as they propose racist policies.

Which is especially rich, considering that Trump has a long history of racism, of a very ugly sort. Here's just one example:

After the brutal rape of a white jogger in Central Park in May 1989 received widespread media attention, and amid a rise in crime rates nationwide, Trump took out a full-age ad in four New York City newspapers with the title “BRING BACK THE DEATH PENALTY! BRING BACK THE POLICE!” He did not specifically reference the Central Park jogger attack in the ad, but its timing made the connection inescapable.

"Mayor [Ed] Koch has stated that hate and rancor should be removed from our hearts. I do not think so. I want to hate these muggers and murderers. They should be forced to suffer and, when they kill, should be executed for their crimes. They must serve as examples so that others will think long and hard before committing a crime or an act of violence. Yes, Mayor Koch, I want to hate these murderers and I always will. I am not looking to psychoanalyze them or understand them, I am looking to punish them. If the punishment is strong, the attacks on innocent people will stop. I recently watched a newscast trying to explain “the anger in these young men.” I no longer want to understand their anger. I want them to understand our anger. I want them to be afraid.

"How can our great society tolerate the continued brutalization of its citizens by crazed misfits? Criminals must be told that their CIVIL LIBERTIES END WHEN AN ATTACK ON OUR SAFETY BEGINS!"

Trump was referring to five young black and Hispanic males who were in custody at the time. They were all tried, convicted and sentenced to multiple years in prison -- and they were all innocent of the crime. Years later, they were exonerated. They sued the city and were awarded $40 million dollars.

Here's what Trump had to say about that last year:

Forty million dollars is a lot of money for the taxpayers of New York to pay when we are already the highest taxed city and state in the country. The recipients must be laughing out loud at the stupidity of the city.

Speak to the detectives on the case and try listening to the facts. These young men do not exactly have the pasts of angels.

All these years later and he has not changed one bit. Indeed, "your civil liberties end where our safety begins," could be his campaign slogan. He has no moral compass and cares nothing American constitutional principles. Latinos and African Americans will have no problem recognizing him for what he is and rejecting his attempt to use them for his own ends. They know his type very, very well.