Kanye's debt, Kim's money, their marriage: Why separate bank accounts don't tell us anything about a relationship's health

West is half of a high-profile, high-earning couple—he's also, according to his tweets, $53 million in debt 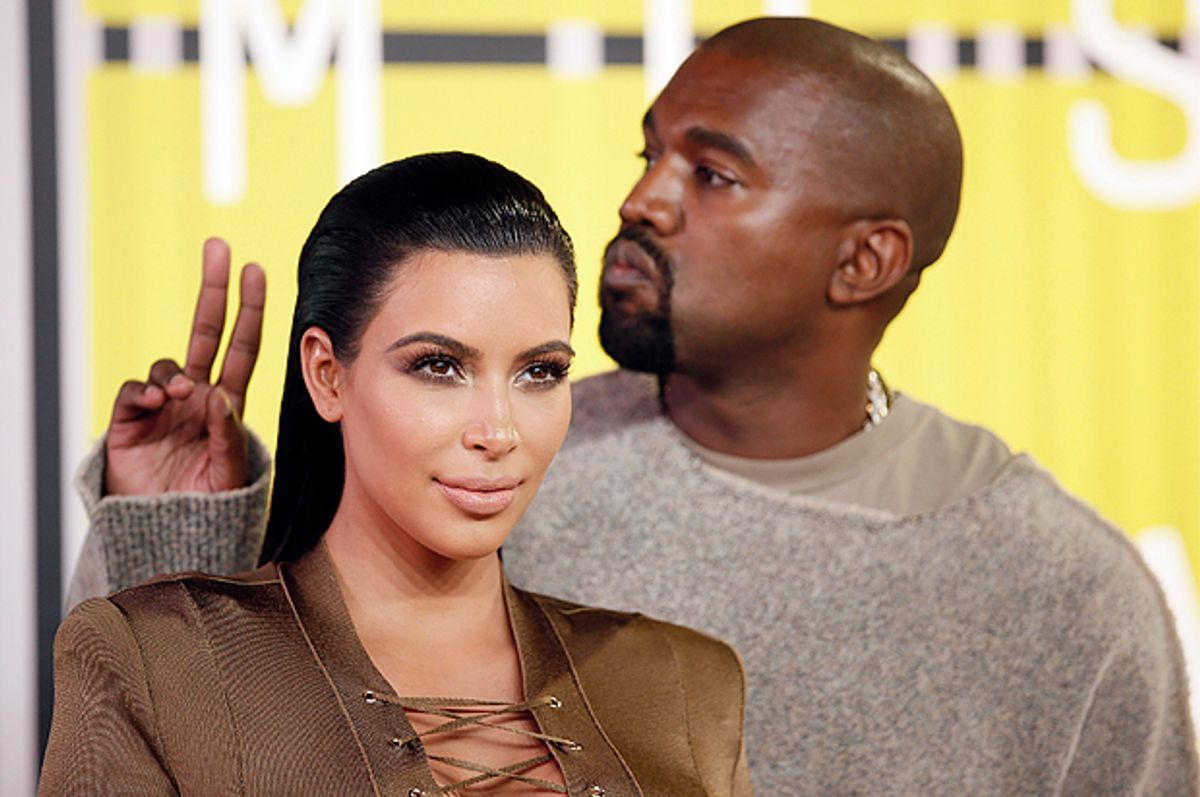 Kim Kardashian West doesn't always get the credit she deserves for being a shrewd businesswoman, but I’d wager that of her and rapper husband Kanye West, she’s the one who pushed for them to keep their finances separate. A source told People that “They keep their accounts basically separate," and added that West will “talk about 'my money' and 'her money,’” news that has already spawned divorce rumors.

I have no idea whether the couple is on the rocks, but dismissing their longevity based on their refusal to merge their money is short-sighted. Considering that Kim earned $52.5 million in 2015 (up from $28 million in 2014), according to Forbes, making her the 33rd highest paid celebrity in the world, I would imagine that she didn’t want to do anything that might risk her losing even a penny of her fortune. This figure is very close to another one being bandied about this week, as West took to Twitter to lament being $53 million in debt and asking the likes of Facebook CEO Mark Zuckerberg to invest a billion dollars.

West may have had a hit with "Gold Digger," but a woman as successful as Kim probably can't be accused of that, even though the site TheRichest.com estimated the musician and fashion designer's 2015 net worth at $147 million. It’s more likely that Kardashian West, who’s been married three times, wanted to make sure that her assets were protected. According to Radar, which reported that the terms of their prenuptial agreement state that the reality TV star would get $1 million for every year she’s married to West, the prenup was at her behest. “Kanye didn’t even think the couple needed a prenup, and was ready to give Kim carte blanche to all of his financial assets,” a source told Radar.

So are there any banking lessons for those of us who aren’t worth millions? Is keeping your finances separate from a partner always a wise move? Not necessarily, according to New York City-based financial therapist Amanda Clayman, in an interview with Salon. “The most important things to consider are your financial goals, both individual and as a couple, and your organizational preferences,” said Clayman.

Clayman said that in her practice, she sees many couples who keep their finances separate in the beginning stages of their relationships, but often they alter this once they have kids or as they get more comfortable in the relationship. She cautioned that income inequality can make a strict separation where each splits everything jointly challenging. “If one person makes significantly more money than the other, the definition of "fair' or ‘equal’ may need to be more about proportional contribution than the same dollar amount,” she said. “It may also bring about differences in what constitutes an appropriate joint expense. If the higher-earning person wants to spend money on meals or travel that is done together, but the lower-earning partner can't afford, it can place stress on the relationship. It complicates how the couple can save for the future, too.”

Beyond the logistics and mathematics, keeping your finances separate can make you feel more in control, because you are more in control. This is about far more than having the safety net of a fuck off fund, but about knowing that your money will stay yours to do with as you so desire. Should your partner suddenly develop a penchant for online gambling, they can’t suddenly raid your account. Plus nobody will feel like their spending habits are under constant scrutiny. As Marian Schembari put it in an essay for Marie Claire, “When I got married, sharing money just didn't make sense. Why would I want my husband to question why I bought those $200 shoes? Why would I want him–love of my life that he is–to be able to spend the money I worked hard for? Or vice versa.”

As for me, while I’m not in as much debt as Kanye West (and doubt I’ll earn anywhere near his $53 million sum in my lifetime), I do have my share of money I owe, which is one of the major reasons my boyfriend and I have, like Schembari, kept our finances separate. I don’t want him to ever have to worry about being saddled by my debt. We keep each other up-to-date on how we’re doing financially, plan joint purchases and expenditures, and generally share money news, and split our bills. We just don’t pool our money and neither has access to the other’s funds.

But even though that system makes perfect sense for many people, it bumps up against deeply held notions of what a true coupledom means. Schembari wrote that while she’s fully confident in how her and her husband split their money, her family isn’t as sold on the idea. “Friends and family never understand why we kept finances separate. They imply that it makes us less of a team.” While I understand looking out for a loved one, ultimately, every couple has to figure out the kind of day-to-day money management system that works for them, and it’s really nobody else’s business how they spend or save their hard-earned dollars.

Others have argued that keeping your money separate is simply an excuse not to fess up to our own financial flaws. Blogger Adam Baker of the blog Man vs. Debt wrote about why he’s avidly against couples having separate finances. “On the surface it can seem like separating accounts is a way to avoid money fights, however I believe many people use this as an excuse to delay working through the real issues behind the fighting.”  He wrote that once he got married, he considered any individual debt joint debt, income earned joint income and bills “our” bills, rather than his or hers.

I’m glad that system works for him and his wife, but I think his arguments against separate finances are a misreading of what “separate finances” means for many people. If separate means “hidden” or “secret,” that’s one thing, but if it just means, “I take care of my money and you take care of yours,” that’s another. Couples with separate finances figure out equitable ways to split their bills, whether it’s taking turns or splitting each down the middle, or have one person cover certain types of expenditures. I’m not sure why “separate” is so looked down upon or distrusted, but speaking from my own experience, I believe my money and my partner’s money are better protected by this system.

Clayman recommends those who aren’t sure how to approach their finances as a couple institute what she calls a "three pots" system, meaning yours, mine, and ours. As she explained it, “the ‘ours’ pot covers joint expenses but each person still gets an area of financial autonomy. Or initiate a trial period, where you agree to re-visit this in a few months to see how it's working or not working. Ultimately, though, if this is something a person is really not comfortable with he or she should try to discuss this honestly and from the heart, no churning ‘facts’ at the other person about how this is just the right way to handle it.”