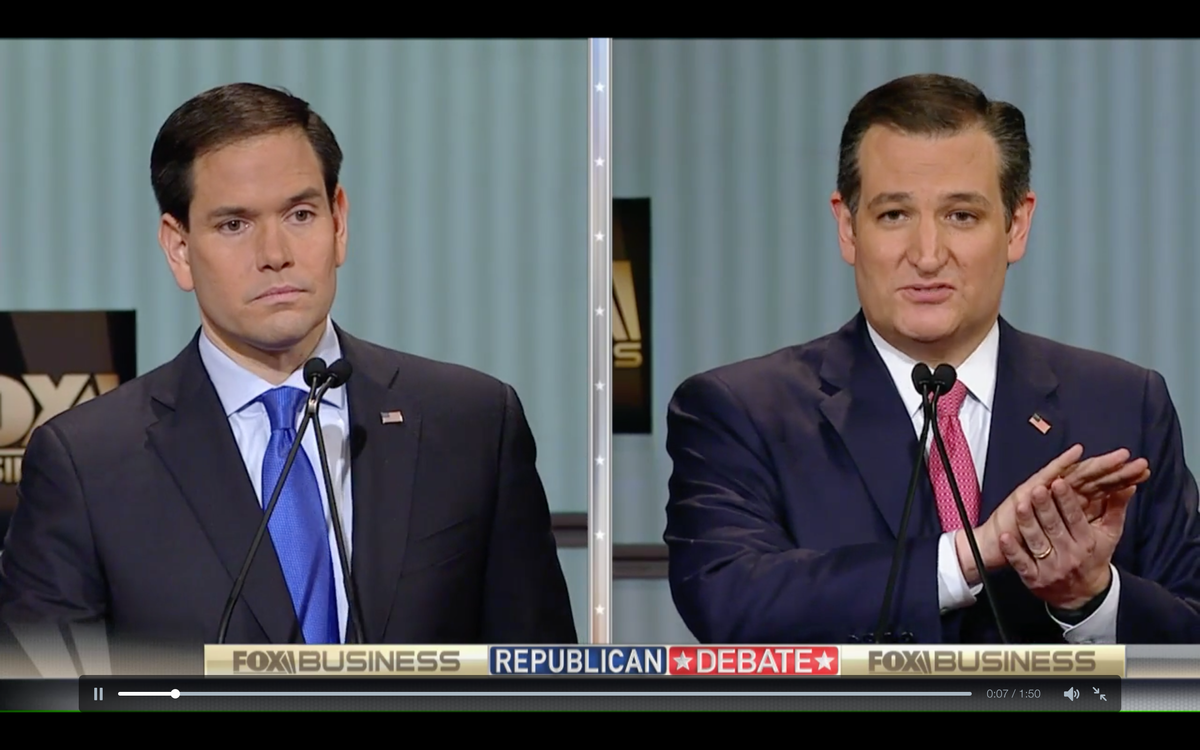 Typically, at this point in a presidential primary cycle, the negative campaigning kicks into high gear as candidates head into the notoriously dirty "First in the South" primary state of South Carolina. However, Donald Trump has been yelling about rapists and calling his rivals idiots for months now, so the campaigns' turn to the Palmetto state merely continues the long tradition of mudslinging that has marked the GOP Civil War of 2016.

“Ted Cruz is a liar," opened an email to supporters blasted out by Marco Rubio's campaign Tuesday night. “First it was lying about Marco on fundamental issues like life and marriage; now Cruz and his supporters’ attempts to slander and distort Marco’s record have reached a new low,” Rubio campaign spokesman Alex Conant wrote. One ad by a pro-Cruz Super Pac was already pulled down this week after a legal review found it misleading in its claim that Rubio supported so-called “sanctuary cities.”

The Rubio campaign is now accusing Cruz's campaign of using “dishonest push-polls” to attack their candidate. According to the Washington Post, some South Carolina Republicans have received phone calls that ask, "Did you know that Marco Rubio and the Gang of Eight are for amnesty” and for allowing Syrian refugees to freely enter the U.S.? The Cruz campaign denies any involvement with robo-calls, but Rubio's camp is still fighting back, releasing a robo-call of their own to “alert” voters in South Carolina.

“These tactics are becoming all too common in this race and indicative of our opponents’ campaigns that are willing to say or do anything to win an election,” Rich Beeson, Rubio’s deputy campaign manager, told the Post. “This is nothing more than a deliberate effort to peddle false information in the hopes of deceiving voters.”

Rubio's reactionary robo-call features top South Carolina surrogate Trey Gowdy, who himself was the center of another campaign tactic the Rubio campaign complains originates from the Cruz campaign.

Gowdy, chairman of the House Benghazi Committee, denounced the Cruz campaign's “underhanded tactic” in a statement released by the Rubio campaign this week, accusing the Cruz campaign of being behind a fake Facebook account that purported to be Gowdy reneging his endorsement of Rubio and switching allegiance to Cruz.

“It’s official, I have changed my mind. My previous endorsement of Marco Rubio was a grave mistake,” the fake post said. “The recent South Carolina debate revealed his total lack of integrity, intellect and foresight . . . To all my Christian and Conservative friends in South Carolina, I hereby formally endorse Ted Cruz.”

“In the last week, we have seen a systematic effort by Senator Cruz and his allies to spread false information and outright lies in the hopes of winning votes by appealing to our lowest common denominator,” Gowdy wrote in response to the fake Facebook account.

“This has been a pattern now with Ted,” Rubio said at a campaign stop in South Carolina on Wednesday, reminding the crowd of the Cruz campaign's behavior the night of the Iowa caucuses when they misleadingly suggested to precinct captains that Ben Carson had dropped out of the race. “He has spent the last two weeks literally just making stuff up,” Rubio remarked.

“I just think it’s very disturbing [that] you can just come and make things up about people and believe no one is going to call you out on it. And it’s now become a pattern, so we have to clarify that we can’t let that stand unchallenged.”

For his part, Cruz is fending off attacks against his own campaign this week as well. Politico reports that Cruz's campaign sent a letter to TV stations across South Carolina demanding that they cease airing an from the conservative super PAC American Future Fund that goes after Cruz's record on immigration from the right.