The vagina and uterus swipes have got to stop: Killer Mike's "uterus" comment about Hillary hurts all women

Saying "a uterus doesn’t qualify you to be" prez calls all women's achievements into question, not just Clinton's 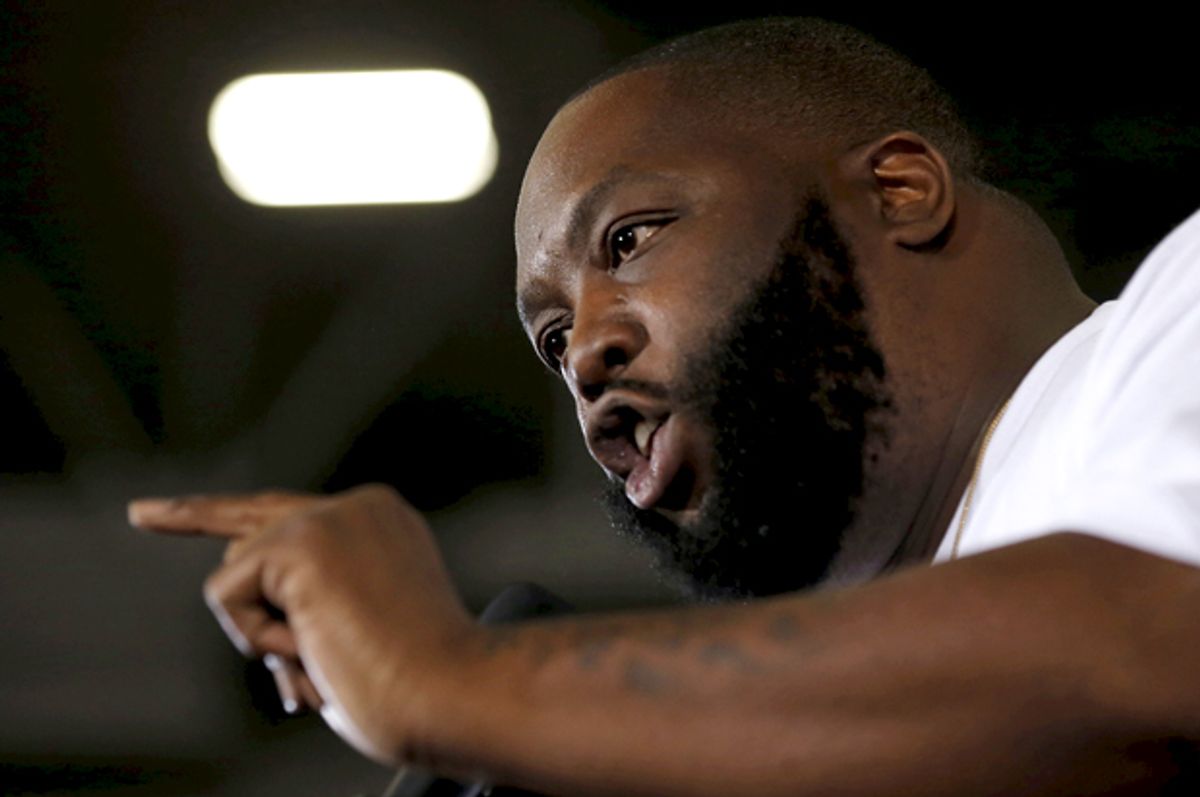 You don't have to like Hillary Clinton, but it's simply and demonstrably untrue that she has never accomplished anything in her life but growing a uterus. This should seem obvious, and yet these body part-obsessed accusations of female unworthiness have become a standard issue Bernie Bro jab on social media. And now the has-a-vagina-but-nothing-else-to-offer claim has been elevated to the actual Bernie Sanders campaign, courtesy of rapper Killer Mike.

At a campaign event for Sanders, Killer Mike made a lengthy speech where he casually argued that "a uterus doesn’t qualify you to be president of the United States." It's something that female Clinton supporters get to hear every day, especially if they dare poke their heads out on Twitter or Facebook, and it continues to be a confirmation of nothing but the sexism of the person spouting this stupid line.

It's really a double-edged sword of sexist cruelty, both reducing Clinton to her gender and insulting the intelligence of the woman on the receiving end of this slur by assuming that she, being some dumb broad, just mechanically sees another lady and goes, "Me vote lady!"

It's such a dumb swipe that it's impossible to believe anyone who levels this accusation could actually mean it. Surely the vagina-accusing masses realize that Clinton supporters do not, for instance, support female politicians like Sarah Palin or Carly Fiorina. The sheer self-refuting stupidity of this insult is no doubt why Sanders himself is careful to avoid saying anything like this, instead making a point that he's fully aware that Clinton is an accomplished politician who has a lot to recommend her besides her gender.

Killer Mike took to social media and rolled out the standard excuses of every Bernie Bro caught saying something dumb and sexist: He hypothetically supports the candidacies of women who are not running for office!* A woman said the same stupid sexist thing, so it's OK! (Except women can be sexist, as evidenced by all the anti-feminist women on TV and in Congress.) It's the Clinton supporters who are sexist, because they are only voting for her because of her gender! Which is, of course, the untrue and sexist accusation that he's trying to backpedal from, suggesting he's just trying to exhaust his critics into giving up. How can they get him to hear them when they're so clearly made of straw?

Look, it's a contested primary, which is a recipe for otherwise smart people getting stupid fast. God knows there have been some dumb gambits from Clinton supporters, as well, especially when you're counting Bill Clinton's non-sequiturs like saying "We are all mixed-race people."

Primary contests start to resemble a drunk couple fighting. People are so eager to find some mean thing to hurt the other side with that they stop considering niceties like "Does this make sense?" or "Is this even true?" And trust me, once it's over, everyone wakes up, sheepish and eager to pretend that it never even happened.

But the vagina and uterus swipes at Clinton have got to stop. Fine, if you want to hurt her, it's petty and childish and illogical, but go ahead, have at it. She's a politician and she can take it. Taking people's uncalled-for vitriol is part of the job.

But the sexism isn't just about hurting Clinton. When you accuse Clinton of having no value outside of a vagina and a uterus, that hurts all women.

When you sneer that Clinton has nothing to offer as a candidate than her uterus or vagina, this is what women hear you saying: That being the valedictorian at Wellesley, a Yale-educated and highly accomplished lawyer, a women's rights activist, a policy expert who helped set the stage for universal health care, a U.S. senator and the secretary of State isn't enough. That even with this long list of accomplishments and a lengthy history of advocating for progressive causes, Clinton still is told she has nothing to offer but her uterus.

If Clinton's remarkable career isn't enough to prove that women can be worth more than a "uterus,"  what chance do the rest of us have?

It was troubling to see that Killer Mike immediately rolled onto to talking about equal wages for women (which Clinton supports), as if he didn't just discredit his own argument. After all, if such an accomplished woman as Clinton is just a uterus, it's really hard to go on and argue that we less-accomplished ladies deserve our paychecks. How is she just a uterus, but your average woman working an office job is something more? It doesn't compute.

Because it is primary season and everyone's brains have fallen right out of their heads, this joke received a lot of whining and dark intimations about the corporate media sellouts on social media. But the point is one that Sanders supporters should consider before they give into that delicious urge to claim that your opponent has no value whatsoever, and to lean on sexist tropes to do so. It is not nothing to have accomplished all Clinton has, especially in a sexist society where women are routinely told we have no value outside of sexual and reproductive functions.

There are a lot of good reasons to support Bernie Sanders. He's a smart politician who is making a persuasive case that he can push the country to the left. While I generally support Clinton myself, I cannot deny that it's cool seeing a self-proclaimed socialist making a credible run for the White House. These arguments can be made without saying demonstrably untrue and sexist things about Clinton.

"I also hope that we all remember," Sanders said during his acceptance speech after winning the New Hampshire primary, "and this is a message not just to our opponents, but to those who support me as well. That we will need to come together in a few months and unite this party, and this nation because the right-wing Republicans we oppose must not be allowed to gain the presidency."

It's a message that people really should take to heart. In a few months, this will be over and the Democrats will have a nominee who will be pretty good, whether it's Clinton or Sanders. It's just not worth causing all this collateral damage by hinting (however unintentionally) that women will never be good enough, no matter what they do, just to score some points that probably won't even turn into real votes at the end of the day.

*Correction: The original article stated that Killer Mike listed Condoleeza Rice. The author misread his tweet to say "Condi Rice", when in fact he wrote "Connie Rice", who is a civil rights activist. Apologies for the mistake.