The Donald's latest verbal assault on Sen. Lindsey Graham shows him — yet again — doing what other GOPers can't 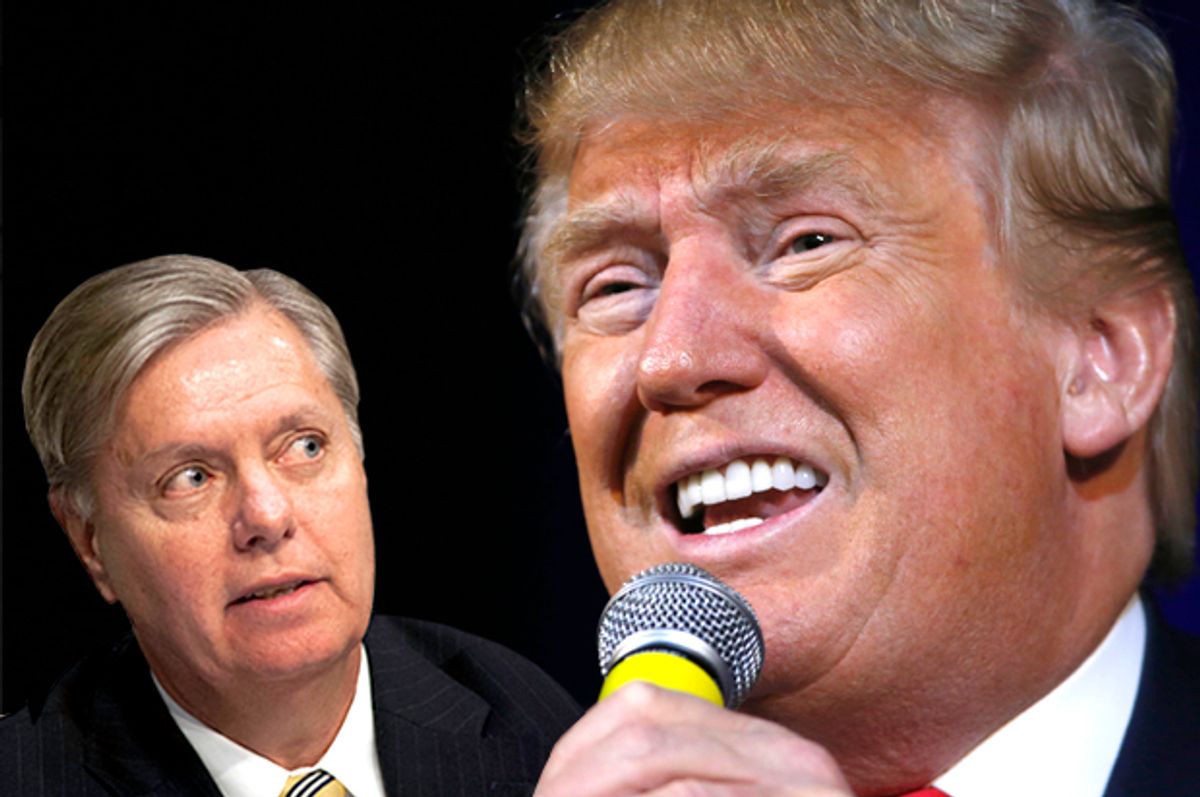 It’s not a secret that Sen. Lindsey Graham and Donald Trump hate one another. From nearly the moment the billionaire real estate mogul entered the race, the South Carolina senator has been telling anyone who’ll listen that Trump would be a disastrous presidential nominee. Trump, meanwhile, countered by sharing the number for Graham’s cellphone. (Remember when that seemed outrageous?)

It’s not news, then, when Trump lets loose a tidal wave of bile and sends it in Graham’s direction, as he did Wednesday during a Q&A in the Palmetto State. It is, however, still amusing — granted, in a guilty pleasure kind of way — so I’ll share it all the same:

"Lindsey Graham — you have a guy, he's one of the dumbest human beings I've ever seen. He runs against me for president, starts out at 6 percent and he starts hitting me," Trump said unprompted during a question-and-answer session in South Carolina.

"He ends up at zero [percent]. Here's a guy running for the presidency, he's at zero. He leaves in disgrace, in my opinion, I think he's disgraced. ... I don't think he could run for dogcatcher in this state and win."

As I said, pretty standard fare from Trump. Although I will cop to finding his calling Graham “one of the dumbest human beings I’ve ever seen” a little funny. (What can I say? I’m a sucker for hyperbole.)

What is news, though, is a lesser-noticed portion of Trump’s rant, the only part that could be regarded as having to do with policy substance — if we’re feeling generous. It was Trump’s attack on Graham’s knee-jerk hawkishness on issues of foreign policy. And it was interesting not only because Trump is at least somewhat correct, but also because it fits with a larger trend that may be developing in South Carolina.

Namely, that Trump may have figured out how to sell a (relatively) realist and non-interventionist foreign policy to GOP voters. The trick, it appears, is to advocate (relative) restraint in terms of policy, but to do so while being second to no one when it comes to saber-rattling and thumping your chest. Speak loudly; forget about the stick.

Here’s what Trump said on Wednesday: “And [Graham’s] thinking? … He knows about the military? I could push him over with a little thimble — boom. I hear his theory for the [Iraq] war; you’ll be in there forever. You’ll end up starting World War III with a guy like that.” Not exactly Chomsky, I admit. But Trump sounds a whole lot more like Sen. Rand Paul than Sen. Tom Cotton.

If you’re a Republican politician, you’re not supposed to be able to talk this way and still win. You can talk this way, to be sure; Ron Paul did it in 2008 and 2012 with a degree of success. But you’re not going to win. And you’re certainly not going to win in South Carolina, where the military looms even larger than it does in most conservative states. And yet, barring an unprecedented explosion of #marcomentum, Trump is about to do just that.