Donald Trump takes on the pope: How are we to interpret Pope Francis' comments on border walls and Christianity?

Did the pope question Trump's faith? Or did he slam every wall-building Republican? Dear god, what's going on here? 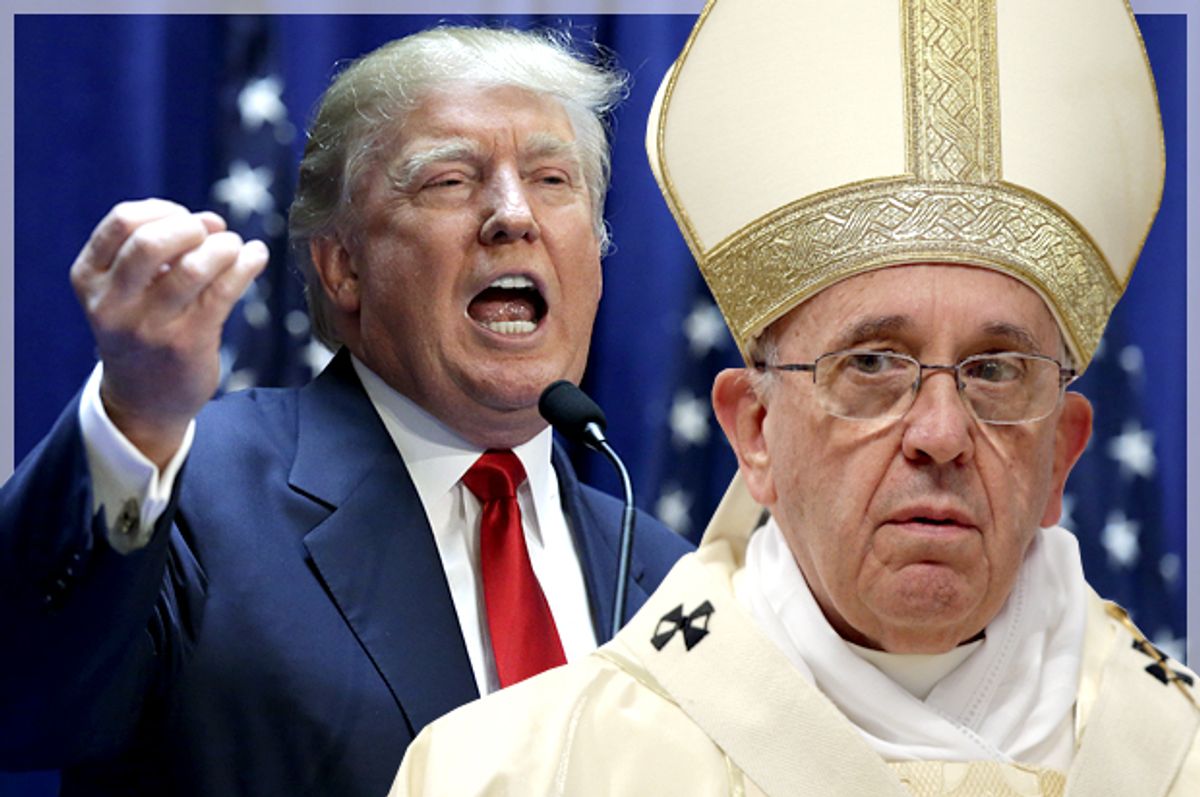 I suppose it was inevitable that something like this would happen. Here we are, just a couple of days from the South Carolina primary, and front-running Republican presidential candidate Donald Trump is locked in an epic battle with the pope. He’s grown tired of the puny political adversaries who can hardly dent his lead in the polls and is itching for a larger fight. Ted Cruz? He’s a distraction. Marco Rubio? Hardly worth a press release. Trump wants to crush the Vatican beneath his very expensive, very classy wingtips. He wants to scale the mountain, reach high towards the heavens, and extend a stubby middle finger at God.

Now, to be clear, Pope Francis kind of brought this on himself. While on a visit to Mexico, the pope was asked about Trump’s draconian immigration proposals – mass deportations, removal of American citizens who are children of undocumented immigrants, and the construction of a massive border wall. The Pope responded in a very pope-ish fashion. “A person who thinks only about building walls, wherever they may be, and not building bridges, is not Christian,” the pontiff said.

There are a few ways to interpret this response. He was speaking vaguely and in metaphors, and so it’s possible – likely, even – that he was simply expanding the scope of the question to reinforce a broader message of Christian morality. But, then again, he was asked specifically about Trump, and his response was about “a person” who wants to build a wall and thus “is not Christian.” Whatever the case, Trump does not deal in subtlety and nuance. He viewed the comments as a direct attack on his faith and responded by calling the pope “disgraceful” and claiming that the Vatican will be destroyed by terrorists unless he’s elected president. The tone of the media coverage also fostered the Pope-versus-Trump interpretation, casting the pope’s comments as an implied rebuke of Trump’s Christianity.

If that’s the interpretation we’re going with, though, I’m not entirely sure why the pope’s critique is being viewed as purely about Trump. Yes, it came in response to a question about Trump’s plan to build a border wall, but pretty much every one of Trump’s rivals for the Republican nomination also wants to throw up some sort of wall-like structure on our frontier with Mexico. At the Reagan Library debate last September, Marco Rubio said the first step towards immigration reform is “we must secure our border, the physical border, with – with a wall, absolutely.” Ted Cruz says all the time that “we’re going to build a wall” and jokes that he’s going to get Trump to build it for him. Ben Carson thinks “the border wall is a good start” but is also open to other security measures, like drone strikes along the border.

So there’s lots of enthusiasm for wall-building on the Republican side. It’s basically been the conservative position on immigration since forever. So if we’re going to go with the “Pope questioned Trump’s Christianity” interpretation, then we have to expand that out to pretty much every Christian in the Republican Party, which is a lot of people. That’s why you’re seeing Republicans like Rubio and Jeb Bush – Catholics both – pushing back against the pope’s statement, even though it’s being widely interpreted as an attack on their chief rival for the GOP nomination. The way they see it, the pope didn’t attack Trump, he attacked a key policy platform of the party.

But, given the vagueness and sweeping nature of the pope’s comments, one could also expand it to encompass pretty much every politician in Congress. The immigration reform bill that passed the Senate in 2013 called for 700 miles of additional fencing to be constructed along the border as a prerequisite for opening up pathways to permanent residency for undocumented immigrants. Every Democrat in the Senate voted for that bill, and it was strongly supported by President Obama. Does that qualify as un-Christian wall-building, or does it get a pass because it also called for some bridge-building with the undocumented immigrant community?

I don’t know. Perhaps we shouldn’t be interpreting these things so literally. Whatever the case, all of us – maybe even His Holiness, too – can agree that Donald Trump, Christian or not, is an asshole.