"Hookers for Hillary" doesn't speak for all sex workers: "Presidential politics is not where we will find our liberation" 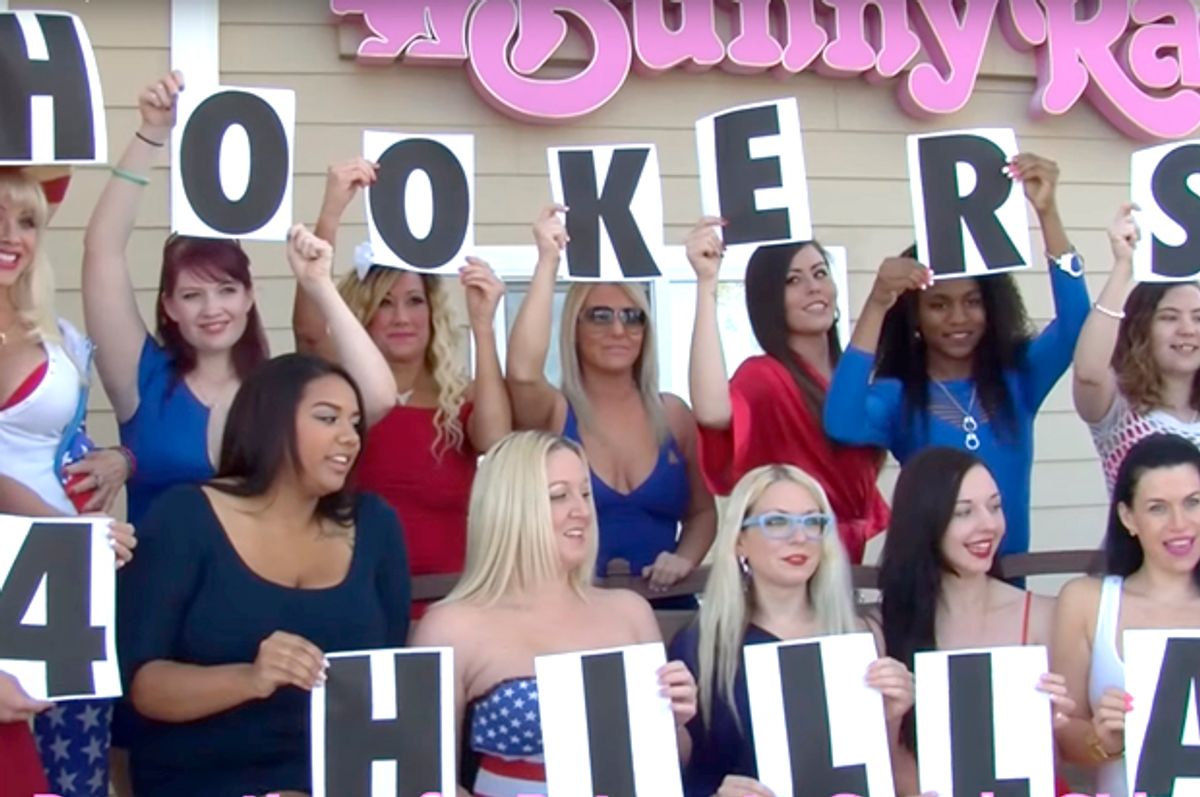 A still from the video "Hookers for Hillary!" showing the sex workers of the Bunny Ranch legal brothel in Carson City, Nevada. (YouTube/Dennis Hof)
--

Sex workers may not be the target audience of the Democratic presidential candidates, but they are playing a role in this election season and making their voices heard, both with splashy media campaigns and behind the scenes.

The organization Hookers for Hillary launched its appropriately splashy red, white and blue website last year to campaign for Hillary Clinton on a four-point platform focused on “protecting health care reform, foreign policy experience, support for agencies that protect public’s health” and “prevention of a return to supply side economics.”

Now the group, organized by Dennis Hof, the owner of Nevada legal brothel the Moonlite Bunny Ranch in Carson City, Nevada, is back in the news this week with a major profile in the Guardian exploring why some of these women are campaigning so ardently for Hillary. Brothel worker Hollywood told the Guardian, “Hopefully maybe people who were not really [political] followers before kind of looked into it and went, ‘Wow, this is big! What’s going on?’” One Hookers for Hillary member, Caressa Kisses, told the Huffington Post, “If you tell me you’re caucusing or voting for Hillary, I will give you a free lunch or 30 extra minutes to use however you like.”

However, other sex workers were skeptical of their motives, finding them self-serving rather than truly dedicated to social change. Anna Saini, an advisory board member of Best Practices Policy Project, which works to “protect the rights of people who engage in commercial sex,” said that Hookers for Hillary in no way speaks for the sex work community. She told Salon that the group “sounds like a mouthpiece for the Ranch owner, Dennis Hof, who would support Clinton's campaign since a Sanders presidency has the potential to lift up his employees into a position where he would no longer be empowered to exploit their labor by taking approximately half of their earnings.”

Saini went so far as to argue, “I'm certain Hillary Clinton has driven more people into the sex industry than any pimp or trafficker. The policies that Clinton proactively supported—pushing people out of public housing, dismantling welfare, discriminating against formerly incarcerated people—have produced economic circumstances that force people into survival sex.” Saini said that while Sanders is problematic, citing his views on reparations, “he's the candidate most committed to economic justice, an issue of vital importance to the sex work community, particularly survival sex workers who are economically coerced into sex work as a means to exist.”

In fact, not all Bunny Ranch workers are pro-Clinton. Ashlen Reed, a legal escort at the Bunny Ranch, told Salon via email, “As someone who leans toward the left and has been involved in activism work for years, specifically related to anti-racist feminism, prisoners' justice, and sex workers' rights, I'm feeling the Bern. I don't think Hillary Clinton has any intention of helping us. It isn't that she's an evil lizard person, but that she lacks the knowledge of what it means to be truly marginalized and holds too much faith in capitalism as a place of change.“

Reed articulated her reasons for supporting the Vermont senator. “Bernie Sanders hasn't spoken on sex workers rights as far as I know and he may never. I do know, however, that he doesn't refer to ‘deviants’ (people of color) as ‘super predators,’ and his plans for accessible college education are more promising in serving as an ‘anti trafficking’ measure than the surveillance and criminalization of sex workers, who have reported police raids to do more harm than good. If you want to end ‘trafficking,’ you need to end room for capitalist exploitation, a gendered and racialized phenomenon. Being a nice white lady with good intentions doesn't help me as a sex worker, a woman, or anything else.” Reed admitted that “while I'm terrified of another Clinton presidency, I'm nonetheless proud of my bunny sisters for the work they're doing on Hookers for Hillary.”

Caty Simon, a longtime escort and co-editor of the by-and-for sex workers blog Tits and Sass, told Salon in an interview that she’s “unenthusiastic” about both major Democratic candidates, but said, “I suppose that I’ll have to vote for Sanders because his policies are the best. I don’t see how any sex worker can truly support Hillary when in the early '90s the Clintons destroyed welfare as we know it and eroded social services in this country and supported policies which allowed for a lot more federal lockups of all sorts of people.”

Simon was dismayed by the Hookers for Hillary campaign, telling Salon, “I have all the respect in the world for Nevada brothel workers, but when it comes down to it, they represent a very privileged section of the industry so I think it’s easier for them to ignore the fact that Hillary doesn’t speak for the marginalized and in fact has actually worked against them throughout her career.”

As for why there aren’t more sex worker rights organizations endorsing candidates, several sources offered reasons why sex workers might be more focused on local rather than national politics. According to Simon, it’s largely “because the oppression of sex workers in terms of the criminalization of prostitution happens on a state level. Where sex workers should be most politically invested is in local and state campaigns and that’s where I think most of our activism rightly is.”

Simon cited two successful local campaigns where sex work activism made a difference: the New York campaign to end the use of condoms as evidence of prostitution, and “the successful Louisiana campaign against registering sex workers for ‘crimes against nature’ and putting them on sex offender registry lists.”

Explaining the specifics of how a law unfairly targets sex workers and endangers public health is easier, according to Simon, than dismantling long-held beliefs that sex work itself is problematic. “I think that when you try to butt heads with the taboo against sex work head on, we don’t do so well, but when we try to minimize the harm that happens to our community, we can make a case,” Simon explained.

Of both Sanders and Clinton, Simon said, “it’s not like any of them would ever support us back. The very idea of prostitution is still anathema to a political campaign.” As proof, Simon cited David Vitter’s loss to John Bel Edwards in November in his bid for governor over reports that his phone number was found in the records of a Washington, D.C., madam. The accusation was explicitly used against Vitter in an Edwards campaign ad, whose narrator stated, “David Vitter chose prostitutes over patriots. Now, the choice is yours.” Similarly, Saini argued, “No sex worker organization worth their salt is making presidential endorsements. The fact is that no presidential candidate is standing up for the rights of sex workers or speaking on our issues. Presidential politics is not where we will find our liberation.”

Sex Worker Outreach Project (SWOP), a 501(c)3 charity, is legally prohibited from endorsing candidates. SWOP’s communication director, Katherine Koster, told Salon that “sex worker organizations don’t frequently form political action groups to support candidates for political office, but they do lobby elected officials regarding introducing and supporting bills. I don’t think sex workers' issues have gained mainstream solidarity or interest based in a real way yet so I don’t think lobbying for a specific candidate is going to be possible.”

They also don’t necessarily agree on the issues. Both Simon and Saini questioned one of Hookers for Hillary’s key points on their website, where they state, “Nevada’s mandatory testing of legal prostitutes for sexually transmitted diseases is a successful example of effective government regulation. While Republican candidates have questioned the need for agencies like Health and Human Services (HHS) & the Food And Drug Administration (FDA), the Bunnies applaud Hillary’s recognition of the fact that responsible government oversight is a key to protecting the public’s health from widespread disease.” Saini called this aspect of their campaign “particularly appalling,” since it’s “an oppressive policy that is universally opposed by sex worker activists.”

Siouxsie Q, a San Francisco-based sex worker and author of the San Francisco Weekly column “The Whore Next Door,” told Salon she’s undecided as to whom to support in the upcoming election, though she’s been active on the issue of healthcare, organizing a “Healthy Ho’s party” in 2013 to encourage fellow sex workers to sign up for Obamacare. Of the Hookers for Hillary campaign, she said that while she disagrees with their endorsement of the Nevada legal brothel system because “I do not believe it is a legalization model that has sex workers' best interest in mind,” it’s still “great to see sex workers engaging in the political arena.”

Those looking for a political candidate running on a platform specifically focused on sex worker rights may have to wait a few years, but at least one sex worker is determined to make that a reality. Siouxsie Q says she’s “always been incredibly politically minded.” She started her podcast The Whorecast in direct response to 2012 state ballot initiative Proposition 35, the Californians Against Sexual Exploitation Act, because of its overly broad definition of sex trafficking, but she has bigger political goals in mind. “I firmly believe that sex workers deserve the same rights and protections as every other American, and that sex work has been my path to the American dream,” said Siouxsie Q. “I don't hear a lot of politicians, especially presidential candidates, addressing issues of my industry. So I hope someday to run for office myself. Maybe not president, but the voices of sex workers need to be a part of the political sphere, and Hillary has often said that she thinks every woman should run for office at some point. I plan to follow her advice someday.”