She's compared Muslims to Nazis, and will soon receive an award from an Israeli government-funded propaganda group 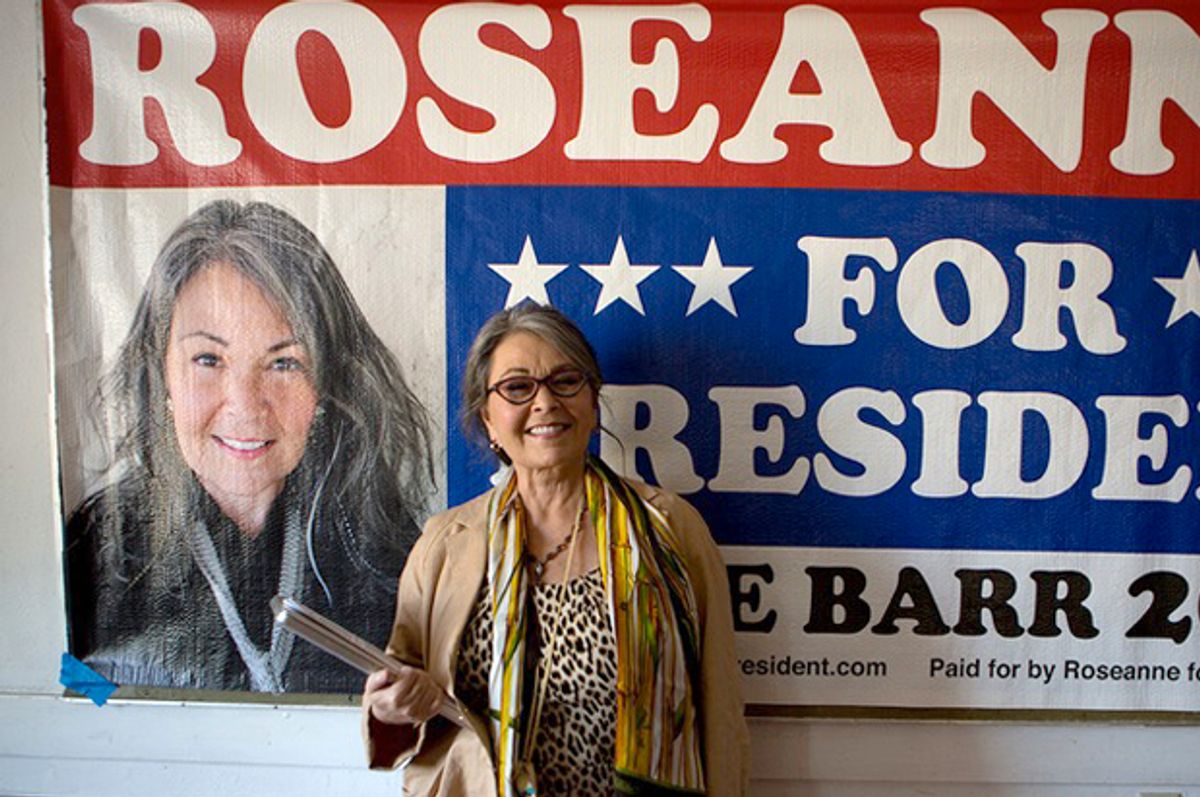 When Roseanne Barr performed her first gig on the Johnny Carson Show in 1985, America was electrified. They’d never seen anything like her on television. A smirking, profane, suburban housewife trampling middle-class values with glee, she was the id, the Domestic Goddess turned Avenger. She said things women couldn’t say on stage. She delved into the nether recesses and spoke barely understood truths about the absurdity and unfairness of domestic drudgery.

She parlayed her standup comedy into her own network TV show, Roseanne, which debuted in 1988. It featured the Connors, a working-class family from the Heartland. She put together an astonishing ensemble of actors like John Goodman and Laurie Metcalf, who went on to become two of the better actors of their generation. Not since "The Honeymooners" decades earlier had American TV comedy offered such a fulsome celebration of working American families. For two years, "Roseanne" was the most popular show on American television. TV Guide has ranked the show, "one of the greatest of all time."

But unlike comedians like Ray Romano or Will Smith, who followed the same route and parlayed their TV shows into successful acting careers, Roseanne’s career sputtered. There were the failed marriages to Tom Arnold, the outrageous stunts like mangling the "Star Spangled Banner" before a Major League baseball game. Then came her dabbling in Kabbalah, her embrace of wild conspiracy theories like the New World Order and her conversion (according to her) to observant Jew.

Roseanne went from tapping into the zeitgeist to self-parody in a matter of years. Instead of laughing with us, Roseanne now hates a good portion us. Today, Roseanne inhabits the seamy recesses of the pro-Israel Twittersphere, raging against anyone who doesn’t conform to her Likudist, anti-Muslim line, branding them “Nazis” and sometimes fantasizing about their deaths. Her allies are a collection of anonymous racists and professional pro-Israel propagandists, almost exclusively of the right-wing variety. And while she somehow maintains a gig at NBC, she seems to be heading toward the depressing end of a sad downhill slide.

The Israel-advocacy group, StandWithUs (SWU), plans to host a fundraising galawith Roseanne Barr on February 27 at Temple Beth Abraham in Oakland, Calif. The comedian, who has undergone a conversion from being anti-Zionist as recently as 2012, when she ran for president, is now a staunch supporter of the Likudist Israeli government. StandWithUs is one of the pro-Israel lobby’s most aggressive promoters of Israel’s agenda in this country, and is directly funded by the Israeli government.

Last year, the Israeli government awarded SWU a $250,000 contract to create a war room in its Jerusalem office to train students from the U.S. and the UK in mounting effective propaganda efforts during times of emergency, which SWU defined as periods when Israel is invading Gaza and the country is under specially harsh attack in the international community. Since organizations that receive direct funding from foreign governments must register under U.S. law as foreign agents, SWU by rights should be so registered under the Foreign Agents Registration Act. The Obama administration, however, has been reluctant to take on Israel lobby groups and pro-settler charities when they violate our laws and tax code.

“Roseanne Barr has a long history of voicing whatever thought comes to her mind. Her views are controversial, to be sure, and TBA understands the risk of having her speak at our shul. We hope and trust that most people know what they are getting into when they decide to see her speak."

SWU has joined other pro-Israel groups and even university presidents in decrying the “lack of civility” on college campuses. This is, in fact, a code for the rise of “anti-Israel” activism, which they claim threatens Jewish students by making them feel “unsafe” at school. The pro-Israel NGO seems not to have the same sensitivity to the insults Barr makes against Israel’s critics.

Clinging to Relevance at NBC

Barr’s most prominent professional gig currently is as a judge on NBC’s hit-show,Last Comic Standing. During her TV appearances she exhibits none of the mercurial behavior and scatological insults that grace her Twitter feed. She apparently understands quite well where boundaries are in her public persona. But when it comes to social media, she flings off the mask and exposes her hateful, misanthropic personality.

Oddly, as recently as a few years ago she was known for her anti-Zionist views. And even then, she alternated between impassioned pleas for peace and tolerance and lewd, unfunny displays. (Attempts to reach the producers of "Last Comic Standing" and NBC-TV for comment were unsuccessful.)

In 2009, the Jerusalem Post quoted Barr as calling Israel a “Nazi state.” On Kathleen Wells' radio show in 2011, shecalled Israel a “brutal and undemocratic theocracy…which has the world's fourth largest army.” In the same interview, she decried the 2009 Israeli invasion, Operation Cast Lead, as “terrible crimes against humanity” that made her “weep and sweat at night.”

Barr went on to denounce Zionism:

“A Jew is required to correct his thinking and transform the world for the better, but Zionism has changed every single corner of Judaism now…What are the Zionists fighting for? Land? For what? Strip malls and movie theaters and tract housing?”

She praised the courage of Rachel Corrie, who died defending Palestinian homes in Gaza,  and she hailed the Gaza flotilla that broke the Israeli blockade of the Palestinian enclave.

That same year, Roseanne volunteered for an inexplicably offensive photo shoot/article for Heeb Magazine titled, That Oven Feelin’, which featured her dressed as Adolf Hitler with moustache and Nazi armband. Pictures from the session show her eating burned “Jew cookies” fresh from the oven. Though both she and the magazine initially defended the tasteless stunt, the article no longer appears on the Heeb site.

Charlie Chaplin showed, in his controversial masterpiece The Great Dictator, that the subject of Hitler and Nazism was a rich target for satire. But his portrayal in that film was acute and penetrating, and skewered Hitler in a thought-provoking way. Such sardonic humor seems to be missing from Barr’s photo shoot, which did little more than defile the memory of the victims of the Holocaust.

In 2013, she outdid herself, promoting a jazz concert by the anti-Semitic, Holocaust-denying ex-Israeli Gilad Atzmon. Atzmon has said that the greatest historical tragedy to afflict the Jewish people was “not at all an historical narrative.” When criticized, Barr called the claims against Atzmon “lying bullshit.”

Just over a year later, Roseanne underwent another stunning transformation as inexplicable as her last. She converted to extreme Likudism, adopting the anti-Muslim, anti-Palestinian tendencies that go with it. She now calls Israel’s critics, Nazis. Noted BDS activist and Jewish Israeli Ronnie Barkan was a “Nazi,” according to Roseanne, and so was BDS itself. Supporters of Palestinian rights were “Nazis helpers,” implying that Palestinians themselves are the real Nazis.

Within the past few days, Barr retweeted this graphic image posted by an anonymous neo-fascist account likening the religion of Islam to Nazism:

Perhaps her most infamous and outrageous public statement came after the UC Davis student government voted to endorse BDS.  She posted to her social media account, “I hope all the jews leave UC Davis & it then it gets nuked.” After deleting that tweet, she followed with, “Nuke all UC David Jew-Haters.” She falsely accused Davis students supporting BDS of receiving “terror funding” from King Salman of Saudi Arabia.

Why Is a Jewish Sanctuary Hosting Roseanne?

Those in the Jewish community bringing Barr to Temple Beth Abraham should consider this question: if it’s unacceptable to equate Israel with Nazism, shouldn’t it be unacceptable to link Islam with Nazism? Or is Israel purer or more worthy than Islam?

Presumably, UC Berkeley didn’t much like the idea of hosting an event for someone who had just called for dropping a nuclear bomb on another UC campus. The JCRC explained that it canceled not because it disagreed with anything Barr said at UC Davis, but because it feared her views would incite hatred against Jewish college students: “Roseanne’s remarks garnered a lot of attention from Israel’s detractors, and that’s really counter to our efforts to make sure Jewish students stay safe on campus.”

The Jewish agency, which lobbies on behalf of Israel in the American Jewish community, has never distanced itself from Barr's views.

Barr has also weighed in on other U.S. foreign policy issues close to the hearts of pro-Israel activists. In one instance, she said that “if Israel doesn’t nuke Iran then nothing makes sense.”

Compare this with what Barr told Kathleen Wells in 2011: “Is Israel going to attack Iran now? Israel cannot survive a war with Iran. This terrible programming is incorrect. It is lemming programming. Evangelicals are pushing for Armageddon, the final solution to the Jewish problem. Wake up America! Wake up Israel! Wake up world!”

The comedian is an equal opportunity abuser. When the family owning the Chic-Fil-A chain donated funds to oppose gay marriage, she tweeted: “anyone who eats S*** Fil-A deserves to get the cancer that is sure to come from eating antibiotic filled tortured chickens 4Christ." Later she added, “off to grab a s*** fil-A sandwich on my way to worshipping Christ, supporting Aipac and war in Iran.”

By her own admission, Roseanne has sometimes had a tenuous connection with reality. Shetold Oprah Winfrey: “I was prescribed numerous psychiatric drugs. Incredible mixtures of psychiatric drugs to deal with the fact that I had, and still in some ways, have and always will have some mental illness. And the drugs and the combination of drugs that I was given, which were some strong, strong drugs, I totally lost touch with reality in a big, big way.”

“Roseanne is someone who’s left a profound and indelible mark on the entertainment business, and on generations of women in it. Watching her now devolve so profoundly, seemingly unable or unwilling to address the mental issues she’s acknowledged in the past, is nothing short of tragic. It’s the sight of a woman who’s achieved so much in her life, who has been so fiercely unique, reduced now to just another one of the millions of paranoid conspiracy theorists on the Internet.”

Think of Roseanne’s current state as a car wreck. When you drive by you feel guilty for looking at someone else’s pain and suffering.  But then an unethical lawyer stops and leaves his card with the victim, trolling for business. That, in effect is what StandWithUs and Temple Beth Abraham are guilty of: They’re exploiting a troubled human without concern for her welfare, and in doing so, they have exposed how their own narrow, sectarian priorities trump basic values of respect and dignity.