The secret to a liberal Supreme Court: Why progressives need to start thinking seriously about Scalia's replacement

The right spent decades remaking the judiciary. For the first time in a generation, the left could do the same 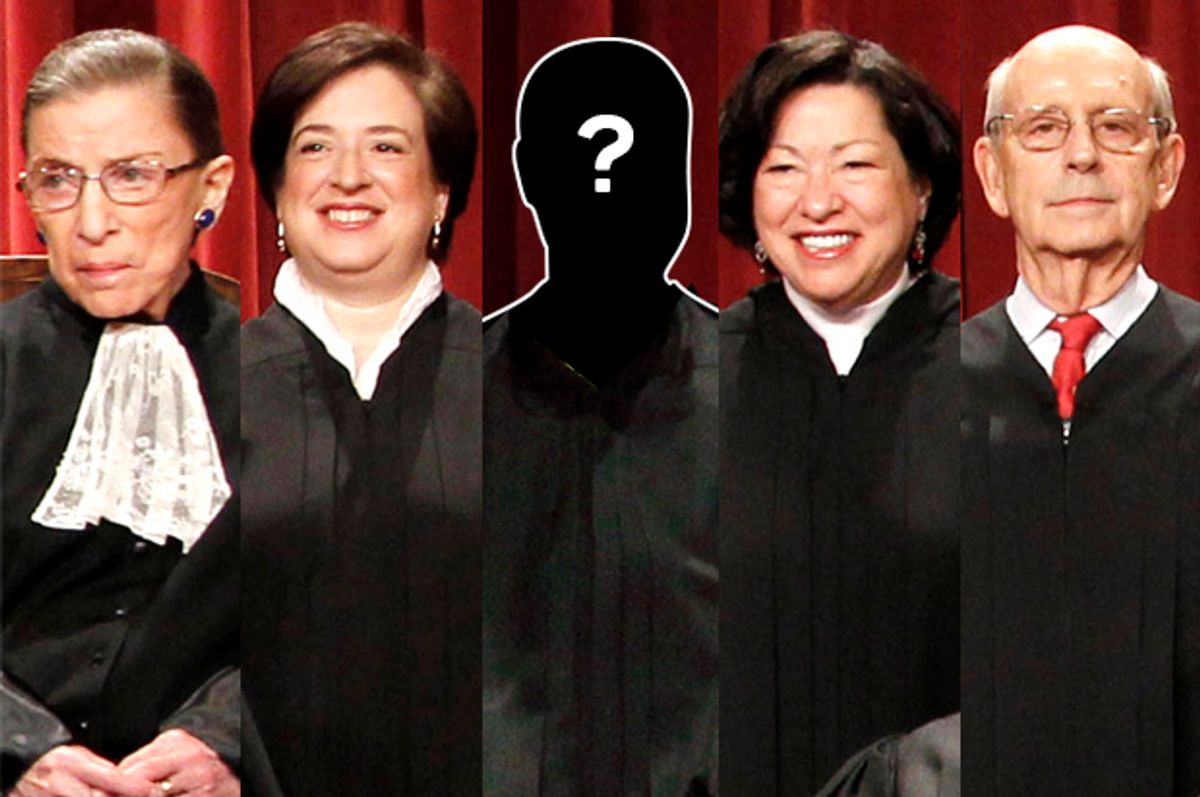 Associate Justice Antonin Scalia’s death, paired as it is with the 2016 election, leaves the future of the Supreme Court hanging in the balance. Yet while it’s obvious what a conservative future for the court would look like, it’s unclear what direction a progressive court would take. While conservatives have used judicial activism in recent years to reshape American politics, it is, somewhat ironically, murky what an activist progressive agenda would be.

The myth that liberals favor an activist Supreme Court is popular on the right. It is based largely on the legacy of the Warren court, though the most frequently cited “activist” decision, Roe v. Wade, was decided during the conservative Burger Court, and was written by Justice Harry Blackmun, a Nixon appointee. A better reading of history, informed by works like Ian Millhiser’s "Injustices" and Erwin Chemerinsky’s "The Case Against the Court," shows that for most of the court’s history it has been activist in favor of big business and powerful elites. The most famous decision in this vein is 1905's Lochner v. New York, in which the court invented the “liberty of contract” to strike down labor regulations. (This sounds abstract, but Millhiser does the amazing service of drawing from contemporaneous documents to show how squalid working conditions at the time were.)

More recently, as well, conservatives on the court have had an activist streak. They have rewritten the Second Amendment, even though the previous interpretation had been settled for centuries. The court struck down key provisions in the Voting Rights Act, even though it had recently been repeatedly reauthorized by overwhelming majorities in both chambers of Congress. Conservatives on the court also memorably argued strongly in favor of striking down a president’s signature piece of legislation on grounds that most legal scholars (and Reagan’s solicitor general) found laughable. (Twice!) Conservatives on the court gutted Arizona’s popular public financing system. And the court has watered down Roe v. Wade, to the point where, for many women, the right to abortion exists in name only.

The point here is not to simply bring up the many qualms liberals have with the Roberts court, but rather note that in each case the court is exerting judicial activism: It is either overturning decades of precedent or it is exerting supremacy over the elected branches of government. Rather than favoring an “activist” court, for the last three decades, liberals have fought for a more constrained court, one that respects precedents on issues like abortion, guns and interstate commerce and empowers the elected branches of government and regulatory agencies.

That could all change. With the death of Antonin Scalia, a Democratic president -- whether Obama or his successor, should Hillary Clinton or Bernie Sanders win in November -- would have the opportunity to flip the court and also possibly to replace Ginsburg and Breyer, two liberal giants. It is also not unlikely that either Clarence Thomas or Anthony Kennedy could leave the court in the next five (or if a Democrat won in 2020, nine) years. But even without Thomas or Kennedy leaving, a Democratic president would shift the balance of the court inexorably toward the left. This would be the first time since 1968 (1968!) that the majority of SCOTUS justices were appointed by Democrats. The flip side is equally important: A Republican win would lead to two or even three decades of hegemony on the court. A conservative court would likely embrace Lochnerism and begin striking down labor, health and environmental protections with vigor.

Having been out of power for so long, thinkers and writers on the left have tended to view the court largely as a threat to progressive values, rather than a means to promote them. (It is important not to overstate the power of the court to bring progressive change, as Gerald N. Rosenberg argues in "The Hollow Hope.") This leaves us in an interesting situation: Progressives are finally poised to have control of the Supreme Court, but the progressive agenda largely consists of overturning bad rulings like Shelby, Heller, Parents Involved and Buckley.

The last time that Democratic nominees filled the Supreme Court, progressives eagerly proposed ways that the court could protect the oppressed. Legal scholar Frank Michelman, for instance, argued that basic rights to food, shelter and healthcare, are guaranteed by the Constitution. Today, such imagination seems less widespread, though the possibilities of an activist progressive court are endless.

Imagine if the court decided that the Hyde Amendment is unconstitutional, because abortion is a fundamental right and the government should facilitate, not restrict, access to abortion. Imagine if, rather than simply allowing school desegregation plans to be implemented, the court mandated more of them, since schools across the country are rapidly resegregating (see chart). Imagine if the court declared that unequal funding for poor schools and schools that are majority students of color is not simply a gross injustice, but one that is in violation of the Constitution. Imagine a court that didn’t think confronting racial injustice was behind us, but rather in front of us. Or a court that opened the doorway to prosecute corporate environmental, labor and human rights abuses. Or a court that took seriously pay discrimination, unfair scheduling and wage theft, rather than limiting the ability of workers to file class action suits. The court could defend whistle-blowers and limit the surveillance state, which disproportionately preys upon people of color. By strengthening the Fourth Amendment, the court could rein in prosecutors and police officers, paving the way for decarceration.

A progressive Supreme Court could immediately end solitary confinement and would certainly find unconstitutional injustices in our current bail and public defense system. Further, in much the same way that the conservative court has worked to strengthen conservative causes by disempowering workers and empowering billionaires, a progressive court would empower cities to have more latitude in decision-making. Rather than just roll back Shelby, a progressive court could rule that voter ID laws and proof-of-citizenship requirements are unconstitutional. The court could also strengthen protections for workers trying to unionize or rule that right-to-work laws are unconstitutional. A progressive court would enshrine equality of political voice as a legitimate reason for campaign finance laws.

Progressives need an agenda for the court

Yet it’s unclear where many of the potential appointees stand on these issues, which of these areas to prioritize and what if any litmus test a Democratic president would apply on these issues. On the right, the situation is a bit different. As legal scholar Mark Tushnet notes, “Basically, anyone whom Ronald Reagan selected for the Supreme Court who had strong ties to the Federalist Society would have done just about what Scalia did.” Court watcher Jeffrey Toobin notes in "The Nine" that Bush had a very clear agenda for his appointees: Preserve the power of the president and begin dismantling Roe v. Wade. When Bush vetted possible candidates, Toobin notes, conservative activist groups were consulted, and at one point 60 “pro-family groups” were called so that Rove could make a case to them for the then-prospective nominee, Harriet Miers.

The progressive moment, on the other hand, doesn’t seem to have a clear ideological litmus test for the court, or top priorities in making appointments. Should a Democratic president favor an appointee with a strong background on choice, but who opposes limits on campaign finance? And what if a candidate has a strong progressive background but is a white man, given how important lived experience to judging? Further, might the progressive movement want to make a strategic decision to de-prioritize the court to focus money and organizational muscle elsewhere? Should there be a more concerted effort to create a pipeline for progressive legal talent? How will the court shape the constraints on other branches of government?

Progressive legal scholars should begin debating these ideas and laying out legal justifications for them. Elite liberal thought leaders should begin to think about the possibility of a progressive court. Presidential candidates vying for progressive votes should say where they stand; not just on overturning bad conservative decisions, but on blazing the path to the future. And activists should begin considering what their demands might be, while think tanks begin to support them with legal research and advocacy. Possible Supreme Court appointees should be vetted based on their positions on these important questions.

On the right, organizations like the Federalist Society have dramatically re-envisioned the possibilities of the Supreme Court. Recently, conservatives have begun organizing a movement to wipe out decades of precedent and bring back the Lochner era, in which the court would strike down minimum wages and labor regulations. The right, in short, has done what progressives have not: invested serious intellectual and organizing energy into creating a more conservative court. To combat this, we need a progressive agenda for the court. Progressives may well soon take the reins. But we don’t know where the hell we’re going.