Are we dreaming? Charles Koch endorses Bernie Sanders (kind of)

How ironic: Charles Koch is now worried about our “rigged” political and economic system 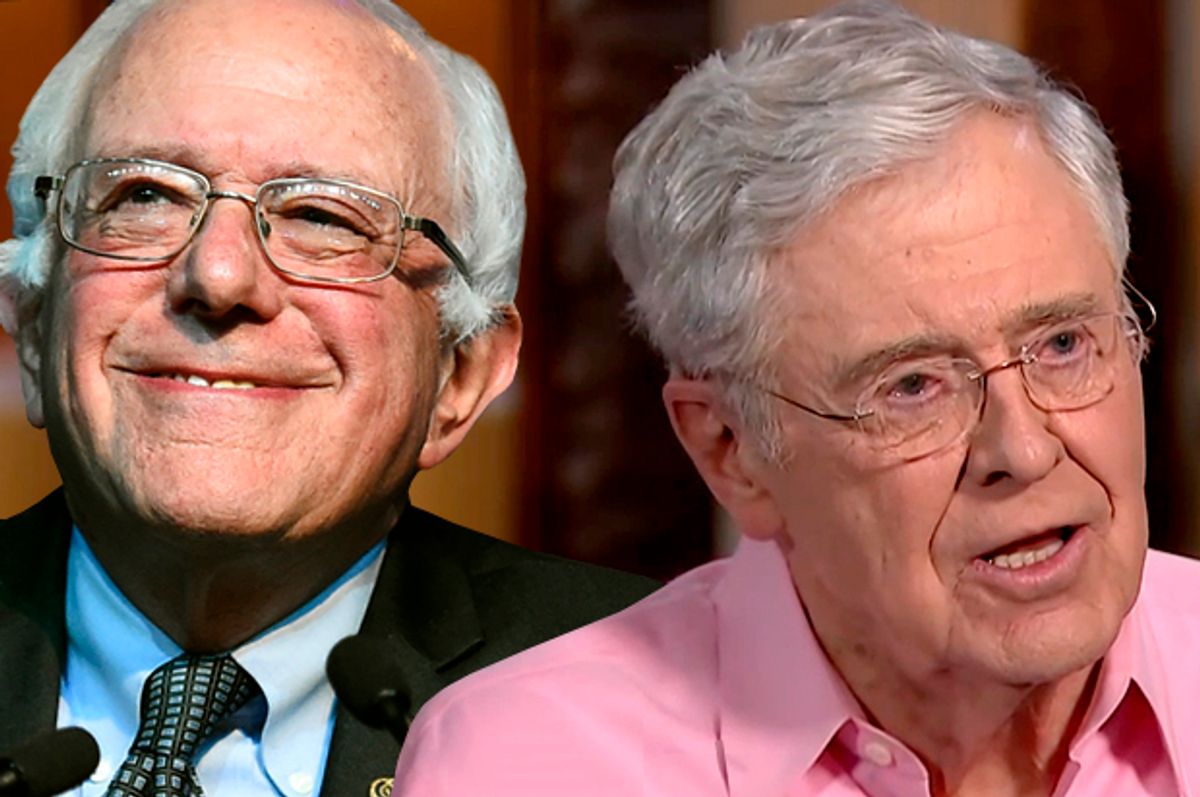 Charles Koch, ostensibly the nicer half of the Koch brothers, has made a concerted effort this election season to soften his image. For years the Kochs avoided the media spotlight, preferring to work their political magic behind the scenes. There was a noticeable shift in strategy last October, however, when Charles allowed the Wall Street Journal to run a plauditory profile of him and his brother.

In the WSJ piece, Charles lamented the loutish tone of the 2016 presidential race of political discourse in general. “It's mainly about personalities and 'your mother sucked rotten eggs,'” he complained. Koch's frustration is understandable. He and his brother are projected to spend close to $900 million on this election – I imagine he expects to get the desired results at that price.

The gaping irony of Koch's concerns about the “lack of substance and civility” in our politics is hard to miss. After all, political discourse reached Cro-Magnon levels right around the time of the Tea Party's rise, in early 2009. And the Tea Party, lest we forget, was an offspring of the groups Americans for Prosperity and Freedom Works, both of which are Koch-financed. These groups, moreover, have their origins in a single organization called Citizens for a Sound Economy, which, naturally, was founded by the Koch brothers in 1984.

The Tea Party was a pet project of the Koch brothers (indeed they launched the first national website for the movement), and they used it to flood the process with money and obstructionist propaganda. As a result of the Tea Party's success, dozens of legislative nihilists were sent to Congress with the sole mission of shutting government down. Compromise has been near-impossible ever since.

Koch lurched into the spotlight again this week with a guest op-ed in the Washington Post. And once again his remarks are dripping with irony. Titled “This is the one issue where Bernie Sanders is right,” the piece reads as a quasi-endorsement of Sanders. Quoting:

“As he campaigns for the Democratic nomination for president, Vermont Sen. Bernie Sanders often sounds like he's running as much against me as he is the other candidates...Even so, I see benefits in searching for common ground and greater civility during this overly negative campaign season. That's why, in spite of the fact that he often misrepresents where I stand on issues, the senator should know that we do agree on at least one...The senator is upset with a political and economic system that is rigged to help the privileged few at the expense of everyone else...He thinks many corporations seek and benefit from corporate welfare while ordinary citizens are denied opportunities and a level playing field. I agree with him.”

Interesting. In addition to his abiding concerns about incivility, Koch is now more worried about our “rigged” political and economic system. He continues:

“Consider the regulations, handouts, mandates, subsidies and other forms of largesse our elected officials dole out to the wealthy and well-connected. The tax code alone contains $1.5 trillion in exemptions and special-interest carve-outs. Anti-competitive regulations cost businesses an additional $1.9 trillion every year. Perversely, this regulatory burden falls hardest on small companies, innovators and the poor, while benefiting many large companies like ours. This unfairly benefits established firms and penalizes new entrants, contributing to a two-tiered society.”

Again, Koch isn't wrong here, and it's nice to see him echoing Bernie Sanders on this front. The problem, however, is that the Koch brothers haven't just benefited from this perverse system, they've propped it up. As much as anyone, the Kochs have used their money to influence policy and rig the game in their favor.

Just a few examples: In a blatant quid pro quo deal with the Bush administration in 2002, Koch industries secured “a lucrative contract to supply the nation's Strategic Petroleum Reserve with 8 million barrels of crude oil.” The Kochs then wielded their influence to win contracts to purchase Iraqi crude oil during our occupation. As the ThinkProgress report notes, the Kochs have also lobbied for taxpayer bail outs in Alaska; leaned on Midwestern politicians (to whom they've given untold dollars) to use eminent domain to seize property and clear space for the Keystone XL Pipeline, “which runs from Koch-owned tar sands mining centers in Canada to Koch-owned refineries in Texas”; and they've happily accepted over 80 million in defense contracts and, worse still, billions in taxpayer handouts for subsidiaries of Koch industries.

For a guy who insists we shouldn't “allow government to pick winners and losers” because so doing moves us “further away from a society of mutual benefit,” he sure does enjoy self-interested interventions in the market. Which is perhaps why he closes his op-ed with a rhetorical question: “At this point you may be asking yourself, 'Is Charles Koch feeling the Bern?' Hardly.”