Now this is an "outsider candidate": Zoltan Istvan, a Transhumanist running for president, wants to make you immortal 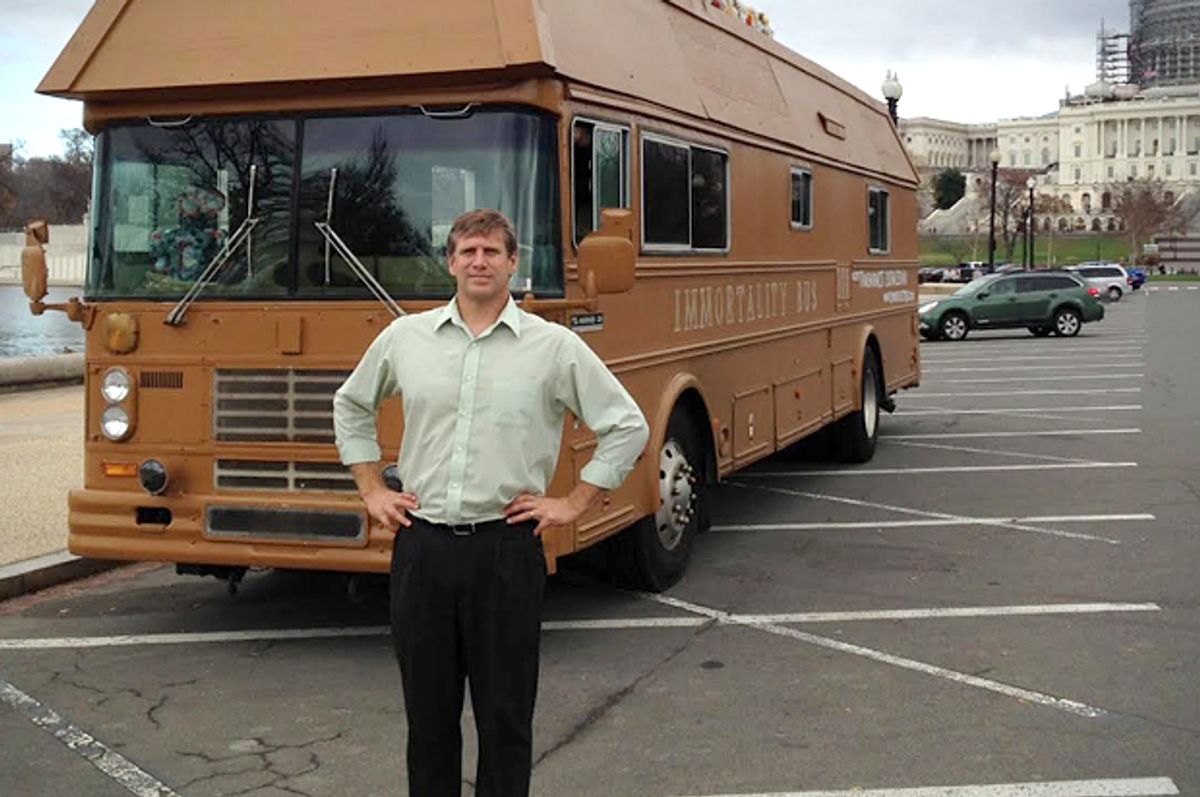 The 2016 election is proving to be in many ways, unforgettable. And it’s not just because of the 24/7 news cycle dominated by gotcha moments, Donald Trump's insults and endless polling.

While we have a rare combination of candidates with a real chance of taking the White House — a woman, a Jewish socialist and a real estate magnate —  there's another  you probably haven’t heard about: a Transhumanist.

Zoltan Istvan, 43, the leader and founder of the Transhumanist party, has entered the race as a third-party candidate promising the “facilitation of immortality.” Istvan, who lives in California, first made headlines when he set out on a cross-country campaign tour in a bus shaped like a hearse last September. His main philosophy: enliven America’s technological advancement by combining humans with machines, to improve and prolong life.

In U.S politics, the two traditional parties have consistently dominated the electorate. In fact, Sen. Bernie Sanders is the only Independent in Congress, every other House member belongs to either the Democratic or Republican Party. But historically the country has had a history of fringe candidates, which typically get a few thousand votes in presidential elections. In 1992, billionaire businessman Ross Perot,who ran on the Reform Party, won 18.9% of the vote, the best finish by a non-major party candidate in a presidential election since Teddy Roosevelt won 27.5% of the vote in 1912. While Perot's Reform Party, like practically all third parties, has failed to emerge as a contender since then, candidates like him have had a significant impact on electoral outcomes.

Zoltan Istvan is still an ambiguity for most of the political world, and the Transhumanist party in its early stages of development, but there is something to be said about how his policies could predict the way the political landscape might change in the decades to come.

The word "transhuman" means beyond human. And the philosophy sounds like something that could only exist in Silicon Valley, near to where Zoltan and his family live. Indeed, Istvan claims that so far the Transhumanist Party comprises mainly “of scientists, engineers and people who love technology.”

“Transhumanists believe in singularity,” Istvan told Salon. “The singularity is the moment in time when artificial intelligence — presumably which we will create — will transcend the capability our human brains have to comprehend how fast technology is increasing.”

Istvan said that while there is no formal membership process, “based on social media, event turnouts, and donations — we now have about 25,000 supporters in the U.S.”

The presidential candidate also has 21,000 Twitter followers. (On a global scale there are recorded 25 Transhumanist Parties in five different continents, each with its own set of rules.)

At 21, Istvan set out to travel the world in a sailboat, becoming a freelance documentarian for National Geographic. (One of his more popular videos is “volcano surfing” on Mt. Yasur on the island of Tanna in Vanuatu). He says that his contacts in the journalism world are one of the reasons his campaign has been so successful, “It’s impossible for an independent candidate to rise up and make a splash unless he’s a billionaire or he’s on the Democratic or Republican ticket,” Istvan said.

Zoltan, a writer, philosopher and futurist, has spent the majority of his life working abroad. However since returning to the states, he has settled down with his physician wife and two daughters in picturesque Mill Valley and believes his calling is to transform American politics into the way of the future.

At first most of his policies sound ludicrous — something even Doc Brown might not have imagined — but when examined closer, they might just make more sense than most of the antiquated practices currently being thrown around by the GOP. Who wouldn’t want to be entirely dependent on renewable energy, or direct national expenditure to fighting cancer and diabetes rather than conflicts in far-off lands?

“The whole goal of my campaign is really to get the rest of America interested in science and technology,” Istvan said. “After my national bus tour, I found a huge amount of people in America are just not interested in using technology to overcome lots of hardships we suffer. I think they would be willing, but they have to be taught.”

To strengthen his position and spread the importance of Transhumanism, Istvan embarked on a five-month bus journey across the United States, eventually ending in Washington where he delivered the Transhuman Bill of Rights to Congress. Some of the laws included in the Bill: universal rights for human beings, sentient artificial intelligences, cyborgs, and other advanced sapient life forms.

So perhaps Istvan’s policies are a little eccentric, and not all of us would accept cyborgs as friends, but isn’t there something to be said about his action to update the country’s laws to reflect the current times? As a society we have adopted smartphones as loyal partners, accepted machines to replace manual labor, cloned organs and paved the way for designer babies. So, all things considered, heightening technology to further improve human lives seems a logical next step. The speed at which technology has developed in the last decade alone, leads us to only imagine where civilization will stand in the realms of technology in another decade.

With an American population that is approximately 75% Christian and a congress almost 100% religious, Istvan knows his goal will be no easy feat.

“My presence has been very strange,” Istvan said. “A lot of people accuse me of funny things like being the Antichrist. From a biblical point of view I fulfill a huge amount of the technicalities. I have Roman blood apparently, there’s too many 6’s in my name. So a huge amount of my building Transhumanism out in the public has come from my challenging Christian people who view Transhumanism very poorly.”

So far, the most prestigious endorsement for Istvan’s campaign comes from Bobby Kennedy III, the grandson of the late Robert Kennedy. Istvan says other celebrities such as Glenn Beck, Joe Rogan and Jason Silva of National Geographic’s “Brain Games” have also shown interest in Transhumanist policies but shy away from endorsing someone with no hope of winning. (When asked whether he’d ever spoken to Stephen Hawking, Istvan said, “Never, but would love to. I assume he’s a pretty popular guy.”)

Now, the question of immortality is not so infinite as it is finite. Istvan is unsure himself whether he would like to be immortal, but argues that humans should have the ability to live their lives until they see fit, and die however they want to.

“I don’t want to die from cancer when I’m 70 and can’t see my daughter get married,” Istvan said. “I feel like Schindler’s list where I’m that person at the end of the story saying, “I could’ve saved so many more.” Everyday we have 150,000 people die and we’re going to look back when we overcome death and say, “Wow we could’ve saved tens of millions more people had we just put some money into the technology a little quicker,” he added.

Zoltan says he finds it astonishing that no funds are being invested into anti-aging science by the federal government “or what we consider life extension science.” This despite Google launching Calico in 2013, an independent biotech company with the goal of combatting aging and associated diseases.

He also advocates for complete morphological freedom of expression; doing anything with our bodies as long as it doesn’t harm others, something the Republicans have been all too ready to shut down, by defunding Planned Parenthood and raging anti-transgender discrimination.

“Right now if you try to grow a tail, you’re not going to be able to. There are basic laws in place that wouldn’t allow you to do those kinds of things because you’re not supposed to.

Genetic editing might allow you to become a fish. We have Transhumanists who want to become fish,” Istvan said.

Tails aside, perhaps his most interesting and innovative policy is the introduction of “real-time democracy.” The idea that the public can actively participate in policy making decisions, in real time.

“There are platforms out there that are on our phones, and I don’t know why we’re not using them. We can influence the way Congress votes, sort of like the stock market. You can take a certain stock of an idea and have people vote on it,” the candidate said. “It’s not just the people chiming in every two years or four years.”

Istvan says this would be something that has to be accepted and moreover implemented by the government. “It would be much better to have the American public involved in the decision process of war, one way or another.”

In regard to his other policies, the candidate seems to be much more subdued identifying as a libertarian socialist. Istvan wants to make education completely free and mandate college for everyone, with the hopes that huge swathes of society will get multiple PHD’s.

“I think robots are going to take all the jobs, so people will be on a Universal Based Income — I can’t think of a more socialistic idea than that-- they might become artists, go to the Bahamas and write songs and drink margaritas. It’s really not up to me to decide what they do,” said Istvan.

The Transhumanist leader also insistently says that more freedom should be given to non-violent criminals. He claims that the mass incarcerated American population is the greatest tragedy in the country’s recent history, and that the money could go towards improving public education.

While Istvan is fully aware he's got not shot at winning, he said  his intention on entering the race was to spread the message of Transhumanism. On the campaign trail, he not only delivered speeches while meeting with locals, but also documented the insertion of a chip in his left hand, which he said allows people to pay at Starbucks, or check in at the airport.

“I’m a believer that they’ll be a big clash in five to 10 years between Transhumanist culture and the culture I saw when traveling across America. Everyone liked me and then I told them I had a chip, [and] they said I had the “mark of the beast.” It was very hard to try and explain to them that with this you can do all sorts of things, you can start your car without a key,” Istvan said.

Although Istvan has never voted in the past due to overseas travel, he says that he will most likely vote for a Democrat this year. Istvan added, “I’m somewhere between Bernie and Hillary in terms of political ideologies. I don’t lean as hard left as [Bernie] does but I do like him and I think he’s an exciting figure to have. A lot of places in the world have been taking in more socialistic leaders and I don’t think capitalism is going to survive more than 30 years. I like Bernie a lot.”