Save yourself! Leave Los Angeles now: TV's prestige comedies say living in the City of Angels will destroy you 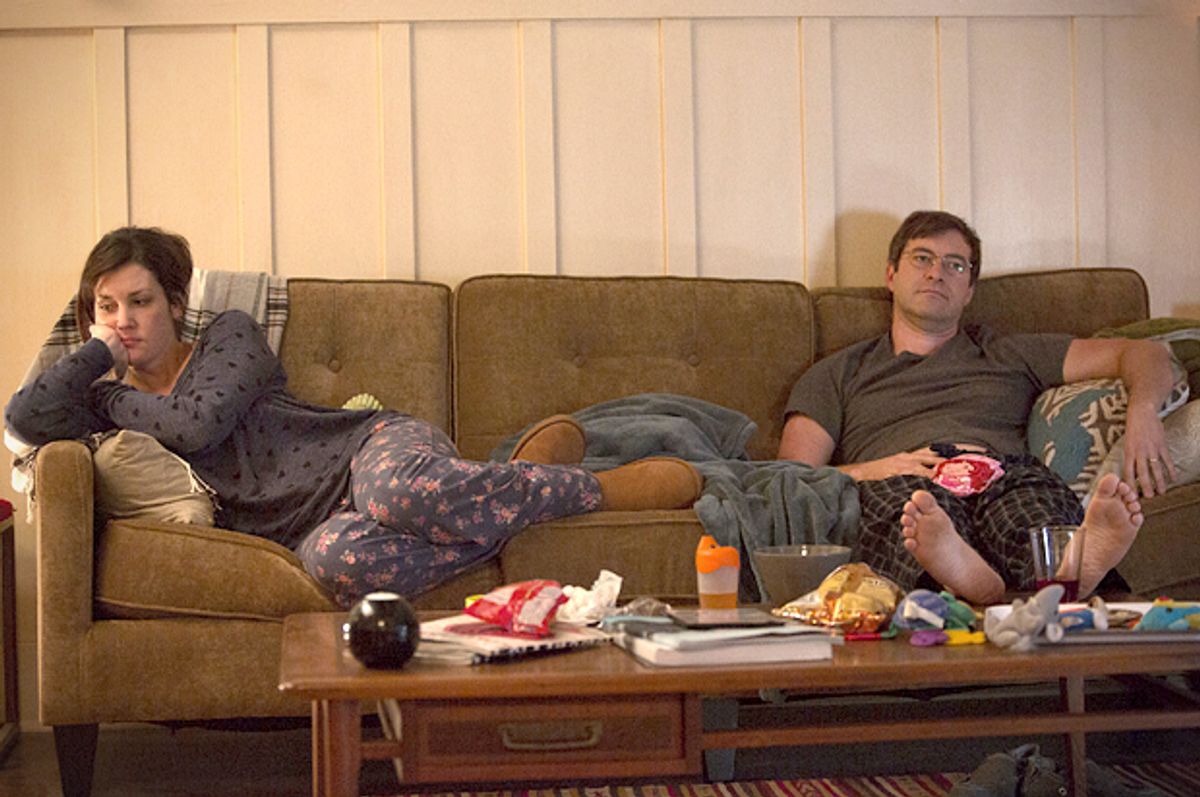 “Love” is theoretically supposed to be funny. The edgy comedy from Netflix, which debuted Friday morning, comes from prolific producer Judd Apatow, comedian Paul Rust, and “Girls” writer Lesley Arfin (best known for this idiotic tweet). Through dating mishaps and work indignities, the two leads, Gus (Paul Rust) and Mickey (Gillian Jacobs) meet each other and then do their best to sabotage their initial chemistry, leaning hard on the old vices that got them this far. The third episode of “Love,” following the initial (stoned) meet-cute, is when the show starts to reveal its tone, and it is breathtakingly, almost repulsively dark. Mickey’s boss starts flirting with her, and Mickey—through some combination of fear and delusion—decides to handle it by manipulating him into having sex with her so that he can’t fire her. She has no romantic or sexual interest in him; it’s purely a cagey move for survival. It is a horrifying scene to watch, both because it’s an awful thing to have to do and because it turns out to have been at least partly in Mickey’s head. He yells at her and then leaves. The show never revisits the tragedy of that moment.

Meanwhile, over at the TV set where Gus works—as the unglamorous tutor for the bored child actors—an attempt to push a pupil into diligence results in the 12-year-old girl breaking down into tears. “I’m under so much pressure right now. I don’t even want to work here. I hate this place so much. Everyone is old! … I want to go to a real school with real friends! You’re my best friend! You’re my best friend.” Gus has the opportunity to remove the actor, whimsically named Arya (Iris Apatow), from the set for 30 days. But, as he argues, if he makes the showrunner unhappy, she’ll never read his spec script. So instead of doing anything remotely resembling the “right” thing, he fabricates Arya’s responses to a standardized test, effectively keeping her in the prison of life on set for his own self-interest.

In the landscape of young, hip, and edgy comedies—which are cropping up in droves on new networks Netflix, Hulu, Amazon and FXX, as well as old standbys like Showtime and HBO—a certain deep-seated bleakness toward life has become de rigueur. I hesitate to call this crop of comedies “indie,” because they are financed by some of the biggest budgets in television; a better term is prestige comedy, the counterpart to prestige drama. These have existed for some time, in the form of “Curb Your Enthusiasm” on HBO and “Weeds” on Showtime, and they have always tended toward the dark and deeply ironic, drawing from the much more cynical British tradition of comedy and catering to a smaller but socioeconomically powerful demographic.

But what’s more interesting—perhaps through mere correlation, perhaps not—is that these prestige comedies are making the case for Los Angeles to be a pretty awful place. So much of television’s existential despair today is centered on the sprawling metropolis of Los Angeles, home of the film and television industry, 4 million people, gridlocked traffic and the Kardashian clan. Meta-commentary on Hollywood’s grind is rife, but many of these shows also feature Los Angeles in rich, multifaceted ways—through sad, bad, or messed-up people. I’m not sure if I actually believe that living in Los Angeles corrupts your soul and makes you want to die—the Mexican food alone is worth living for—but it’s rather surprising how easy it is to conclude that based solely on watching some of the latest comedies to flood the market. These do not construe a love letter to the City of Angels; instead it’s more like an emo Livejournal post, with no comments.

In both "Togetherness" and "Love," half of the lead cast works in “the industry”—Brett (Mark Duplass) and Alex (Steve Zissis) in “Togetherness,” Gus in “Love.” All three suffer from frustrated ambition and deep-seated cynicism about their creative process. In a nod to the city’s highway culture, the type of car a character has is made to be significant. (There are a lot of Priuses.) And the eternal summer of Southern California tinges both sets of characters’ existential angst with melancholy irony; in the pilot of “Togetherness,” Brett faces a beautiful Pacific Ocean view and finds himself dissatisfied, while in the second episode of “Love,” Mickey and Gus climb onto the hood of her car and eat fast food while high, in an expression of high-school rebellion and bone-deep boredom.

Meanwhile, “Broad City” is appealing precisely for its unstoppable buoyancy; and though “Girls” has had its share of incredibly dark moments—“On All Fours” comes to mind—its hallmark is that the show’s deluded characters at least believe themselves to be happy, even if they clearly aren’t.

Looking at the other prestige comedies of the past few years, the trend becomes more and more pronounced. Some of New York City’s newer comedies currently include “Master of None,” “Unbreakable Kimmy Schmidt” and “Inside Amy Schumer,” along with veterans “Louie” and “Archer.” With the exception of “Louie,” all are characterized with a surprising amount of levity, and I’d argue that even “Louie” is less depressive than ironic. Meanwhile, in Los Angeles, we have “BoJack Horseman,” “You’re the Worst,” “Casual,” “The Comeback,” “Transparent,” “House Of Lies,” and “Review.” At minimum, all are pretty dark; several deal directly with addiction, depression and loss.

Comedy Central’s “Review,” for example, features a man dismantling his life because of an inescapable contract with a television production studio in which he is compelled to “review” real-life instances others would shy away from. This has included divorce, racism and being buried alive. “Casual,” on Hulu, twines a story of lost promise and childhood trauma with a contemporary story of post-divorce dating and a strange undercurrent of incest. “The Comeback” has a middle-aged woman navigating Hollywood in a series of humiliating pitfalls; “You’re the Worst” put one of its lead characters through paralyzing depression this season; “BoJack Horseman's" lead character is a depressed alcoholic. And season two of “Transparent” is about the Holocaust. The cheerfully upbeat “Arrested Development,” one of the most brilliant L.A. comedies from just a decade ago, feels like it is from a different universe.

These dark prestige comedies are altogether some of the best television on the air at present, often both funny and horrific in the same terrible swoop. But damn, what is happening in Los Angeles? The filter through which the city is viewed is often through habitual, unglamorous substance abuse or warping mental illness. “Love” features a terrible date at Hollywood’s infamous Magic Castle and a long drug trip on the L.A. subway; neither comes off too well. In the first episode, Mickey wanders into a religious society preaching peace, love and tithing—a little more faux-Eastern than Scientology—while high on a couple of Ambien.

“Togetherness” is so disenchanted with its neighborhood’s public school options that the lead characters all band together to start a charter school; and by the end of the first season, nearly every character has been driven from the city to solve their problems, whether that is Sacramento or New Orleans. In the second, Michelle (Melanie Lynskey) ends up sparring with entitled mansion-owning moms and Tina (Amanda Peet) learns to navigate the metaphorical cage-fight that is parenting in the greater Los Angeles area—struggling to find a separate peace in a mass of other SUV drivers, all drinking Starbucks coffee or sucking on marijuana lollipops. And seemingly every other show has a subplot about amateur comedy, which is apparently a blight on the city.

Ironically, I suppose, what’s fantastic about “Togetherness,” written and directed by the Duplass brothers, is how beautiful and unique Los Angeles is filtered through their lens. The song “Black and Gold” is featured prominently at the end of this second season’s episode five, and though this isn’t explicit in the show, to my mind the colors refer to not the stars in the sky, as the lyrics read, but the golden glow of pairs of headlights weaving their way down darkened freeways. It’s beautiful; it’s also melancholy, a narrative of isolation despite the bright lights.

And in fits and starts, this type of beauty is visible throughout all of these dark-as-night comedies; “BoJack Horseman's" production designer, Lisa Hanawalt, creates a gorgeous, vividly colored “Hollywoo” for the animated show, while “You’re the Worst's" “Sunday Funday” brings the viewer through a carnival of Los Angeles’ many quirky attractions, even if most of the characters can barely bring themselves to enjoy them. (This season’s Sunday Funday episode put Lindsay (Kether Donohue) naked and yelled-at in a pit in a haunted house, being emotionally devastated while a few random visitors debated the golden age of television. Fun for the audience, but not so pleasant for her.) “Transparent” is a transportingly beautiful show, making the most of California’s golden light and stretches of ocean. And the houses of these series are gorgeous, making the best of Los Angeles’ propensity for glittering vistas and multi-tiered mansions.

What does it all mean for Los Angeles? As a New Yorker, I’m tempted to take the moral or cultural high ground; but as someone who also loves Los Angeles, I’m compelled to question further. In 2012, my former colleague Todd VanDerWerff (who is a proud Angeleno) dubbed that year “the year of the half-hour TV show,” noting the proliferation of tonally complex half-hour shows such as “Girls,” “Enlightened, “Louie,” “Veep” and even “Archer,” which were breaking new ground in the shorter format. These shows are technically comedies, in the tradition of television categorization, but VanDerWerff noted a lot of range in what these shows were producing. There’s been so much innovation in television, most of it based in Los Angeles, that this proliferation of very dark comedies might just be the next step in evolution for these genre-bending half-hour shows.

After all, more TV shows means more opportunity for culty, niche comedians, who are more willing or more likely to push the envelope of what is safe or expected humor. Many comedians decamp from New York to Los Angeles to work in TV and film, bringing their own fresh perspectives (while others refuse to make the move).

“Love” pushes the envelope too much for me, but “Togetherness,” on the other hand, doesn’t quite push it enough; there is something humanizing about watching the culture of this city extract its pound of flesh from the characters, even as they struggle to find the beauty and meaning that appears to flourish in abundance around them.

Or, Los Angeles destroys people. You know. One of those.