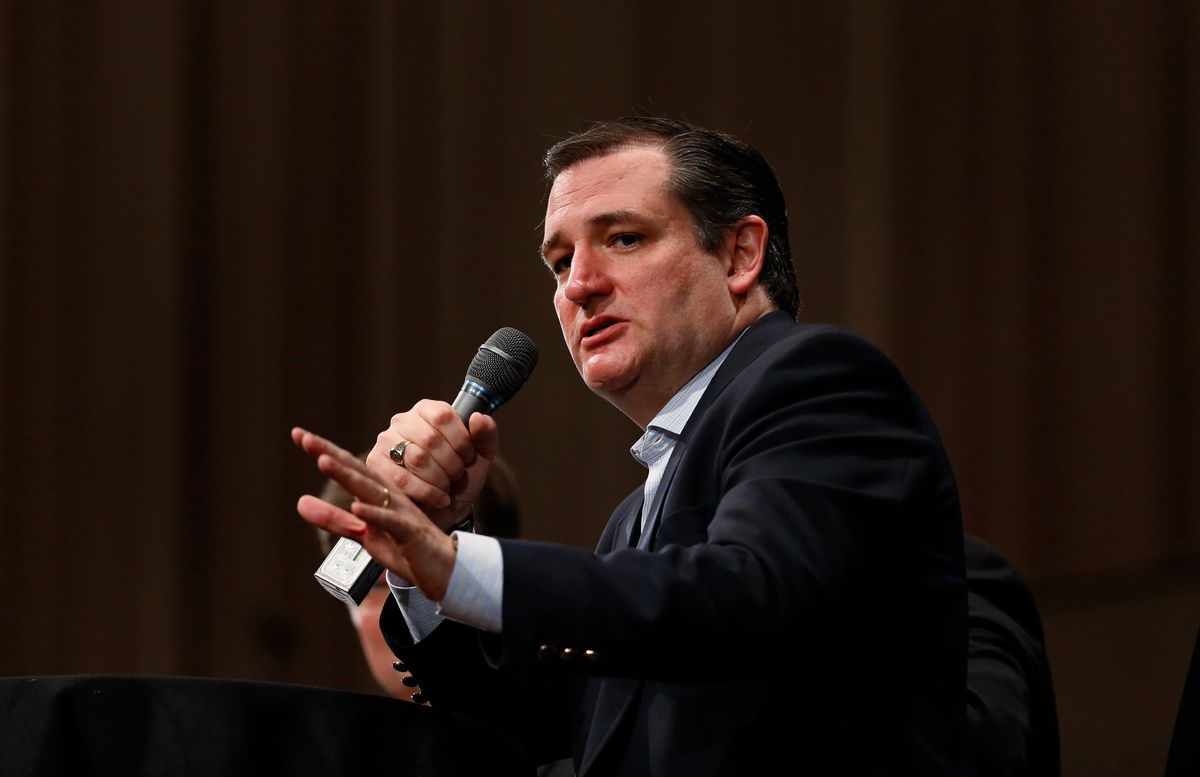 Here is how head-smackingly ridiculous the 2016 election has gotten before we’re even out of February. This week, the second-place candidate for the Republican nomination told an audience of South Carolina primary voters that as president, he will ban the military from serving gluten-free MREs (Meals Ready-to-Eat, those foil-wrapped packets of dehydrated food-like substances that soldiers carry into combat zones). I’m sure that’s right at the top of every soldier’s wish list, right after sufficient armor to wear in combat and a functioning Veterans Administration.

What is Ted Cruz’s rationale for saving our mighty fighting forces from the scourge of exposure to dietary items for sufferers of celiac disease?

“[T]he last thing any commander should need to worry about is the grades he is getting from some plush-bottomed Pentagon bureaucrat for political correctness or social experiments — or providing gluten-free MREs."

Psst, no one tell Cruz that our military’s Muslim soldiers can get halal MREs if they so desire. His brain might turn into pudding.

As a signal to the screeching, right-wing banshees that make up the Republican Party base, Cruz’s statement had everything. Disdain for pencil-pushing REMFs who interfere with the military’s readiness, thereby putting our nation’s security at risk? Check. Slamming the hated “political correctness” that is ruining America? Check. “Hippie-punching” those granola-crunching vegans in places like New York City who have made gluten-free a big deal in American cuisine over the last decade? Check. Implicitly sneering at liberals like our current Kenyan Usurper-in-Chief who use the military for “social experiments” like letting gay people enlist in it? Check, check, check.

OK, it’s South Carolina, which has particularly strong pride in the American military. (Though who knows why, considering what happened the last time the state tangled with it.) Which makes this a good pander that would have had less bite – pun intended – in, say, New Hampshire.

All campaigns have their absurd memes, but what struck me was that this moment wasn’t even in the Top-5 list of the most surreal sights of the week. Consider:

• After the death of Supreme Court Justice Antonin Scalia on Saturday, Donald Trump went on right-wing screamer Michael Savage’s radio show, where he casually entertained the conspiracy theories surrounding the judge’s death. Asked about the allegedly “unusual circumstances” under which the body was found, Trump agreed that it was suspicious that Scalia had had a pillow over his face. (Spoiler alert: He actually didn’t.) I’m a little surprised he didn’t go on to blame Obama for the decline in the quality of work of our nation’s stealth assassins. (“Our president can’t negotiate a good deal with Iran or send a competent contract killer to smother a Supreme Court justice without leaving evidence! When I’m president, I’ll make America No. 1 in contract killers again!”)

Not that it should be a surprise to anyone that our nation’s foremost Obama birther would entertain this garbage. But then, back when he was our biggest birther, did anyone foresee him being a leading presidential candidate five years later?

• After Trump sent the Cruz campaign a cease-and-desist letter over a campaign ad that Trump found “false and defamatory” (to which every political ad maker in history responded, “DUH!), Cruz responded by calling a press conference that he used to double-dog-dare Trump to sue him. “One of the things I look forward to most of all is deposing Donald Trump. For that particular endeavor, I may well not use outside counsel, I may take the deposition myself,” he told the assembled media, raising the specter of a presidential candidate deposing his chief rival in a civil lawsuit.

The press conference followed Trump’s unhinged rant about Cruz earlier in the week, during which he called the Texas senator “unstable” and threatened to also file a lawsuit not only about the “misleading” ad, but also alleging Cruz’s Canadian birth leaves him ineligible for the presidency, something he has been promising he might do for a while.

Lawsuits. This might be the most American election ever.

• Jeb Bush was viciously mocked on social media for tweeting out a picture of a handgun with his name engraved on it. This was such a clumsy pander to the pro-gun rights crowd and the lizard-brain impulse in conservatives to yell “Freedom!” at the slightest provocation that one wonders why Bush didn’t go ahead and follow it up with a picture of himself wearing a Yosemite Sam costume. Really, is there anyone out there, even in South Carolina, who looks at the patrician Bush of the Kennebunkport Bushes and sees a guy for whom the right to bear arms is an inviolate one? Anyone who thinks he spends his weekends at a target range? Even his brother never claimed to spend his time on his ranch hunting game or teaching his daughters the joys of gun ownership. Settle down, Jeb.

• Trump became exorcised by some mild criticism of him by Pope Francis over his plan to build a wall on the Mexican border to keep out migrants. This in itself doesn’t actually seem so weird. It was Trump’s defenders insinuating that the pope is a hypocrite because the Vatican has walls around it that truly turned the whole thing into art.

This spectacle continues to be the most ridiculous and pathetic primary season in memory. When the history of it is written, I’d like to suggest the title somehow paraphrase this tweet. Something like “The Political Shitshow of Our Lives” has the virtue of being both catchy and depressingly true.