Donald Trump has a secret shame: Every playground bully has a toxic fuel

Playground thugs play to the crowd but they're always afraid of something, an expert tells us. Like being a loser 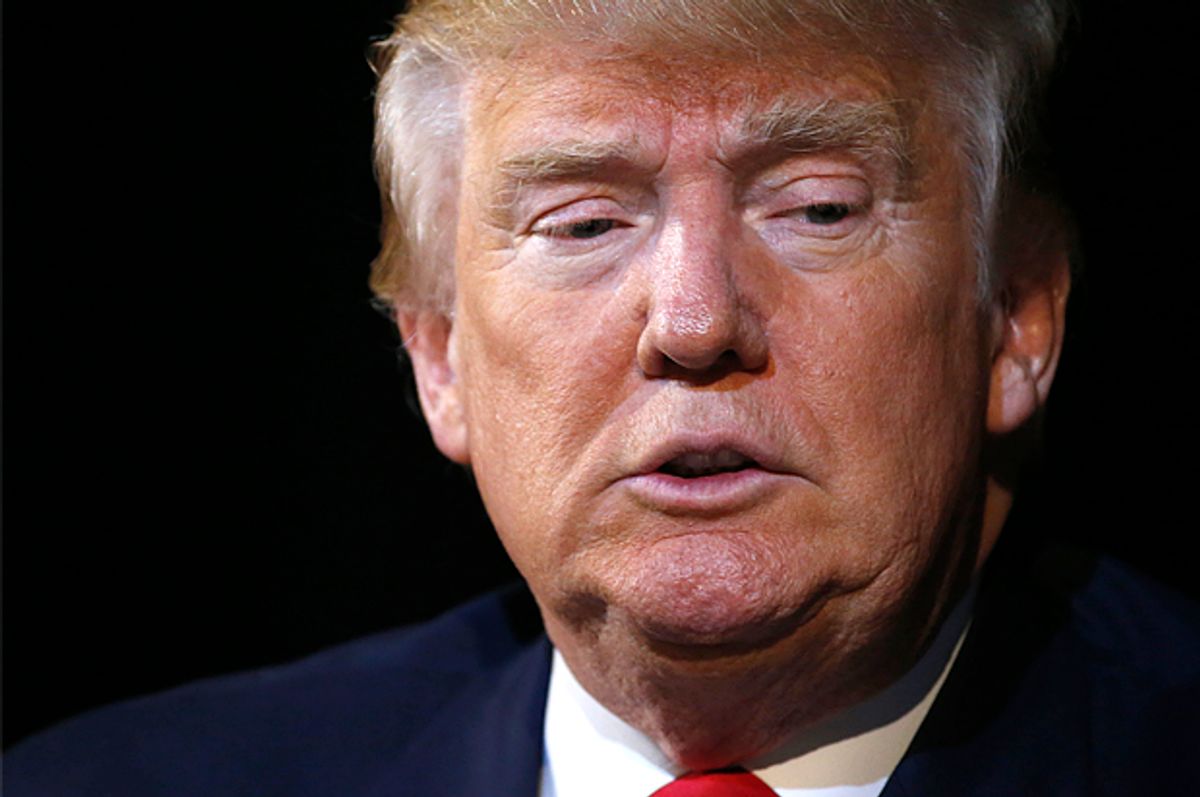 Donald Trump is a playground thug, said Jonathan Fast, author of “Beyond Bullying: Breaking the Cycle of Shame, Bullying, and Violence” (Oxford 2016). Like many juvenile oppressors, the Donald plays to the crowd, bragging as he advocates waterboarding and walls to keep out Mexicans. In this kindergarten drama, heightened with explosive tweets and sound bites, voters cheer from the sidelines. Possibly, they’re scared of being losers.

After all, most adults have been bullied at some point in their lives, according to Fast’s vigorous research on the subject. A dry-witted social-work professor at New York’s Yeshiva University, Fast has found the bully’s secret fuel -- shame -- a word so awful that even therapists avoid it. In this page-turner (Fast has also written science fiction), he claims that narcissism is a common defense against shame, which makes Trump such a delicious feast.

But Fast is also a fascinating case study. Born in New York City, this soft-spoken Connecticut resident belongs to an illustrious Jewish writing clan that includes former wife Erica Jong, who penned “Fear of Flying,” and their daughter, author Molly Jong-Fast. His Communist father, Howard, wrote “Spartacus” and refused to name names when called before the House Un-American Activities Committee in 1950. While Howard possessed a strong personality, Fast said his famous dad was more negligent than controlling. Today, Fast lives with his second wife, a Unitarian minister. They raised two sons.

We met Fast in his Yeshiva office overlooking Washington Heights in New York City. Slim and silver haired, the bespectacled professor delivered insights with a remarkably calm voice dotted with thoughtful pauses. But on his filing cabinet glared a massive statue: the head of a great ape wearing Fast’s distinguished graduation cap.

How is Donald Trump the classic bully according to Swedish psychologist Dan Olweus, whom you quote in your “Bullying In and Out Of Schools” chapter? Olweus identified risk factors, including a child’s “hot-headed” temperament.

If you think of the definition by Olweus, the gold standard of bullying research, bullies are typically larger and stronger than the other kids kids in their class. You can say that Trump is bigger and stronger in the sense that he has more money than other people, and a television show, so he has a bigger image and a stronger financial power. Bullies are opportunistic. They pick on weaker people who won’t strike back. He’s done this with minorities and women. His mentors are probably saying to him, “Keep doing what you’re doing. It’s working.” People are watching.

When Trump verbally attacked Megyn Kelly, who moderated the GOP debate in August, he referred to her menstrual cycle when he said: “She gets out there and she starts asking me all sorts of ridiculous questions, and you could see there was blood coming out of her eyes, blood coming out of her … wherever.” What do you make of comments like that?

He couldn’t say the word vagina, like a little kid. Bleeding from the eyes. He couldn’t say the real word. The thing is that people like fights. In high school, did you ever stand around and watch kids fight? I did. “Don’t break it up. Let’s see what happens.”

Should we take Trump seriously, or is he a performance artist using taunts to stand out among other candidates?

We shouldn’t take him seriously. He’s almost like an insult comic, like Don Rickles. Some comedians process shame through their work in a positive way. One type of human laughter is about the joy of overcoming hardship. In “Beyond Bullying,” I talk about Army Staff Sergeant Bobby Henline, whose face was disfigured after a roadside explosion outside of Baghdad in 2007. He had burns over 90 percent of his body. His therapist said, “You’re funny. You should do comedy.” He has gotten lots of support from other wounded soldiers. People are laughing with him because he has overcome a disfiguring shame.

In “Beyond Bullying,” you mentioned that you were bullied by a kid named Mark when you were 8 years old. You wrote that you finally lost control and knocked Mark down over a table at summer camp.

Later, in the fifth grade, a smaller kid broke my arm, which was embarrassing. But there was something really good about that. He called me up afterward and apologized because he felt bad. I said, “That’s alright.” That phone conversation was what is known as a restorative practice, with the idea of repairing relationships. It was nice between us after that, and I got to show off my cast at school.

In your book, you mentioned restorative programs like SaferSanerSchools that have reduced disciplinary referrals. You also attended a Names Can Really Hurt Us event, where “kids laid bare their adolescent souls,” from admitting the shame of ADHD to having a sister with autism. Can we ever get rid of bullying?

No, because you can’t get rid of mean people. You can reduce it. Simply positioning teachers in the hallway during changes of class can be helpful. The best idea is to create the civil school with restorative practices.

Are we ashamed of shame?

We are. As long as you have a thread of doubt about your identity, then you’re susceptible to shame. When you’re in therapy, for a serious problem rather than maintenance, you get to a point in the work where it stops, like a speed bump. That’s usually when you’ve reached a shaming situation that is too toxic to talk about. It’s so horrible you feel like you’re going to die if other people know it, like with incest or a situation where your buddies got blown up and you survived. What you do at that point is what psychoanalyst Helen B. Lewis did in the 1970s. You could put therapy on hold and do psycho-education on shame to demystify it for the client. The other thing is to encourage clients to keep a shame diary, which opens the way to talking about their central shaming experience that they’re scared to discuss. No one ever mentioned shame to me in therapy. The first time I went, I thought, “I hope I don’t have talk about that.” And I never talked about it.

What is Trump ashamed of?

I can’t imagine what his shame is. I know he went to military school. The only group he hasn’t viciously attacked is gay people, but he actually did say inflammatory things in a Howard Stern interview in 2008. I looked it up because I was curious at why he wasn’t bullying the LGBT community to the same degree he was everyone else. In the interview, Stern pushed him and pushed him. So it’s there, but there’s some reason why he’s not talking about that now.