The 10 dumbest celebrity quotes ever: “Gay marriage is something that should be between a man and a woman”

Lately, it seems like actors can't stop saying dumb things to the press—it's all part of a long Hollywood tradition 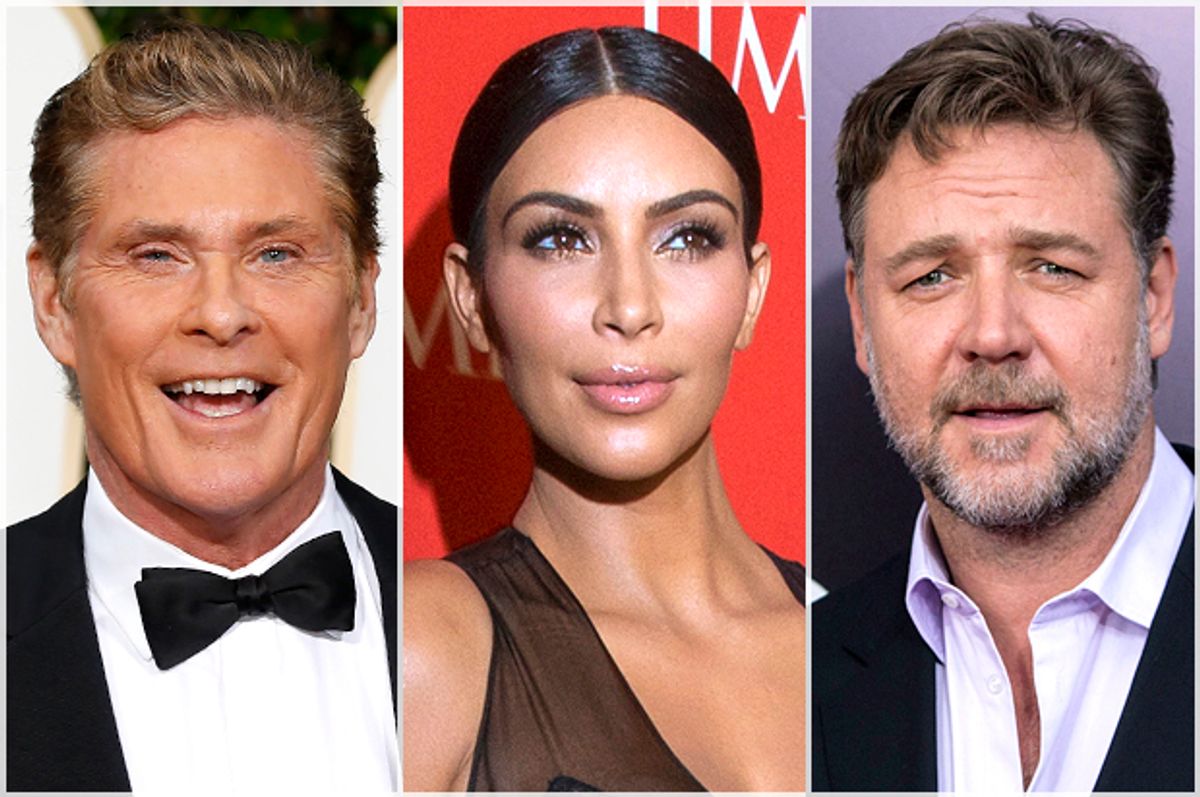 It seems like everyone’s PR team is asleep at the wheel this year. 2015 has been a very ugly year for publicists to the rich, famous and Caucasian, as white celebrities just can’t stop saying embarrassingly stupid things.

After Michael Caine, Helen Mirren and Charlotte Rampling all stoked controversy by dismissing the Academy Awards’ ongoing race controversy, Oscar winner Meryl Streep decided to die on the same hill. During a press conference for this year’s Berlin Film Festival, where she serves on a panel of judges, Streep was asked about the fact that all of the panelists are white. Would she be able to understand a movie from, say, the Middle East or North Africa?

“There is a core of humanity that travels right through every culture, and after all, we’re all from Africa originally,” she said. “We’re all Africans, we’re all Berliners.” Clearly she was having what Matt Damon was having.

Following Streep’s unfortunate comments, Eddie Redmayne decided join the foot-in-mouth party. On the BAFTAs red carpet, Redmayne was asked about playing Lili Elbe, the transgender painter whose story inspired “The Danish Girl.” The 34-year-old responded, "It's extraordinary how trans issues have come into the mainstream media since we made ‘Danish Girl,’" appearing to take credit for the work being done by Janet Mock and Laverne Cox, as well as trans activists all over the world. (He later walked back the remarks.)

These myriad controversies were yet another reminder that it’s dangerous to put too much stock in what celebrities have to say because, well, Katharine Hepburn didn’t calling acting “the perfect idiot's profession” for nothing. If you need further proof, here’s a roundup of the most tone-deaf, ridiculous and just plain dumb comments from famous actors.

In 2012, New Yorkers braced for the onslaught of Hurricane Sandy, but “I Know Who Killed Me” actress Lindsay Lohan refused to let a little thing like the bitterly destructive force of Mother Nature’s wrath get her down. “WHY is everyone in SUCH a panic about hurricane (i'm calling it Sally)..? Stop projecting negativity! Think positive and pray for peace,” the 29-year-old actress tweeted to her followers.

Sandy was the second-most destructive hurricane in history, causing an estimated $32 million billion in damage to the East Coast; 53 people were killed.

2. Russell Crowe thinks that women over 40 might get work if they weren’t so sad and desperate

Dear women over 40: Russell Crowe has heard your complaints about ageism in Hollywood, and he thinks they’re bullshit. In an interview with the Australian magazine Women’s Weekly, the Oscar-winner advised actresses to act their age. “The best thing about the industry I'm in—movies—is that there are roles for people in all different stages of life,” Crowe said. “I think you’ll find that the woman who is saying that [the roles have dried up] is the woman who at 40, 45, 48, still wants to play the ingénue, and can’t understand why she's not being cast as the 21-year-old.”

The numbers, of course, prove Crowe wrong. The reason women’s roles dry up as they age is because there are fewer parts written for them. While men over 40 represent 53 percent of male speaking parts in films, women over 40 account for just 30 percent.

SCOTUS finally ruled in favor of marriage equality last year after a decade of heated debate on granting same-sex couples the right to marry. Back in 2003, former California governor Arnold Schwarzenegger announced his support for same-sex unions on Sean Hannity’s radio show—so long as the couple enjoying them is heterosexual. “I think that gay marriage is something that should be between a man and a woman,” Schwarzenegger said.

Many have claimed the Terminator misspoke, but he could have also been a big fan of Liza Minnelli and David Gest.

Elizabeth Hurley is notorious for throwing shade at any woman who isn’t rail-thin. In 2005, the actress/model, currently appearing in “The Royals,” told the London Mirror that she was tired of women wearing clothing that was “too small or too tight, unless you're slim and toned.” Hurley said, “I'm sick of seeing flab bulging out all over.” Her most notorious remark, however, was directed at famed beauty Marilyn Monroe. “I've always thought Marilyn Monroe looked fabulous, but I'd kill myself if I was that fat,” she once told Allure, remarking on the fact that the famed beauty was a size 16.

In truth, vintage sizes are very different than modern clothing, and today, Monroe would be a 4 or a 6. The average American woman, however, is a 14—meaning that Elizabeth Hurley would kill herself if she looked like the majority of women in the U.S.

5. Morgan Freeman and Stacey Dash are so post-racial

Proof that white people don’t have a total monopoly on saying really stupid things: Morgan Freeman called for an end to Black History Month back in 2005. His reasoning starts off sound: “You're going to relegate my history to a month?" he asked "60 Minutes." “I don't want a black history month. Black history is American history.” But it quickly goes downhill from there.

The prolific 79-year-old, who has starred in films as diverse as “Million Dollar Baby” and “The Dark Knight,” channeled his inner Stacey Dash when he said that the real problem is that we focus too much on race in America. To end racism, we need to “stop talking about it,” as well as referring to each other as “black” and “white.” With all due respect, it’s doubtful that ignoring race would have helped Trayvon Martin, Sandra Bland and Michael Brown much.

Former “Clueless” star Stacey Dash would echo those comments a decade later, blaming black folks for America’s racial division. “If we don’t want segregation, then we need to get rid of channels like BET and the BET Awards and the [NAACP] Image Awards,” she said.

It’s very difficult to be rich and famous. Reality TV star and sometime “actress” Kim Kardashian, whose credits include “Disaster Movie” and “Tyler Perry’s Temptation,” wants you to know that she’s a survivor. She’s survived being born into a wealthy family, numerous lucrative endorsement deals, amassing a multimillion-dollar media empire, and being married to one of the most famous men in music.

After her publicity wedding (followed by a publicity divorce) to NBA star Kris Humphries, the 35-year-old explained that talking to a teenage fan undergoing chemotherapy gave her perspective on her own hardships. “I spoke to a girl today who had cancer and we were talking about how this is such a hard thing for her, but it taught her a big lesson on who her friends are and so much about life,” Kardashian told the Guardian. “She's 18. And I was like, that's how I feel."

You know that beautiful, popular girl in school? The one who was crowned homecoming queen, dated the quarterback, and was beloved by everyone around her? Former “O.C.” actress Mischa Barton thinks that all of you mean old kids need to stop making her life so difficult with your universal praise and adoration. “The truth is, pretty people aren't as accepted as other people,” Barton told U.K. Cosmopolitan. “It comes with all these stigmas.”

Of course, no one’s life is perfect. Everyone has problems, even people who naturally look like they’ve been Photoshopped. But it’s hard to believe that Barton spent three years on one of the most popular teen dramas on television because of a lack of acceptance for pretty people.

8. Raven-Symoné won’t hire you if your name sounds "too black"

Former “Cosby Show” actress Raven-Symoné is no stranger to controversy. During her stint as a co-host of “The View,” Symoné defended referring to Michelle Obama as an “ape” and notoriously came out against the idea of putting Harriet Tubman on the $20 bill.

But her most forehead-slapping remark was when she came out against “ghetto-sounding” names. When discussing a popular YouTube video that mocks "the top 60 ghetto names," Raven-Symoné argued that it’s OK to discriminate against names based on race. “I’m not about to hire you if your name is ‘Watermelondrea,’” she said. “It’s just not going to happen.” (If "Freakonomics" is any indication, clearly corporate America agrees with her, too.)

David Hasselhoff is known for saying and doing ridiculous things. Famous for “Knight Rider,” a spin on “My Mother the Car” with even bigger hair, the ’80s TV actor refers to himself in third person as “The Hoff.” He once drunkenly ate a hamburger off the floor.

But his most ridiculous statement is also his most grandiose, reflecting on his stint on “Baywatch.” If there’s a trophy for misplaced humanitarian braggadocio, you’ve gotta give it to The Hoff— who clearly believes that his time on the popular T&A program was an act of profound charity. “Beyond its entertainment values, 'Baywatch' has enriched and in many cases helped save lives,” The Hoff is quoted as saying. He should definitely throw someone a copy of “Baywatch” while they’re drowning and see how that goes.

According to estimates from the Centers for Disease Control, 16 million Americans are currently living with a disease that was caused by smoking. An estimate from the American Cancer Association further tabulates that in the 20th century, more than 100 million people in the U.S. died from tobacco use.

But actress Sienna Miller—who you may or may not remember from her roles in “Foxcatcher” and “American Sniper”—believes that all of that could have been avoided if smokers just had a better outlook on that whole cancer thing. While being interviewed for the little-seen Dylan Thomas drama “The Edge of Love,” Miller discussed smoking cigarettes in the film: “I love them. Love them. I think the more positive approach you have to smoking, the less harmful it is.”

She has since given up smoking, but there’s no word on whether she’s quit being an idiot.