This is how to understand Donald Trump: The frustration he taps into is as old as America

His fans feel rejected by elites & threatened by a class they imagine beneath them. A story as old as the frontier 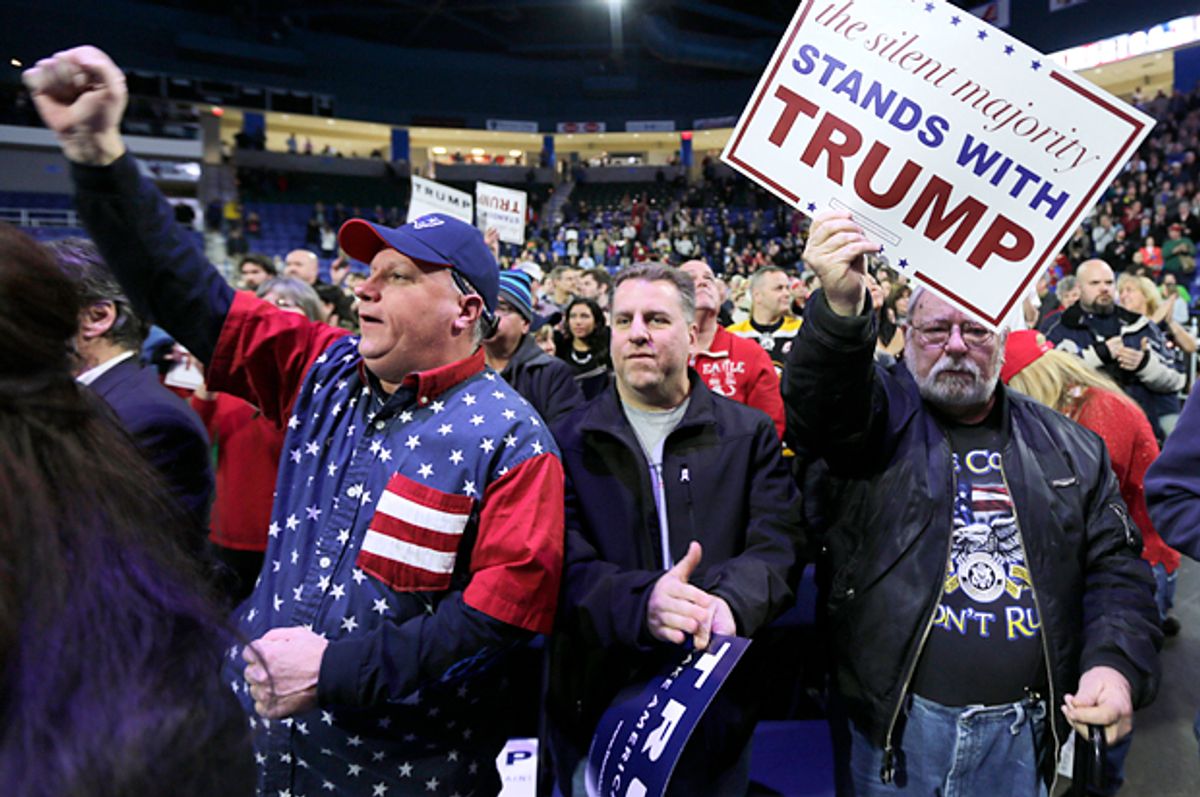 There may be no better place to start trying to understand the Donald Trump phenomenon than with Daniel Boone. After all, as his biographer Robert Morgan writes, “Boone would embody in his actions and attitude the aspirations and character of a whole era.” It is quite possible that Trump is doing the same for his—or, at least, for the sizable portion of America descended from the people Boone came to represent.

Boone’s life is emblematic of the problems of the frontier, not just those of the developing “need” for defeating native inhabitants and of settling a new land, but even of those created by tensions between the poor of the backwoods and the richer East, problems that amounted to what could best be described as the “internal colonialism” of economic exploitation. Trump, through the way he has styled his presidential campaign, is addressing today’s feelings of equivalent exploitation on the part of the descendants of the very backwoods that Boone came to represent.

Like Trump, who is the grandchild and child of German and Scottish immigrants, Boone wasn’t “of” the people who supported him so enthusiastically. They were descendants of the Scots-Irish Borderers who, after a century in Ulster Plantation in Northern Ireland, populated the Appalachian Mountains in the 18th century and who were always among the first moving west after that. Boone was of an English Quaker family in Pennsylvania, but the Boones joined the Scots-Irish in their push into the mountains and were quickly assimilated into that culture—just as Trump has been embraced by their descendants today.

The Borderers understood self-reliance; they resented it when they had to depend on others. Often fervent Calvinists or devotees of New Light descendants of Calvinism, they believed in a personal relationship with God and wanted nothing to do with churches, like the Anglican and Catholic, with centralized dictates. In addition, many of them "moved on" constantly because they soon found that they were no longer able to stay where they had settled in the colonial backwoods. Their land often proved not even to be theirs but belonging to speculators first in England and then in the coastal states. Trump fits comfortably with their descendants.

With the establishment of the Borderers in the backwoods, there were, essentially, two white American cultures—our contemporary American political split still reflects the differences between them. During George Washington’s administration, this split was papered over by the fact that one of the leaders who seemed to be representing the interests of the Borderers, Thomas Jefferson, leader of what were seen in some quarters as Americans Jacobins (those who seemed overly influenced by the French Revolution), was a tried-and-true son of the elite and no Borderer himself. John Mack Faragher writes that Boone, on the other hand, “was a hero, but a hero of a new, democratic type, a man who did not tower above the people but rather exemplified their longings and, yes, their limitations.” Jefferson, towering above, was no leader like that.

The type of leadership Boone represented was not “new” to Borderers. William Wallace comes through legend from the 13th century as much the same sort of hero, as do many more recent Borderer heroes, including Andrew Jackson and, of course, Trump. Jefferson was a hero both of institutionalized democracy and independence. These others were heroes of the democracy of freedom, of independence alone—a different thing.

Boone, whatever allegiance he may have developed for the United States during and after the Revolution, spent many of the later years of his life moving away from its power. If anything, he was not a hero of the United States but of freedom and of a developing American sort of individualism and desire for self-sufficiency—again, much as Wallace became in his older legend. Certainly, he was no hero of the secular-liberalism and American democracy held dear by the likes of Jefferson. That was a liberalism of the Enlightenment and the cities and towns of the East, quite distinct from the individualism of the frontier.

The towns, in Boone’s eyes as in those of many of the Borderer settlers, were rife with legal entrapments and predatory businessmen. Necessary optimists, the Borderers were always betting on a better day coming—specifically betting on a successful harvest or hunting trip, both requiring supplies acquired in advance and generally on credit. The debts they incurred each spring before planting or each winter before setting out on the hunt ensnared them when luck did not go their way—and many of them surely felt that the lenders and the law merely waited for something untoward to happen at harvest or for Indians or scoundrels to abscond with their pelts while taking none of the risks themselves. Boone, certainly, “ignored business, forgot business” and returned to the woods as quickly as he could after each trip to town, going back to those occupations that he and most Borderers believed to be of greater importance: hunting, farming, and caring for the family. While Trump doesn’t ignore business, certainly, he has had to deal with bankruptcy, just as Boone had to. Borderer descendants see that as resiliency, not failure, and feel sympathy with Trump in a way they do not with others from the rich coastal elite.

The debt of the Borderers was not always simply the result of needing money at the start of a hunt or a planting. Sometimes the debt came as a result of exploitation by suppliers and landowners and even by those who provided the market for Borderer crops and pelts. With very little legal or political clout, the people of the backwoods were open to exploitation by those backed by the legal and economic powers of the coast, an exploitation (given the cultural distinctions involved) that amounted to the same thing as colonialism, something only the Borderers, of the white population in America, continued to experience after the Revolution.

Absentee landlords and mortgage holders controlled the backwoods economy in a number of ways, all of which forced the farmers either into a monetary economy or into a flouting of colonial law, a precarious situation for families living on the edge of subsistence. They now found themselves needing cash to pay mortgages and quitrents and taxes imposed by distant overlords—or dodging the law. The farmers knew they could make it on their own, but, because of the current system of landownership, they needed a stake to get started and at least a small cash flow to repay any mortgage, the taxes, and any loans for supplies. If they could only get ahead on these, they would need no other help—or so they believed. Their hard work and individual initiative would be enough, allowing them to make or buy what little they needed.

One thing the Borderer farmers were certainly aware of was that they were paying an unfair share of taxes. Their land was taxed, and they had to pay poll taxes, excise, fees for court services, and more—while the rich paid little or nothing, the rich who owned the vast acreages the Borderers had “squatted” upon and wanted to buy. The difference, today, is that the Borderer descendants believe it is the people below them on the social scale who are benefiting, getting government largess paid for through their own taxes and not those above. For the Borderer farmers, there was no one below them anyway—except the few black slaves in the mountain areas, slaves owned not by them but by the people they were paying money to, the already rich.

As I have hinted, Boone, that paragon of American spirit and virtue, also got caught up in the debt cycle that ruined so many of his contemporaries. It happened a number of times during his life. Apparently, he went west not only to get away from people but also to get away from debt, land speculators, and the corruption that was, more often than not, the law. He knew, like the farmers around him, that he could make it on his own—if only he would be allowed to—but that human circumstances were against him. He had the individual talent, but society was structured against him.

It is this that today’s Borderer descendants believe about themselves and that Trump has managed to tap into. Their frustration is that the frontiers their ancestors were able to take advantage of disappeared over a century ago—they have no outlet, no way to get away from the forces they believe are draining them of the fruits of their labors. In a vice they imagine created by the media and the elite of the East Coast on one side and the grasping poor who simply want to take from them on the other, they are lashing back rather than escaping, cornered cats in their own view.

It doesn’t matter to them, then, what Trump says or believes, only that he joins them in reaction against the two sides squeezing them. The system, in their eyes, exploits them. Trump, who seems to successfully turn that around and exploit the system, never bowing to it, becomes their icon today—much as Boone, who legendarily wanted to be so far away from others that he could see no smoke from neighbor chimneys, was also once the embodiment of their desire for independence and the freedom to do things their own ways.