This is the key to Bernie Sanders' political revolution: Here's how we beat GOP obstruction

Truth is that a GOP Congress would stymie Bernie's program. There's an additional set of reforms we need as well 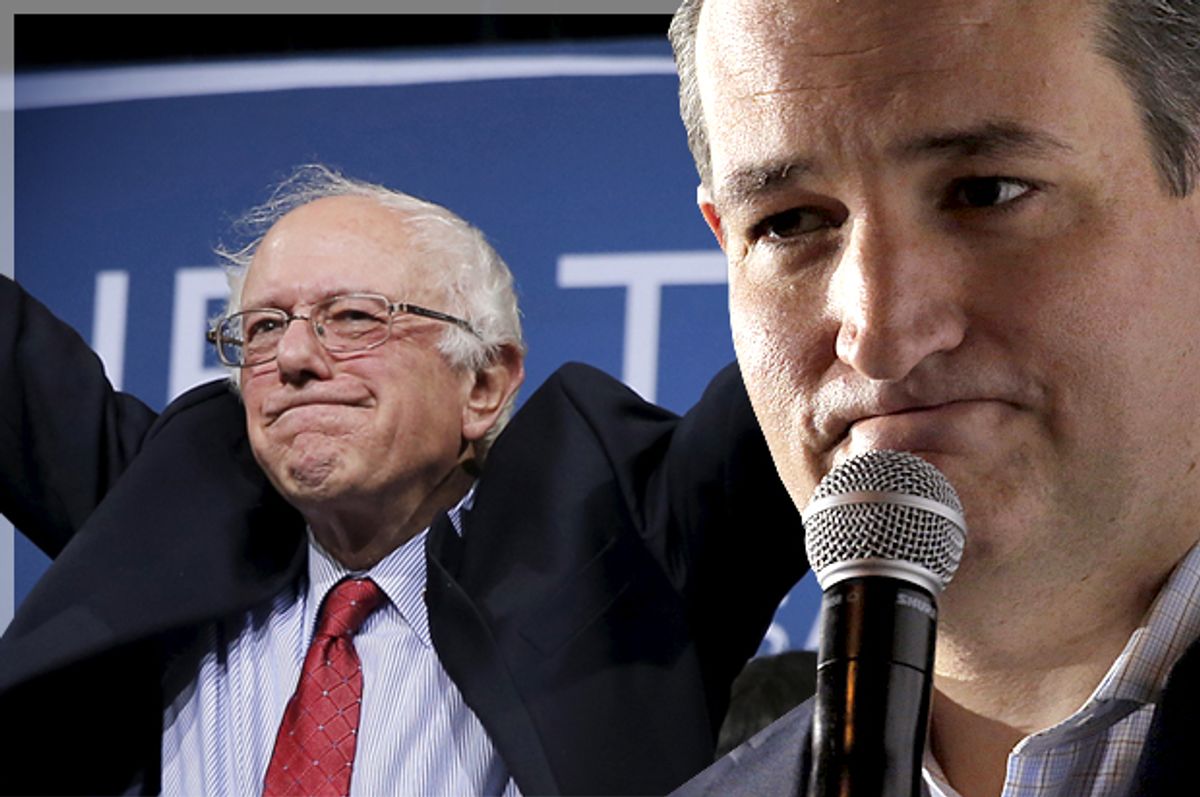 It is my belief that Sen. Bernie Sanders will be the next president of the United States -- a belief I’ve held since he first announced. Bernie is one of the most gifted politicians I have ever observed. He’s a person of great integrity and very clever. Many thought that calling himself a democratic socialist doomed his presidential candidacy, initially causing “the powers that be” to dismiss him. It turned out to have been an asset because this lack of national attention from opinion-makers permitted Bernie to grow his movement below the radar.

Having tied with Hillary Clinton in the Iowa caucuses, and winning overwhelmingly in New Hampshire, Bernie is now going to face an incredible assault by the Wall Street clique, which controls the American and global economies; by the Democratic Party establishment, beholden to Wall Street money; by mainstream media, largely owned by six Wall Street corporations and defenders of the status quo; and by Hillary and Bill Clinton, who cater to Wall Street’s interests.

These attacks on Bernie will attempt to marginalize him as a naive idealist, with an agenda he will be unable to get enacted in the next Congress. The possibility of a Sanders presidential administration will motivate Wall Street and its acolytes to pour record-breaking campaign contributions into congressional races to guarantee Republican control of the Congress, or at least to extend their control of the House of Representatives. Democrats should not count on Sanders’ coattails.

This anti-Sanders theme was addressed by a recent Op-Ed piece by Sen. Elizabeth Warren in the New York Times, stressing the importance of the president’s executive powers to effect some changes. She concluded, by alluding to Bernie’s broader agenda, that the people would simply demand its enactment.

Bernie knows the problem and clearly stated it in his baseline speech on Jan. 5, 2016: “No president, not Bernie Sanders or anyone else, can effectively address the economic crises facing the working families of this country alone. No president can do it alone. … What this campaign is about is building a political movement, which revitalizes American democracy, which brings millions of people together. … [W]hen millions of working families stand together, demanding fundamental changes in our financial system, we have the power to bring about that change.” Bernie has said repeatedly that the people will storm the Congress and demand change under a Sanders administration.

I have observed similar themes over the years, where large numbers of people make demands on their political leadership, yet fundamental and structural change in our system of governance fails to occur. Progressive activists particularly fall prey to this hope that the people can demand change. The nuclear freeze movement -- a citizen effort to outlaw nuclear weapons held by the U.S. and the Soviet Union -- was the largest movement I have ever observed, greater than any presidential campaign. The movement presented their signed petitions to President Ronald Reagan, who acknowledged receipt of the movement’s demands and proceeded to ignore them, after which the movement fell into political irrelevance. The nuclear proliferation issue is still with us and looms ever larger as the greatest threat to the planet’s survival.

More recently, during the public debate over how to expand health coverage to more Americans, polling indicated that more than 70 percent of the people wanted a single-payer system. Instead, the Affordable Care Act (Obamacare) was enacted -- actually a subsidy to insurance and pharmaceutical industries. Still, more than 20 million Americans remain without healthcare.

Demands from the electorate are usually insufficient to overcome the special interests and power of paid lobbyists. Nor is there any official acknowledgment that campaign contributions are a nuanced form of bribery that has corrupted our electoral system from the very beginning.

The truth of the matter is this: All people can do is to vote each Election Day, giving their “power” away to political representatives. If the people are subsequently unhappy with the conduct of the stewards of their power, all they can do is protest -- proof democracy is not working -- and wait two, four or six years to exercise their sovereign power on a future Election Day.  Mark Twain understood the essence of the problem when he observed at the high point of the robber baron era that if voting were able to change anything, they wouldn’t let us do it.

Bernie is correct in sensing the frustration and fears of average Americans.  Despite hard work, the economic and political structures of American life are benefiting the top 1 percent rather than creating opportunities for the majority.  That’s why he calls for a political revolution.

There are other instances in U.S. history where the people suffered economic oppression, resulting is a revolution. The greed of the robber barons from the Civil War to the turn of the 20th century set the stage for a movement that elected a majority of progressive legislators in various western state legislatures. Unfortunately, World War I closed this progressive window of opportunity.

Nevertheless, progressives enacted worthwhile laws improving health and labor conditions. Their most important accomplishment, however, was the revolutionary structural changes they made in representative government at the state and local levels of government by enacting Initiative, Referendum and Recall (IRR) laws. These IRR laws empowered the people to participate in the central power of government: making state laws and amending state constitutions. Citizens with this new legislative tool could finally address issues that state legislatures and local legislative bodies refused to even acknowledge.

Despite the efforts of elected representatives and elites to repeal IRR laws, the U.S. Supreme Court has repeatedly upheld the right of the people to enact laws by initiative. Does this accomplishment by the progressives of an earlier era not resonate with our present progressive generation? After reviewing the last hundred years of people legislating by initiative at the state and local levels of government -- as equal partners with their elected representatives -- can we not conclude that American citizens are equally qualified to legislate at the federal level of government?

Even though the initiative laws in the 24 states are inconsistent, and inadequate by failing to provide deliberative legislative procedures, the studies of social scientists show that states and communities that have empowered their citizens to make laws by initiative enjoy a superior quality of governance than those states that have not demonstrated a similar confidence in their electorate.

To the best of my knowledge, it is true that Sen. Sanders does not have a plan to successfully enact his agenda into law once he is elected president. And there is no reason to hope that a Republican-controlled Congress wouldn’t once again make its top priority a failed Sanders presidential administration, as they have with President Obama.

A contest between a Sanders administration and a Republican-controlled Congress will exacerbate Americans’ loss of faith in their government. A recent Pew Research Center poll taken last December found that 68 percent of Democratic respondents said the government doesn’t do enough to help the middle class, while 53 percent of Republicans felt the same way.

A deadlock between a Sanders administration and a Republican Congress is guaranteed unless Sanders can find a way to go over the heads of Congress and propose his agenda directly to the American people. The progressives in the last century found a way to do this by enacting initiative laws that empowered voters to enact state and local laws in twenty-four states. Can 21st century progressives enact a federal initiative law?

Bernie’s campaign movement could take the existing legislative proposal -- the National Citizens Initiative for Democracy (NCID.us) -- and organize American voters to enact it as the law of the land. NCID is meta-initiative legislation that extends the initiative procedures beyond the state and local levels and empowers voters with a legislative tool, including deliberative legislative procedures, to henceforth permit people to enact laws nationally by initiative. American voters would be able to participate in the central power of government – lawmaking -- exercising the same legislative power they give away on Election Day to their representatives in Congress. The NCID has earned the backing of Noam Chomsky, Ralph Nader, Tom Hayden, Daniel Ellsberg and other noted progressives

After American citizens have enacted NCID, President Bernie Sanders will then be able to use this national legislative initiative process to present his agenda directly to American voters for their decisions.

A radical program needs a radical mechanism to put it into effect.

We are just beginning the Sanders “political revolution.”  It will succeed if Americans move beyond merely making demands of their representatives, and take the radical step of becoming citizen lawmakers -- exercising the central power of government, enacting laws to correct the injustices of a dysfunctional representative government.  Then we will finally have a government “by the people.”