We must relearn to eat: Here's how we teach our kids -- and ourselves -- to find pleasure in what's good for us

We sneak veggies into kids' meals. We choose from chocolatey and salty variations. But taste is a matter of choice 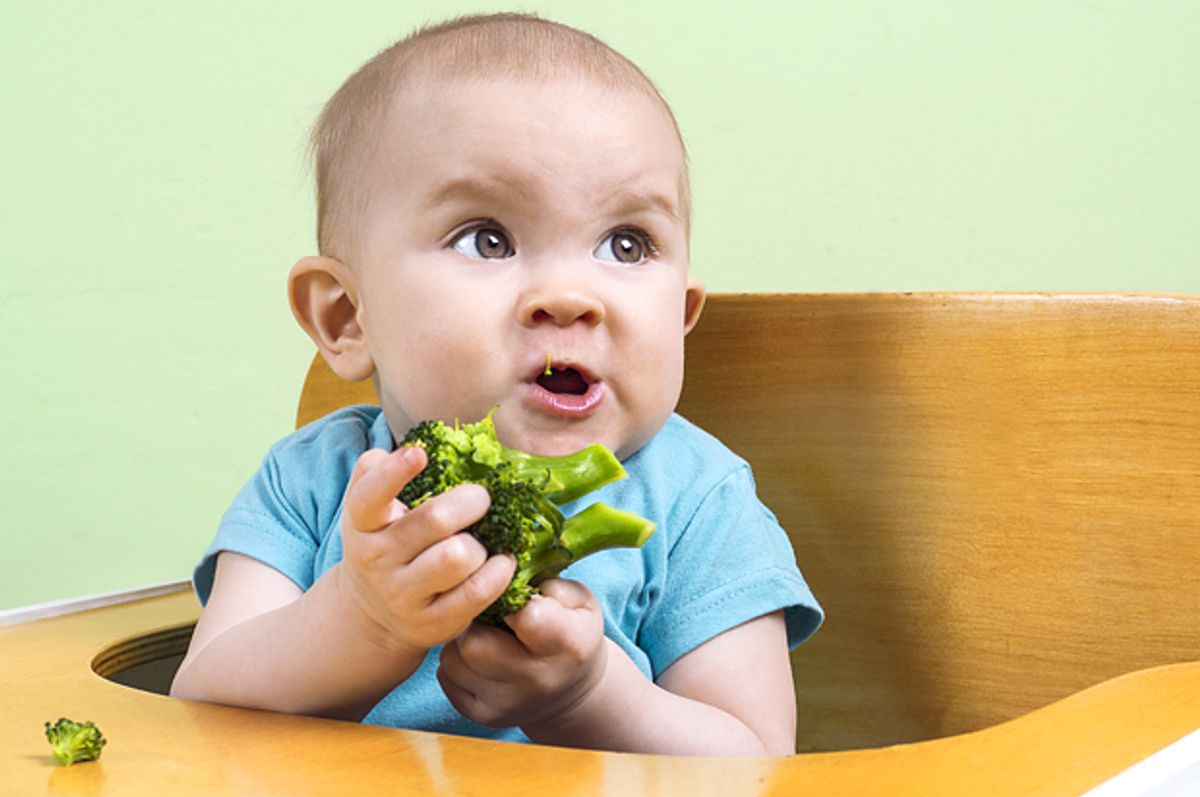 Excerpted from "First Bite: How We Learn To Eat"

So many of our anxieties around diet take the form of a search for the perfect food, the one that will cure all our ills. Eat this! Don’t eat that! We obsess about the properties of various ingredients: the protein, the omega oils, the vitamins. But this is getting ahead of ourselves. Nutrients only count when a person picks up food and eats it. How we eat—how we approach food—is what really matters. If we are going to change our diets, we first have to relearn the art of eating, which is a question of psychology as much as nutrition. We have to find a way to want to eat what’s good for us.

Our tastes follow us around like a comforting shadow. They seem to tell us who we are. Maybe this is why we act as if our core attitudes to eating are set in stone. We make frequent attempts—more or less half-hearted—to change what we eat, but almost no effort to change how we feel about food: how well we deal with hunger, how strongly attached we are to sugar, our emotions on being served a small portion. We try to eat more vegetables, but we do not try to make ourselves enjoy vegetables more, maybe because there’s a near-universal conviction that it is not possible to learn new tastes and shed old ones. Yet nothing could be further from the truth.

All the foods that you regularly eat are ones that you learned to eat. Everyone starts life drinking milk. After that, it’s all up for grabs.

Bone marrow from wild game is considered the best first baby food among the hunting tribes of Tanzania. If you were born in the Far Eastern republic of Laos, it could be gelatinous rice, pre-chewed by your mother and transferred from her mouth to yours (this is sometimes called kiss-feeding). For Western babies, that first bite of solid food may be powdered cereal from a packet or puree from a jar; it could be organic pumpkin, steamed and strained and served with a hypoallergenic spoon; or a random nibble from a parent’s plate. Aside from milk, there is simply no such thing as a universal food. Not even for babies.

From our first year of life, human tastes are astonishingly diverse. As omnivores, we have no inbuilt knowledge of which foods are good and safe. Each of us has to use our senses to figure out for ourselves what is edible, depending on what’s available. In many ways, this is a delightful opportunity. It’s the reason there are such fabulously varied ways of cooking in the world.

But we haven’t paid anything like enough attention to another consequence of being omnivores, which is that eating is not something we are born instinctively knowing how to do, like breathing. It is something we learn. A parent feeding a baby is training him or her how food should taste. At the most basic level, we have to learn what is food and what is poison. We have to learn how to satisfy our hunger and also when to stop eating. Unlike the anteater, which eats only small termites, we have few natural instincts to fall back on. Out of all the choices available to us as omnivores, we have to figure out which foods are likable, which are lovable, and which are disgusting. From these preferences, we create our own pattern of eating, as distinctive as a signature.

Or that’s how it used to be. In today’s food culture, many people seem to have acquired uncannily homogeneous tastes, markedly more so than in the past. In 2010, two consumer scientists argued that the taste preferences of childhood provided a new way of thinking about the causes of obesity. They noted a “self-perpetuating cycle”: food companies push foods high in sugar, fat, and salt, which means that children learn to like them, and so the companies invent ever more of these foods “that contribute to unhealthy eating habits.” The main influence on a child’s palate may no longer be a parent but a series of food manufacturers whose products—despite their illusion of infinite choice— deliver a monotonous flavor hit quite unlike the more varied flavors of traditional cuisine.

I went to the cinema with one of my children recently. We stood at the ice cream concession and I realized, with a jolt, that almost all of the options—other than plain vanilla—contained chocolate in one form or another. Would we pick mint chocolate chunk or cherry chocolate chunk or chocolate ice cream with chocolate brownie pieces or caramel ice cream with pieces of caramel chocolate? The danger of growing up surrounded by these endless sweet and salty industrial concoctions is not that we are innately incapable of resisting them, but that the more frequently we eat them, especially in childhood, the more they train us to expect all food to taste this way.

Once you recognize the simple fact that food preferences are learned, many of the ways we currently approach eating start to look a little weird. To take a small example, consider the parents who go to great lengths to “hide” vegetables in children’s meals. Is broccoli really so terrible that it must be concealed from innocent minds? Whole cookbooks have been devoted to this arcane pursuit. It starts with the notion that children have an innate resistance to vegetables, and will only swallow them unawares, blitzed into pasta sauce or baked into sweet treats; they could never learn to love zucchini for its own sake. In our harried, sleep-deprived state, as parents we find it hard to play the long game. We think we are being clever when we smuggle some beets into a cake. Ha! Tricked you into eating root vegetables! But since our children are not conscious that they are consuming beets, the main upshot is to entrench their liking for cake. A far cleverer thing would be to help children learn to become adults who choose vegetables consciously, of their own accord.

By failing to see that eating habits are learned, we misunderstand the nature of our current diet predicament. As we are often reminded, in doom-laden terms, eating has taken a dramatic collective wrong turn in recent decades. As of 2010, poor diet and physical inactivity accounted for 10 percent of all deaths and disease worldwide, ahead of tobacco smoke (6.3 percent) and household air pollution (4.3 percent). Around two-thirds of the population is either overweight or obese in rich countries, and the rest of the world is fast catching up. The moral usually drawn from these statistics is that we are powerless to resist the sugary, salty, fatty foods that the food industry promotes. Everything tastes better with bacon! As the journalist Michael Moss exposed in 2013, the big food companies engineer foods with a chemically calculated “bliss point” designed to get us hooked. Newspapers sometimes project a future in which obesity levels continue to rise indefinitely until almost everyone in the world is affected.

But there’s something else going on here that usually gets missed. Not everyone is equally susceptible to the dysfunction of our food supply. Some people manage to eat sugary, salty, fatty foods in modest quantities, and then stop. Others find these supposedly irresistible foods the opposite of blissful. If two-thirds of the population is overweight or obese, then fully a third is not. This is astonishing, given just how many opportunities there now are to eat doughnuts. Exposed to the same food that bombards us all, these lucky people have learned different responses. It’s in all our interest to find out how they have done it.

Many campaigners would say cooking is the answer. If only children could be taught how to cook and plant vegetable gardens, they would automatically become healthier. It sounds convincing: school gardens are a lovely thing. But by themselves, they are not enough to make a child relate to food in healthy ways. Our difficulty is not just that we haven’t learned to cook and grow food, however important that is; it’s that we haven’t learned to eat in ways that support health and happiness. Traditional cuisines across the world were founded on a strong sense of balance, with norms about which foods go together, and how much one should eat at different times of day. Much cooking now, however, is nothing like this. In my experience as a food journalist, chefs and food writers are, if anything, more prone to compulsive eating and other disordered food obsessions than non-cooks. For cooking to become the solution to our diet crisis, we first have to learn how to adjust our responses to food. Cooking skills are no guarantee of health if your inclinations are for twice-fried chicken, Neopolitan rum babas, and French aligot: potatoes mashed with a ton of cheese.

The reason that many find it hard to eat healthily is that we have never learned any differently. Like children, most of us eat what we like, and we only like what we know. Never before have whole populations learned (or mislearned) to eat in societies where calorie-dense food was so abundant and policed with so few norms about portion sizes and meal times. Nor is overeating the only problem that plagues modern affluent civilizations. Statistics suggest that around 0.3 percent of young women are anorexic and another 1 percent are bulimic, with rising numbers of men joining them. What statistics are not particularly effective at telling us is how many others—whether overweight or underweight—are in a perpetual state of anxiety about what they consume, living in fear of carbs or fat grams and unable to derive straightforward enjoyment from meals. A 2003 study of 2,200 American college students suggested that weight concern is very common: 43 percent of these students were worried about their weight most of the time (across both sexes), and 29 percent of the women described themselves as “obsessively preoccupied” with weight.

Our dietary malaise is often discussed in fatalistic terms, as if our preference for hamburgers were a life sentence: diets don’t work, sugar is addictive, and so on. What we forget is that, as omnivores, we are extremely gifted at changing the way we eat to accommodate different environments. Admittedly, no one has ever encountered a food environment quite like the one in which we now find ourselves, flooded with cheap calories in deceptive packaging. Surviving in our current situation will entail very different skills from those needed by a Paleolithic hunter-gatherer. Yet there is every reason to suppose that we are capable of acquiring these skills if we give ourselves half a chance.

If our food habits are learned, they can also be relearned. Imagine you were adopted at birth by parents who lived in a remote village in a far-flung country. Your tastes would be quite unlike the ones you ended up with. We all begin life with an innate liking for sweetness and a suspicion of bitterness, yet there is nothing inevitable in our physiology that says we will grow up dreading vegetables and craving fudge. The trouble is, we do not tend to see it this way.

Excerpted from "First Bite: How We Learn To Eat" by Bee Wilson. Published by Basic Books. Copyright 2015 by Bee Wilson. Reprinted with permission of the publisher. All rights reserved.

Bee Wilson is an award-winning food writer, historian, and author of four books, including Consider the Fork and Swindled. She has been named BBC Radio’s Food Writer of the Year and writes about food and other subjects for a wide range of publications including The Guardian, The London Review of Books, and the New Yorker Page-Turner blog. Wilson lives in Cambridge, England.