25 "facts" that really aren't: You've heard them all your life and they just aren't true

Carrots improve your vision, bats are blind & there's a 5-second rule when food falls on the floor, right? Well, no 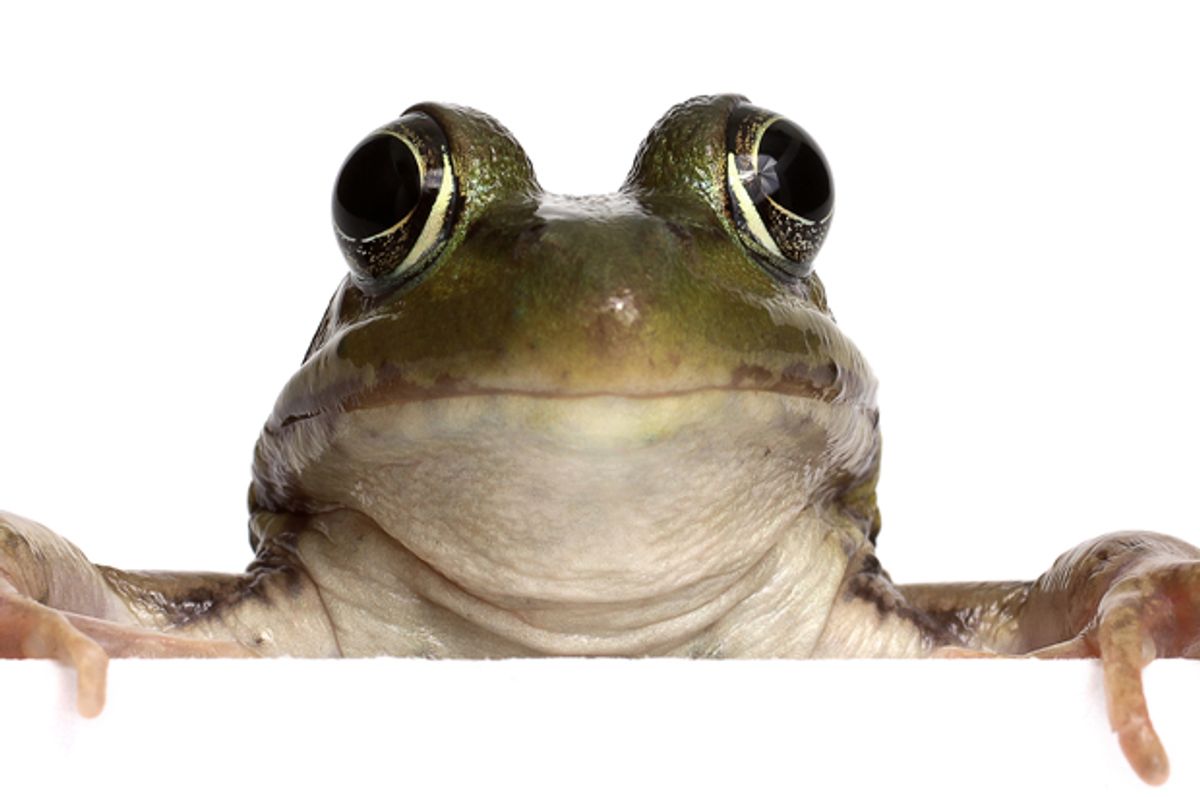 There are scientific facts that most of us accept as true. The Earth is round. Check. E=MC squared. Check. Humans evolved from apes. Not exactly.

The advertising campaigns for milk (“Got milk?”) have been some of the most popular and successful marketing in modern history. It is gospel among most people that milk builds strong bones and teeth. However, it’s not true. Many studies over the years have failed to find a link between milk consumption and a lower incidence of bone fractures.

3. Eating ice cream when you have a cold makes you more congested.

A prevailing myth about dairy in general and ice cream in particular is that consuming it increases mucous production. Eat up. According to the National Institutes for Health, there is, “no statistically significant overall association can be detected between milk and dairy product intake and symptoms of mucus production in healthy adults, either asymptomatic or symptomatic, with rhinovirus infection.”

The longstanding belief among parents of all persuasions is that sugar makes their kids crazy. The popular anecdotal example tends to be the children’s birthday party, where kids are loud, raucous and overly excited, with the blame pointing squarely at the sugary treats they have consumed. Truthfully though, no scientific evidence firmly links sugar to hyperactivity. The reason for the party hijinks more likely rests on the general excitement of kids being surrounded by their friends in a celebratory environment. The National Institute of Mental Health states that, "The idea that refined sugar causes ADHD or makes symptoms worse is popular, but more research discounts this theory than supports it."

5. The 5-second rule applies to food dropped on the floor.

It's okay to eat food you drop on the ground as long as you grab it within five seconds of the drop, or so the myth goes. Believe this fact at your own risk. If the dropped food item is dry, and the surface of the floor is clean, you’ll probably survive. But if the food item is moist, or if the ground is not clean, bacteria will be swarming the food practically upon impact, and there is no telling if that bacteria is harmless or not.

6. An apple a day keeps the doctor away.

No one believes this one anyway, but just to clarify, apples don’t protect you from anything in particular (well, maybe scurvy). They have plenty of fiber and vitamin C, and they make a healthier snack than candy, but in lieu of a flu shot, not so much.

7. Honey is healthier for you than refined sugar.

Just because your candy bar is sweetened with honey instead of sugar, don’t be fooled into thinking it’s healthy. Most scientists agree, sugar is sugar. The body processes honey essentially the same as high fructose corn syrup. The only advantage to honey may be that the caloric count may be lower, since honey tends to be sweeter than sugar and thus less of it is used in the product. And, by the way, brown sugar is just white sugar with a bit of molasses mixed in. There are some traces of nutrients in the molasses, but not enough to even remotely call it a health product.

8. Sharks do not get cancer.

The popular myth that sharks don’t get cancer, popularized by a nutritionist, I. William Lane, in the early 1990s, led to a health supplement craze of consuming powdered shark cartilage in the hopes of staving off or curing cancer. Not only does this not work, it has helped lead to the needless slaughter of millions of sharks in the past decades. And guess what? Sharks do too get cancer. Tumors have been found on many species of sharks.

9. Sharks must continually swim or they die.

Not only do sharks get cancer, but they can stop swimming and they won’t croak. At least most of them can. While a few species do have to keep moving to pass water over their gills, most can hang out just fine. However, all sharks do lack swim bladders, so if they stop swimming, they sink.

No, they don’t. Frogs and toads may look bumpy, but those aren’t warts, and you can’t catch them. Humans give you warts. Or more specifically, the human papillomavirus, which is usually passed around by shaking the hand of an infected person.

Bats do use their sonar (echolocation) to find their way around, but they are not blind. In fact, their eyesight is almost as good as a human’s.

12. Poinsettias can kill you.

The widespread belief that the popular Christmas plant, the poinsettia, is a deadly plant that will kill your pets or you if consumed is false. It’s not exactly edible, and it may make you a bit queasy, but its deadliness is a myth.

13. Organic fruits and vegetables are safer and more nutritious.

It has been widely believed for the past several decades that organic foods are both safer and more nutritious than conventionally grown foods. There are valid reasons why organic may be a better choice for the consumer, chiefly the negative environmental impact that conventional farming has on the soil and water, and birds and wildlife. However, safer and more nutritious are not among the reasons to go organic. Organic food, contrary to popular belief, is not necessarily pesticide-free. Many organic foods are grown using natural pesticides that are as unsafe to the human body as chemical pesticides. And in any event, the amount of pesticide residue on both organic and conventional foods is tiny and safe for human consumption. Meanwhile, almost 100,000 studies were reviewed on the nutritional content of organic, and the consensus is that organic has no more nutritional value than conventional.

14. Dropping a coin from the Empire State Building could kill a person.

A coin dropped from the height of the Empire State Building, or any tall skyscraper, will gain quite a lot of speed, up to 50 miles per hour, but the most it will do is cause a wicked sting. No manslaughter charges need be filed.

Sure it does. The same Empire State Building you dropped the coin from suffers around 100 lightning strikes a year.

While it is true that if you are taking a bath and you drop a live electrical wire into the tub, you are in for a hot time, the real truth is that pure water is a poor electrical conductor. The reason we are shocked in our water is that regular tap water contains lots of other stuff, like dirt, minerals and the like, that are conducting the electricity.

17. Diamonds are formed from coal.

Many of the comic nerds among us fondly recall scenes of Superman squeezing a lump of coal and turning it into a diamond. Unfortunately, the science is a little off. In fact, diamonds are formed about 90 miles deep in the Earth, made from compressed carbon. Coal is only about two miles down.

18. People in the Middle Ages thought the Earth was flat.

Maybe way, way back this was true, but by the Middle Ages, most learned people believed the world was  round. Certainly Columbus knew his trip was fraught with danger, but falling off the Earth wasn’t one of his concerns.

19. Carrots give you better vision.

Carrots contain lots of vitamin A, which is an essential nutrient for the eye. Not getting enough vitamin A will certainly impact the health of your eyes, but there is no evidence that eating lots of carrots will improve your vision.

20. Hair and nails grow even after you die.

Once you die, your biological processes cease. No more growing. This myth appears to be due to the fact that the body dries out and shrinks after death, making it appear as though the nails and hair have grown.

This myth is 100% wrong. People use all their brain. The idea that an organ like the brain would evolve and be 90% useless is ridiculous on the surface. In fact, the brain is so active that although it comprises only 3% of body mass, it uses 20% of the body’s energy.

It’s true that the left side of the brain (which controls the right side of your body) seems to be responsible for processes like language and math skills, while the right side of your brain (which controls the left side of the body) controls things like spatial relationships and music processing. But the brain is an incredibly complex organ, and the simplistic notion that one side is dominant over the other is wrong. There are plenty of left-handed people (right-brained) who are analytical (look no further than the professorial Barack Obama), and plenty of right-handed people (left-brained) who are artistic. No scientific study has shown that overall right or left brain dominance is a real thing.

Human beings are comprised primarily of water, so keeping hydrated is certainly an important goal. However, there is no scientific study that has ever come to the conclusion that eight glasses of water is the magic number. People should drink water when they are thirsty, and water is preferable to calorie-laden sodas and juices.

The vacuum of space is cold in some places, like the furthest reaches of the universe. In other places, though, like in the sunlight near Earth, it can get quite hot. Like 250 degrees Fahrenheit hot.