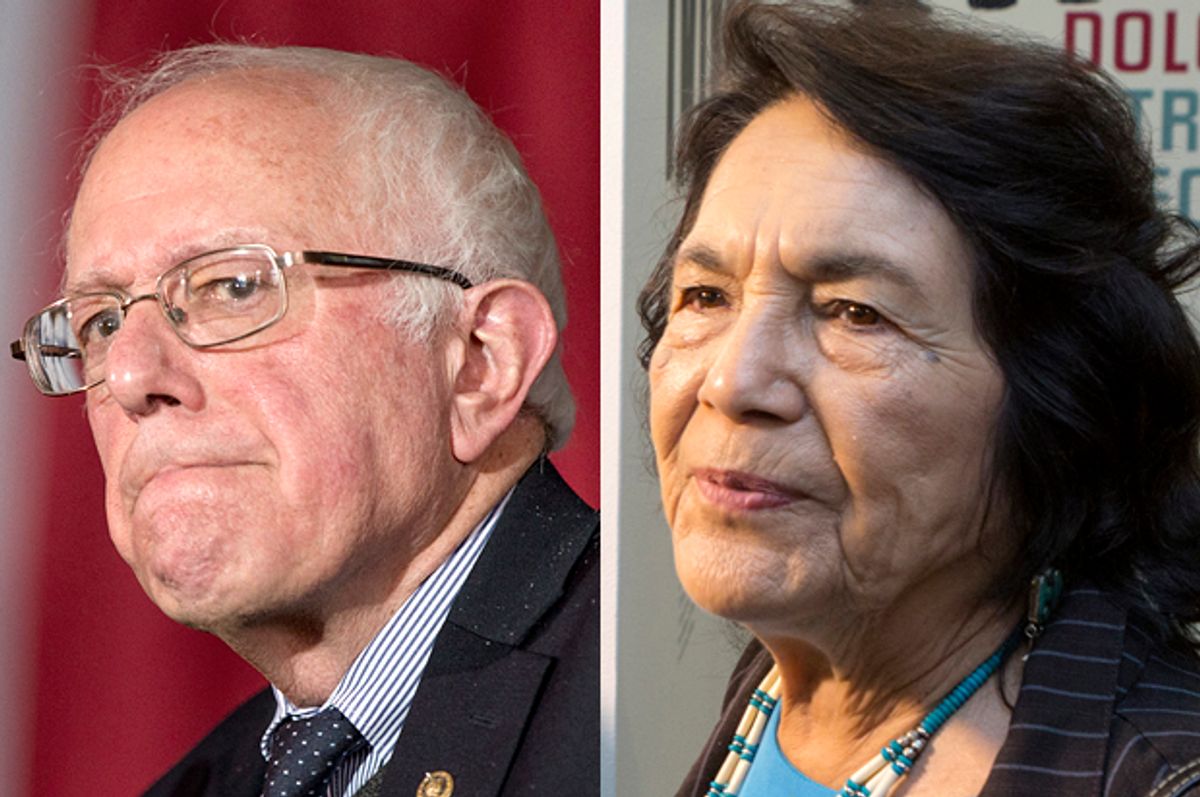 In the shadow of the Democratic caucus in Nevada, which Hillary Clinton won and Bernie Sanders lost, an ugly controversy erupted, riding on waves of increasing anger and passion on both sides of the primary. Dolores Huerta, one of the founders (along with Cesar Chavez) of United Farm Workers and an iconic civil rights and labor activist, took to both regular and social media to tell a disturbing story about her treatment at one of the Nevada caucuses, where she volunteered to translate the proceedings into Spanish when it was discovered that a translator wasn't provided.

I offered to translate & Bernie supporters chanted English only! We fought too long & hard to be silenced Si Se Puede! #ImwithHer #NVcaucus

The story quickly devolved into a pissing match over unknowable facts, but what is really fascinating about this story is why it's such a hot-button issue. After all, every campaign has moments like this, when passions are high, but this particular one has blown up out of control because of what it says about expectations placed on the Sanders campaign and how the Nevada loss shows that they're failing to meet them.

But first, the facts: With the dizzying swiftness of the social media era, two camps firmly entrenched on this issue: Clinton supporters tsking over the ugly behavior towards a woman who self-declared socialists really should have more respect for and Sanders supporters denouncing Huerta, and those who confirmed her story, for supposedly lying.

Adding fuel to the fire, Snopes, a site that is usually much more responsible about these things, rushed to declare Huerta's story as "false," on the basis of testimony from Sanders supporters Gaby Hoffman and Susan Sarandon. The article got widely shared, but it's atypically shoddy for the website, both because it treats Sanders supporters as more reliable than Clinton supporters and because the writer doesn't acknowledge that there's no way to know for sure what anyone is saying, much less chanting, since the audio is too noisy to make out anything but the rabble-rabble crowd noises.

A better, more fair-minded assessment of the facts can be found at The Washington Post, written by Janell Ross and Abby Phillip, who explain that most of Huerta's story can be confirmed by the video, even if the very specific accusation of chanting is unknowable, because of the noise.

"And unfortunately for Sanders's supporters, there's video that at the very least backs up Huerta's assertion that there was a lot of shouting and hissing while she was on stage at a Nevada caucus location," Ross and Phillip write.

Since jeering and hissing and cheering the words "English only" are indisputable, the focus of the online debate has been that Huerta must be a liar because of her use of the word "chanting." "NO CHANTING," Sarandon wrote.

"You lied about chanting," another Sanders supporter scolded Huerta.  All of Twitter appears obsessed with breaking apart the word "chanting," as if it's the make-or-break issue of the campaign.

The difference between "cheering" and "chanting" seems a strange hill to die on, but, as with most stupid election controversies, the anger here is more about what the story symbolizes than the actual facts in dispute.

Things are tense right now because the Nevada loss is starting to look like a devastating blow to the Sanders campaign. From the beginning, the biggest obstacle to the Sanders campaign was convincing voters that this was about serious change instead of a bunch of privileged people posturing about how radical they are.

It seemed, until Saturday, that the campaign had a real shot at this. Sanders is an articulate candidate who sells his ideas well, and the improved poll numbers and real inroads with voters outside of the privileged white guy tent were heartening.

Unfortunately, Nevada showed that the inroads just weren't enough. "He lost among women, blacks, nonwhites, and self-described Democrats," Charles Blow of The New York Times writes. Early reports that Sanders had outperformed Clinton with Latino voters proved unlikely, as caucus results show that Clinton won the more Latino-heavy precincts. The Sanders message of economic populism is not resonating with people of color, women, or union workers— the very people you need to convince people your campaign is a serious one and not the electoral equivalent of the white guy in dreads wearing the Che shirt playing guitar in the quad.

Under the circumstances, it's understandable why Sanders supporters would be a bit touchy about Dolores Huerta accusing them of disrespect. Huerta sits right at the intersection of three demographics — labor, women, people of color— that the Sanders campaign needed, and failed, to win over in order to convincingly argue that this is a real political revolution instead of a social signaling opportunity for people who want to be seen as radical.

So it's easy to see why Sanders supporters want to yell at Huerta. She's an easy punching bag for those frustrated with voters they believe should vote for Sanders but stubbornly refuse to do what Sanders supporters want them to do. (It's similar to way that older female Clinton supporters have gotten bossy with younger women who vote Sanders.) Painting Huerta as delusional, corrupt or a liar makes the loss of these voting blocs easier to swallow, because the alternative possibility, that Clinton voters know what they are doing, is too painful to contemplate.

The problem is that dog-piling Huerta is exactly the wrong way to go about appealing to women, people of color, or labor organizers. The accusations of lying are a stark reminder of how women or people of color have long been treated as more mendacious than white men, and the lack of respect for an iconic labor organizer calls into question if these self-proclaimed socialists have even a basic understanding of what socialism is, or the centrality of labor concerns to the very concept of socialism. (This isn't helped by the fact that the Sanders campaign is far more focused on middle-class benefits and Wall Street corruption than traditional socialist concerns like labor organizing or welfare for the poor.)

The attacks on Huerta also reinforce the very image that the Sanders campaign needs to get away from, which is that it's about a bunch of well-off white men who are more interested in pushing people around than creating a progressive coalition. Of course, the odds of Sanders actually winning now are incredibly low. The coalition didn't form and Clinton is on the path to the nomination. That we're seeing a shift away from trying to play nice to lashing out isn't too surprising, under the circumstances. But it's still disappointing to see would-be socialists attacking a scion of the labor movement in this way.