Facebook is not a charity: Mark Zuckerberg's "Internet for all" push is big business, barely disguised 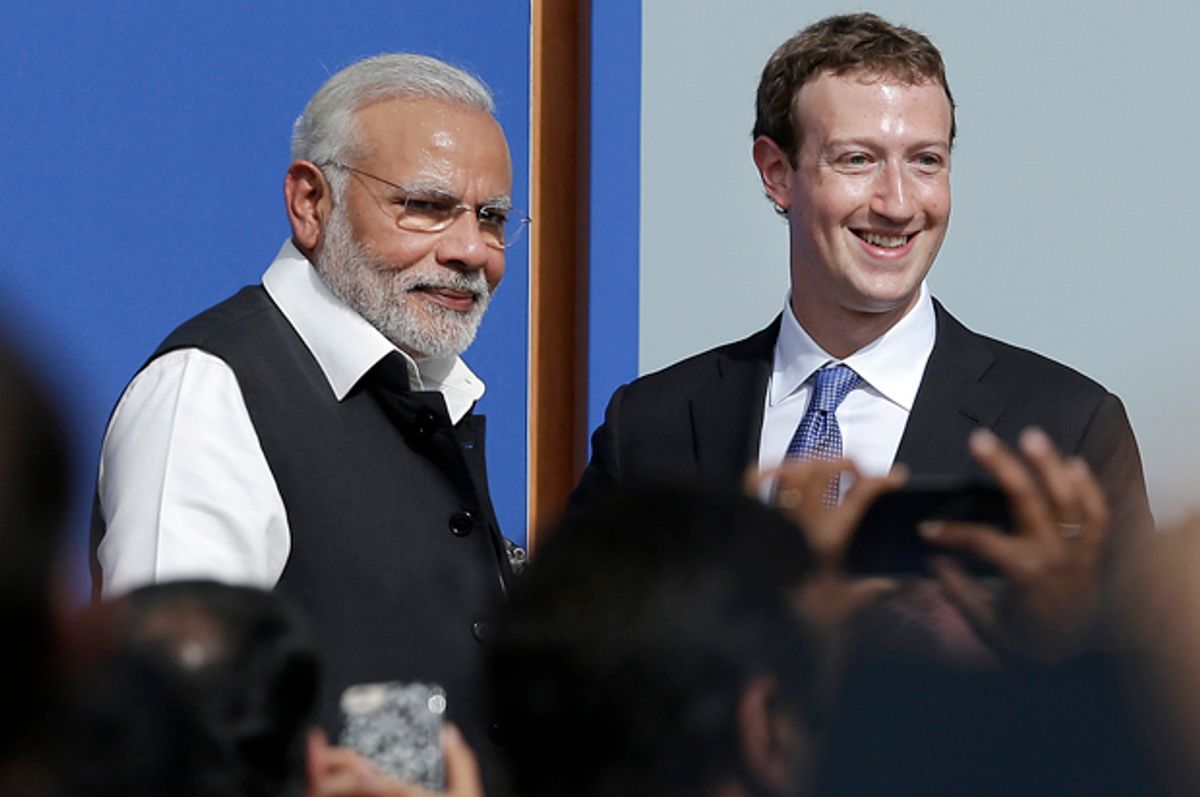 Tech titans have drawn good press in recent months. In December, Mark Zuckerberg pledged his and his wife’s fortune to charity – sort of. Apple chief Timothy Cook is now standing up to the U.S. government’s request to unlock a killer’s cellphone, which is has been a public relations hit as well as the right thing to do. If you were reading the news superficially, it might look like the tech community had turned into a big, friendly non-profit devoted to changing the world for the better.

But developments overseas reminds us that these companies – whatever their mix of good and bad qualities– are self-interested, for-profit corporations that aim to make money by expanding markets. And not everyone is eager to buy what they’re selling.

While the Mobile World Congress – an international event for the digital industry – takes place in Barcelona, Zuckerberg is expected to talk about the importance of Internet for all, a longtime obsession of his. But his plan for world domination – a service called Free Basics -- has already drawn resistance, most importantly in India. Billboard reports:

Free Basics enrolled more than 1 million Indians in its first year, according to Facebook's wireless partner, Reliance Communications. But critics, including many in the country's growing tech community, complained it was a predatory scheme: If low-income users couldn't afford anything besides Free Basics, opponents said, that meant Facebook was deciding which online services the nation's poor could use.

After the criticism, Zuckerberg opened up to a wider range of apps so he was not forcing Facebook on people the way U2 forced its album on iTunes users.

Zuckerberg also changed the program's name to Free Basics, after critics complained "Internet.org" sounded like a nonprofit, when it's part of a for-profit company (the overall campaign is still called Internet.org).

But opponents still worry that Facebook could change requirements at any time, force competitors to pay higher rates to get into the program, or even block services that run afoul of powerful politicians.

This might sound like paranoia, but Facebook has changed privacy settings for its U.S. service numerous times, passing names and cellphones over to other sites and apps. Your personal information can be shared all over the place. And while Facebook doesn’t – currently -- run conventional ads using member’s images, what do we do when they decide they want to?

The other issue: Does everyone in the world really need to be on Facebook? You can enjoy the service, as I do, and still be persuaded, as psychologist and technology researcher Sherry Turkle argues, that digital technology isolates people and limits real conversation. Social media and video games can destroy family life and erode the pull of empathy. And in traditional societies – some parts of these countries are urban and modern, but some parts are agrarian and far less tech-dependent – the impact is likely to be stronger. A Pew Research Center report shows that when the Internet comes to developing countries, it can improve education. But it often has negative effects on politics and morality.

Here in the developed world, the Internet has been a mixed blessing. It’s made some parts of life more fun and convenient. It’s also shut down bookstores and record shops, hurt the ability of musicians and photographers and journalists to make money, consolidated the already considerable strength of celebrity culture, and put lots of people out of work. And what about technology addiction, online bullying, and the rest?

Should people in Africa and India who have so far not been "disrupted" want to be? Some might, some might not. But do we want Mark Zuckerberg deciding how, when, and how much? A photo from the Barcelona event shows Zuckerberg striding past rows of people literally plugged into their computers: The image should make us all wonder what we’ve let him do to us. The Verge describes it this way:

A billionaire superman with a rictus grin, striding straight past human drones, tethered to machines and blinded to reality by blinking plastic masks. Golden light shines down on the man as he strides past his subjects, cast in gloom, toward a stage where he will accept their adulation. Later that night, he will pore across his vast network and read their praise, heaped upon him in superlatives, as he drives what remains of humanity forward to his singular vision.

There are plenty of good, public spirited people working for the large technology companies, and many of them want to make a difference on issues of literacy, poverty, and social justice. And Zuckerberg has surely grown up since his days at Harvard designing a program that rated girls on their “hotness.” But let’s pray that the criticism and resistance he’s meeting with in India continues. The Internet is not like democracy or the Red Cross – it’s more like the market economy. Like capitalism, it will make some things better, and other things worse, and the process needs to be handled slowly and carefully. Do we really want the titans of technology -- helped along by heads of state who smell money --  deciding whether the world needs their wares? Because I have a sneaking suspicion I know what they’ll decide.