Good riddance, Bush Dynasty! Why Jeb's disastrous campaign is a fitting end to a poisonous history

Jeb Bush left the 2016 campaign not with a bang, but a whimper, hopefully ending for good a sad chapter for America 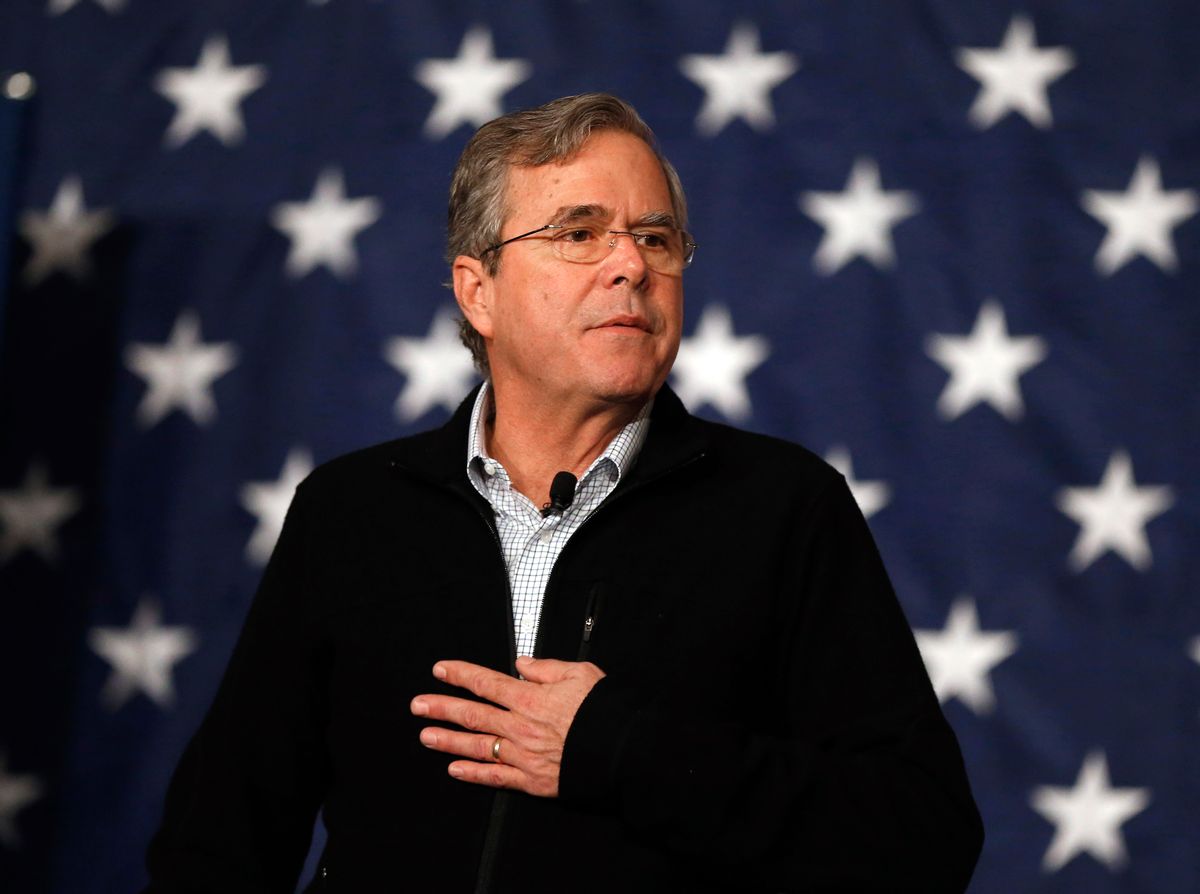 If there is any justice in the universe (I know, but let’s go with it), Jeb Bush’s announcement Saturday night that he was ending his campaign for the Republican nomination marks the permanent end of the Bush family’s presence in our national politics.

Can anyone think of another family dynasty that has had such a huge role in a particular stretch of American history, yet has almost zero hold on the country’s imagination?

The Roosevelt cousins Teddy and Franklin served altogether about five full presidential terms and had an outsized role in building and shaping the nation in the first half of the twentieth century; they are among the most notable personalities in our political history. The martyrdom of Jack and Robert Kennedy, and the tragedies that befell other members of their family, might have ensured them a place in our national mythos out of proportion to their actual impact, a fact that drives the right crazy. (There is a reason conservatives to this day still make snarling references to Chappaquiddick.) Still, there is an argument to be made that the Great Society legislation later signed by Lyndon Johnson had its roots in JFK’s administration (along with the long and brutal Vietnam War). And Teddy Kennedy was a consequential senator for over fifty years. His decades-long push for healthcare reform helped shove Obamacare over the finish line in his memory.

But the Bushes are in a class by themselves. Of the last nine presidential elections, a Bush has been on the Republican ticket for six of them, winning five. They have had a profound impact on the nation we see around us today, from George Herbert Walker Bush’s role in the Reagan administration and his waging of the Persian Gulf War in 1991, to George W. Bush’s eight years of incompetent, bumbling rule that left the nation with a stunning budget deficit, a financial crisis the likes of which we had not seen since the 1930s, thousands of broken military veterans, and foreign entanglements that we may never be able to untangle.

The Bushes are like the McDonald’s of political families. They have popped up everywhere for half a century, and damn near everything they offer is unhealthy enough to kill you.

But when you think of them, do you think of the glamor of Camelot, or stoic leadership in the face of great national tragedies like the Great Depression or World War II, or an outsized personality promising basic fairness to citizens, fighting for progressive reforms, and not letting something small like getting shot stopping you from giving a speech before seeking medical attention? Do you think of either 41 or 43 as legends? What are the tales we’ll be writing about them in our nation’s history books? A couple of wars, a hideous recession, and the infliction of Dick Cheney on the nation, an act for which W should never be allowed out in public again. These are not accomplishments that get your face carved on Mount Rushmore.

If it is the end for the Bushes, could there be a more fitting close than a member of the family blowing a boatload of money and good will on a hopeless campaign, the very nature of which befuddled him, and for which he seemed to be caught flatfooted, completely unprepared for the forces arrayed against the juggernaut he was so sure would roll over the opposition?

Because that was Jeb Bush for the last few months of his political career. Granted, almost no one saw Donald Trump coming. But a year ago, Bush’s nomination was supposed to be a sure thing. He was going to roll up huge amounts of fundraising. The RNC scheduled the primaries in such a way as to allegedly be advantageous to him. His name was supposed to be a plus for some reason. The Republican establishment, at least, seemed to think the Barack Obama that exists in the right-wing media bubble would fuel a nostalgia for the W years that would redound to Jeb’s benefit. God knows why, but no one ever accused Reince Priebus of being the crispiest French fry in the Happy Meal.

Others have noted the irony of Bush’s campaign ending in South Carolina, the home state of famed weasel Lee Atwater, who helped get George H.W. Bush elected with the despicable Willie Horton ad in 1988, and where a 2000 whisper campaign begun by Atwater disciple Karl Rove regarding John McCain’s alleged illegitimate black daughter helped W to victory in that year’s primary. But that has always been the Bush way: Let someone else do the vicious dirty work while you keep your hands clean. Or operate so far in the background, as Poppy Bush did while serving as Reagan’s vice-president, that you can mostly avoid the crap from something like the Iran-contra scandal splattering all over your loafers.

Jeb Bush never had his father’s knack for avoiding that spillage. Nor did he ever seem to really have any fire or passion in him for the presidency. You could see this on Saturday night, when he read his concession speech like he was giving a perfunctory toast at a Rotary Club dinner. When he awkwardly announced that he was happy to go home that night and sleep in his own bed with his best friend, his wife Columba, who was standing behind him, I half-expected a waiter to materialize onstage to put a plate of undercooked roast beef on the lectern.

That was Jeb Bush, whose campaign motto might as well have been “Sure, Why Not.” As always with the Bushes, one got the sense that the call to public service was not taken up out of some sort of great love for the nation or belief in their ability to make a difference. Elected office was just sort of there, and what the heck, someone had to sit in it.

It didn’t help that the party Jeb claimed to love, which had nourished his family for decades, had passed him by, had become not so much a political party as a toxic cloud of xenophobia and inchoate rage. Of course, a close observer could have seen that before he blew upwards of a max NBA contract on a presidential campaign that lasted less than a year, but the Bushes have always seemed so insulated from anything approaching reality.

As for the future, there is always Jeb’s son George P. Bush, currently serving as Texas land commissioner and occasionally mentioned as the family’s hope for continued political relevance. It’s hard to see how the GOP will ever again embrace the family name, but who knows? When your party is about to nominate Donald Trump for the presidency, all bets involving logic and reason are off.